WST had promoted this day as “Super Sunday” and it lived to be indeed a “Super” day of snooker in Belfast, with 13 of the top 16 in action and all of them winning their match. 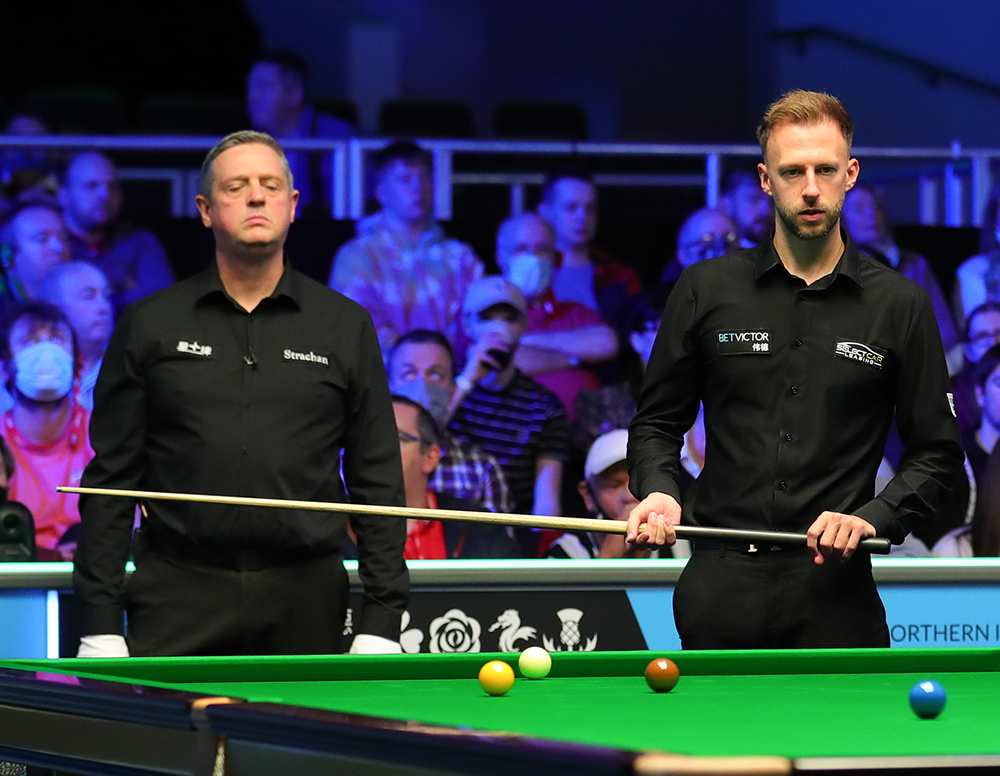 Defending BetVictor Northern Ireland Open champion Judd Trump got his bid for a fourth consecutive win in the event underway with a comfortable 4-1 defeat of Andrew Pagett at the Waterfront Hall in Belfast.

Remarkably Trump has lifted the Alex Higgins trophy for the last three years, beating Ronnie O’Sullivan 9-7 in the final on each occasion.

Bristolian Trump temporarily switched cue sport disciplines to try his hand at 9-ball pool in the US Open recently. Back in a more familiar environment, he wasn’t quite at his clinical best this evening and showed signs of rust in the stages. Welshman Pagett claimed an edgy opening frame.

The Ace in the Pack then stepped his game up a gear and composed breaks of 50, 65 and 79 on his way to four frames on the bounce to claim a place in the last 64. Trump now faces China’s WSF Junior Open winner Gao Yang.

Trump said: “It is tough in the first round. You are always edgy. I’ve not played in a tournament for what seems like forever. I’ve not been playing against anyone in practice, so it is hard to know where I am with my game. When you get out there, it is completely different. If you make mistakes at home on your own, it doesn’t matter. When you get out there you are punished. It was disappointing to lose the first frame, but the balls went a bit scrappy. In the end I am just happy to get the win.

“The atmosphere here is the top three of any event for me, especially when it gets down to that one table setup. I can feel the passion from the fans and that rubs off on me. Any kind of support like this, whether it is the Masters, German Masters or here, is brilliant. When you see the arena fill up here it is amazing.

“It was so different to this environment playing at the pool. When I am here everyone expects me to win or do well every time I come to the table. Whereas at the pool I was just able to enjoy it. If I am able to bring that sort of mindset over to snooker it would be good.”

O’Sullivan got his tournament underway with a 4-0 whitewash defeat of Stuart Carrington.

The Rocket coasted to the win in just 52 minutes this evening. He composed runs of 90 and 120 on his way to victory.

Despite holding a record 37 career ranking titles, O’Sullivan endured a barren campaign last season in terms of silverware. He reached five ranking finals, but couldn’t convert any into a tournament win. However, he is unconcerned by his wait for title number 38.

O’Sullivan said: “I have tremendous faith in my ability, that if I play alright I should have a chance of winning. If I don’t, I still should have a chance of winning. I’ve won a lot of tournaments not playing my best. I never question my ability. Winning tournaments is just a by-product of what you do. If you consider five finals a bad season, then that is quite a compliment.”

Mark Allen left his home fans elated by making the second 147 of his career – read more on that story here.

Neil Robertson eased to a 4-0 win over Barry Pinches with a top break of 95. Jack Lisowski made a 137 in taking a 3-0 lead over Ashley Hugill, and eventually won 4-3 with a 57 in the decider.

Stephen Maguire could face a battle in the coming months to keep his top 16 place as he currently lies 46th in the provisional end of season rankings but the Scot helped his cause by beating Steven Hallworth 4-2 with a top break of 75.

“I sat down and looked at the rankings the other day and the good thing is I’m looking ok in the race to the Masters – I would rather be sure of a place in that event than the Crucible, because I’ve always got a chance to qualify for Sheffield.

“I felt nervous today because it feels like the first tournament of the season, even though we had a couple of others over the summer. At 2-2 I wasn’t feeling good and my opponent looked favourite to win, then I won a long fifth frame to go 3-2 up and finished the match well.”

Mark Williams secured a battling 4-1 win over Mark Joyce despite struggling with gout, while local favourite Jordan Brown succumbed to a 4-0 defeat at the hands of Gary Wilson.

And here is Mark Allen’s reaction to his 147

Mark Allen described making a 147 at his home tournament as one of the best moments of his career after his fantastic maximum break wrapped up a 4-1 first round win over Si Jiahui at the BetVictor Northern Ireland Open.

Allen’s 147 was far from straight-forward as he ran out of position several times and had to play brilliant recovery shots. After potting the 15th black he left himself a tough yellow to a top corner, but slotted it home and cleared the colours. His local supporters raised the roof at the Waterfront Hall in Belfast as the final black went in. 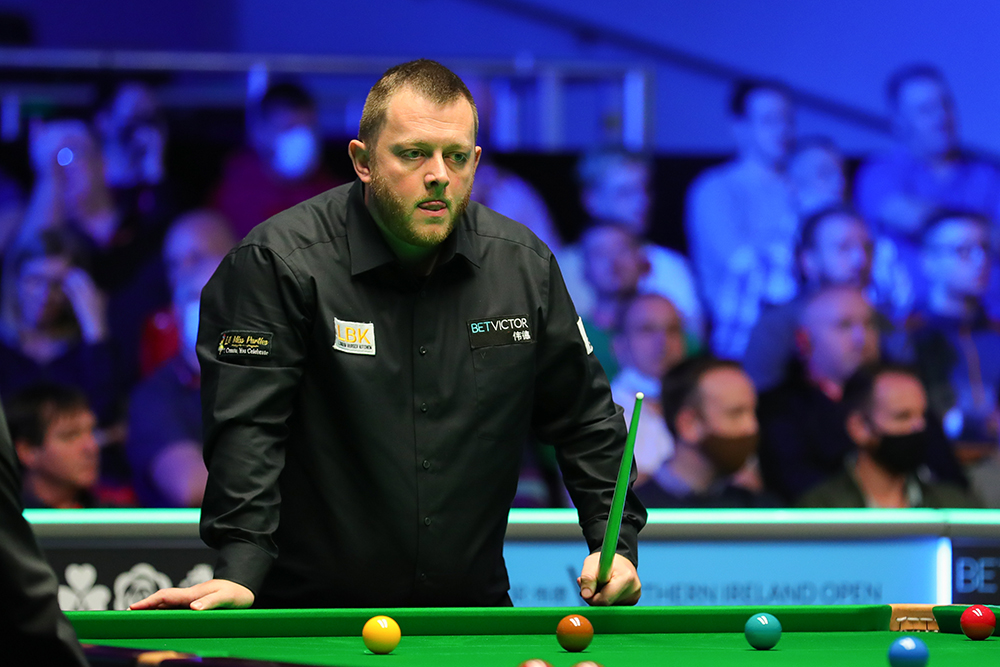 “It’s right up there with the best moments of my career,” said Antrim’s Allen, whose only previous 147 came at the 2016 UK Championship. “To do it here means so much to me, to give fans that buzz. It’s a memory I will hold for long time. I potted a good yellow, then a horrible brown. I couldn’t stop shaking on black, I just had to let arm go though and luckily it went in.

“I have made around eight or nine hundred maximums in practice. But it’s very nerve-racking to do it in a big arena. I wanted to do it for the fans because I have given them nothing to cheer for in the past in this tournament. I don’t think Alex Higgins or Dennis Taylor ever made a 147 here so it’s great to be the only Northern Irish player to do so.

“I was relaxed as ever pre-match. I played well and my safety was good. Even without the 147 I was happy with my performance. I have a target on my back every year here, whoever I play has the chance to knock out the home favourite.”

Allen’s 147 will earn him the £5,000 high break prize if it is not equalled. It’s the 170th maximum in snooker history and sixth of the season.

Mark Allen looked calm, and played the best I ever saw him play in his home tournament. The fans were respectful as well, which has not always been the case when he was playing here in the past. That said he was helped by Si Jiahui who, after a good first frame, made some unexpected mistakes and looked a bit frustrated.

Here are the last minutes of Mark Allen’s 147:

The Jack Lisowski v Ashley Hugill match was a strange affair, and, TBH, I found it quite painful to watch. Jack started well and found himself 3-0 in no time. He was cruising. But Ashley Hugill took control of frame 4 and turned it into a very slow going, disjointed, scrappy affair that seemed to last forever. He completely broke Jack’s rhythm. He continued in the same vein in the next .. and the next. It eventually came to a decider and, frankly, by that time, Jack looked gone; how he found something and won it, I don’t know. Don’t get me wrong, Ashley was doing what he had to do: he was trying very hard to win and found a way to derail Jack. But it wasn’t pretty and that’s an understatement.

You can read more about Ronnie’s match here

As for Jordan Brown, he has, so far, never confirmed the quality he showed to win the 2021 Welsh Open and he was poor again yesterday.