Mark Williams and Neil Robertson emerged the winners at the end of the first day at the 2022 Masters.

“Willo” beat the defending Champion, Yan Bingtao by 6-4. It was an excellent, entertaining  match. Both played well. Both got support from the fans. Williams had luck on his side: he benefitted from two massive flukes at key moments. 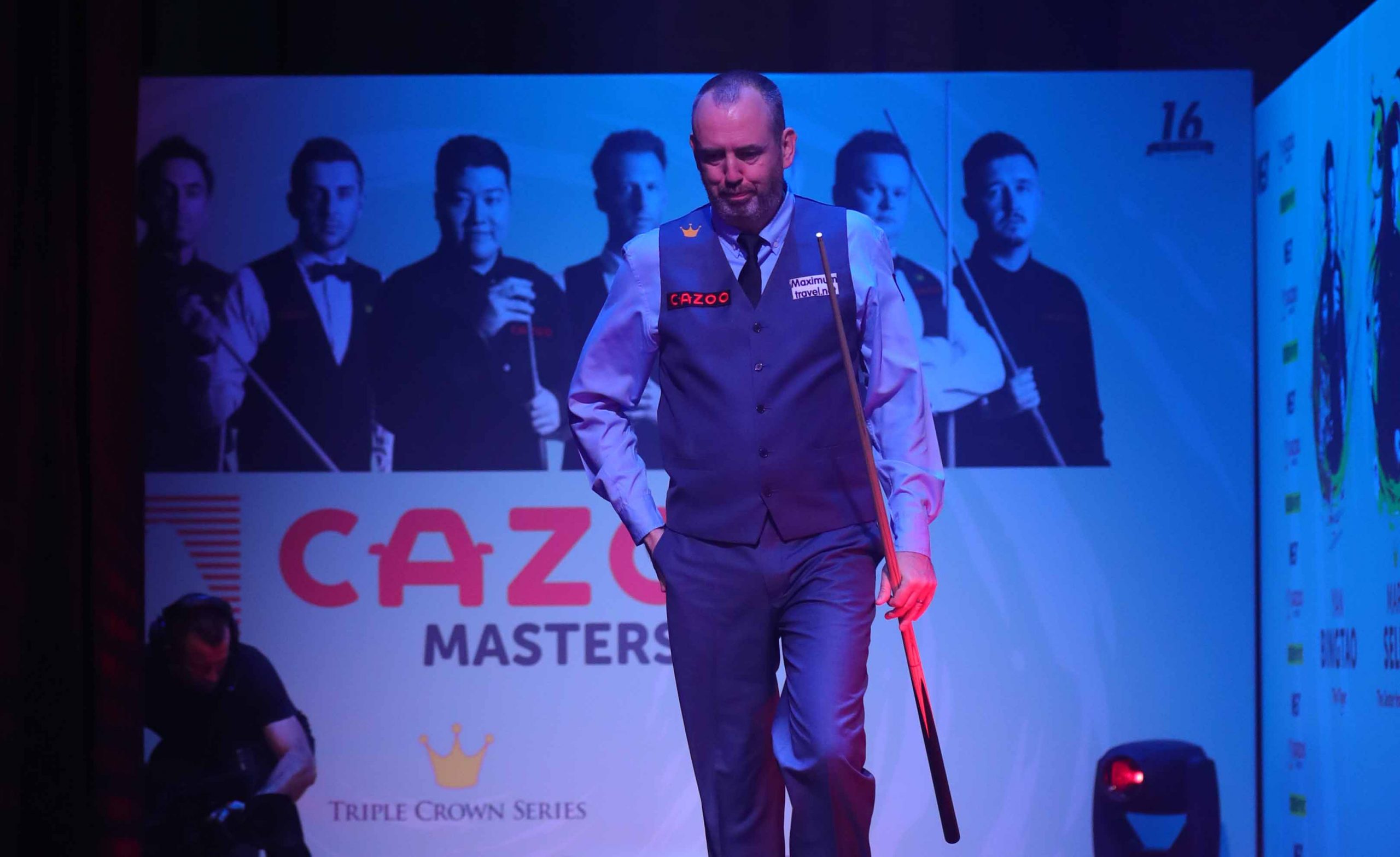 Mark Williams hailed Alexandra Palace as the best arena he has played in, after beating defending Cazoo Masters champion Yan Bingtao 6-4 on day one in North London.

The Welshman is competing at the Masters for the 24th time this week. He famously won the first of his two Masters titles 24 years ago, when he defeated Stephen Hendry 10-9 on a re-spotted black in the decider. Next up this week he faces either John Higgins or Zhao Xintong in the quarter-finals on Thursday evening.

Williams has had an up and down season so far. He started superbly by claiming his 24th career ranking title at the British Open, beating Gary Wilson in the final. Following that win he has suffered difficulties with both gout and Covid-19 and his deepest run saw him reach the last 16 of the Northern Ireland Open. On today’s evidence he looks to be back in top form.

Yan will be disappointed to exit his title defence at the first hurdle. The Chinese 21-year-old was making his Alexandra Palace debut this afternoon. He won the title on his maiden Masters appearance 12 months ago. The event was forced behind closed doors in Milton Keynes, where Yan secured a stunning 10-8 defeat of John Higgins to lift the Paul Hunter Trophy.

When play got underway, Yan showed no signs of early nerves as he fired in breaks of 64 and 71 to move into an early 2-0 advantage. Williams replied with a run of 63 to take the third and had the first opportunity in the fourth. However, he missed a tricky black on 15 and Yan stepped in with a frame winning contribution of 57 to lead 3-1 at the mid-session.

When play resumed Williams reduced his arrears by claiming the fifth in dramatic fashion. With Yan requiring a snooker on the pink, he left Williams in a tricky position behind the black. Williams proceeded to come off the side cushion and hit the pink, fortuitously potting it in a baulk corner to lead 3-2.

Yan refused to throw in the towel and kept himself in the tie with a superb break of 122. However, Williams wasn’t to be denied and sealed his 6-4 win after firing in a contribution 85. 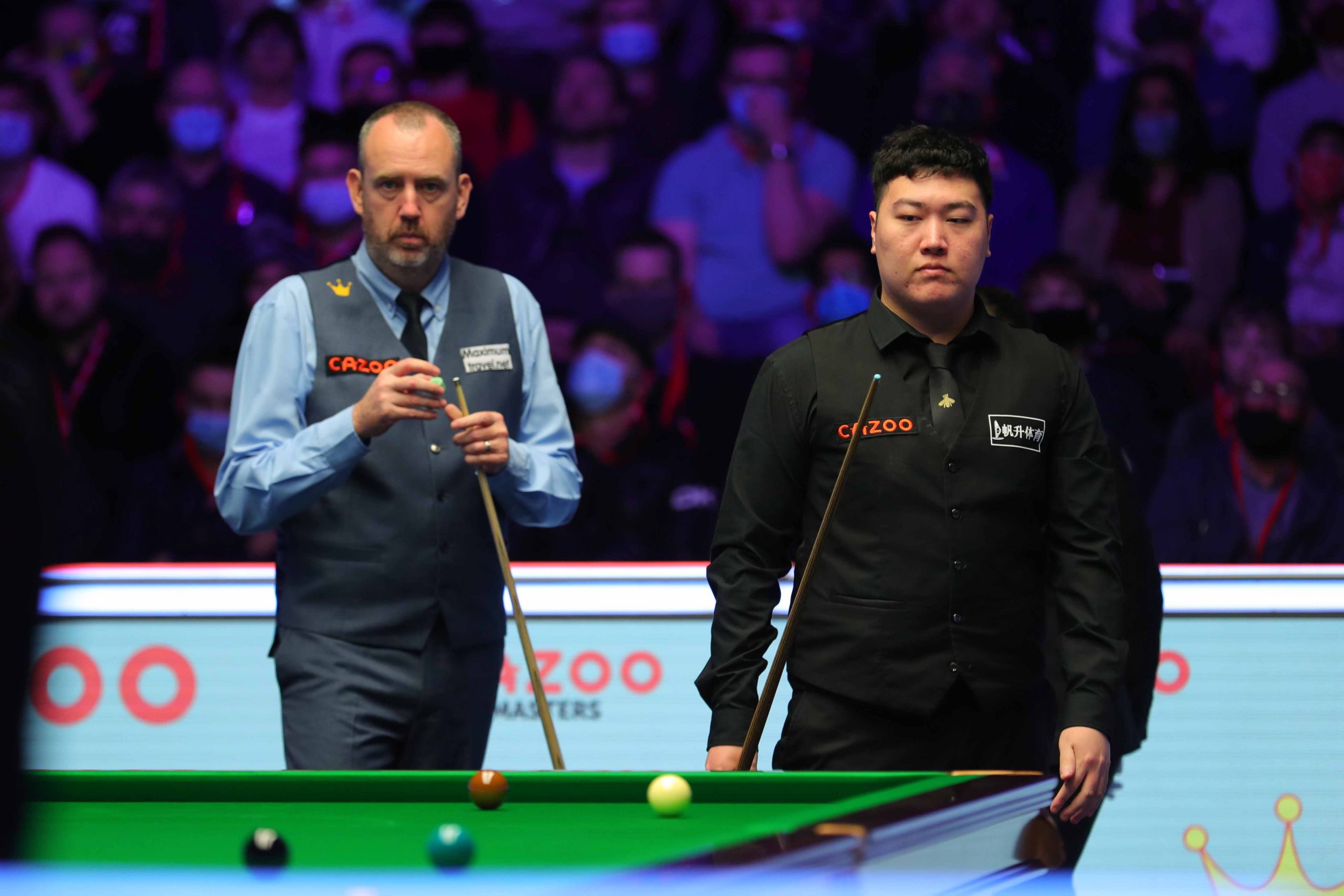 “This is such a hard tournament to win, especially when you have John Higgins, Ronnie O’Sullivan and Stephen Hendry about. It is just nice to be in these venues. The atmosphere was electric. I just have to enjoy it more, because I’m not going to keep coming back here year after year,” said three-time World Champion Williams.

“I didn’t think anything would ever beat the Wembley Conference Centre but I think now I have to admit this is the best venue we’ve ever played in. You have the big lounge at the back of the stands, the sofas at the other end. It is a massive arena and it is hard to generate an atmosphere like that. I don’t think you can.

Yan said: “We both played very well this afternoon. Mark was great today, he made every long pot and every difficult shot. I lost today but I am happy because I played well. That was the best I’ve played this season.

“I enjoyed it out there. I had a lot of pressure as it was very different to last year having 2,000 people watching the match. This was my first time at Ally Pally. Today I played well and I enjoyed the arena.”

I can’t remember seeing Mark Williams that animated and so moved by the crowd’s support ever before. It clearly still means a lot to him not matter what he sometimes says.

The second match was quite different, or, at least the first half was. I didn’t watch past the MSI because I really didn’t enjoy it, it was a poor match, and it was getting late here with the time difference.  Neil Robertson beat Anthony McGill by 6-3. 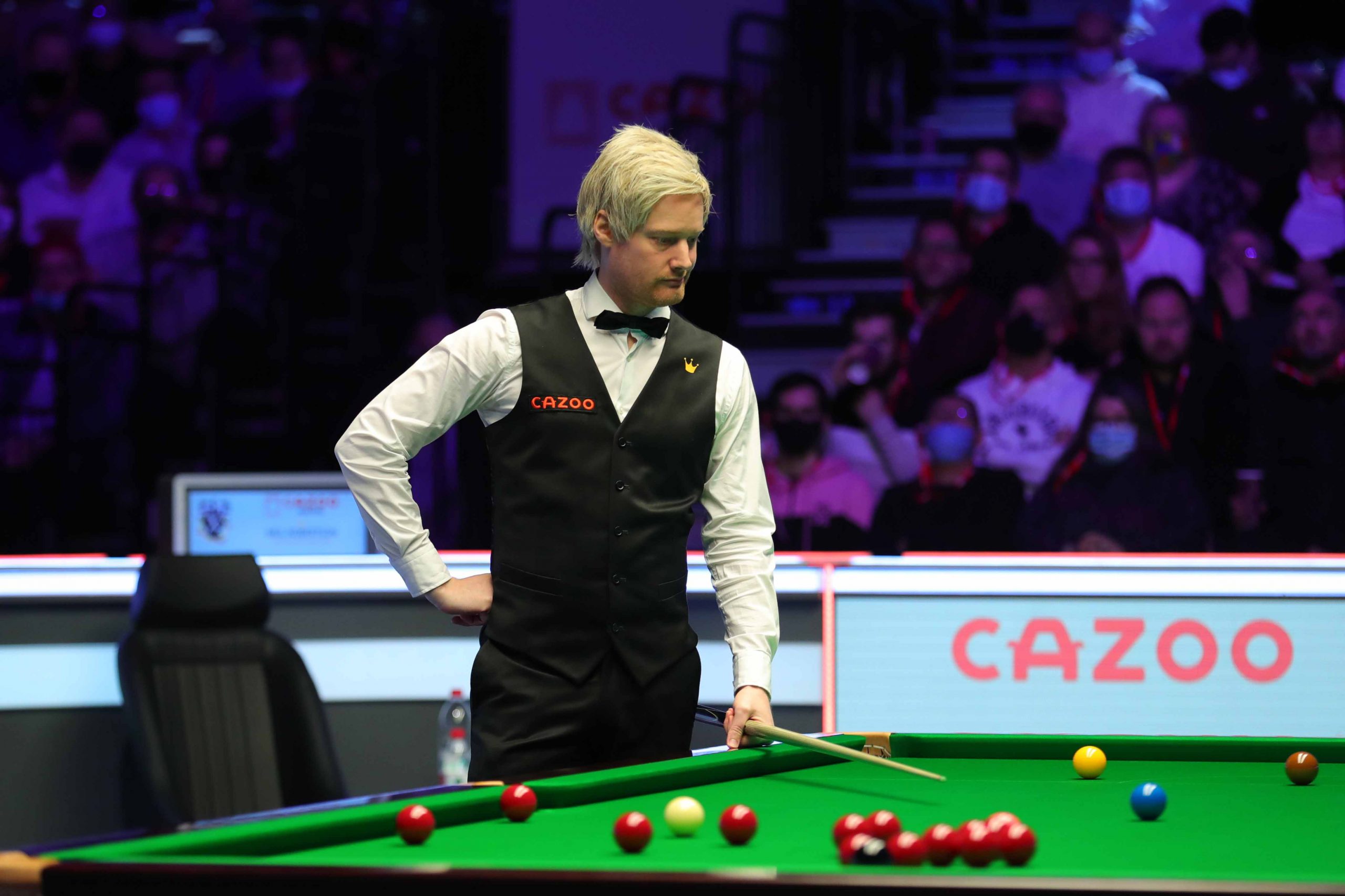 Neil Robertson put on a battling display to beat Anthony McGill 6-3 and clinch his place in the quarter-finals of the Cazoo Masters at Alexandra Palace.

Victory for Robertson ends a streak of two consecutive opening round Masters defeats, having fallen at the first hurdle in 2020 and 2021. The Australian was victorious nine years ago at Alexandra Palace, when he defeated Shaun Murphy in the 2012 final to secure the only Masters title of his career so far.

Robertson has been in fine form so far this season. He has already picked up silverware at the English Open, where he beat John Higgins 9-8 from 8-6 down in the title match. Robertson also reached the final of the Cazoo World Grand Prix before Christmas, but narrowly lost to Ronnie O’Sullivan.

Next up this week for 2010 World Champion Robertson is a quarter-final clash with either O’Sullivan or Jack Lisowski.

Scotland’s McGill remains without a match win at Alexandra Palace, having lost out to John Higgins in the opening round on his debut in 2018. He will now turn his attentions to a trip to Berlin later this month for the German Masters.

It was McGill who looked the stronger player in the opening exchanges this evening, with Robertson struggling to produce his pre-Christmas form. The Glaswegian moved 2-1 ahead, making breaks of 78 and 115 in the process. However, Robertson managed to restore parity heading into the mid-session, firing in a run of 75 to make it 2-2.

When play resumed it was Robertson who took the lead for the first time, a contribution of 94 edged him 3-2 ahead.

McGill drew level with a break of 75, but it would prove to be his last winning frame of the tie. Robertson blitzed to the line with three frames on the bounce, including runs of 57 and 62. 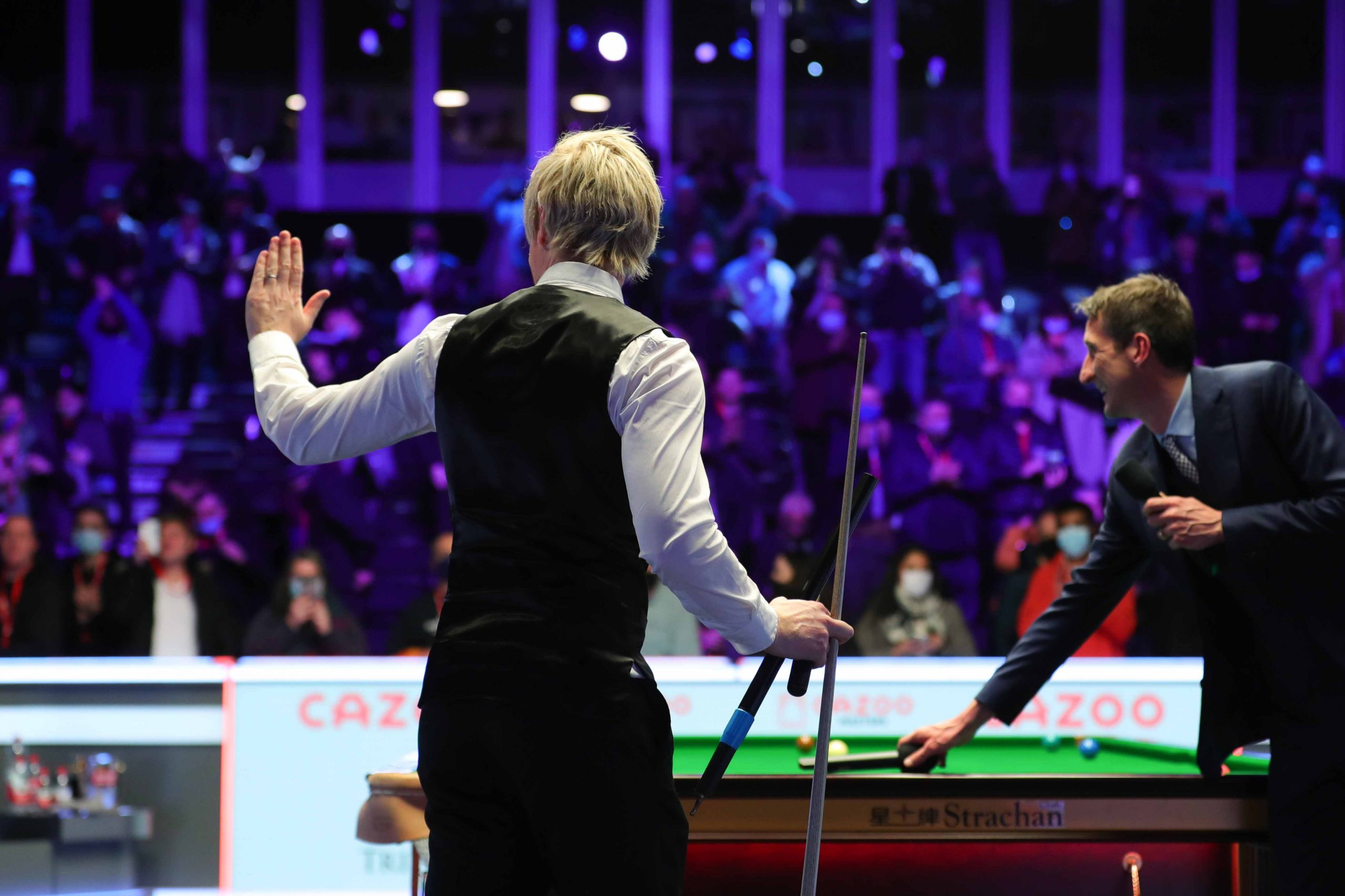 Robertson said: “Going into the interval I was singing and dancing, because I should have at least been a couple of frames down. Things improved in the next frame or two and from 3-3 to 6-3 I played some pretty good stuff. My long game got a lot better and I fed off the momentum of the crowd, who started getting behind me.

“The only other atmosphere I could compare this to is the one table setup at the Crucible, but even then I don’t think it is like this. This was rowdy and they weren’t afraid to show their displeasure in some of the safety or the frames taking too long. That is a good thing as they want to be entertained. They’ve paid a lot of money to be here and without the fans having the courage to come here with Covid and everything it would be like last year.

“Coming through a match like that, where you don’t play well but produce the goods in the big moments, is a really good sign. I have a few days practice to hone everything and get things where they should be. I had too much time off over Christmas. I spent two weeks in Norway, which was amazing, but I should have made the more selfish decision and come back early. I got away with it a little bit today. Hopefully I can play really well next match.”

I’m not a fan of McGill’s game: he tends to overthink, he’s often too cautious and rather slow. He should have been ahead at the MSI – Neil was all over the place – but wasn’t largely because he refused too many shots. Even Alan McManus said it in the commentary box and that means a lot because, whenever one of his Scottish pals is at the table, Alan tends to lose his “neutrality” in commentary, and “sides” with his fellow countryman. Alan is an excellent commentator, with fantastic insight and knowledge, but that “trait” annoys me, just as Phil Yates annoys me when commentating on one of his favourites (Trump and Hendry in particular).