Skip to content
HomeThe 2021 Welsh Open – Reactions from both finalists.

The excellent Phil Haigh spoke to both finalists after their match… here is what they had to say:

Jordan Brown: I’ve been critical of Ronnie O’Sullivan but he’s changed my opinion of him

Jordan Brown secured one of the most remarkable victories in snooker history on Sunday night as he beat Ronnie O’Sullivan 9-8 to win the Welsh Open and it has change his life, his bank balance and his opinion of the Rocket.

The 33-year-old had never been to a ranking semi-final before this event and only once made a quarter-final, which is why the bookmakers were happy to offer odds of 750/1 on him lifting the trophy at Celtic Manor.

The Antrim Ferrari showed sublime quality and incredible nerve over the week, winning five matches in deciding frames and downing Mark Selby in the last eight before thrashing Stephen Maguire in the semis to set up the showdown with O’Sullivan.

Brown was briefly on the tour over a decade ago and only returned in 2018, with his lack of experience illustrated by the fact he had never played the Rocket before Sunday night in Newport.

However, it mattered not that he was taking on the world champion for the first time and contesting his first ever major final as he went toe-to-toe with the Rocket throughout and finally got over the line in the epic contest with a tremendous break of 74 in the decider.

Jordan was taking on an idol in Ronnie, which makes the achievement all the more incredible for onlookers, but also all the more special for him.

‘He’s the greatest of all time and his speech there at the end meant so much to me, coming from him,’ Brown told Metro.co.uk. ‘You could tell he genuinely meant it. We all know what Ronnie’s like, he’s a bit temperamental, but for someone like him to do that there is unbelievable.’

O’Sullivan told Rob Walker after suffering defeat: ‘I’ve enjoyed every minute of that today, I’ve had such a fantastic time, loved playing Jordan, he’s a great guy, he really is.

‘I’m so happy for him to win, he’s a lovely guy and a fantastic player.

‘You don’t beat Selby, Maguire and I played alright tonight, not many people beat me when I’m playing alright so he’s a proper player, you know.

‘Fantastic for Jordan, his night and you couldn’t be happier for him.’

Brown also revealed a nice moment the two men shared after the final ball was potted, explaining: ‘He said he really enjoyed the match and I thoroughly deserved it, great break in the last frame.

‘All I said to him was that it was an absolute honour to play against him. He said, “thanks but no, really you definitely deserve it and great match.”‘

O’Sullivan’s class in defeat has turned round Brown’s view of him after the Northern Irishman admitted he had been both annoyed and motivated by the Rocket’s comments at the 2020 World Championship.

The six-time world champ said at the Crucible last year that he would have to lose an arm and a leg to drop out of the world’s top 50, which ‘didn’t go down well’ with Brown who was lower down the rankings than that at the time.

The Antrim star has proved that there is immense quality further down the rankings and is also happy to change his view of the Rocket after not seeing him in the best light recently.

‘It did annoy me, but it just spurred me on because I just wasn’t having that,’ Brown told Metro.co.uk of O’Sullivan’s comments.

‘I’ve been very critical of Ronnie, especially recently because I’ve always looked up to him and when he’s making comments like he did, you think to yourself, “What’s he like? Why is he getting on like that?”

‘He’s not proving himself to anybody, he should be the role model, the benchmark for everybody else. I just think he lets himself down.

‘But I’ve sort of changed my opinion of him today, you could tell that was genuine at the end, so thank you to him.’

Brown’s remarkable story has seen him climb to these new heights after nearly giving up the game in his late twenties as he worked in a petrol station and struggled for motivation and any form of success.

He believes his journey has helped develop the immense bottle he showed, not only in the final, but in all five matches he won in a deciding frame over the Welsh Open, with another of those coming against the iron-willed Selby.

‘It makes you even more determined because I’ve hit rock bottom at times in the past,’ said Jordan. ‘There actually was a time when I genuinely wasn’t going to play the  game anymore, so to think of that and now is unbelievable,

‘I can’t quite believe this is all happening. I’m just an ordinary lad who loves to play snooker and is lucky enough to be playing it for a living.’

There was an incredible outpouring of congratulation and joy for Brown from his fellow players after his stunning win, with dozens of professionals sending him their best wishes on social media.

The down to earth, unassuming character ruffled plenty of feathers with his performances at Celtic Manor, but he is not out to do that away from the table, and he feels that is why people are pleased for him to do well.

‘I think I just give a good impression,’ he said. ‘I don’t really have any enemies in this world, I’m a genuine, nice lad,

‘I always  get on with anybody, don’t like to get myself in any trouble, don’t fall out with anybody. I think I give that impression out there, I’m just laid back as well, in general. I think that helps.’

The immensely likeable Brown was self-deprecating even after the sensational achievement, suggesting that anyone would have been out of their mind to take the bookmakers up on their 750/1 pre-tournament price on him.

‘It should have been 10 times that!’ Brown said. ‘They would have been mad to even have a pound on me, they might as well have thrown it down the drain.’ 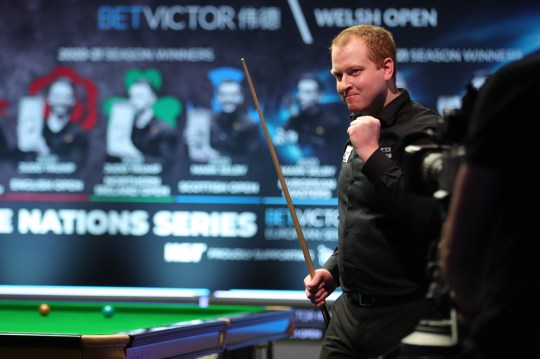 Clearly that did not turn out to be the case as he became the longest-priced winner of an event in snooker history and anyone who had fancied a flutter on him would be very thankful they did.

The £70,000 Brown earned himself this week is by far the biggest prize of his career, providing him a level of wealth he has never experienced and did not see coming so soon after turning pro in 2018.

He is not a man likely to get too big for his boots, though, and thanks to going through the toughest times just a few years ago, he is already focussed on the sensible option.

‘Even before today it was life-changing,’ Jordan said of his significant prize money, boosted by qualification for the Players Championship and Champion of Champions.

‘I was thinking to myself, “my God, I’m going to be sitting next Friday with five figures in my account!” I’ve never seen that amount of money before.

‘It’s going to take a while to sink in because I’m not going to know what to do with it, it’s so much money.

‘It’s going to set me up for a long time, I’m one of those people that will be responsible, investments and stuff like that. I’m absolutely not going wild, I’ll be very good at looking after it.’

After his performances at Celtic Manor, Brown can expect plenty more return on his snooker investment in the future.

Ronnie O’Sullivan had nothing but praise for Jordan Brown after his stunning victory in the Welsh Open final on Sunday night, glad that his comments have helped spur the Northern Irishman on to success.

Brown completed a miraculous run at the Welsh Open this week by beating the Rocket 9-8 in the final at Celtic Manor in dramatic circumstances.

The 33-year-old came into the tournament with odds of 750/1 to lift the title but pulled off a string of upsets, including beating Mark Selby in the quarters and Stephen Maguire in the semi-finals.

After downing Maguire, Brown was faced with the prospect of taking on the Rocket in the final and was relishing the prospect after admitting he had been annoyed by O’Sullivan’s comments at last year’s World Championship.

Ronnie said he would have to lose an arm and a leg to drop out of the world’s top 50 and Brown, who came into this event ranked number 81, said they ‘didn’t go down well’ with him.

O’Sullivan insists they were comments meant to inspire players, though, and after his nail-biting loss in Wales, is glad Brown has used them in the best way possible.

‘He’s gone: “You know what, that’s what I needed to hear to motivate me.”

‘It’s worked for me in the past when people have doubted me and knocked me, I’ve just gone, “lovely.”

‘It’s the best inspiration you can get sometimes, so I’m looking for someone to knock me again.’

Brown has had a circuitous route to a ranking title, nearly giving up the game in his mid-twenties and only coming back onto the tour in 2018.

The Antrim Ferrari was then just one match away from dropping off tour last year before qualifying for the World Championship and turning his career around before surging on to this remarkable success.

O’Sullivan, despite the loss, is delighted for his conqueror, saying: ‘I don’t know  Jordan well enough to know his complete story but I’m over the moon for him to have got that victory today. How can you not be pleased for him?

‘I really enjoyed it, I really did, a good match to be involved in.

‘I was good, I could have been better, but I’ll take that game, scored okay, played some good safety. I’m not disappointed about how I played.’

O’Sullivan was remarkably chipper despite losing in a deciding frame of a ranking event final and insists he doesn’t get down about snooker matches anymore.

‘Listen, I’ve got my finger in quite a lot of pies now,’ he said. ‘This is one pie of seven or eight,

‘I’ve had a great week this week with some of the other fingers stuck in other pies. I’ve got to take the rough with the smooth, the snooker hasn’t been all bad.

‘I’ve had some other good stuff that’s gone on this week as well. I’m not just a snooker player now, I’m here because I want to be here and I’m playing just for the fun of it, which is a nice place to be in.’

O’Sullivan won his first ranking event title all the way back at the 1993 UK Championship and recalls what he did after, as Brown, a bit depressingly, celebrates his maiden ranking crown alone in a Newport hotel.

‘I think I went home, stopped off in a service station and got recognised for the first time, that was pretty cool,’ said Ronnie.

‘He can drink some beer out of that trophy, I’m sure he’ll enjoy it.’

So good to read … especially as opposed to the nasty reactions from some.