Is the new tour Jason Francis is planning with Ronnie coming June and July. Some very special limited items will be available ONLY on those nights, commemorating the “1000 centuries” achievement.

Jason is looking for clubs able to host those “Nights”. Here is what he posted on social media. If you are a club owner and interested please contact Jason. If you are a fan and want to go to one of those events … DO NOT contact Jason. Places and dates have not yet been organised. When they are I will publish all the info on this blog.

If your club fancies staging one of our ‘A Night of 1000 Centuries’ Ronnie shows then please email me as I will have some dates in June and July. @ronnieo147 maximum audience of 200 so very intimate and allows Ronnie to meet EVERYONE email info@snookerlegends.co.uk 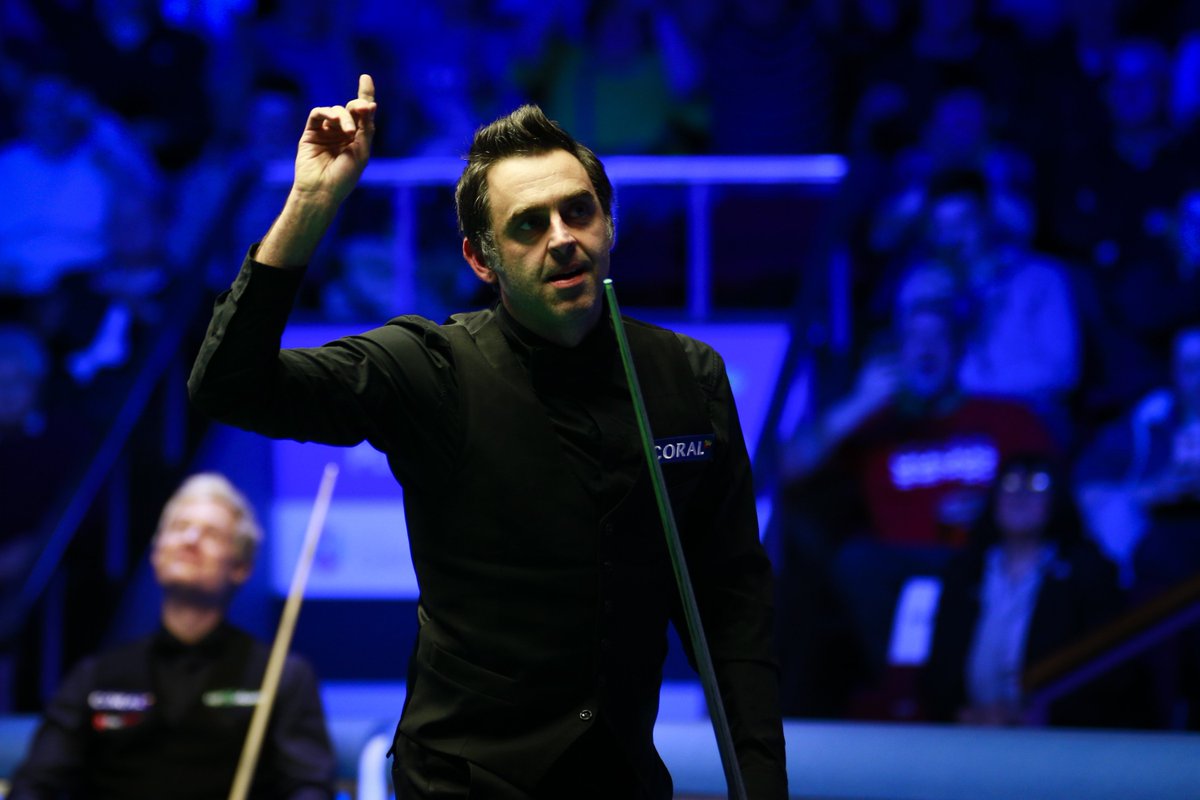 Looking forward to it!

On  10 and 11 April we had the WSS ROKiT Seffield Masters 2019 at the Crucible theatre.

This event is part of the “Seniors Tour” and was won by Joe Johnson.

Everyone was happy for Joe after what happened last year. Indeed during the launch dinner last year, Joe collapsed and if it wasn’t for the prompt and competent care he received from the medics, he wouldn’t be with us today, let alone a tournament winner.

All the results and pictures are available here.

Aside from the main competition, this event will also have sessions featuring Women Snooker players and Disability Snooker players. Not to be missed!

Yesterday, 12 April, Ronnie did an exhibition in Mansfield.

The day before he had come on twitter and Instagram, saying that he was practicing and “at it” again. Well apparently being “at it” meant this: heavy scoring. Indeed in nine frames, Ronnie had six centuries, the top one a 134, and two 90+ breaks. He must have had a lapse of concentration somewhere … 6+2=8 ?

Anyway, going by the reactions on social media, people had a good time. Here are some images that were shared on twitter:

And one of the matches is now on youtube:

Apparently Ronnie and Jason are working on new merchandise items celebrating the 1000 centuries.

The second item has all the dates on it… but they have a slight problem: counting the centuries, based on Ronnie’s list, the 134 he made to win in Preston was in fact century n°1001! Where is the rogue one? This illustrates an issue all statisticians of the sport have: in early days, nobody was keeping proper, well documented stats. Cuetracker.net for instance, credits Ronnie with less centuries than the official body does because Ron Florax, being extremely thorough, only accepts the centuries he can properly document, and information is hard to find for some older events, in particular team events like the Nations Cups for instance. Also some events, although sanctioned by Worldsnooker were not played on tables that were certified to comply with the governing body competitions standards, therefore those centuries made in them shouldn’t be counted. This was the case for the “Kilkenny Master” in 2007, an event that Ronnie won, and where he made a 147, but that doesn’t count in his official tally of maximum breaks.

Finally the World Championships 2019 qualifiers are underway at the English Institute of Sport.

Those are the results of the first three days:

According to what transpired on social media, it was another great night, with Ronnie having 6 centuries in 8 frames he played…

He also gave the fans plenty of time.

This is a short video that was shared on twitter:

This was Ronnie’s reaction – on twitter – to the night

Great night at Hartlepool last night, thanks for everyone who came out to watch, top crowd,

I was on good form last night, and I don’t think it can get any better then that

And when asked if he had a 147, he answered this

No, but some super snooker was played, cue ball was inch perfect all night

that’s what I love about this game

Ronnie was in Gateshead yesterday for the second night of a three stands tour.

This is what happened, as reported by Jason Francis on twitter:

8 frames made 4 tons on the bounce then 85 and finished with his 5 th ton a brilliant 147 maximum genius. Hartlepool tomorrow

Those images were shared on social media.

and this was Ronnie’s reaction:

Amazing crowd tonight in Gateshead, it was a pleasure to have the opportunity to perform for you all, and such friendly people, big up to the northeast

Also  this video emerged from Ronnie’s performance yesterday in Halifax, thanks to krdlr who found it!

I know that Christmas is still very far away, but be sure to put this one in your agenda. Remember surplus proceed to World Disability Billiard and Snooker. You can have fun and help others in need, isn’t that great?

Just a little reminder of what happened the last times similar events were run in Lincoln!

Ronnie had a “sandwich” …

And there was a great Q&A session too

Images taken at the events last February can be found here and here.

This time it will be Jimmy White and Dennis. Come along!

Ronnie won the last leg of the Irish tour 2018 in Belfast yesterday evening, beating Mark Allen by 5-1 over the whole series.

Big thanks to Conor O’Boyle the organiser, who kept me updated throughout. Much appreciated!

Here is his report on what happened yesterday evening:

Hello! Yeah, absolutely amazing. Mark started off with a century against Stephen Dempsey, and Ronnie then knocked in a century against Robbie McGuigan (Mark Allen’s stepson who had a maximum in practice and is only 13). The match then started with Ronnie taking a 3-1 lead. Ronnie had two centuries. After the interval Mark had back to back centuries to level at 3-3. Mark got in first in the 7th frame and broke down on 47, Ronnie cleared with a brilliant 78. The next frame Ronnie potted a great long red and made a maximum, incredible. He potted two plants during the break to keep it going including an extremely difficult one to the middle pocket early on in the frame. Pure class and I have the full video on my Facebook page

And he also kindly shared those pictures:

as ell as another version, from a different angle thanks to Silvry!

And another short video found by Rodkor, sampling the atmosphere at the event

And this concludes a fantastic series of exhibitions …

Ronnie was in Clacton-on-sea, in Essex, yesterday evening for an exhibition. That’s close to home and his father and his son were there with him. The Pot Black club is very, very nice and, at bit bizarrely, situated just above an “Arcade”. Going by little videos shared by Ronnie Senior, Ronnie Junior and John Virgo had some fun there with some car driving simulation game…

The owner of the club, Aidan Owens, is a very good player, competing on the Seniors Tour and currently in the top 16 amateurs there. He’s beaten Ronnie twice on his own table before Ronnie got one back. I wonder what happened yesterday…

Well I got the answer thanks to Ben Sizer, a young player who played Ronnie himself yesterday: Aidan sent his wife at the table to play Ronnie!

For all that transpired it was another great fun night, Ronnie won all his matches and made two centuries (Jason confirmed).

Here are two videos shared by Jason Francis on Facebook:

more photos added by Aidan Owens on his Facebook Page