Judd Trump and Stuart Bingham were the last two players to get in to the Final Group yesterday. Here is the report by WST:

Judd Trump boosted his hopes of winning a record-equalling sixth ranking title of the season by reaching the final group stage of the WST Pro Series.

Trump topped his phase two group on Saturday by winning his final match 2-1 against runner-up Stuart Bingham. Both players join the final group on Sunday, with the player who finishes top to take home the trophy.

It’s a round robin format, will all matches best of three frames, and the action starting at 10am.

World number one Trump has already won the English Open, Northern Ireland Open, World Grand Prix, German Masters and Gibraltar Open this season, and now has the chance to equal the record of six ranking titles in a single campaign, which he set last season.

He lost his opening match today, 2-0 against Dominic Dale, but then won six in a row. His battle with Bingham came down to the colours in the deciding frame, and a safety error from Bingham handed Trump the opportunity to clear and top the table.

Ryan Day was also in with a chance heading into the final round of matches, having won four of his first six, but a 2-0 defeat against Mark Selby ended his hopes. 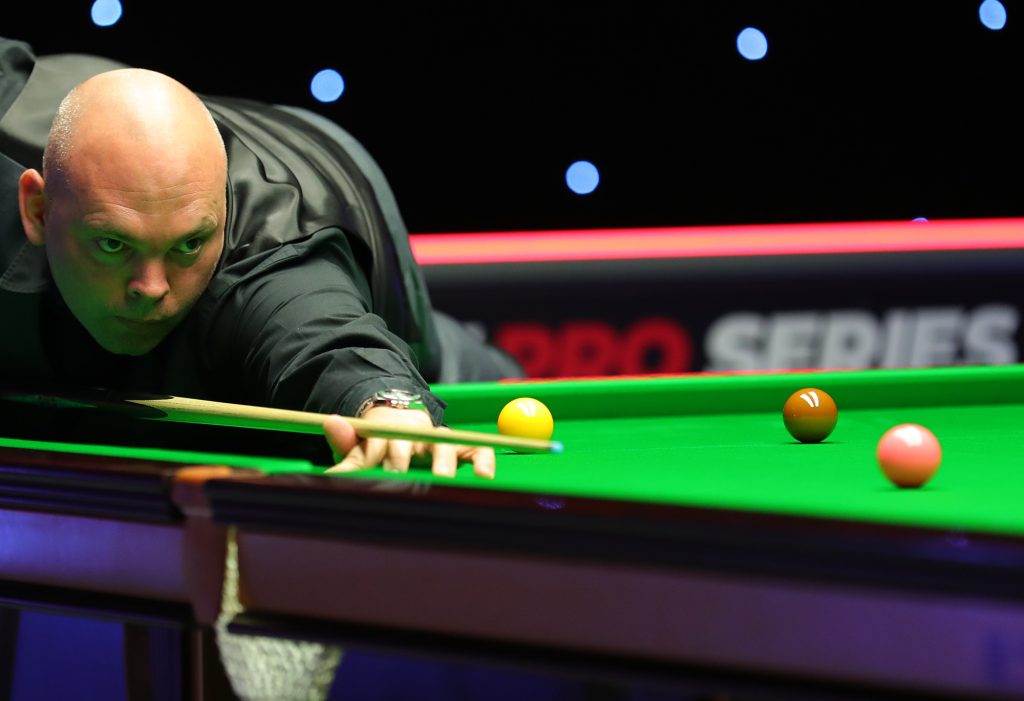 Bingham won five of his first six, and that proved enough for second place despite his defeat against Trump. The Basildon cueman needs to win the tournament to climb inside the top 16 in the Race to the Crucible otherwise the 2015 champion will be heading for the qualifying rounds in Sheffield.

“I played well today after a slow start, I felt really relaxed out there,” said 44 year-old Bingham. “It’s nice to be in the last group. It was tough today and it will be even tougher tomorrow. You’ve got to win games early in the day to keep yourself in the frame.

“I’ve got an outside chance to get into the top 16, I’ve just got the easy task of winning the final group! It would mean everything to do that and make sure I’m at the Crucible. If I play like I did today I’ve got a chance. If not, I’ll go to the qualifiers. I haven’t had to do that since 2010 and it will be two hard games. What will be will be.”

Paul yesterday commented on this blog, pointing it to me that I had overlooked the fact that snooker.org had already added the guaranteed 1000 points  for all the players who had aqualified for the final group. Therefore Jack Lisowski can only tie with Ronnie if he comes runner-up today. Depending on how WST proceeds with ties, the permutations I presented may remain correct or not. If they use their usual countback system, my permutations stand. That’s what they appear to do here too as Bingham can only tie with Mc Gill and the above article says that he would get the 16th spot at the Crucible. What remains correct in any case is that if either Kyren Wilson or Jack Lisowski win, Ronnie will end-up 6th in the Tour Championship seeding and would therefore play Neil Robertson and find himself in the bottom half, away from both Trump and Higgins until the final.

If Stuart Bingham were to win today, he would get into the top 16 ahead for the Crucible, at the expense of Anthony McGill. He would be seeded 16th. The Crucible seeding can still change, but as Jack Lisowski is the lowest ranked player in the Tour Champiomship, that tournament will have no impact on the 15th and 16th seeded spots.

Also, whilst WST is making a big thing of  Judd’s  possble sixth ranking title this season, Judd himself sees it differently as reported by Hector Nunns on twitter yesterday:

Judd Trump, in action today in the short format Pro Series, admits that equalling his history-making six ranking titles in a season by winning this best of three event would not count in his book