Yesterday evening Ronnie was in Peterborough to speak about his sporting life. Apparently it was another brilliant night. Not much filtered about that – for now – but before the show he took on twitter to express his views about the recent cases of possible match fixing.

This is the report on that by the BBC 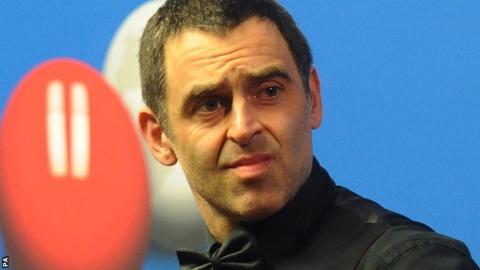 Former world champion Ronnie O’Sullivan says snooker’s governing body should look at the reasons for match-fixing instead of sanctioning players.

It comes after three players were suspended by the World Professional Billiards and Snooker Association (WPBSA) over match-fixing allegations.

O’Sullivan posted on social media: “The real question should be why do the players feel the need to do this?

“I’m not sure punishing the players is the answer.”

The latest players to be suspended by the WPBSA are former Welsh professional David John, along with Chinese pair Yu Delu and Cao Yupeng.

Matches involving the trio were investigated and they were found to have a case to answer.

They have been suspended until the outcome of formal hearings, which will take place at a venue and date to be confirmed.

All three players have the right to appeal against the decision.

“In terms of integrity, our governing body the WPBSA is setting an example to many other sports when it comes to detecting corruption, stamping it out and providing an appropriate deterrent to the players,” said a World Snooker spokesperson.

‘A players’ union is the only way forward’

Earlier this month, World Snooker chairman Barry Hearn said prize money would be increasing across the board and insisted that “we are seeing the prize money going deeper into the 128 pros”.

However, English five-time world champion O’Sullivan highlighted the expenses for players involved on the snooker circuit as an issue, saying they “kill the players ranked outside the top 16”.

“Maybe decrease the amount of small events and make the events you do have price-effective for everyone,” added the 42-year-old.

“Have more players if you like, but don’t put the players in a position where to make a living becomes unsustainable.

“Everyone eating is always a good thing in my book.”

O’Sullivan said he was “talking about why some players feel the need to fix matches”, adding: “Once you find out why, you can then try to make positive changes to stop it happening.

“Whatever you do, no player on the main tour should end the season minus £30,000, and, trust me, there are a high percentage that are.

“A players’ union is the only way forward. Players stick together and changes will happen, no players no game.

“Some players will stick but I know others who can be picked off. Divide and rule never works for the long term benefit of the all players.”

‘The majority of players are earning good money’

“Even taking into account expenses, the majority of players are earning good money.

“We have made huge progress over the past decade and we are committed to continuing this trend which will provide more earning opportunities for the players.”

The last two quotes are not by Ronnie. The last one is my reaction to the suggestion to lower the costs for the players by making the tour even more UK centric. This is typical and common amongst Brit fans, and players, who rarely think about what this implies for non UK players. To be fair to Ronnie he retweeted that post

Before coming back to the ones by Snookerbacker and Alex, I’d like to express a few thoughts. Worldsnooker of course will claim that most players earn good money. First I’m not sure if the amounts they cite are before taxes and the levy themselves take on the players earning, but I suppose they are based on the 2017/18 one year list . Well based on that – data published on the Worldsnooker website – 106 players, out of 166 in the list earned no more than £4000 per month, which when you take out taxes, the levy, the travel and accommodations expenses, and probably also additional insurances (medical and others) because those guys are self-employed, isn’t much at al, especially if you have a family. Of course, that list doesn’t take into account money earned in invitational events, but that money goes out mainly to the top players anyway. It also doesn’t take into account things like high break bonuses but, frankly, I doubt it makes a difference to the core discussion. Also there are a number amateurs towards the bottom of the list, but, still, more than half of the pros are definitely struggling badly. Note also that both Cao Yupeng and Yu Delu earned decent money in 2017/18, but then the matches under investigation were played in previous season.

I’m not sure however if poverty is the main factor motivating match fixing, although it definitely could be in some cases. That’s where the posts by Snookerbacker and Alex come into play. They suggested that, in the case of a number of Asian players at least, they are dictated their conduct by a kind of gambling/betting mafia and act under duress. If that is true, then, clearly, punishing the players is both unfair and useless. Players will be banned and new players will be threatened, that’s all that will happen. And to be honest, I don’t know what Worlsnooker can do, except working with the local authorities in Asia to fight those mafias. I’m not sure that’s a very realistic option anyway.

If you believe that this is fantasy, allow me to remind you that James Wattana, in 1999, reported that he was threatened to be shot if he refused to lose a match. You can still read the report on that by BCC here

Also, in 2013, two Thai players, Thanawat Tirapongpaiboon and Passakorn Suwannawat, were under investigation for match fixing when their flat was set to fire. It was definitely arson. Again you can find a report by the British press here.

I was in Bangkok for the 1999 Thailand Masters when James Wattana was issued with a death threat. Wattana was told if he didn’t lose his match, he would be shot.

The amiable Thai legend quipped afterwards, “thank God they didn’t say I had to win.”

I’d like to claim I was all over the story but the fact is myself and the two other British journalists present had gone out for a drink between sessions and missed the whole thing, including Wattana’s press conference.

Thailand, great country though it is, has not been short of shady characters getting involved in snooker, particularly from the gambling community. Wattana’s own father was shot dead the day James made his 147 at the 1992 British Open.

This week, betting was suspended on matches featuring Thai players Thanawat Tirapongpaiboon and Passakorn Suwannawat at the Shanghai Masters qualifiers in Doncaster. Both players subsequently lost.

World Snooker were informed of the unusual betting patterns the previous evening and switched one of the matches to be live streamed, with the game recorded for later scrutiny.

Media outlets who ignore snooker for most of the year gleefully reported the latest match fixing allegations levelled against the sport.

An investigation is underway. Experience suggests it may not be straightforward getting information from Asia. A similar investigation into a match involving a Thai player last season was dropped.

Unlike Stephen Lee, the players in question have not been suspended, which will strike many as inconsistent.

Time will tell what evidence is provided but it seems to me the onus should be on the Thailand snooker fraternity to ensure such practices, if proven, are stamped out.

If World Snooker tells them that no new tour places will be offered to Thai players in the future if any further matches are played in suspicious circumstances then that might be a start.

Snooker is involved in a dance with the devil when it comes to gambling: it relies on the industry for a large slice of its sponsorship yet the huge number of betting markets available represents a temptation for some and opportunity for others to cheat.

Most of the fixing over the years has been in low level matches – qualifiers or small tournaments – where in many cases one wonders why odds are being offered at all.

In cases where players have cheated it is usually because they have been put up to it by ‘associates’ who flit around the sport like flies around the proverbial, unregulated and unlicensed, usually bleeding the players dry financially.

It’s a shabby, distasteful side to the game, by no means unique to snooker but one which doesn’t seem to have gone away despite increased threats of punishment.

The saddest thing is that it casts a veil of suspicion over the majority of players who compete fairly and properly and who are, in their propriety, a credit to the sport.

Things have not improved, if anything Snooker is ever more reliant on the betting industry now than five years ago. It’s an unhealthy situation.

As for the evening, I wrote than not much transpired, and indeed that’s the case but maybe this article, by the mirror is revealing some of what was said. A lot of it is old news, in particular the things about drugs and drinks are mentioned at lengths in Ronnie’s bios, and “Double Kiss” was published some time ago, it’s the paperback version that came out recently. The main message though is that he’s happy within himself, happy to become a grand-father, and, maybe considering a fourth child himself, and marriage…  and that’s all great.

PS: Thanks to Alex on twitter here is the full money list, including high break prizes, invitational events and eveything, over the last three seasons

2 thoughts on “Ronnie takes on twitter about match fixing”