Ronnie, who is the defending champion, beat Luke Simmonds by 6-1, this afternoon in York.

Luke Simmonds, an amateur, won the first frame with a good 56. The next two frames were a bit scrappy. Luke looked like making it 2-1, but broke down with just one red left on the table, tight to the cushion, between the yellow pocket and the middle pocket. Ronnie played a great double and stole the frame. This proved to be a turning point as, from there, Ronnie started to score heavily whenever he got in.

Going by what Matt Huart reported on twitter  Ronnie was full of praise for his opponent, who, indeed, played better than some of the pros I watched on the TV tables earlier this week.

Ronnie O’Sullivan is through to the second round in York following a 6-1 win against Luke Simmonds, very complimentary of Luke as a player. Ken Doherty next for Ronnie at the weekend meanwhile. 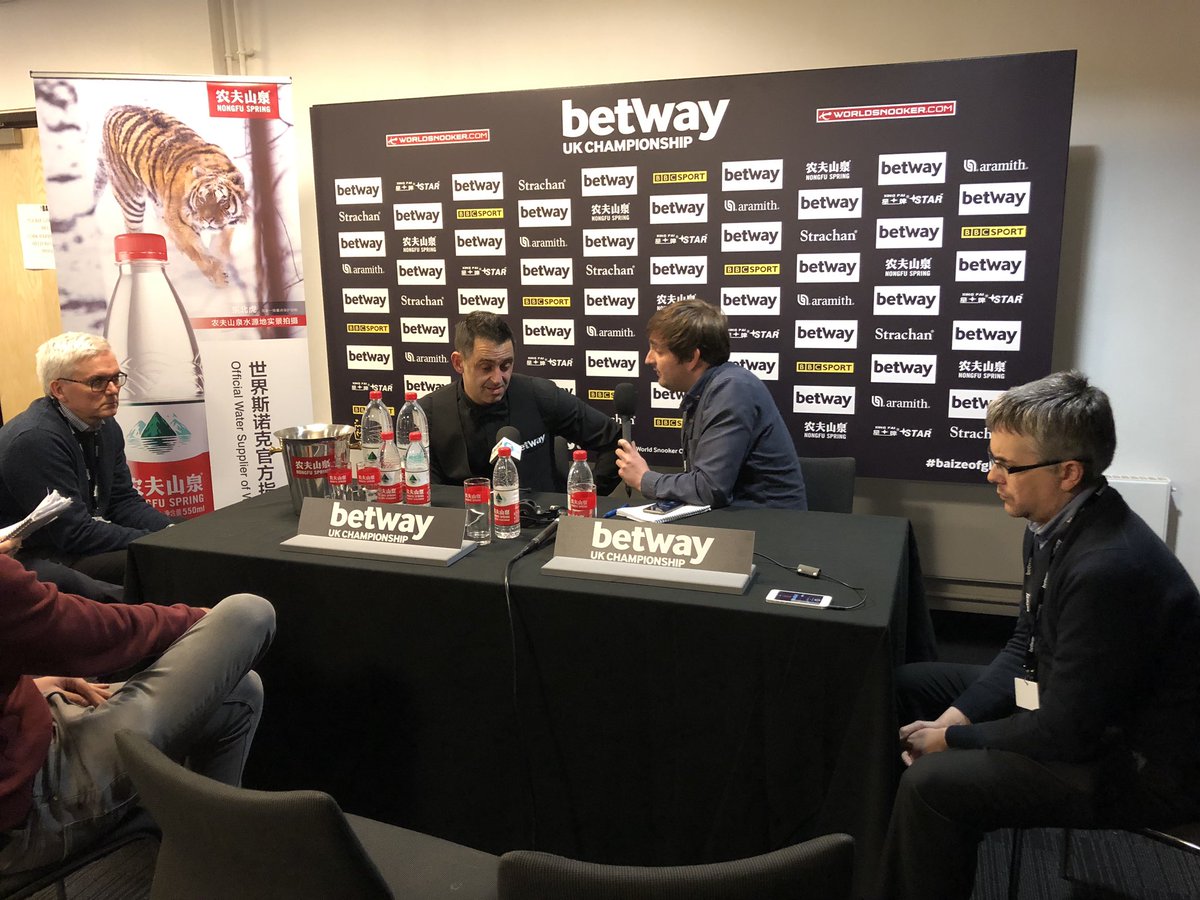 Ronnie also revealed that he wasn’t feeling well and hoped to be able to rest and get better before his next match.

A typically busy media room for the defending champion – Ronnie saying that he’s feeling a bit under the weather, will be looking to rest up ahead of the weekend. 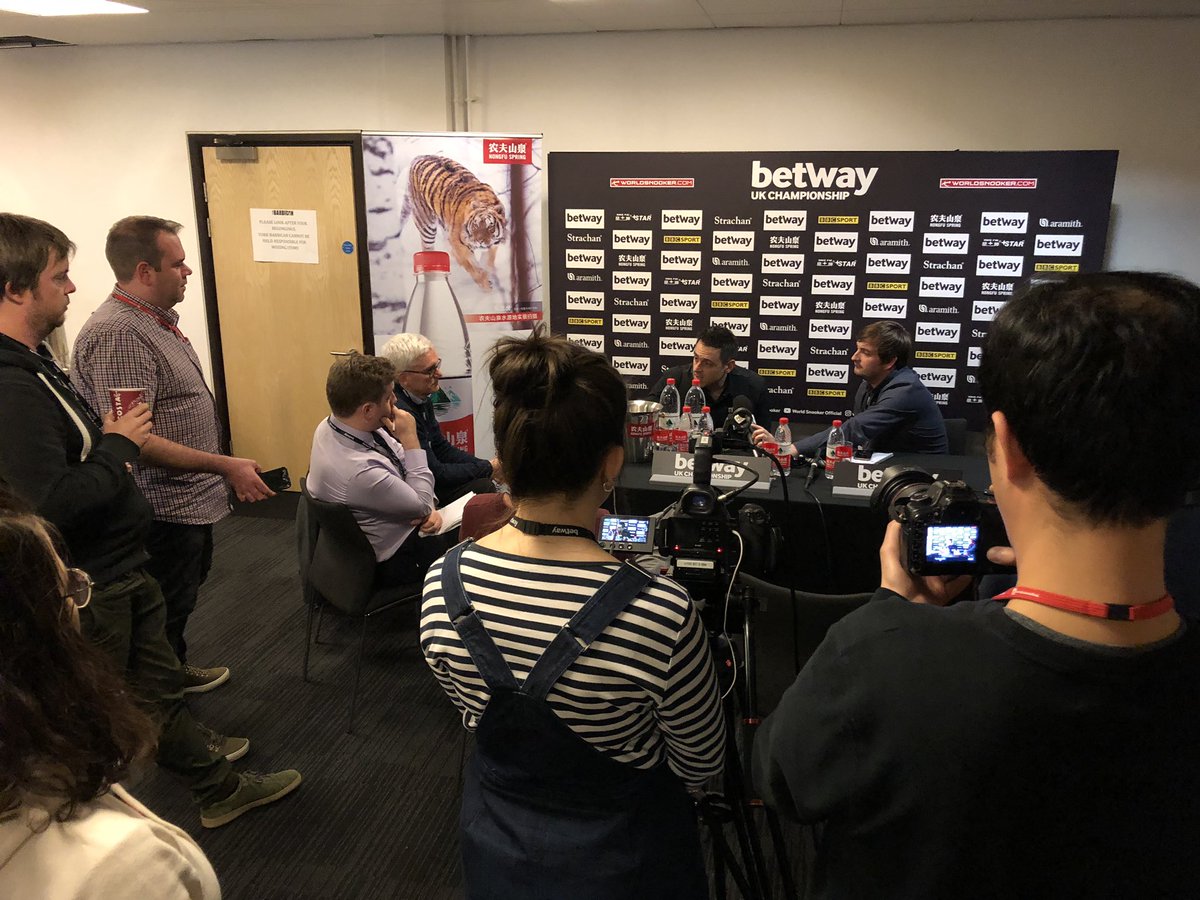 According to BBC on twitter, this is what Ronnie said:

Ronnie O’Sullivan said he was struggling with a virus in his 6-1 win over Luke Simmonds in the first round of the UK Championship. “I was really struggling. I feel tired, I had the shakes. It was one of the most difficult matches I have played.”

Here is the report by BBC

UK Championship: Ronnie O’Sullivan ‘felt awful’ but eases through to round two

Defending champion Ronnie O’Sullivan says he “really, really struggled” with illness while advancing into the second round of the UK Championship with a 6-1 win over the 128th seed Luke Simmonds.

Simmonds settled impressively, taking the first frame with a break of 56.

But O’Sullivan, who is chasing a record seventh UK title, rattled off three frames, finishing with a break of 97 to lead 3-1 at the interval.

Back-to-back tons made it 5-1 and he closed out victory with a 77 break.

“I am not feeling well – I must be coming down with some sort of virus,” said five-time world champion O’Sullivan. “At one point I was not even sure I would be able to get through – I feel absolutely awful.

“I could not focus on the ball and had to grind it out. It felt like one of the hardest matches I have ever had to play.

“It was really hard. I was really, really struggling and felt like I couldn’t focus on the balls.

“Every shot felt like a black ball in the world final. My back hand was shaking and I didn’t feel great.”

Simmonds, a 38-year-old amateur from the Isle of Wight, had a chance to go 2-0 up after a bright start in front of a near-capacity crowd at the York Barbican.

But O’Sullivan edged a crucial safety exchange and, after winning a scrappy third frame when Simmonds broke down on 46, the tournament favourite seized control.

He edged closer to the magical 1,000 century mark – a feat never achieved by any player before – with a typically rapid 118 in frame five.

The 33-time ranking event winner backed that up with a break of 112, taking him to 980 career centuries, on his way to setting up a second-round tie against 1997 world champion Ken Doherty.

Well, that’s not great. Ronnie plays next on Sunday afternoon. Hopefully, he will feel a bit better by then.

And here the report on Worldsnooker: (excerpt)

Flu-stricken Ronnie O’Sullivan admitted he could “barely focus on the balls” during his first round tie with Luke Simmonds at the Betway UK Championship  but he still managed a 6-1 victory.

And despite a slow start today the 42-year-old had little trouble in booking a last-64 match with Ken Doherty, on Sunday at 1pm.

Amateur Simmonds, who works part-time in a factory making car parts, looked as if he could manufacture a massive shock when he took the first frame with a break of 56. But O’Sullivan gradually took control, taking two scrappy frames to lead 2-1.

The 33-time ranking event winner then stepped up a gear and rattled through the last four frames in just 50 minutes with breaks of 97, 118, 112 and 77. The brace of centuries brought his career tally of tons to 980.

“I must have a virus because I felt awful today, at one point I wasn’t sure if I could get through the match because I couldn’t even focus on the balls,” said O’Sullivan, who has already won the Shanghai Masters and Champion of Champions this season. “I had to just grind it out. It felt like one of the hardest matches I have ever had to play.

“Every shot felt like a black ball in the world final. My back hand was shaking and I kept thinking I was going to feather the white because I couldn’t focus. I am struggling now just to keep my eyes open. I know I’m good but I can’t avoid getting flu!”

As for his opponent, O’Sullivan added: “I can’t believe Luke is a factory worker because he’s got more shots than 80% of the players on the tour. He’s got talent and he would beat a lot of players. He played as if he had nothing to lose today and played some lovely stuff.

“I could have lost today and if I had done I would have had to accept that’s how snooker is now. I’d take losing in ten first rounds this season if it meant winning three trophies. I’m not a quarter-finals or last 16 man, for me it’s all about wins and there are probably only a handful of players who have that attitude. Once the wins dry up then you won’t see me around.”

And in case you missed it …