This is the full interview that started it all

Ronnie told more to BBC about his “Breakaway” plans

Ronnie O’Sullivan says he is “ready to go” and form a breakaway “Champions League-style” snooker tour.

The five-time world champion is unhappy with the number of events on the calendar and the travelling required.

The 43-year-old says seven-time world champion Stephen Hendry is “ready to come out of retirement” and hopes John Higgins joins too, as well as the two recently banned Chinese players.

“I am looking for seven or eight real top-quality players,” said O’Sullivan.

Speaking after his narrow second-round victory over Ken Doherty at the UK Championship, he said: “I am just waiting for four or five unhappy players. I am ready to go and if someone offered me the opportunity to play on another platform, I would be gone tomorrow.

“I want to play in quality events, good venues against great players and that is what inspires me. The tour is fantastic for a lot of people but it is not for everybody.

There is space for two tours. Everyone loves choice

“I am being patient because I still have 15 years left in this game and I feel I can play into my mid-50s easily. There is no rush.”

O’Sullivan’s comments come following a series of run-ins with World Snooker over the last year, in particular with chairman Barry Hearn.

Earlier this month, O’Sullivan called Hearn a “dictator” for the way the sport is run, while in January Hearn said the sport can survive without O’Sullivan.

At last year’s World Championship, O’Sullivan claimed he was being “bullied” by snooker authorities, which Hearn rejected as being “unfounded”.

O’Sullivan, who says he has had conversations with financial backers, explained how he thinks his proposed breakaway would work:

Why does it need to happen?

“The public will have the choice of the best playing each other every week. You don’t see Leyton Orient turning up to play Lionel Messi at Barcelona. It does not happen. It is demotivating.

“Messi would get fed up having to playing Huddersfield Town and Orient. He wants to play against Cristiano Ronaldo and wants to hear the Champions League music. It gets you excited. There is space for two tours. Everyone loves choice.

“As a sportsman, I like to see the green jacket in golf, I like to see Roger Federer in tennis coming out looking slick at Wimbledon. I don’t want to see Federer at Richmond Park having to qualify for Wimbledon.

“The guy deserves a bit more than that. If they asked him to do that he would probably swerve it. John Higgins is no different to Federer or Rafael Nadal, they are in different sports but at the same level of class.”

Who would be involved?

“It is a chance to get John Higgins, the two Chinese players [Yu Delu and Cao Yupeng] who have been banned, and I know another couple of top-ranked Chinese players who are unhappy at the travelling they have to do, playing in qualifiers at Barnsley.

“Stephen Hendry is ready to come out of retirement and is up for it and three or four other good players. I would have to have a package in place but I need players.

“I am ready but I cannot do it on my own. The whole idea is to play against quality players day in day out.”

What would be the format?

“I doesn’t need lots of top players, I am not looking for an alternative tour. I am looking for seven or eight real top-quality players, Champions League or ATP tennis style. Every match would be a final.

“You have your 128 players that you might want to watch, and then the crème de la crème playing match in, match out. It would be very different.

“I would not dream of putting an event on in which one guy is mauling another. It would have to be competitive.”

Would players have to give up their tour card?

“Absolutely. It is a risk for Higgins and people like that.

“The 64th ranked player in the world might have played in 13 events and six months into the season he has made around £14,000. Do your maths, he has to find food money from somewhere.

“It is up to people to make a decision. I am looking for people who are ready and are at the point of no return.”

Where would it be played?

“There is talk about Abu Dhabi, Dubai, China is a nailed on one, Europe is very big. There are so many places you can go. They are just the start. We are talking at the moment.”

‘Higgins would not be up for it, no way’

While O’Sullivan is enthused at the prospect of a breakaway, his beaten opponent on Sunday takes a different view.

“It would [be sad],” said 1997 world champion Doherty. “You need those players on the tour but I could not see how it would work. They have tried it in other sports but it never really peeled off. Maybe darts [the PDC split from the BDO in the 1990s] in is a different example.

“But I don’t think the public would like it. They want to see them playing in all the blue riband events including the UK Championship.

“Why would you want to break away when you can create amazing records, more than what O’Sullivan has already has done?

“Knowing John Higgins I don’t think he would be up for it anyway, no way.”

And here is another account, as reported by Hector Nunns

By HECTOR NUNNS FOR THE DAILY MAIL

Ronnie O’Sullivan threatened to start a breakaway snooker tour after keeping his bid for a record seventh UK Championship title alive on Sunday.

The Rocket edged past Irish veteran Ken Doherty 6-5 to reach the third round at York’s Barbican Centre. But five-time world champion O’Sullivan, 42, then urged fellow ‘Class of 1992’ member John Higgins to join him in creating a separate Champions League of snooker.

A dejected Higgins, 43, claimed that he was close to retirement and lacking form and motivation after losing to Alan McManus on Saturday night. 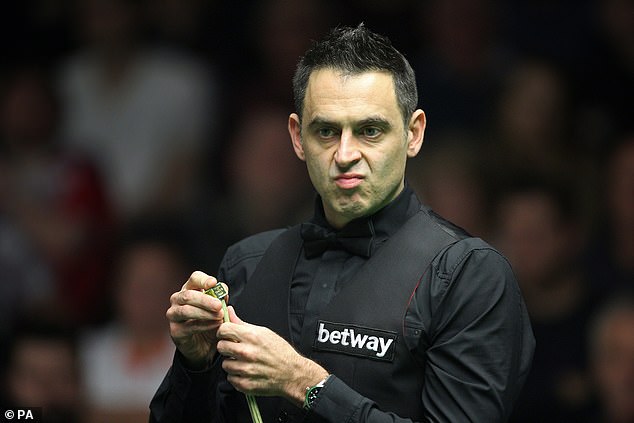 World No 4 O’Sullivan has been fiercely critical of World Snooker in recent weeks over venues, formats and large fields — but believes he can find a solution.

‘It is very sad when you see someone like John Higgins talking about retirement,’ he said.

‘I will talk to him and find out what he is thinking. But if he wants to play and finds the tour a grind, I am waiting for four or five unhappy players because I can’t play on my own. I am ready to go if there was another platform. If there are people who are fed up and want to play a Champions League-style thing with titles, money and trophies in good venues — it is possible but I need players.

‘It is a big ask — they would have to give up a tour card and not play in the World Championship. And you have to have something to offer them to come over. But I have talked to possible backers.

‘If John is at that stage that he doesn’t want to play on this tour for whatever his own reasons are, then there is an opportunity because I think he would still like to play. 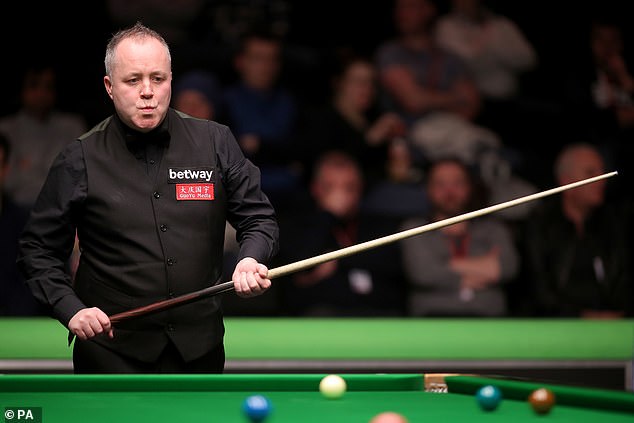 ‘The unhappier players are, the more they would like to play some snooker rather than retire. John doesn’t want to retire I think, but he doesn’t want to be on the slog that there is.’

O’Sullivan outlined his plans for the new tour, saying: ‘I see an ATP style, best of the best — or people can watch the 128 players on the regular tour. I want to play in quality events, eight of the best. I just need players.

‘You don’t see Leyton Orient playing Barcelona, Messi would be demotivated doing that. So there is space for a 128-player tour, and then a creme de la creme. I wouldn’t be doing the Ryanair service. There are a lot of other players who are kind of a little bit unsettled as well. The more unhappy the players are, the more the chance we can maybe do an alternative tour.’

O’Sullivan added: ‘You have the Chinese kids who have been banned recently, which was maybe a bit heavy, and a couple of top-ranked Chinese players are tired of the travelling.’ 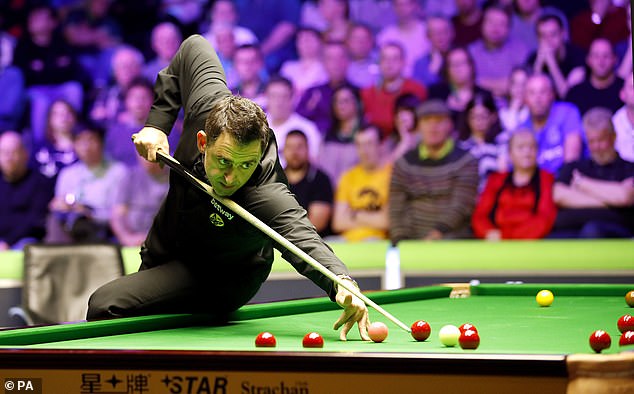 World Snooker supremo Barry Hearn hit back at O’Sullivan for his remark about Chinese stars Yu Delu and Cao Yupeng, who have been banned for a combined 16 years for match-fixing.

He tweeted: ‘Harshly! Are you serious? Cheats were exposed and punished. Please keep such stupid comments to yourself. You are getting ridiculous, and I expect better from a player of your standing. Enough.’

And 1997 world champion Doherty, questioned if a rival snooker tour would succeed.

‘I would be sad if such a breakaway happened, you need those players on the tour. I couldn’t see how it would work, it has been tried before in other sports and it hasn’t always worked.

‘I don’t think the public would like it, they want to see them play in all our blue-riband events, this being one of them. Why break away when you could go on and create more history?

‘And I honestly don’t think John Higgins would be up for it anyway,’ said Doherty.

Now I’m really not sure that involving players who have been banned for match-fixing is a great idea.

Anyway, it’s clearly just an idea, for now, nothing actually decided and sealed. Also, it’s not meant to be a replacement for the main tour, there is no ambition to create a rival professional body, more like a platform where players who feel that the current structure of the main tour doesn’t suit them, could play and earn some cash. If the idea comes to something – which I doubt at this stage – it’s likely to attract older players, with an established CV, who want to put their families and some me-time ahead of running all around the world week-in, week out, to earn more money and titles. How many are into that sort of state of mind, I’m not sure.

Anyway, this is Judd’s Trump reaction on Eurosport. Obviously a very different perspective, but then Judd is young, he doesn’t have children and he’s not been around in the nineties which is the era Ronnie clearly is nostalgic about.

And someone who clearly has changed his perspective since having a child is Ding. Ding this season has cut on his schedule in the UK.

As for what Hearn reacted to, here it is

Ronnie didn’t elaborate further and got a lot of stick for this. But not everyone thinks it’s “ridiculous”. Neil Robertson obviously has a more nuanced opinion and was interviewed about the issue. Unfortunately I couldn’t find that interview anywhere, which is a bit strange. Asked what he said, this was his answer on Twitter: