Skip to content
HomeCrucible 2019 – last interviews before it starts

The World Championship starts in a few hours and Shamoon Hafez (BBC) has been interviewing some if the main contenders.

BBC Sport at the Crucible Theatre 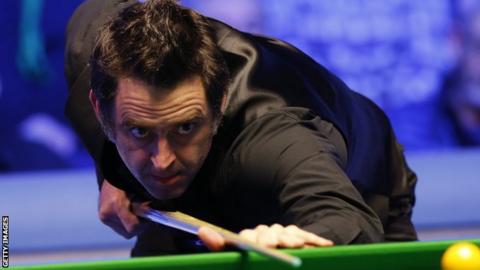 Five-time champion Ronnie O’Sullivan says “more pressure” can be “better” as he aims for a record 37th ranking title at the World Championship, which starts at the Crucible Theatre on Saturday.

O’Sullivan has had a stellar season, returning to number one in the world, winning five events and is favourite to claim the trophy in Sheffield.

The 43-year-old Englishman is tied with Scotsman Stephen Hendry on 36 titles and faces a first-round tie against James Cahill – the first amateur to qualify for the event.

“If you don’t feel pressure you are probably not going to perform well,” said O’Sullivan.

“People say ‘there is too much pressure’ but I don’t understand that. If I said to someone, ‘you have 24 hours to get out of this room or your life will end’, you will probably find a way out.

“Sometimes when the pressure is on you, you can overcome obstacles. Sometimes the more pressure, the better it is.”

‘The Rocket’ has entered just 10 tournaments this season but claimed the invitational Shanghai Masters and Champion of Champions, as well as the three ranking titles – the UK Championship, Players Championship and Tour Championship. His victory over Neil Robertson in the latter took him to world number one again for the first time since 2010.

O’Sullivan, who begins his campaign on Monday, said: “It is difficult to share the enthusiasm when you are not driven by records. If you ask me how my year has been, I would say it was fantastic, not because of the titles and records, but I have had a really good year, that is how I value my life.

“I play and I enjoy but I have never set out to break records or think I want to become better next season. The game fills my schedule up, I do it in my own time but at this rate I can play until I am 70. I was born to play snooker, it is what I have done for a long time and my life would be duller without it.”

A record six Chinese players will appear at the Crucible, the highest ranked being Ding Junhui, who was runner-up in 2016, and faces Scotland’s Anthony McGill in the first round.

The tournament will also see seven debutants – the most in 20 years – including the first from Cyprus in Michael Georgiou, who comes up against Neil Robertson on the opening day.

Australia’s Robertson has been in superb form, reaching the final of the past four tournaments, winning the China Open, but has not triumphed at snooker’s showpiece event since 2010.

He told BBC Sport: “My game has never been in better shape having won the previous tournament before. I still had enough time to relax and chill out.

“It has been a long time since I won it. This tournament is different because it is under a longer format and a level about the rest. I have won the major titles in between but more world titles is what I am after.”

Masters champion Judd Trump begins against Thailand’s Thepchaiya Un-Nooh on Tuesday and unlike Robertson, is in a tough half of the draw which features O’Sullivan, three-time winner Mark Selby and Ding.

Trump told BBC Sport: “I would rather play and get through against the top players. There is a lot less expectation coming through that bottom half and if you get through and become world champion then you fully deserve it.

“I am quite happy with the draw, I play my best against the top players. I don’t want to win the world with an easy draw, I want to play Ding in the second round, Ronnie in the quarters and Selby in the semis, that would be my dream line-up.

“I have tried not to put too much emphasis on the World Championship and prepare like I have done for other tournaments. It is important not to try too hard in this tournament and I have practised harder than ever.”

‘World Snooker would rather anyone than me won it’

Mark Williams will defend his title against qualifier Martin Gould to a finish on the opening day but claimed World Snooker would not be keen to see him win again.

“They don’t want a 44-year-old has-been winning the tournament,” the Welshman said. “They want a youngster coming through who they can get behind and who will push the sport.

“I think World Snooker would rather anyone than me won it this time.”

Williams also questioned his absence from a prominent role in the tournament’s promotional material. Beneath a photo of an advertising board which placed Ronnie O’Sullivan and Mark Selby in prominent positions, the Welshman tweeted: “Spot the current world champion.”

A World Snooker spokesman said: “Mark Williams is a great world champion and we’d love to see him win it again. All we want to see is the best player win the tournament.”

It’s not great that Mark Williams is feeling this way, but I can understand why he does.

Indeed just have a look at the poster:

He’s completely in the background, whilst Mark Selby who has not done much at all this season in right in front. Mark Also wasn’t on the cover of the new game “Snooker 19” that Worldsnooker is promoting. That’s hard to understand unless Mark is indeed right.

In my opinion he’s been a great World Champion but that view may not be shared by everyone. There is a trend now to ask sportsperson to be “Mr/Mrs Perfect”. Well spending the whole year celebrating on social media with a lot of drinking involved, and getting in trouble in Dubai for being too explicitly flirty (with his own wife BTW) may not be what’s expected of Mr Perfect. But what Mark certainly has done, and I believe it’s much more important than being Mr Perfect, is being a champion to which the man and woman of the street can relate/identify. Because, we, real humans in real life, we are not “Perfect” and it’s hard to relate to an image that bears no “reality”.

3 thoughts on “Crucible 2019 – last interviews before it starts”