Ronnie had a fantastic season but it ended in bitter disappointment with a first-round exit, the first one in 16 years.

Ronnie had prepared well for the championship and had said earlier that working with Sightright had given him hope that he might, maybe, be World Champion again. He’s currently World number 1, despite playing only in half of the tournaments, and unless Neil Robertson or Mark Selby win the title, or Mark Williams gets to the final again, Ronnie will finish the season at the top of the rankings. But it wasn’t meant to be in Sheffield this year.

As you can see despite everything, it wasn’t the worst match.

Amateur James Cahill pulled off one of the biggest upsets in Crucible history, to defeat world number one Ronnie O’Sullivan 10-8 at the Betfred World Championship in Sheffield.

23-year-old Cahill came through qualifying to secure his World Championship debut and become the first ever amateur to compete at the Crucible. He has now inflicted O’Sullivan’s first opening round defeat since 2003, when he lost out to Marco Fu. The Rocket has only lost at this stage four times in his entire career.

The magnitude of the upset is amplified by five-time World Champion O’Sullivan’s superb season heading into this year’s event. He’s entered tournaments sparingly, but has won five of the 11 he has taken part in. The 36-time ranking event winner lifted silverware at the 2018 Shanghai Masters, 2018 Champion of Champions, 2018 UK Championship, 2019 Players Championship and the 2019 Tour Championship.

Blackpool’s Cahill is no stranger to giant killing victories, having beaten Ding Junhui and Mark Selby at the UK Championship, in 2014 and 2018 respectively. Despite competing this week as an amateur, he had previously spent four seasons as a professional, before dropping off the tour in 2017.

Cahill has already ensured his professional status for next season. He’s amassed enough money on the one-year ranking list, in appearances as a Q School top up, to earn a two-year tour card starting next term.

They came into this morning’s concluding session with Cahill holding a surprise 5-4 advantage. O’Sullivan stamped his authority in the opening frame with an imposing break of 97.

However, Cahill showed his steel and refused to buckle in his first appearance in the Crucible cauldron. He responded with a break of 84 to regain the lead at 6-5, before claiming the following two frames to lead 8-5 at the mid-session.

When they returned O’Sullivan turned up the heat and made breaks of 104 and 89, on his way to three frames in a row to make it 8-8. As the finishing line came into vision for both players, they then battled it out in a hugely dramatic 17th frame.

Cahill got in first with a contribution of 62, before breaking down on a straightforward red. O’Sullivan appeared to be in position to punish the mistake, but landed on the wrong side of the final pink and missed it on a break of 53. Cahill eventually deposited the pink and potted a tough black to move one from victory at 9-8.

O’Sullivan had the first opportunity in the following frame, but broke down on 42. Cahill held his nerve and made a steely clearance of 53 to secure the biggest win of his career. He will now face Stephen Maguire in the last 16.

Cahill said: “I was a bit nervous when I went out there, but after that I settled really well. I felt like I was playing another tournament, which I think was a big part of it. He started coming back at me, but that is what you expect from Ronnie. I made a couple of good breaks to get back into a flow. He was under a lot of pressure himself. He didn’t want to lose to me and I’m just glad I managed to hold myself together and win at the end there.

“You’ve got to believe you can beat anyone. I’ve got so much respect for Ronnie, he is such a great player and is my idol really. But there’s only so much respect you can have for these people, because at the end of the day you’ve got to go out there and beat them. If I had too much respect, then I probably wouldn’t have cleared up at the end.

“I won’t be losing to Stephen Maguire for the sake of being flat. If he outplays me, then fair enough. When I beat Ding in the UK Championship, I did all these interviews and then was flat coming out the following day. I’ve learned from that and matured as a person and a player.”

O’Sullivan said: “I will look back and think that it has been a very successful season. I treat every tournament I play in like the World Championship. This one just wasn’t meant to be.

“I thought he did well, especially in the last couple of frames. He potted a good pink and black. That clearance at the end was a very good clearance. He held himself together well playing at the Crucible.

“I just felt a little bit under the weather. My legs are like lead and my arms feel really heavy. I’m not making excuses, I just felt absolutely exhausted to be honest. I tried to do as much as I could, to hang in there and see if I could manage to somehow get through the match, and after I few days I might have felt better. But it wasn’t meant to be.”

Big thanks to Tai Chengzhe for those great images.

The action – frame by frame:

Jason Francis had posted this on twitter before the session:

only those who have played here can understand the pressure the magical crucible theatre brings. no one arrives with more expectation, no one feels it more. He has conquered that 5 times, uphill today against a great young player who has nothing to lose. Dig deep mate 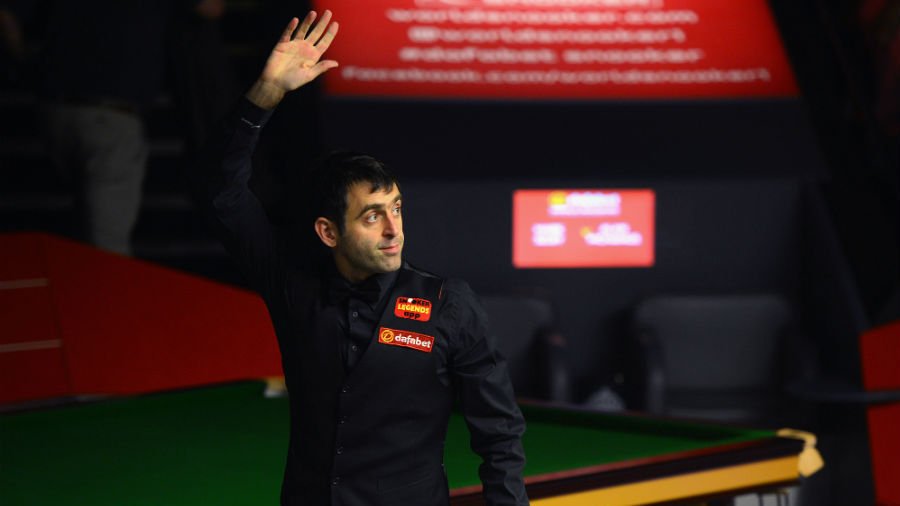 An “exhausted” Ronnie O’Sullivan in for his press now. Speaking well and professionally but definitely doesn’t look himself physically, as it appeared during the match. 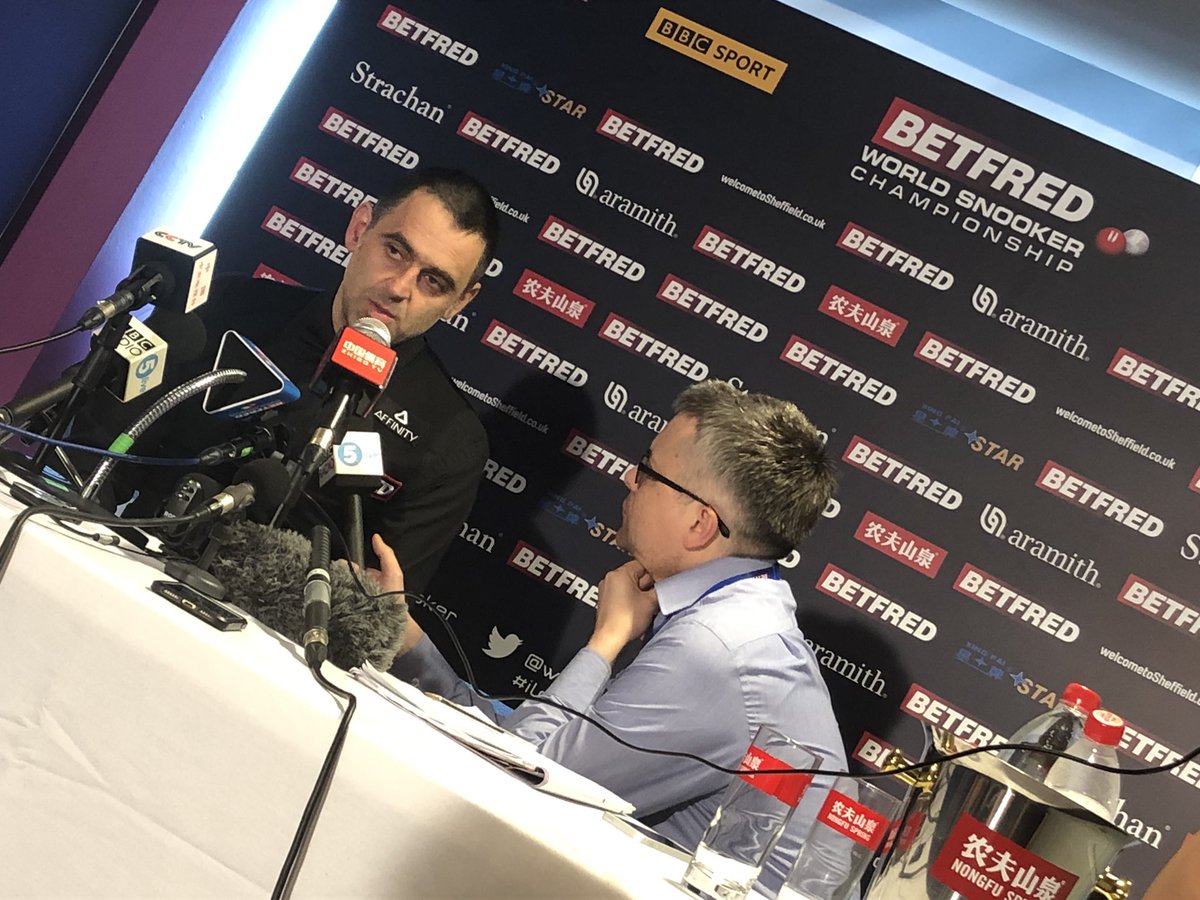 Doesn’t look healthy in this match Ronnie, wouldn’t surprise me if he says he’s ill in the press conference. Looks very tired and lacking energy.

Neither Matt, nor Mike are “Ronnie fanboys”. This is the reality they perceived.

So everyone who wants to come up with “disrespect”, “not trying”, “not giving a f**k”, abstain. You’re wrong. Yes, Ronnie’s shot selection was not the “correct shot” one. But if you feel unwell and exhausted, then you know that the longer the match lasts, the lower your chances are to win it. So you will take risks and hope it works for you. Not to mention that it’s hard to think clearly under such circumstances. From 5-8 down Ronnie fought with all he had. As a fan I’m happy with that even if I’m bitterly disappointed to see him lose, as I’m sure he is himself. He prepared well for this tournament. I hasn’t worked out as hoped. It’s unfortunate but those things happen. Ronnie always comes at the Crucible under the weight of very high expectations too. That makes it even worse if/when the player doesn’t feel 100%.

James Cahill played brilliantly, held himself together when it mattered most. His last clearance was remarkable. He is an amateur, but he has been a pro for four years. He’s no rookie. This season, as a top-up he has managed to regain his tour card via the one year list, despite not playing in all tournaments, and I believe that he’s the first to achieve that. He has beaten Mark Selby and Ding Junhui in the UK Chamionship, and Shaun Murphy in the Welsh Open. Surely that shows he’s probably better than many of the actual pros in current form. He’s been working with Chris Henry. He deserves every credits for what he’s achieved, but this win, albeit being a surprise, is not the cosmic shock some wants to make of it.

So from me now it’s

Congratulations James Cahill and good luck in the rest of the tournament.