Skip to content
Home2020 European Masters in Austria – Neil Robertson is your Champion!

Neil Robertson, the only “poster boy” actually playing in Dornbirn, has secured his spot on next year poster … by winning the evening, and in some style as well!

Neil beat Zhou Yuelong by 9-0, only the second whitewash tournament win over a multiple sessions match. He’s now on 17 ranking titles, the same as Mark Selby.

Neil Robertson is just one frame away from becoming the second player to whitewash his opponent in a two-session ranking event final as he leads Zhou Yuelong 8-0 at the BetVictor European Masters. 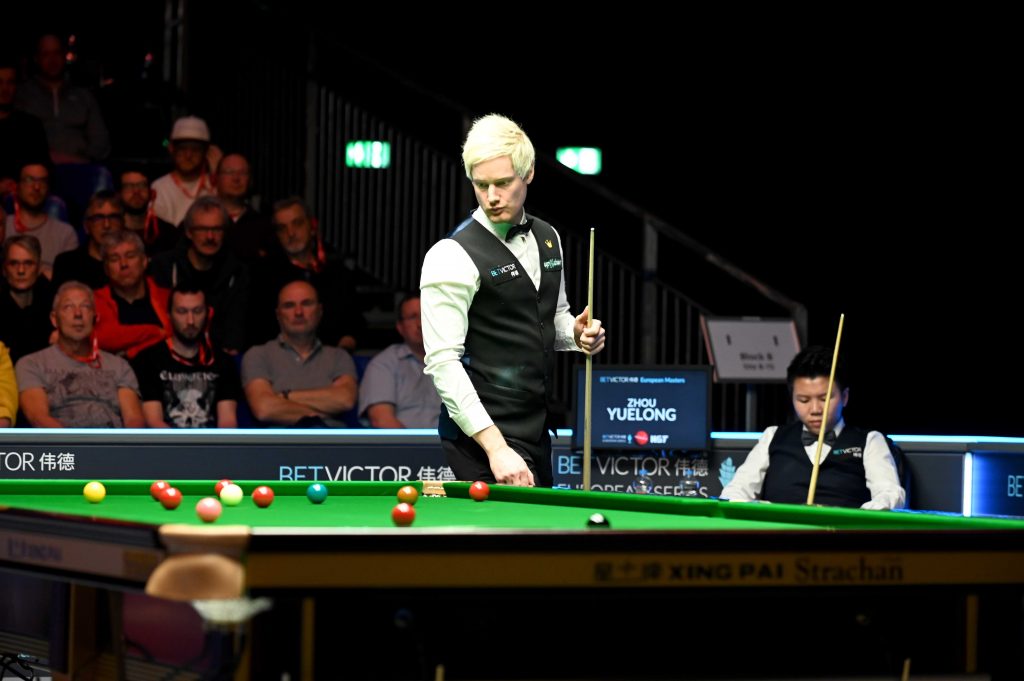 Robertson dominated his opponent throughout the opening session in Dornbirn, Austria as he moved within a frame of the £80,000 first prize.

The only previous whitewash in a ranking final of similar length came at the 1989 Grand Prix when Steve Davis beat Dean Reynolds 10-0.

Victory would give Robertson his 17th ranking title, moving him level with Mark Selby in sixth place on the all-time list. It would be his first ranking title of the season, though he did win the invitational Champion of Champions in November.

The winner’s cheque would give the  37-year-old Australian an early lead in the race to claim the £150,000 bonus in the new BetVictor European Series.

China’s 22-year-old Zhou, playing in his first ranking final, would need an unprecedented fight-back tonight to avoid the runner-up prize of £35,000.

Zhou had chances in the first two frames but couldn’t take them, allowing his opponent to forge ahead. In the opener, Zhou might have cleared from 45-0 down, but failed to gain position on the final blue. A safety exchange on the pink ended when Zhou’s safety error left it over a middle pocket, and Robertson took the opportunity. 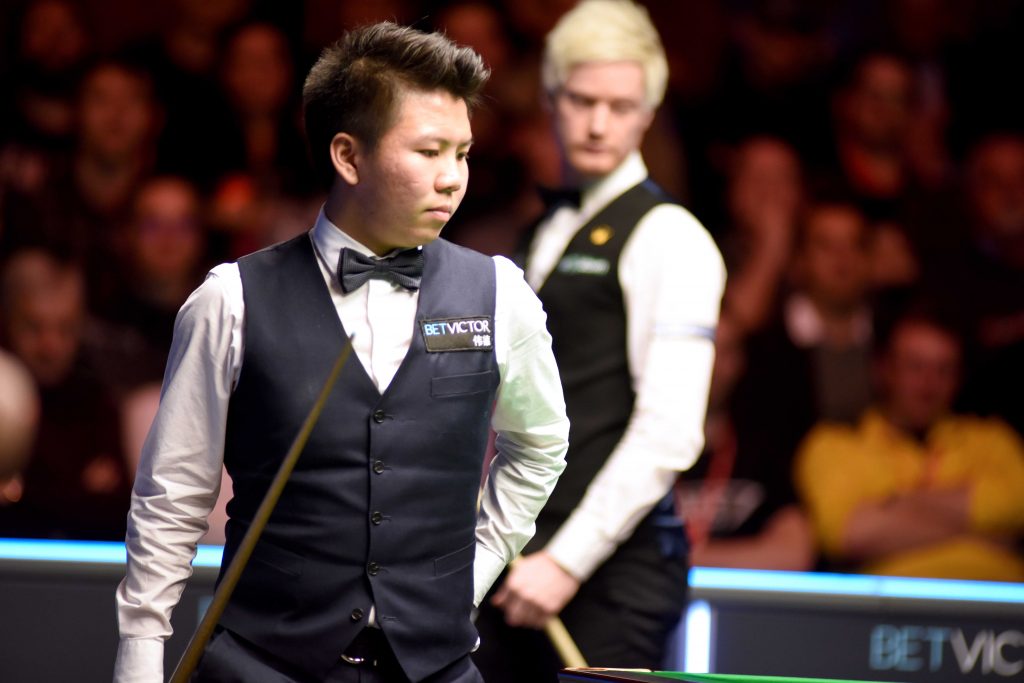 The second came down to the last red and again it was Robertson who got the better of the tactical battle, trapping his opponent in a tough snooker, and from the chance that followed he cleared for 2-0. Zhou failed to trouble the scoreboard in the next three frames as Robertson fired breaks of 99, 128 and 82 to lead 5-0.

At that stage Zhou was at the wrong end of a sequence of 410 unanswered points. He ended that run in frame six, but when it came to the last three reds he failed to escape from a snooker and Robertson added the points he needed to extend his advantage.

Runs of 29 and 34 helped Robertson dominate frame seven, and he finished the session superbly with a 109, his seventh century of the week. 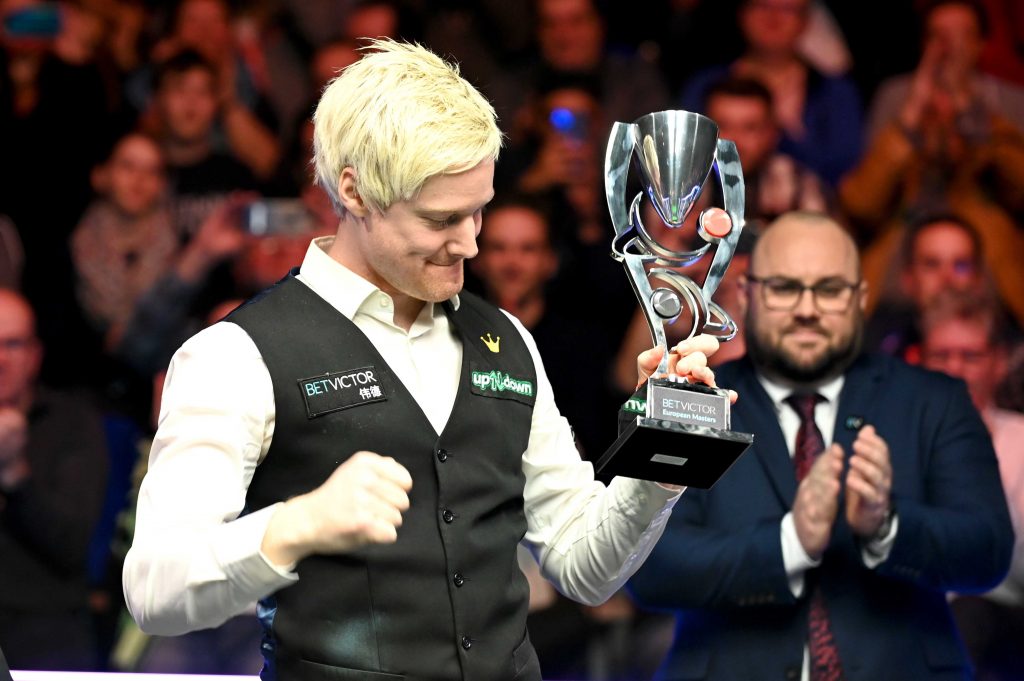 Neil Robertson became the second player ever to whitewash his opponent in a two-session ranking event final as he beat Zhou Yuelong 9-0 to win the BetVictor European Masters in Dornbirn.

It’s a piece of snooker history for the Australian as it’s the first ranking final to finish 9-0. The only previous whitewash over a similar length came at the 1989 Grand Prix when Steve Davis beat Dean Reynolds 10-0.

Robertson destroyed China’s 22-year-old Zhou, who was playing in his first ranking final, with a cold-blooded display. Four frames were won in single visits, the other five demonstrated his tactical supremacy as he marched to the £80,000 top prize. He has now won 17 ranking titles, bringing him level with Mark Selby in sixth place on the all time list.

Having landed a title early in 2020, the 37-year-old continues his record of winning a tournament in every calendar year since 2006. And he leaps to the head of the Order of Merit for the new BetVictor European Series – the player earning the most money across the four events will earn a huge £150,000 bonus. 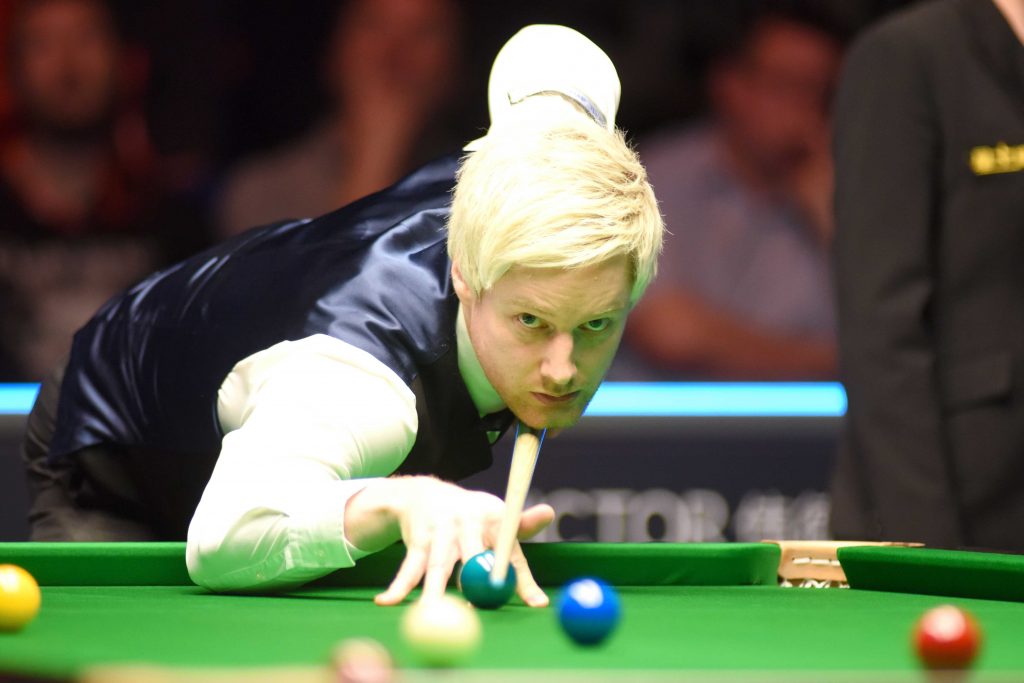 Robertson is up from fifth to third in the official world rankings. Surprisingly, prior to this week he had not been beyond the last 16 of a ranking event this season, and came into this tournament in 22nd place on the one-year rankings, but now jumps to eighth to boost his hopes of qualifying for all three Coral Series events.

The Melbourne native, World Champion in 2010, has now won an impressive ratio of 17 of his 27 ranking finals.

Zhou, by contrast, came into today’s match with a bare minimum of experience at this level – his only previous final of note came at the 2015 World Cup when, alongside Yan Bingtao, he claimed glory for China.

His 6-5 semi-final win over Gary Wilson finished at 1.20am in Sunday’s small hours, hardly the best preparation for the biggest match of his life. The young talent from Chengdu had chances in the first two frames against Robertson. But after he failed to take them, he couldn’t keep tracks with an opponent who showed no mercy.

Defeat by such a margin is a blow to Zhou’s confidence but it has still been a week in which he has shown his potential, beating the likes of Wilson, Mark Williams and Barry Hawkins. He banks £35,000 and moves seven places up the world rankings to 25th.

Breaks of 57, 99, 128, 82 and 109 helped Robertson to take eight all frames in the first session. When they returned this evening, Zhou had chances to avoid the whitewash as he led 45-1 in the opening frame. But Robertson, ruthless to the end, clawed his way back into the frame and took it to the colours. He trapped Zhou in a tough snooker on the green, and from the chance that followed he potted green and brown to secure the title. 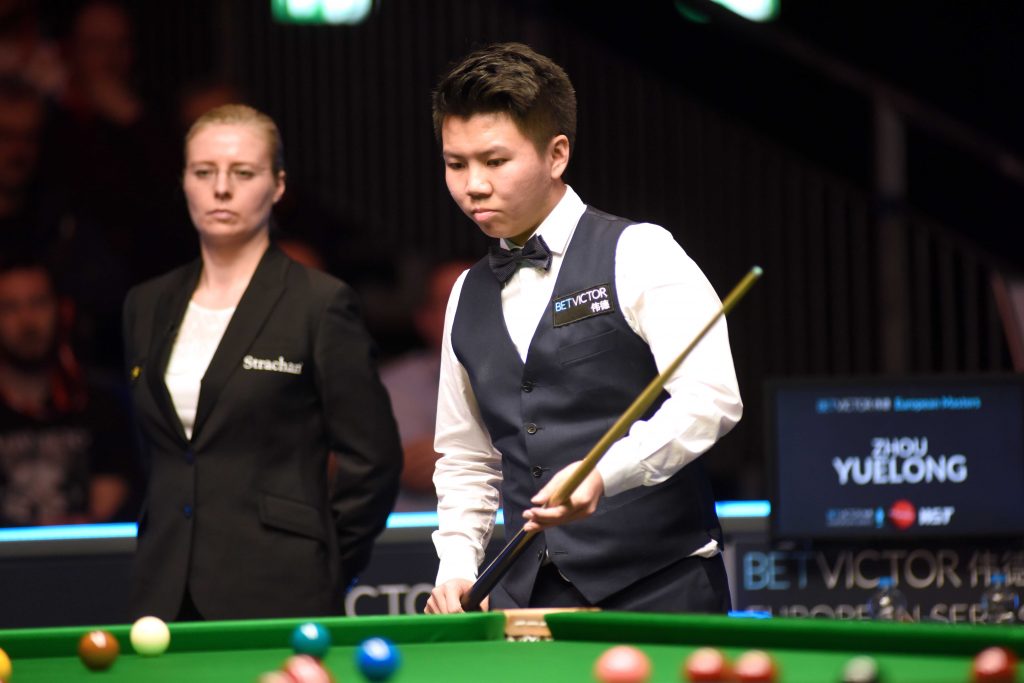 “It was a strange feeling tonight because if I had lost one or two frames I would have been disappointed not to join Steve Davis, 31 years after it had previously been done,” said Robertson. “That gave me an extra focus tonight, to really try and win that frame. On the colours I was just praying for one chance, and I knocked in a good green.

“The first two frames this afternoon could have gone either way, after that I played well, I was very aggressive. My long potting was ridiculous and I scored very heavily. From 2-0 to 8-0 he didn’t do much wrong.

“To win 9-0 is amazing. It’s just one of those rare things. I didn’t let him settle, I kept my foot down all the way. I was determined to win every frame. I feel a bit sorry for the crowd tonight because they didn’t see much snooker, but at the same time they got to witness a bit of history.

“As soon as I was shaking Zhou’s hand I told him not to worry about it. He has a lot of positives to take away from the week. I’m sure he will win a tournament before long.

“Winning a title early in the year gives me breathing space. I’m really proud of that record (winning a title in 15 consecutive years). I always try to improve every year because the whole tour is improving all the time.

“I’m really keen to press home my advantage (for the BetVictor bonus), a good run in Germany could almost secure it for me. You might see me in the Shoot Out as well.”

Zhou said: “The first two frames were important. Neil won them both and after that he had less pressure on him. If I had won one of them it might have been different. For the next few frames I had no chance, I didn’t score a point. I tried my hardest and I hope in my next final I will play better.”

For Zhou it was a very hard day. It was his first ever final, he had a very hard semi final on the previous evening, actually only finishing in the early hours in the morning. I’m sure that he tried his best and he certainly can play better,  The first two frames were crucial indeed. He could have been 2-0 up and we probably would have had a different match. And he even found the strenght to smile during the trophy ceremony…

2 thoughts on “2020 European Masters in Austria – Neil Robertson is your Champion!”