David Hendon has written this great piece about Ronnie.

It was written for WST, and published today: 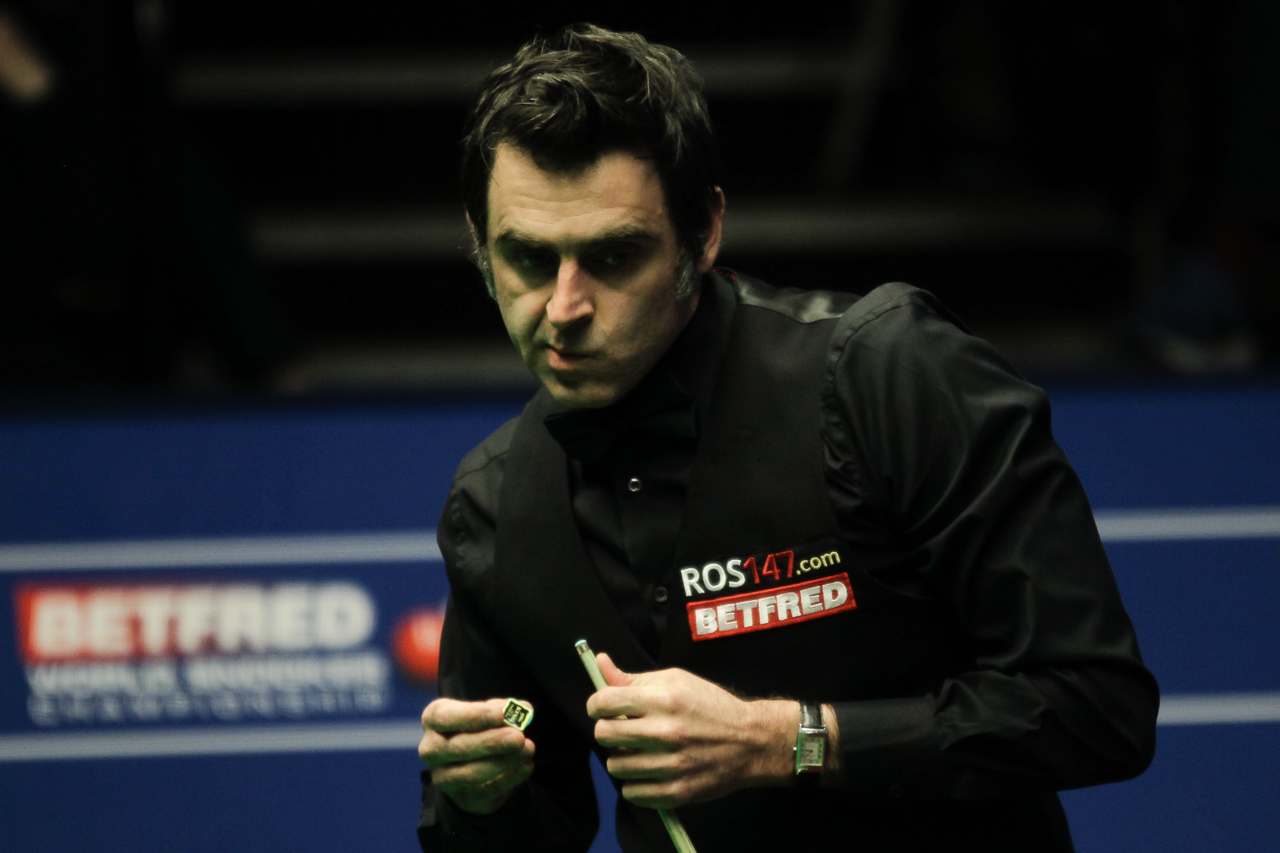 Few players have experienced the rollercoaster ride of emotions at the World Championship like Ronnie O’Sullivan, whose Crucible career continues as he approaches middle age. Journalist and commentator David Hendon looks at the Rocket’s highs and lows at the home of snooker…

Matthew Spade, like many young hopefuls chancing their arms when the game went open, did not set the world of professional snooker on fire but earns a place in the record books as the first ever opponent for Ronnie O’Sullivan in the World Championship.

It’s easy now to romanticise the long, hot summer of 1992. In reality, there was little romance to be found in the vast ballroom of the Norbreck Castle Hotel in Blackpool, the venue for all qualifying competitions. This was a snooker factory, a seemingly endless carousel of matches for the various ranking events, the final stages of which must have seemed a distant prospect as competitors slogged through round upon round, day after day. Among the sea of faces were up-and-comers, legends on their way out and players who thought they were good enough and in for a rude awakening.

Most thought O’Sullivan was good enough to make the grade. His name was already known through stellar performances in the junior scene and a run to the English amateur championship final. The qualifiers for his first World Championship concluded in September, closer to the 1992 Crucible showpiece than the event he was trying to reach.

By then, O’Sullivan had cut a swathe through the qualifiers. He would win 74 of his 76 matches, including his 5-0 defeat of Spade. In the next five matches in the world qualifiers he only lost three frames, including a 5-1 defeat of Chris Small, who had reached the last 16 in Sheffield a few months earlier. Nobody got near him and O’Sullivan eventually beat Mark Johnston-Allen 10-4 to qualify. He was still 16, the youngest player to ever book a place at the Crucible, although by the time the televised stage began seven months later not the youngest to play there. 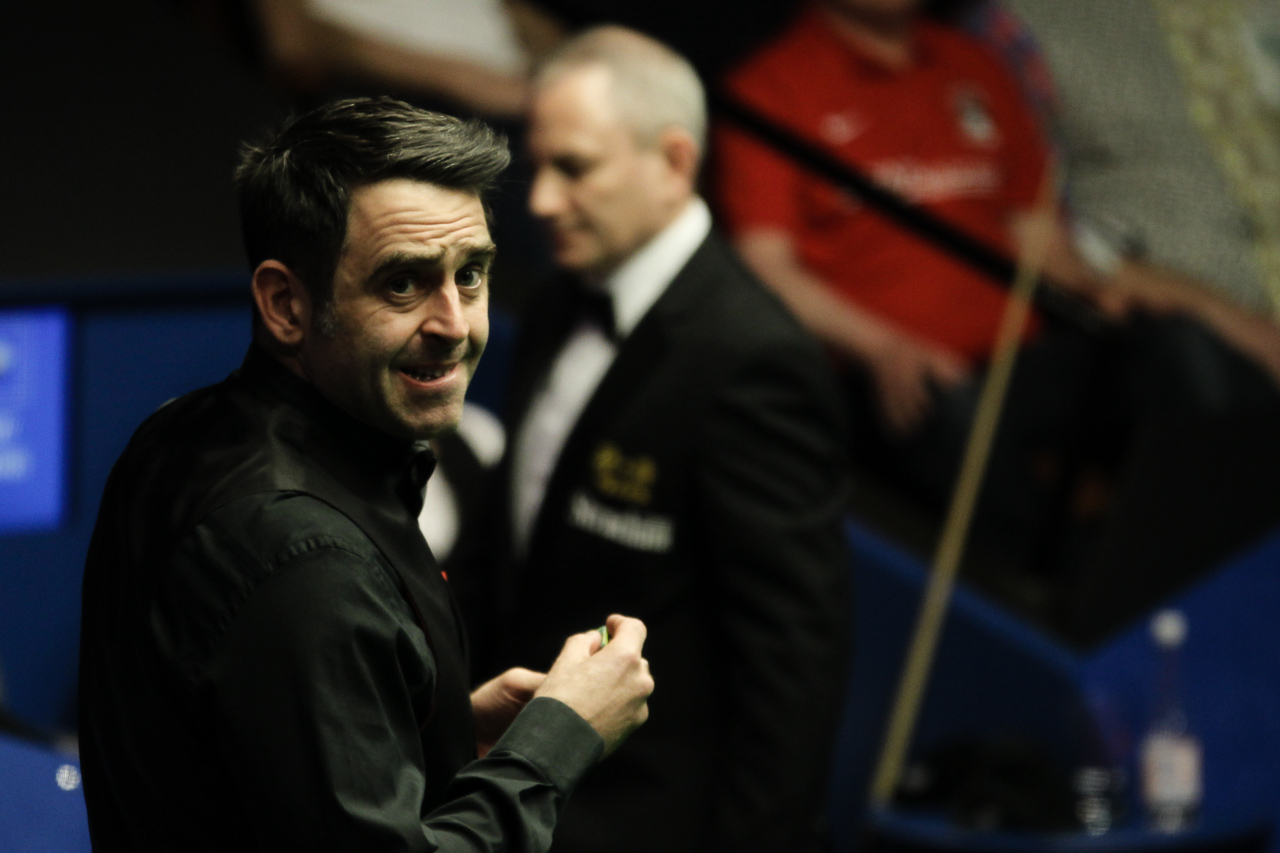 O’Sullivan, like several other players who would ultimately become legends, began his Crucible career with an immediate defeat, 10-7 to Alan McManus, who would go on to reach the semi-finals. The year ended, though, with his capture of the UK Championship. A star had arrived, and he would burn brightly for the next quarter of a century and counting.

At 44, he is now a veteran. If O’Sullivan wins his first round encounter at the rescheduled World Championship, his second round match will be the 100th he has played in the competition. Only Steve Davis and Jimmy White have mustered more.

His Crucible years have seen it all – the good, the bad and the ugly. Stephen Hendry, of course, has the magnificent seven but O’Sullivan still has bullets to fire.

If you were searching for a microcosm of O’Sullivan’s whole career then the contrast between the 1996 and ’97 championships would be as good a place as any to look. In ’96, he played a bad tempered first round match against Alain Robidoux, who objected to O’Sullivan playing left-handed – and presumably to him playing really well left-handed. The match ended absurdly as Robidoux played on needing dozens of snookers on the pink, which O’Sullivan continually refused to pot. (This gave rise to a ridiculous myth that O’Sullivan was then summoned to play Rex Williams at a tribunal to prove he could play left-handed. This never happened.)

Worse was to come when an altercation in the media centre saw him physically assault a tournament official, meaning his continuation in the event was placed in doubt. He was allowed to play on but something was clearly wrong. Looking at pictures of the time, he appeared overweight and in a bad place. A year later, he was a slimmed down, handsome 21 year-old who strode into the arena and made a maximum break clocked at a record five minutes, 20 seconds. Subsequent timings have the break even quicker at five minutes, eight seconds.

This was style, it was class, it was an audacious exhibition of skill. Ronnie was back in everyone’s good books. He was box office. From then on, he became the Crucible’s leading attraction.

Even on the rare occasions he has made early exits, he has still played well. He made five centuries against David Gray in the first round in 2000 and lost 10-9. He made a maximum against Marco Fu in 2003 and lost 10-6. There have also been serious missteps, such as his ungracious verbal attack on Hendry before their 2002 semi-final, which inevitably backfired when he was defeated.

The previous year, O’Sullivan had won his first world title at what for him seemed like the grand old age of 25. He had seen his two great contemporaries, John Higgins and Mark Williams, get there before him. On the final night of the 2001 championship, preparing to play Higgins, he watched from backstage as Jimmy White was invited – absurdly – to join the parade of former champions on the basis that he was the ‘people’s champion.’ O’Sullivan resolved never to be put in that position.

He beat Higgins 18-14, a proper win over a proper player, and the duck was broken. More titles followed in 2004, 2008 and 2012. He had joined the pantheon of greats as a multiple world champion.

Yet by then the relentless grind of the circuit had become too much. After long threatening to put his cue down, he did just that for an entire season, apart from a low key PTC. He eventually came out of hibernation, turning up one night at the Masters. With trademark contrarianism it was to watch Mark Selby v Graeme Dott, two players he did not enjoy playing. And what he realised was that he had missed the buzz of being at tournaments. He had missed the thrill of competition. 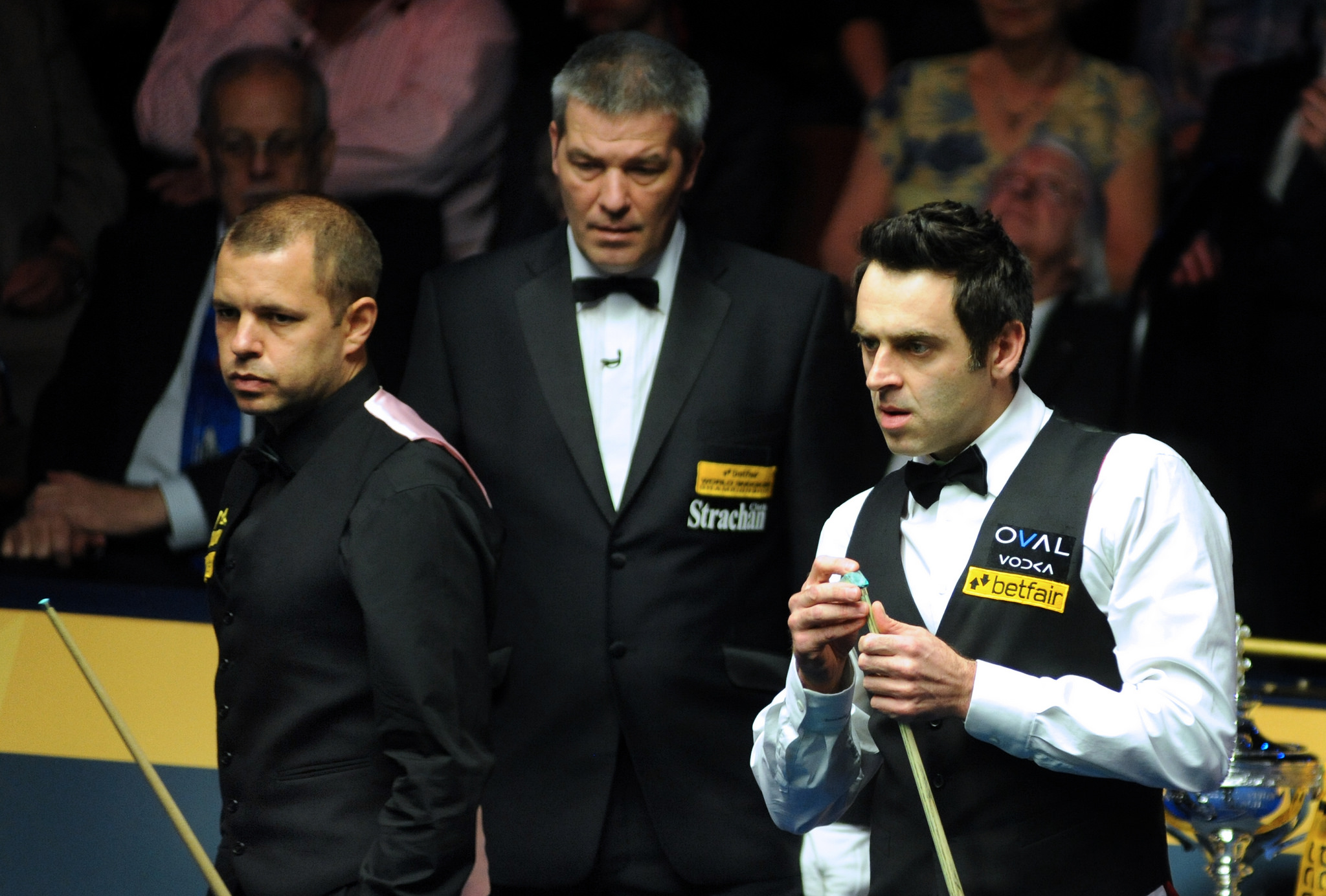 So he came back and he won again at the Crucible in 2013, perhaps his greatest achievement and proof of his powers of intimidation. The king across the water had retained his crown. Hendry’s record was now in sight.

Glory and despair are the two extreme sides of the sporting coin. In 2014, O’Sullivan’s defeat to Selby was a taste of that other side and a defining moment of the decade for both. Selby has gone on to win two more world titles so far. O’Sullivan has not even been back in the one-table set-up since.

Listen to his interviews about the World Championship these past few years and you will hear O’Sullivan talk in terms of it being a slog. This seed was surely planted in the manner of the Selby defeat, O’Sullivan’s first in a world final. The painful realisation was that you can be the best player for 16 days and still lose on the 17th. All that effort – begun long before the opening Saturday – and for what?

Ever since, he has lost each year to players he usually beats – Bingham, Hawkins, Ding, Carter. Last year he was humbled in round one by James Cahill, playing under amateur status. 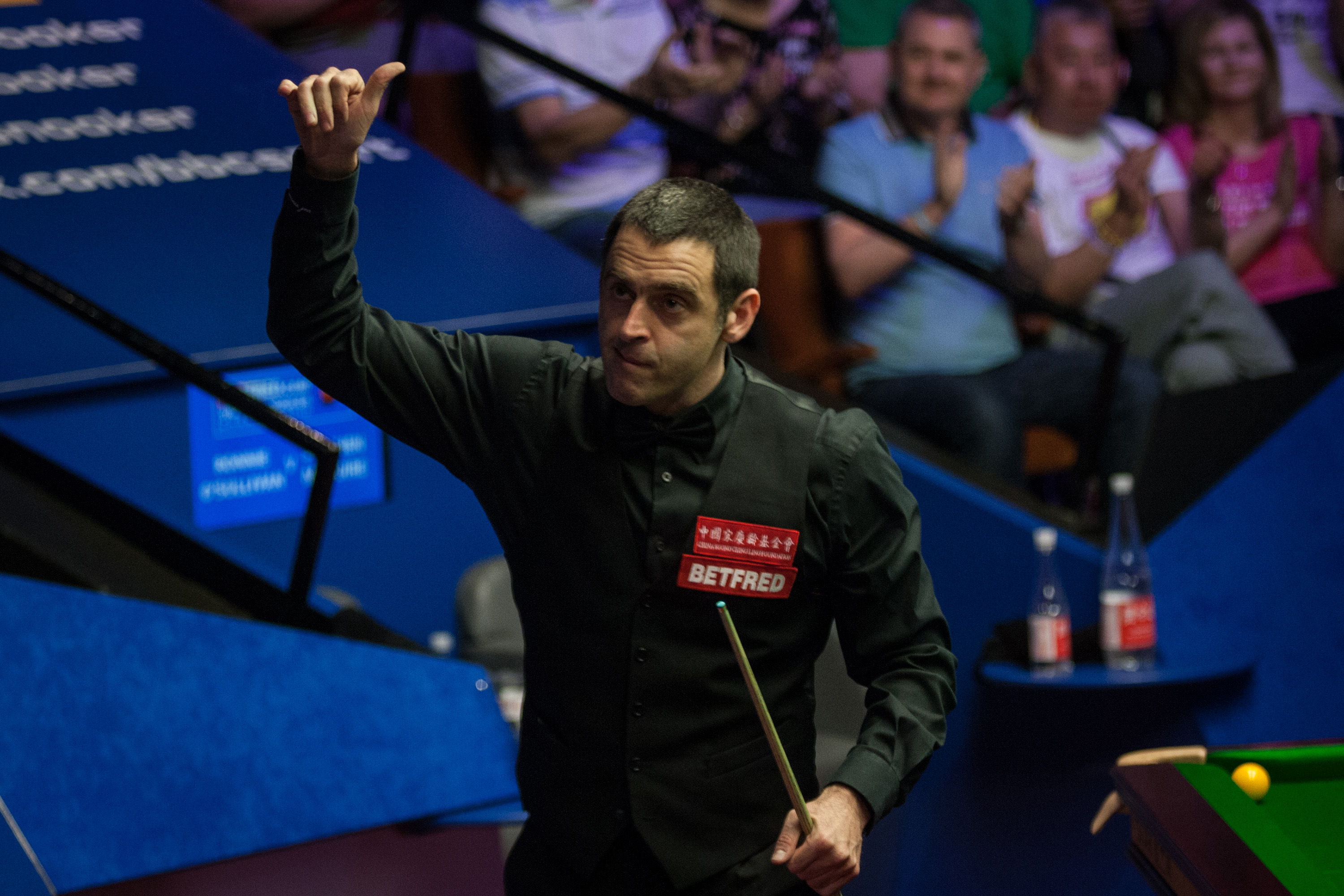 The World Championship serves up pressure like no other tournament, not just in the intensity of its matches but in the goldfish bowl of scrutiny the players are under, none more so than O’Sullivan. His every word, his every gesture is pounced upon, ready to be analysed, judged and, at times, wilfully misinterpreted. There have been years when he has lost at the Crucible and it has seemed like a relief.

So what of the future? Only a fool would write off the true greats. Williams came good again. Higgins keeps reaching the world final regardless of his form. Despite recent setbacks at the home of snooker, a sixth world title for O’Sullivan cannot be discounted, and if a sixth then why not a seventh? Age, possibly, will be a factor, as well as hungrier younger players but maybe the changed nature of this year’s event can be an advantage. Who knows? Nobody really knows with Ronnie O’Sullivan.

Why? Because there has never been anyone quite like him. He is still something of an enigma and therefore for many represents a canvas on which to project their own emotions. His vulnerabilities are a reminder of our own frailties. Such candid lapses of control are rare in the great champions of sport, whose very legend is built on their ability to remain focused and resolute.

He splits opinion. Many people don’t like the way he speaks or acts at times or how he hogs the limelight, but if you’ve seen him play, then you have seen something special. All the rest is really just noise, which will have quieted long before the memories of his performances dim from view.

Matthew Spade saw it up close back in the summer of ’92. Multitudes have seen it since. Many snooker fans hope to be seeing it for years to come yet.