Judd Trump survived a scare and progressed to round 2 with a 10-8 win over Tom Ford. Here are the reports by WST.

Defending champion Judd Trump has work to do in his first round clash on day one of the Betfred World Championship, trailing Tom Ford 5-4 after the opening session.

World number one Trump, who has won a record six ranking titles this season, is aiming to become the first maiden winner of the event to defend his title the following year.

Trump secured the world crown in the most emphatic fashion possible in 2019. He stormed to an 18-9 demolition of four-time Crucible king John Higgins in the final to seal his first World Championship win.

Ford, ranked 26th in the world, defeated Gerard Greene and Stuart Carrington at qualifying to secure his place in the final stages at the Crucible. He’s compiled two 147 breaks this season and had a golden opportunity to add a third in the first frame this morning.

With just two open reds left on the table, Ford missed a black and broke down on 97. He then took the second frame with a break of 53, before adding a third to move into a surprise early 3-0 advantage. Crucially, Trump remained in touch heading into the mid-session with a century run of 104.

The Ace in the Pack closed the gap further when play resumed, a break of 61 allowed him to pull within one at 3-2. However, Ford emphatically responded with breaks of 140 and 61, to re-establish his three-frame cushion at 5-2. Trump then claimed the eighth, before a dramatic last frame of the session.

Ford had led 48-0, but missed a straightforward pink and allowed Trump to clear with 61 to set up an intriguing final session at 7pm.

On the other table, 2015 World Champion Stuart Bingham emerged with a narrow 5-4 lead over Crucible debutant Ashley Carty.

By coming through qualifying earlier this week, Carty saved himself from relegation off the professional circuit. Bingham has had an up and down season, but did secure his maiden Masters title with victory at Alexandra Palace in January.

Bingham had taken control in the early stages to move into a 4-2 lead. However, world number 82 Carty wasn’t intimidated on his first appearance at the Crucible. He took two of the last three frames, with breaks of 118 and 69, to end just a frame behind heading into tomorrow morning’s concluding session.

Judd Trump came from 5-2 down to beat Tom Ford 10-8 in a tough opening to his Betfred World Championship title defence – and in doing so became only the second player to make 100 centuries in a single season. 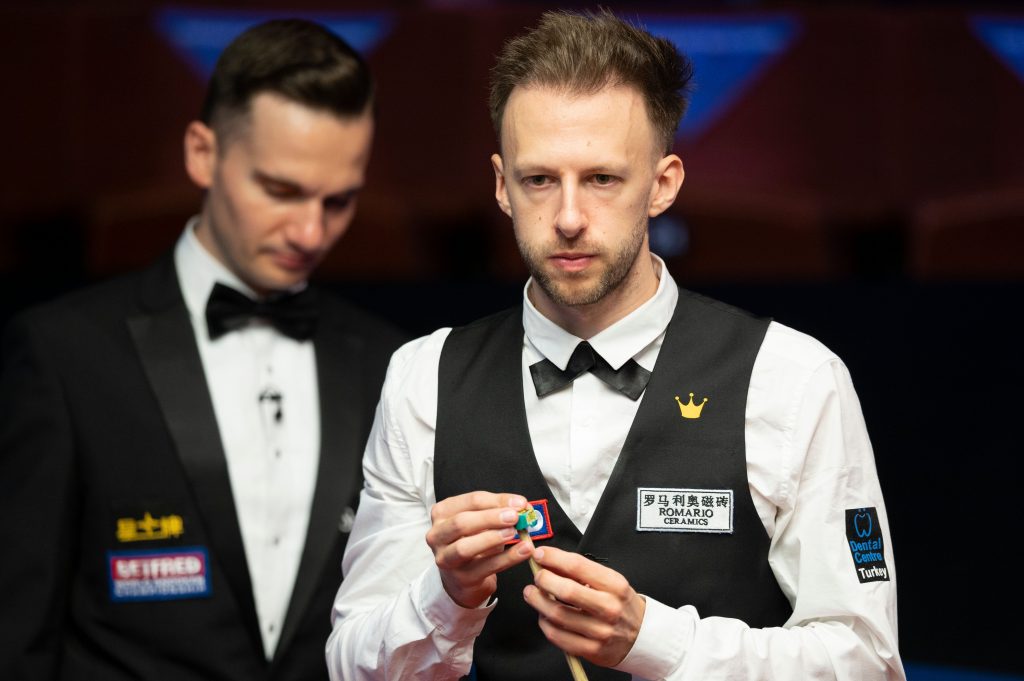 When he trailed 3-0, 5-2 and 6-4, Trump was in danger of becoming the latest victim of the Curse of the Crucible; no first-time winner has ever successful retained the title the following year. But he grew stronger as the match progressed and, in the end, was a comfortable winner as he booked a last 16 meeting with Yan Bingtao or Elliot Slessor.

World number one Trump arrived in Sheffield as the first player to win six ranking titles in a single season and will now feel confident of setting new landmarks over the coming fortnight.

Bristol’s Trump took the last two frames of the first session to trail just 5-4 coming into tonight’s conclusion.  Ford made a 48 clearance to take the opener before Trump’s run of 63 made it 6-5. Late in frame 12, Ford missed a crucial green to a baulk corner, and his opponent snatched it by potting brown and blue. Trump took the lead for the first time with a break of 70 before Ford hit back to go 7-7.

“It was a bit of a struggle to get going this morning,” said Trump. “I was happy to be only 5-4 down then towards the end tonight I was making less mistakes and scoring more heavily. The first match here is always hard. I’ll go home now to regroup and when I come up the second time I will be more relaxed.

“It’s nice to be in the exclusive club to make 100 centuries in a season though it would have been more special for Neil because he was the first to do it. If I do well in the tournament I should beat his record.” 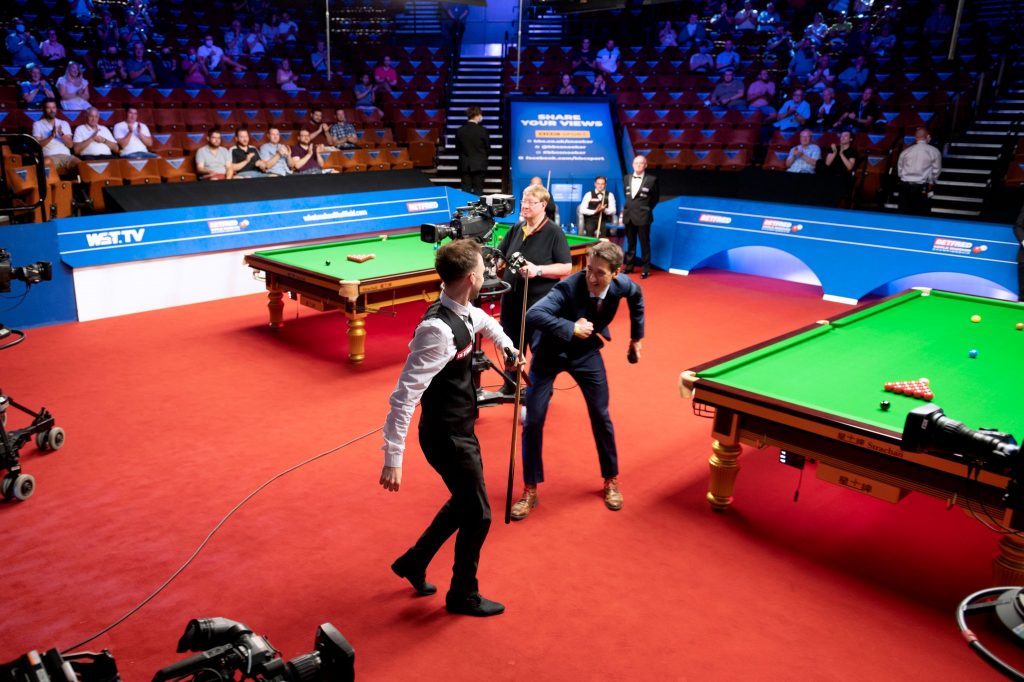 Trump was disappointed by today’s announcement that there would be no fans at the Crucible until at least August 15th, but was pleased to be among the small handful of players today to witness the reduced crowd.

“I felt very safe, the layout was superb and it was a good atmosphere,” he added. “It was great to be introduced as World Champion in front of my family, at least I got to experience that.”

On the other table, Alan McManus established a 5-4 lead over three-time World Champion Mark Williams after their first session. Scotland’s McManus is competing at the Crucible for the first time since his epic run to the semi-finals in 2016. He had the first opportunities in both of the opening two frames, but it was Williams who moved 2-0 up with runs of 47 and 70.

From that point 1994 Masters champion McManus assumed control. The 49-year-old fired in breaks of 105 and 84 to draw level and head to the interval at 2-2. When they returned, McManus made it three on the bounce in a dramatic finish to the fifth frame as Williams missed the final pink to a top corner, leaving it for McManus to move 3-2 ahead.

Welshman Williams restored parity with a break of 60, but two frames on the bounce from McManus saw him move 5-3 ahead. Williams claimed the last frame of the session with a break of 68 to reduce his deficit ahead of the conclusion tomorrow evening at 7pm.

Judd Trump didn’t play well at all during the first session. Whatever he told the press ahead of the Championship, he felt the pressure. He played better, but yet not great in the second session. Tom Ford could certainly have won this match, and he probably would have if it had been played at the EIS without a crowd, rather than on TV in the Crucible Theatre on the opening day of the World Championship. Tom is an excellent player but remains vunerable under pressure. That is unlikely to change and is part of what separates the very good players from the winners.

Judd Trump had been very critical of Anthony Hamilton, branding him “selfish”, and suggested that Ronnie should withdraw too, claiming that he’s the “only one who doesn’t need the money” – which frankly coming from the man who has earned £1,094,900 at the table only (not counting sponsoring) last season and already £909,600 this season is … “rich”. He claims that he felt very safe.

Ahead of the event, Rob Walker recorded this short video, introducing us to the safety measures in place:

There is no doubt that WST and WPBSA have made every effort to keep everyone safe, and I can see why Judd Trump feels safe. But he is missing the point. The problem is that as soon as you introduce a crowd – and we are talking about a possible 350 persons here – you are taking risks and things are not under your control. You rely on eveyone being sensible and socially concerned. Yesterday, prior to the announcement, very few were wearing at mask while seated.  With the virus being airborne, and the ventilation being done through the air conditioning, one infected person has the potential to spread the the virus everywhere in the Crucible arena pretty quickly, despite social distancing.  That person might even be asymptomatic and totally unaware of their condition. Fans – and players – are sat there for hours, plenty of time to get contaminated.

All the other matches that started yesterday, produced a 5-4 score after the first session:

They will all conclude today.