The last 16 round started yesterday, as the last 32 round concluded. There were only two sessions played as the tables were recovered in the morning

The conclusion of the last 32 offered no surprise. 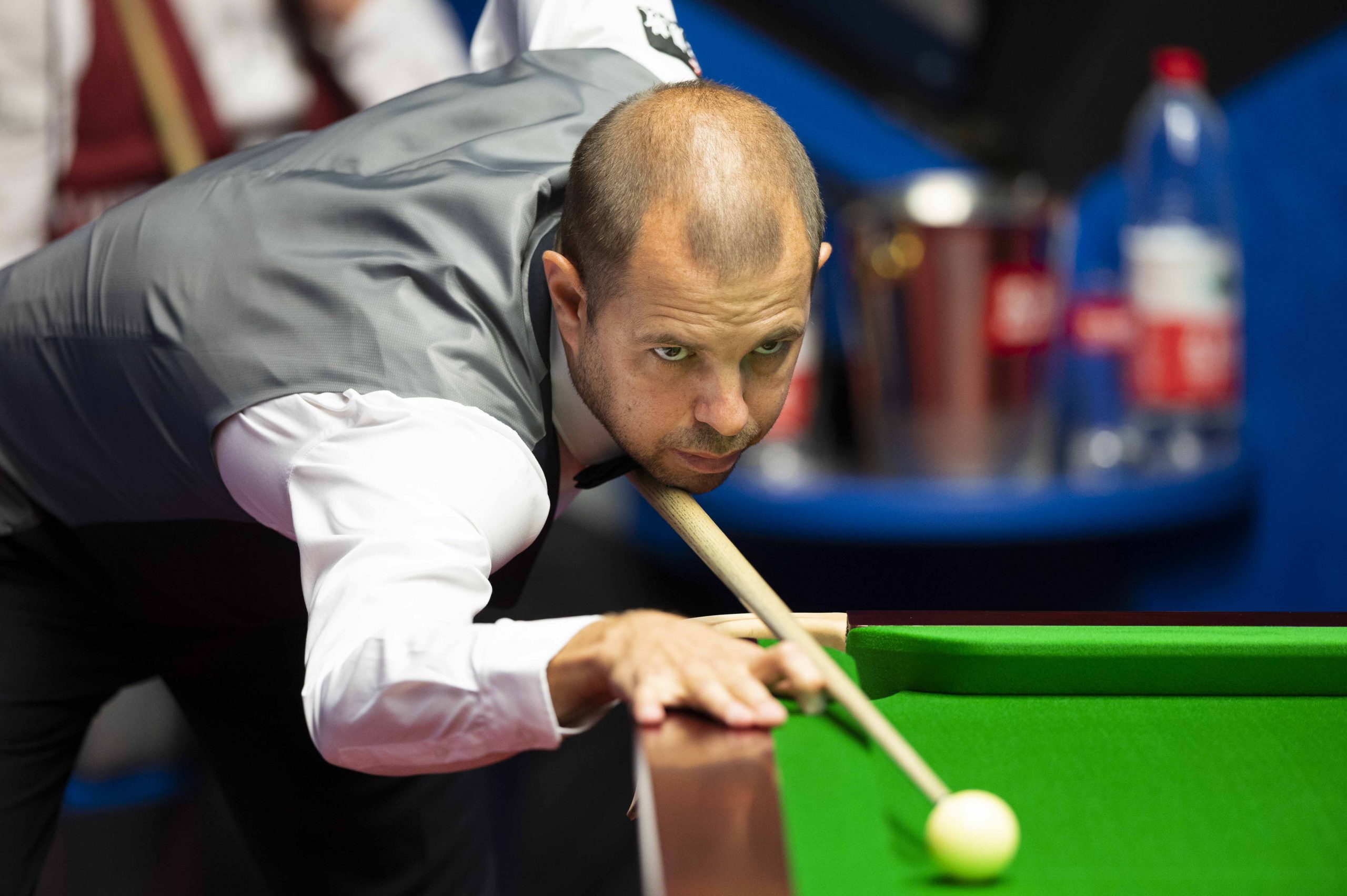 Barry Hawkins eased to a 10-2 demolition of Switzerland’s Alexander Ursenbacher to reach the second round of the Betfred World Championship.

Hawkins holds a phenomenal Crucible record, today’s victory marks his 10th consecutive first round win at snooker’s Theatre of Dreams. He’s reached four World Championship semi-finals and a final and has now won 20 of his last 27 matches at the Sheffield event.

Next up Hawkins will face a mouth-watering clash against world number two Neil Robertson. They last met at the Crucible in 2015, when Hawkins edged a thrilling quarter-final meeting 13-12.

It was a steep learning curve for debutant Ursenbacher. However, he did make history by becoming the first Swiss player to reach the Crucible, after a narrow 10-8 win over Andrew Higginson in the final round of qualifying.

Hawkins came into this afternoon’s concluding session with a hefty 7-2 advantage. He made swift work of getting over the line this afternoon. Breaks of 84 and 53 helped him to three frames on the bounce, which sealed the 10-2 win.

Hawkins said: “I know he is a dangerous player and when he gets going, he goes for his shots. I felt like if I kept him tight, I would get my chances this way. A bit more experience under his belt he might develop his all-round game. It’s tough coming here first time. I lost 10-1 coming here first time. He did better than I did.

“The last few years I’ve managed to play some good stuff here. I’ve had some unbelievable matches along the way and I’d like to continue that nice form and that good record. But even getting to the quarters or the semis, you are still going home a loser and you are still not picking up the trophy. I’ll keep trying and see where it takes me.

“It is very strange out there. I found if very hard to concentrate yesterday. In spells I did, but in patches I felt quite flat. I would rather be here playing than not. You just have to remind yourself it is the World Championship, get your head down and give it your all.

“Neil has been in fantastic form this season and got himself back up to number two in the world. He is one of those players that can get on a roll and just steamroll you. HIs long potting is fantastic and his record shows that. It is a tough game, you can’t ask for much harder in the second round. If you have any aspirations of winning this tournament, you need to step up and beat them all. Especially players like Neil. I’m looking forward to seeing where my game is at.”

And in the evening, Martin Gould finished Stephen Maguire off (source WST)

If Gould had lost his first qualifying match last month he would have been relegated from the pro tour and facing at least a year away from the circuit, as he had not entered Q School. But having scored three victories to make it to the Crucible, the talented 38-year-old is now on the crest of a wave. He made four centuries in a tremendous display against Maguire as he set up a second round match with Kyren Wilson. 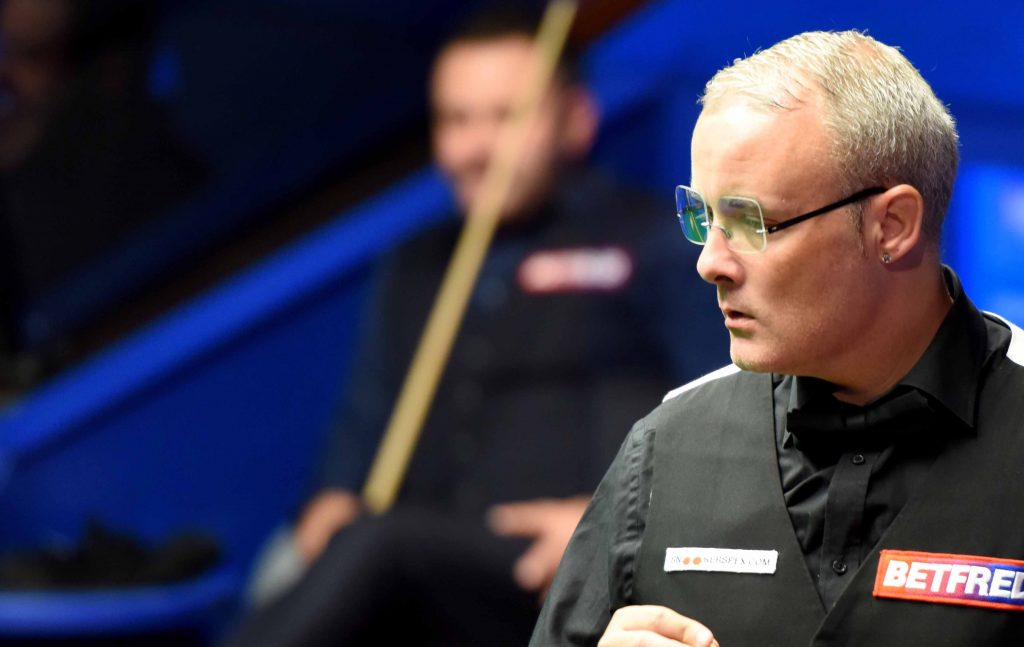 Londoner Gould is through to the last 16 in Sheffield for the third time, having reached the same stage in 2010 and 2011. He won the German Masters in 2016 but subsequently suffered a slump in form which has seen him drop to 60th in the world. This is his first run to the last 16 of a ranking event for nearly two years.

Glasgow’s Maguire came into this event as one of the favourites having won the Tour Championship in June. But he couldn’t replicate that form and has now lost in the first round nine times in 17 Crucible appearances 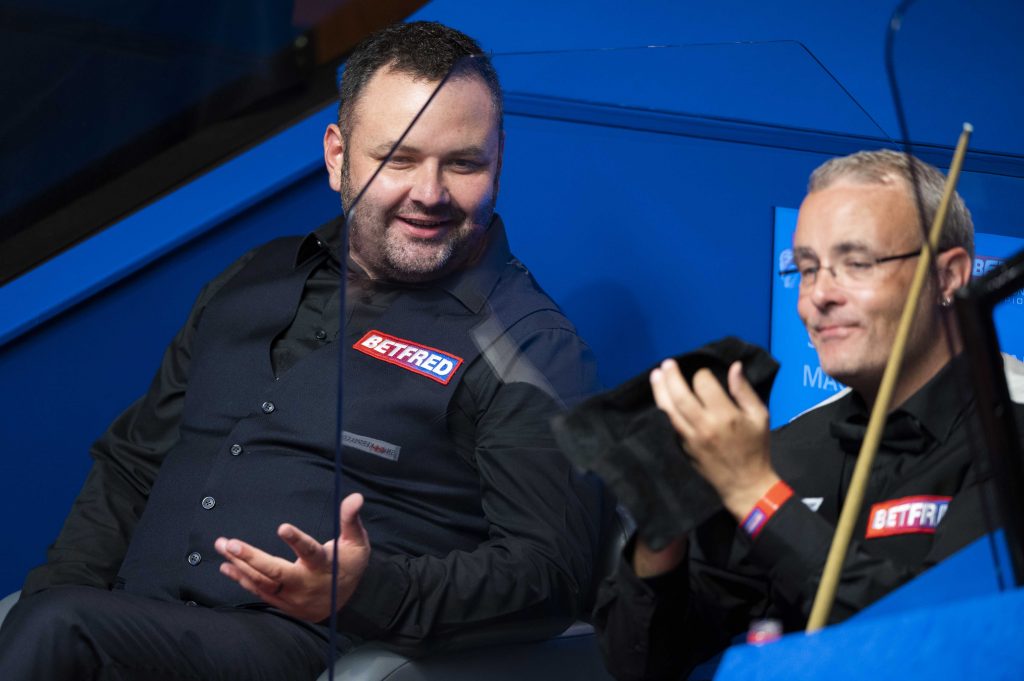 Maguire set about a 147 attempt in frame 12 and got to 96 before losing position with three reds left.  That made it 9-3 but Gould took frame 13 with a run of 51 to seal his sixth win in as many meetings with Maguire.

“I loved it out there,” said Gould. “I haven’t enjoyed snooker for the last couple of years but I did tonight. I played really well in the first session, it just felt like a practice match. My form has been there waiting to come out, and in the first session everything came together, it was one of the best matches I have played. Stephen brings the best out of me because I always know I have to play well to beat him.

“I don’t want the run to end here. Kyren will be a tough opponent and I’ll look forward to that challenge.”

This is so strange. Results in the 2020 CLS and the 2020 Tour Championship seem to mean nothing this week. Stephen Maguire won the Tour Championship, he played really great, and here he comes and gets outplayed by someone who was on the verge of relegation.

That said ,Martin Gould on form is a fantastic player. He’s been struggling with mental health issues in recent times, as he explained in his postmatch, speaking to the BBC

“I found it difficult at the start. It took someone realising I had a problem to come out and ask me.

“Once I felt comfortable speaking to that person, they helped me get to the next avenue of who I needed to speak to.

“It is very difficult for males to speak up, but there is nothing to be ashamed of really.”

Before the tournament, Gould said the coronavirus lockdown “saved” him from falling “completely out of love with the game”.

“It got to the point where you don’t enjoy what you are doing and you don’t want to do it,” he said.

“I spoke to World Snooker Tour and some family and close friends and they helped me out a huge amount.

“I am enjoying playing at the moment and long may that continue because the more I enjoy it the better I play.”

Two last 16 matches started yesterday as well. Those matches are played over three sessions. Here are the reports by WST.

Maflin’s thrilling 10-8 victory over David Gilbert in the opening round was his first ever win at the Crucible. His only other trip to snooker’s Theatre of Dreams ended in a 10-9 defeat against Mark Selby in 2015.

Scotland’s Higgins is bidding for a fifth world title and a fourth consecutive appearance in the Crucible final. He booked his place in the second round with a 10-5 win over Matthew Stevens.

Higgins took control in the early exchanges this afternoon, claiming the opening two frames with breaks of 53 and 69. Maflin responded with a contribution of 79, before claiming the fourth frame to draw level at 2-2.

The Norwegian then made it four frames on the bounce, to lead 4-2. Higgins replied with a fine century run of 101 to pull within a frame. However, Maflin re-established his two-frame cushion with a break of 81 to lead 5-3.

They will return for the second of three sessions tomorrow morning at 10am.

After a slow start, Kurt played really well. It’s a strange thing about John Higgins for me. Although I can see and appreciate his considerable skills, i get bored watching him pretty quickly. I’m not sure why.

Mark Williams took a 5-3 lead over Stuart Bingham in the first session of their Betfred World Championship second round meeting. 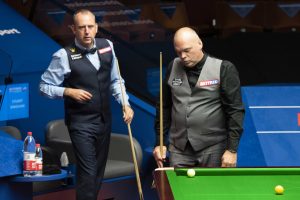 There is an abundance of experience between the pair as they have four world titles and 36 Crucible appearances between them, though this is the first time they have met in this event.

The first four frames were shared, neither player making a break over 50. Williams, the 2000, 2003 and 2018 champion, then stepped up a gear with breaks of 97 and 90 to lead 4-2. The Welshman also took frame seven, getting the better of a safety battle on the penultimate red, to extend his lead.

Basildon’s Bingham, who took the trophy in 2015, made a 57 in the last frame of the session to stay in touch. They play eight more frames on Thursday from 2.30pm, with the concluding session on Friday morning.

I won’t go as far as to say that those two played like club players with no eyes yesterday evening, but the standard was surprisingly poor, especially before the MSI. This is a second round match between two former World Champions at the Crucible and for the best part of it they both struggled to build any telling break and were missing all sorts. Then Willo seemed to find a bit of something  but was still far from his best.

Both Mark Williams and Martin Gould expressed reservations regarding the “canned applause”. I can see why. It must be very weird to hear applause whilst in an empty arena, It’s not that bad on televion because, most of the time, the camera focussed on the table. Panning through empty seats whilst applause are heard would feel very, very strange indeed.

This is the menu for today …

Judd Trump, speaking to Eurosport, has apparently been piling praise on his young opponent despite the fact that he has beaten him five times out of five matches they played.

‘He’s certainly doing much better than anyone else for his age, he’s probably five or 10 years ahead of anyone,’ said Trump earlier this season.

‘If he can keep progressing the way he is, he looks like he wants to learn, he’s taking everything in, enjoying himself out there and he looks like he practices very hard so I think over the next couple of years he’ll really break through and win some big events.’

“he (Yan) is very mature for his age and he doesn’t go for anything stupid. He takes his time and he has certainly got a chance of being world champion in the future.”

“It’s also good to have young players coming through. It keeps you on your toes and it’s nice to have the 40-plus players not winning everything all the time.”

“The future of the game is in really good hands with these Chinese players, and in the future there will certainly be a more even ratio of players from China and the UK.”