Skip to content
HomeOn Day 13 at the 2020 Crucible – SF -Ronnie and McGill in the lead after their first sessions.

We are at the ever magnificent one table setup …

There were two sessions played yesterday.

Qualifier Anthony McGill set himself on course for a surprise semi-final win over Kyren Wilson at the Betfred World Championship as he took a 6-2 lead in the first session.

Scotland’s McGill, who played 67 out of a possible 69 frames in three tight matches at the Crucible up to the quarter-finals, has looked the stronger player so far against Wilson. 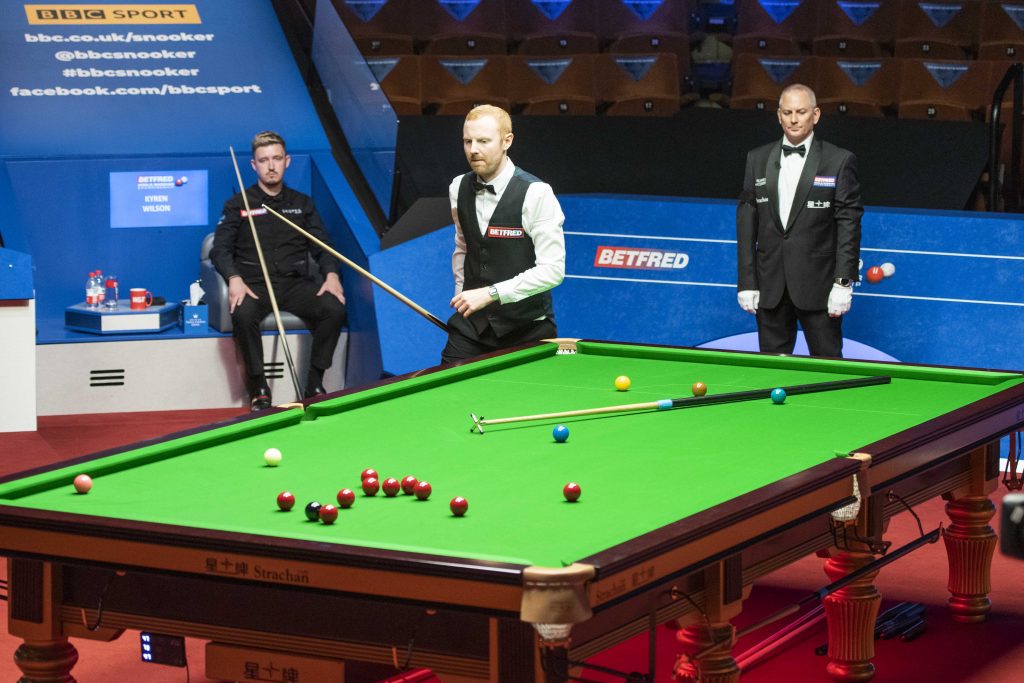 World number 39 McGill is looking to become the ninth player in Crucible history to reach the final having come through the qualifying rounds. He would be the lowest ranked finalist other than Shaun Murphy who was 48th in 2005, and Terry Griffiths who was unranked in 1979.

Eighth seed Wilson played superb snooker to beat Judd Trump in the quarter-finals, but the Kettering cueman has not got going so far in his second Crucible semi-final.

Breaks of 83 and 78 gave McGill the first two frames and he got the better of a safety battle on the green in the third to go 3-0 up. Wilson made a run of 50 as he pulled one back but McGill took frame five in two scoring visits for 4-1. Wilson had first chance in frame six but only made 32 and his opponent replied with 69 to extend his lead.

McGill had a golden chance to win the seventh from 45-0 behind but missed the blue to a centre pocket off the last red on 41, allowing Wilson to reduce his deficit. But McGill shrugged off that setback and took the last of the session with a 92, equalling his highest break of the tournament so far.

They resume at 10am on Friday for eight more frames. First to 17 goes through to the final to face Mark Selby or Ronnie O’Sullivan.

Kyren Wilson didn’t play well at all during the first minisession. I can’t speak for the second as I didn’t see it. Anthony McGill on the other hand looked unspectacular but extremely efficient and reliable. How come that Kyren who looked so strong the day before seemed to struggle badly yesterday? First of all, of course, it’s another day and form isn’t a tap that players can turn on and off at will. The conditions vere different, the table has been moved and recovered and the setup is different. Watching on TV, I barely felt the Crucible emptiness until yesterday. But yesterday I definitely did: it’s now a vast open space … devoid of spectators. Maybe that change of atmosphere also had an impact on the players. And, finally, there is the fact that, against Judd Trump, he was the underdog, now he’s the one who’s expected to win. It’s a completely different mindset and pressure. But it’s a long match … plenty of time to regroup and recover.

In the evening, Ronnie took a 5-3 lead over Mark Selby (WST report)

Ronnie O’Sullivan holds a 5-3 lead over Mark Selby after the first session of their Betfred World Championship semi-final.

The much anticipated clash between two of snooker’s all-time greats has not lived up to expectations so far, with both players making mistakes, but it is sure to be an intriguing battle over the next two days.

Three-time champion Selby has won both previous meetings with O’Sullivan at the Crucible, in the 2010 quarter-finals and the 2014 final. The latter was the last time that O’Sullivan appeared in the one-table situation in Sheffield.

Selby had first chance in the opening frame and missed a red on 31, letting his opponent in for 59 which helped him go 1-0 up. The key moment in the second came when Selby missed an attempted plant on a red on 39, and O’Sullivan took advantage to double his lead. Leicester’s Selby took a scrappy third thanks to an excellent pot on the last red to a top corner.

In frame four, Selby was on 34 when he missed a red to a centre pocket, and five-time champion O’Sullivan made an 84 to lead 3-1 at the interval. Breaks of 51 and 79 saw the Rocket go further ahead. Frame six came down to the last red and a failed attempt at a long pot from O’Sullivan allowed Selby to claw one back.

A run of 58 helped O’Sullivan go 5-2 ahead and he looked huge favourite to win the eighth when he led 51-0 with the remaining balls in unpromising positions. But gritty Selby edged back into the frame and eventually converted a superb pot on the last red and cleared to narrow the gap to just two overnight.

They play eight more frames on Thursday from 2.30pm, with the third and fourth sessions on Friday. First to 17 frames goes through to the final to play Kyren Wilson or Anthony McGill.

Ronnie looked very focused and determined yesterday evening, taking his time over his shots and certainly not going for anything outlandish. He’s still not going defensive though … here are the numbers:

Mark Selby’s highest break was a mere 39, but he’s still only trailing only by two frames. Just a testimonny of how hard a match player he is.

Both players had a lot of kicks in this first session and you could clearly see Ronnie’s frustration at times, although he didn’t act on it, except for an unconsequential cue bang. Ronnie has reverted to the traditional chalk after several miscues cost him in his QF match. Dennis Taylor suggested that this might be the cause of the kicks, but frankly I doubt it, because all these years Ronnie has been playing with that type of chalk and he never was one to get plenty of kicks. More likely, the general conditions in the room played a part, as Ken Doherty suggested: very hot outside, air conditioning working quite “hard” inside. He compared it to the conditions they have at some Chinese events.

There was report on those incidents in the press today

After both players suffered a series of bad cue ball contacts in the third frame, O’Sullivan told referee Paul Collier: “I’ve never had kicks like that before in my life.”

Tournament officials took the unusual step of changing the balls during the mid-session interval and the kicks appeared to subside, with O’Sullivan fashioning an overnight advantage which ought to have been much more comprehensive.

Players and pundits including six-time runner-up Jimmy White have suggested the warm weather may be a factor in the increased incidences of contact issues this year.

Ahead of this match Ronnie made the headlines … in some tennis magazine.

Snooker legend Ronnie O’Sullivan has hailed Novak Djokovic as the perfect example to follow if you want to win the biggest tournaments.

O’Sullivan is widely regarded as the most talented player to ever pick up a cue, although he has failed to deliver as many world titles as most would expect.

That has often been put down to him lacking the mentality to go with his talent, but as he chases what would be a sixth world title this week, he has found inspiration in tennis’ current number one.

“I probably need to be like a Novak Djokovic,” Ronnie O’Sullivan told Eurosport.

“He’s double solid, he does everything very well and he’s not going to give you anything.

“He’s not the most flamboyant, he’s not going to give you the Roger Federer brilliance or the Rafael Nadal forehand but he’s there from start to finish and his form doesn’t dip much.

I’ve always said to win in Sheffield you have to have that steady state type of game.”

9 thoughts on “On Day 13 at the 2020 Crucible – SF -Ronnie and McGill in the lead after their first sessions.”