Two rounds – the last 32 and the last 16 – were played yesterday at the 2020 European Masters in Milton Keynes. This was the outcome:

And here is the report by WST:

The pair met most recently in the World Championship semi-finals last month and contested an epic encounter. Wilson won a 61-minute final frame decider to reach his first Crucible final, where he fell short against Ronnie O’Sullivan.

Next up this week, Wilson faces the prospect of competing against another player he beat at the World Championship. He’ll meet rival and world number one Judd Trump in the quarter-finals tomorrow at 1pm. Trump whitewashed Jackson Page 5-0 to secure his progression.

This evening’s match saw Wilson enjoy a more comfortable victory than his previous meeting with McGill. The Warrior composed breaks of 120, 56 and 96 on his way to establishing a 4-0 advantage at the mid-session.

McGill took the following two frames with breaks of 52 and 75 to remain in the contest. However, Wilson put the tie beyond doubt when he embarked on a 147 attempt. The Kettering cueman broke down on the 13th black to end his run on 97, but that was enough to emerge a 5-2 victor.

Wilson said: “It is a really hectic schedule, so I hadn’t looked at who I was playing. I got a call from Martin Clark, the tournament director, he told me Anthony had just finished and we were going on at quarter-past seven. I realised I had McGill. It is quite soon since the World Championship. You just have to treat it as another game. It is the last 16 of a big event and I’m really pleased with that performance.

“It was an amazing game at the Crucible. The reaction I’ve had from the World Championship has been more about the semi-finals than anything else. It will be a game and a decider that will be remembered forever. It is nice to have been in a game like that.” 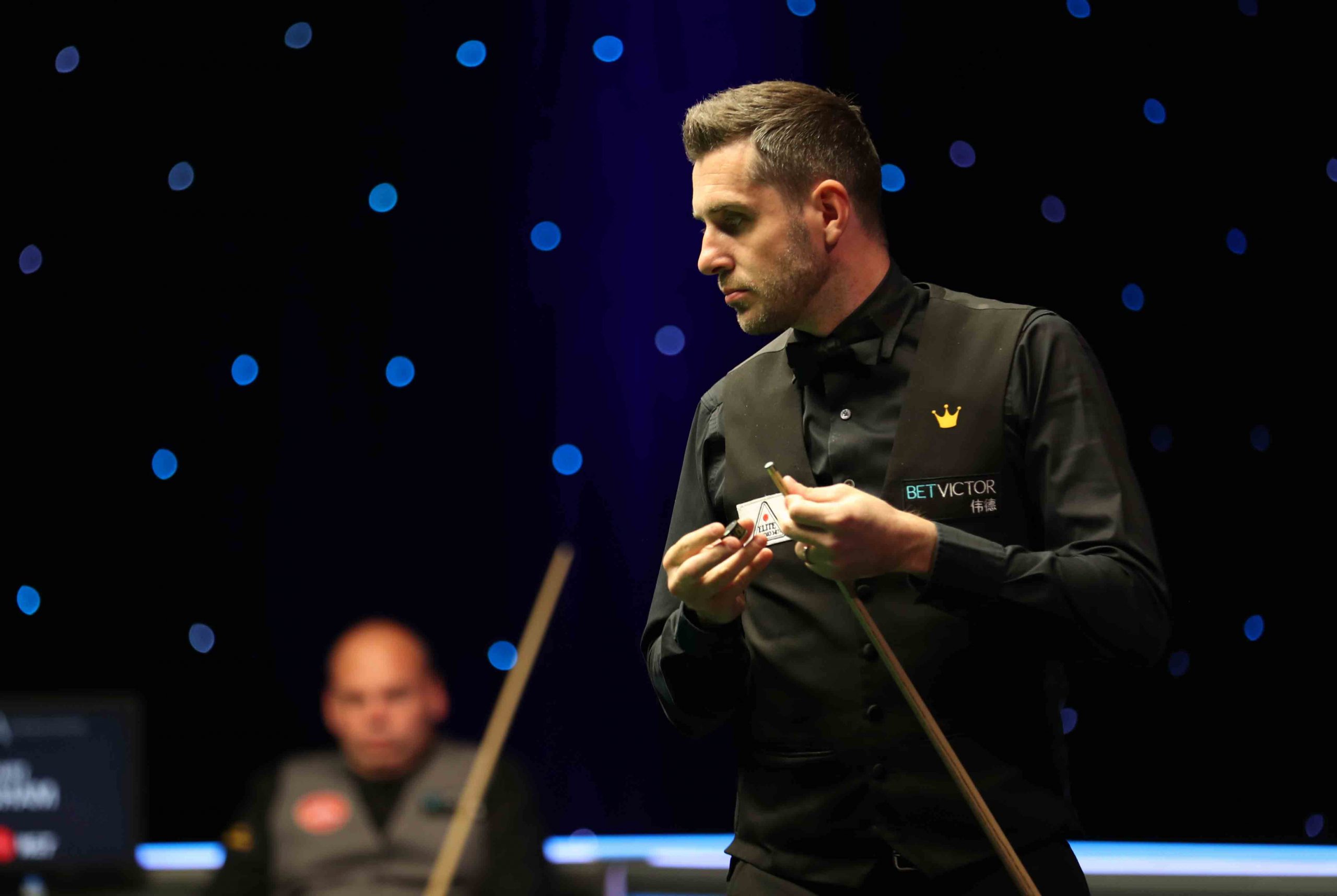 Mark Selby staged a tremendous fightback to beat Stuart Bingham 5-4, having trailed 4-1. The three-time Crucible king’s opponent in tomorrow’s quarter-finals will be Ding Junhui, who beat Mark Allen 5-2 this evening.

Leicester cueman Selby has had an unusual path to the last eight. He’s only played two matches, having received a bye in the first round after Michael White was required to self-isolate and this morning after opponent Mark Davis had his cue stolen.

Bingham started fastest this evening, missing the 15th red in a 147 attempt, ending up with a break of 113. Further runs of 132 and 64 helped Masters champion Bingham to establish his 4-1 lead.

However, from there Selby clicked into top gear and surged to the winning post, making contributions of 114, 72, 64 and 54 to claim four on the bounce and seal the 5-4 win.

The last 32 round made the news even before it even started … with this:

Mark Davis faces a future without the cue he had used for 20 years as it was stolen shortly before he was due to play in the BetVictor European Masters on Friday morning.

Davis was set for a third round clash with Mark Selby in Milton Keynes but had to pull out when he realised the cue had gone missing. 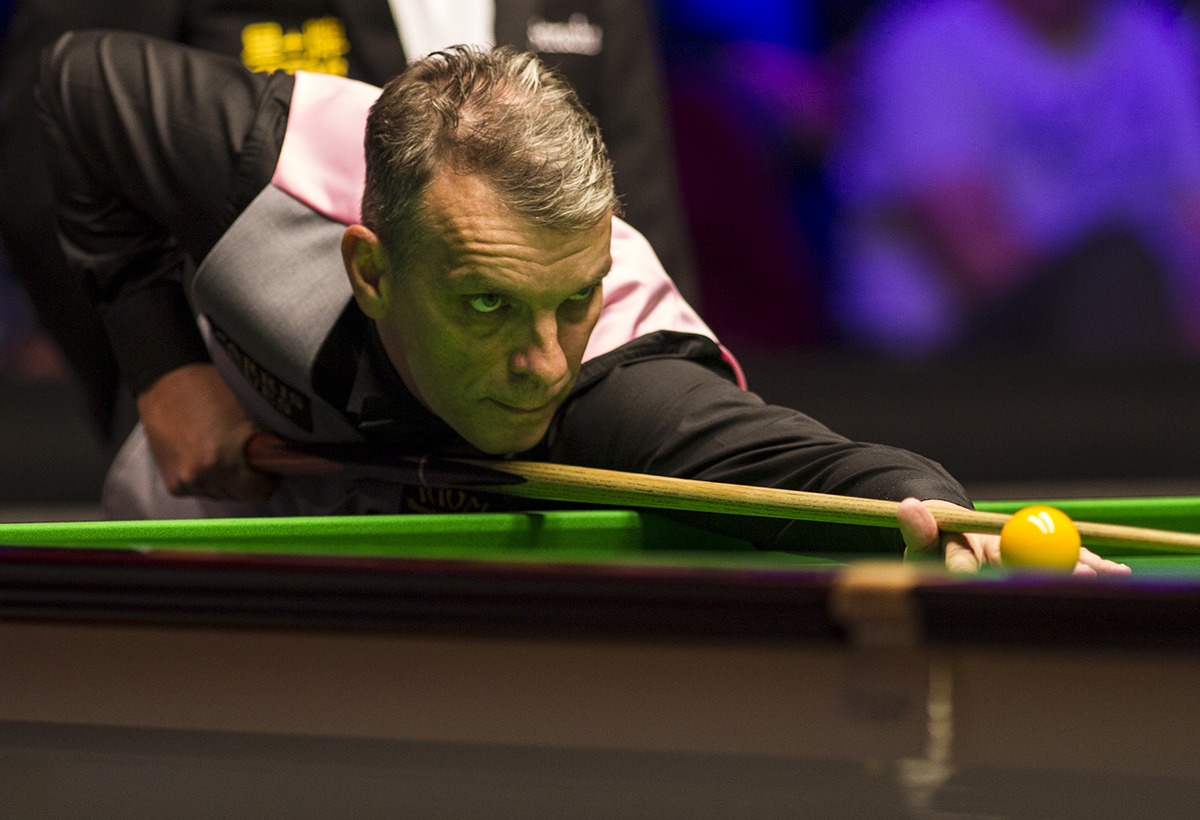 He had leant it against his car while putting his suitcase into the boot in his hotel car park. He went briefly to reception to check out, then returned to his car and drove to the venue, assuming that his cue was in the boot. It was only when he reached the venue he realised that the vital tool of his trade was not there.

“I rushed back to the hotel, asked in reception and even went to check my room, but I knew what had happened, the cue was gone,” said the 48-year-old from Sussex. “Someone must have seen it leaning against the car and nicked it. I was ridiculously stupid. I must have been on auto pilot and not paying attention to where I had put it. I realised I was going to have to pull out.

“My head is spinning and I am absolutely gutted, firstly because my cue is gone and secondly because I’ve had to withdraw from a tournament, which has hardly ever happened to me in nearly 30 years as a pro, and never for such a daft reason.”

The only silver lining for world number 39 Davis is that he has a replica cue at home, which was made for him by master craftsman John Parris.

“I had it made at a time when I was struggling and thinking of changing,” added the two-time Six Red World Champion. “I decided not to take the plunge and stuck with the same cue. But now it looks like I have no choice. Mentally, switching cues is a very tough thing to do and I don’t know how I will deal with it. I’ll have to start practising with it straight away and hope I can get used to it before the Championship League next week.”

Davis’s cue is a John Parris ash with a light brown butt. It is in a black three-quarter length case which has the names of his children, Millie and Jack, written on the side. Davis is offering a reward of £1,000 for the safe return of the cue. Anyone with relevant information can email him at markdavis2108@gmail.com

Several fellow snooker players shared the information on social media, in an attempt to help finding the cue, most notably Mark Williams.

There is no report on the last 32 round by the governing body, so here are a few thoughts on that round.

Stephen Maguire was beaten heavily by Tom Ford; the final score was 5-1 and, in the 5 frames he lost, the Scot only scored 38 points. Of course, Tom Ford is a very good player but it’s really bizarre. Maguire won the Tour Championship in the summer but since then has been blowing hot and cold and more cold than hot actually.

Ding Junhui beat Lyu Haotian by 5-4, having trailed 4-1. During those last four frames, Ding had just one break over 50 but Lyu scored only 39 points in total. Now, I really rate Ding as a break builder, however he is not a player in the Selby mould, and he has been guilty of lacking fight when behind in the past. I did not see this match, so I can’t be certain, but again, I can only wonder how much of a psychological barieer there is for younger Chinese players to beat him.

All three rookies who reached the last 32, won their  match. Aaron Hill beat Matthew Stevens, Peter Devlin beat Joe O’Connor in a match that over-ran, and Pang Junxu beat Barry Hawkins. Now, whilst there was good coverage on Aaron Hill’s matches, fair coverage on Peter Devlin’s matches, there was nothing much about Pang at all. Pang is only 20, a rookie, he beat one of the hardest match players on the tour in Hawkins, with breaks of 76, 57, 52 and 88. He had beaten the dangerous Robbie Williams in the previous round. Why is there nothing about him in WST reports? I know that the language barrier is a factor, and the Chinese assistant media officer is stuck in Beijing and not traveling to the UK any time soon, but still?

Mark Allen had 4 succesive centuries the day before yesterday. He scored five 50+ breaks  – 101, 55, 73, 58, 88 – in his last 32 win over Ashley Carty. In the last 16, he was all square with Ding at the MSI, with a 104 and a 77, and then went missing completely, scoring just three points in the last three frames. Again, without seeing the match, it’s hard to make an informed opinion but, for some time now, Mark Allen seems to regularly run out of energy when reaching the latter stages of events and this was his second match on the day…

All detailed results are on snooker.org