The first day of a tournament nowadays usually produces many stories and yesterday at the 2020 English Open was no exception.

Once again there were Covid-19 positive tests (source WST)

Carrington came into contact with Sam Craigie on Sunday so both players have been withdrawn from the event.

Carrington was due to play Thepchaiya Un-Nooh in the first round on Tuesday, while Craigie was due to face Anthony McGill on Monday. Un-Nooh and McGill both receive a bye to the second round of the world ranking event.

All other players and officials tested at the event so far have had negative results.

Carrington and Craigie will now undergo a period of self isolation and will receive the support of WST.

There could be more possibly today.

Mark Williams has withdrawn from the Matchroom.Live English Open for personal reasons.

Williams had been due to face Allan Taylor in the first round on Tuesday in Milton Keynes, but Taylor will now receive a bye to the second round.

This is a bit puzzling. Mark had also withdrawn from the Championship League earlier this month, and he was beaten in the first round at the European Masters last month.

This is WST report on afternoon session:

Mark Selby’s intention to play at a faster pace paid dividends as he white-washed Fan Zhengyi 4-0 to start the defence of his Matchroom.Live English Open title in perfect fashion. 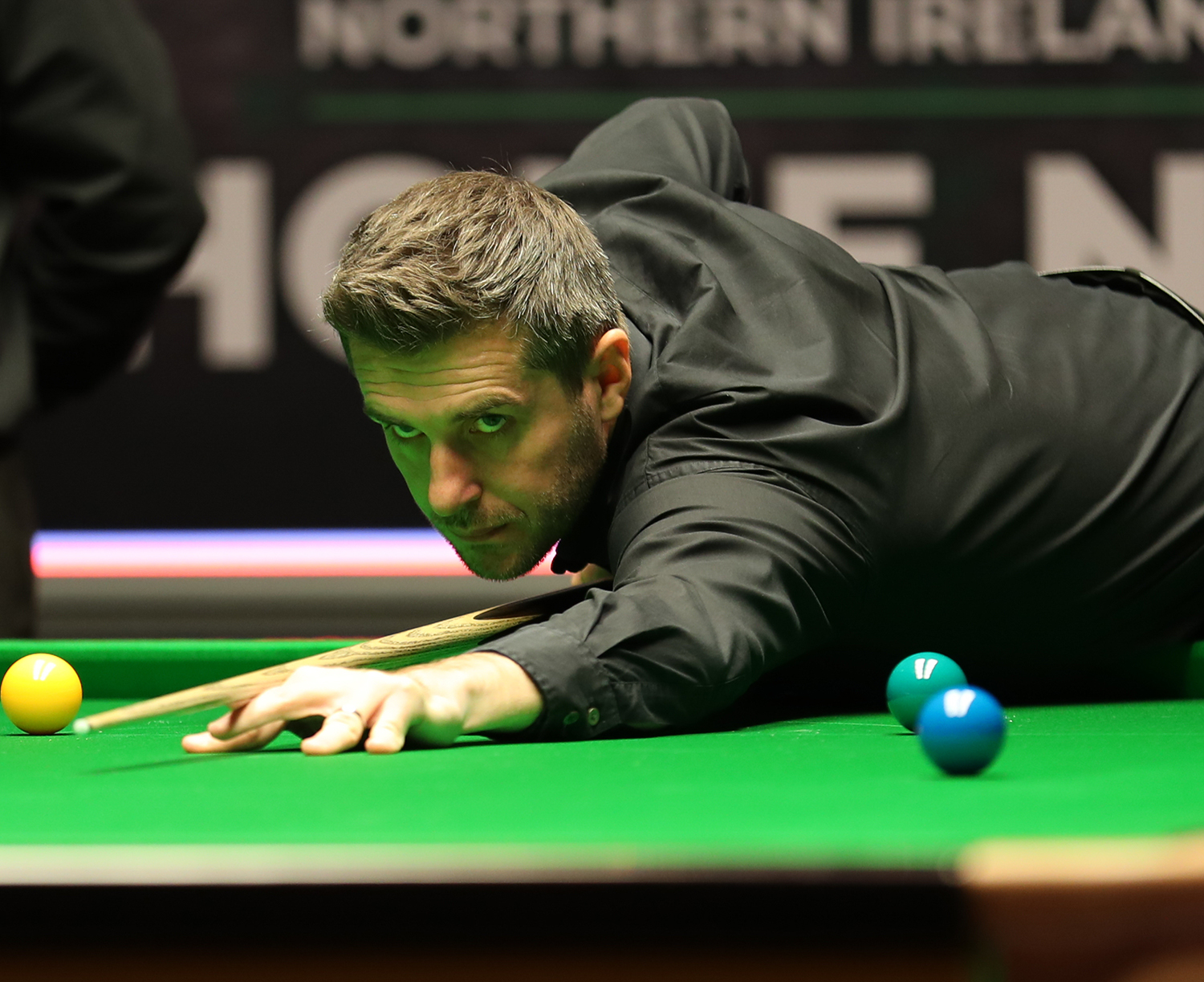 Selby already has one trophy in the cabinet this season having won the BetVictor European Masters last month, and is full of confidence as he aims to make it back-to-back titles. He meets Chang Bingyu or Aaron Hill in the last 64.

His coach Chris Henry has encouraged the world number four to play at a faster pace and trust his natural ability.

“If you play on instinct it gives you a better chance of playing well,” said Selby, who made a top break of 70 today and averaged 20.6 seconds a shot. “Otherwise you can over-think and that can lead to anxiety and muscle tension. I am trying to just see the shot and play it, rather than having a look around the table first and trying to work the break out. I have never done that in the past so it was alien to me at first, but I am getting used to it now.

“On the practice table I play with a nice rhythm, then in the past I was getting to tournaments and trying too hard, as if it was life or death. There are a lot worse things going on in the world than a game of snooker. So I’m just trying to bring that same rhythm and attitude that I have in practice out there on the match table.”

Selby beat David Gilbert 9-1 in the final of this event last year, ending a long title drought, and has since won two other ranking events. “On and off the table I feel more calm with myself,” added the 37-year-old from Leicester. “Before, I was getting frustrated and anxious out there, missing balls and getting nervous. Now I’m at ease with everything I’m doing. If I miss balls it’s easier to accept because I know how to correct it.”

Ding Junhui came from 3-0 down to beat Si Jiahui 4-3 in a Chinese derby. Si, sporting a blue haircut, had chances for victory but couldn’t take them as Ding fired breaks of 77, 50, 66 and 53 to win the last four frames.

Michael Holt top scored with 66 in a 4-1 defeat of Jimmy White while Joe Perry made the highest break so far, 139, in a 4-1 win over Riley Parsons.

WST should give something to charity for every terrible pun they come up with… great cause!

That said Mark Selby’s assessment of his work with Chris Henry is very interesting. Apparently the “torturer” was also torturing himself as well as his opponents  all those years when he inflicted so many “slow deaths”. I remember this right rant from Dotty after their semi-final at the 2013 Masters (excerpts)

“Missing the black has probably cost me the match,” said Dott. “If the black goes in, I go 5-1 ahead and wouldn’t lose. But after that, he just bored me to tears.

I felt that I was living in a nightmare. I don’t know what the stats were, but I’m guessing that even in the frame I won my highest break must have been about 12. I just couldn’t get in the balls. Either the red was safe, the black was safe, the pink was safe…I was finding it hard to stay interested.

“I’m not having a go at him. He is without a shadow of a doubt the best in the world at frames like that. I just find it hard to play them.”

“It could be a long day tomorrow,” said Dott. “I don’t think that is a good advert for snooker tonight. That is just my personal opinion. I don’t like being involved in games were lots of people are actually leaving.”It is not so much putting me off. You just don’t get rhythm. It is like killing the game. It is the equivalent of a football team putting 11 men behind the ball and not attempting to come out. It is just the way Mark plays.

He enjoys frames like that, but by the time it reached 5-5, I had no rhythm whatsoever. I mean none. Almost like I hadn’t potted a ball.

“I know Mark will say the balls went awkward, but he constructs the frames that way. And it was hard to get out of.

In one of the frames I thought I’d just smash the balls up. Even in the last frame, I went for a long red that I potted that I would probably never have went for because I didn’t want to get involved in a safety game.

It might sound like I am having a go at him, but I am not. He is the complete opposite of Judd Trump, but Mark is not there to entertain the crowd.”

And I remember only too well: I was there. Graeme questioned the possibility that Mark could really enjoy playing this way. He was rigth. And it left me walking back to my hotel, well past midnight, in a blizzard for about an hour, and catching a very bad cold.

So thank you Chris Henry! Everyone will be better for it!

Si  Jiahui should really have won that match. He had several occasions to do so. Ding looked good in the balls but all other aspects of his game need improvement.

The “feature” of the evening session was Ronnie’s match against Brian Ochoiski, and you can read “all” about it here.

Other than that WST “round-up” was quite short:

Ireland’s Aaron Hill, who knocked O’Sullivan out of the BetVictor European Masters, suffered a 4-2 reverse against China’s Chang Bingyu.

Crucible quarter-finalist Kurt Maflin edged out rookie Peter Devlin 4-3. Breaks of 100, 51 and 100 saw Maflin race into a 3-0 lead, before Devlin fought back to 3-3. Norway’s Maflin got the better of the decider to earn a place in the last 64.

Aaron Hill defeat should not come as a real surprise. After beating the World Champion last month, and the huge impact that this win had in Ireland, he now has to carry a lot more expectations and that can be difficult. Yesterday he was facing another young player, on an outside table and he was probably “expected” to come on top. Such situation can be difficult to manage for such a young player.

Maguire’s defeat is no surprise whatsoever. Since winning the 2020 Tour Championship last season, he’s not done much at all. So far this season he’s only won two matches of the six he played. Very strange. That said, Sunny Akani scored heavily: he had breaks of 57, 72, 71 and 59 in the last three frames of the match.

Not reported on by WST …

Scott Donaldson was beaten 4-1 by Andy Hicks in a match that, going by the frames’ scores, was extremely close, and featured no break over 50. That, for me, was more of a suprise than Maguire’s exit.

Yan Bingtao defeated Alan MacManus by 4-2. The surprising bit here is how it happened. Alan scored three of the four 50+ breaks of the match, Yan won on hard match play.

Oliver Lines beat Noppon Saengkham by 4-1, and the “returning Steven Hallworth” beat Martin Gould by the same score. Noppon is yet to find some form this season, Martin who had narrowly lost by 9-8 to Mark Selby in the Final of the European Masters only two weeks ago, won the first frame and was then outplayed for the rest of the match. Surprising.

Away from the limelights, and away fom the “live scores” because of scoreboard issues, Joe O’Connor and Soheil Vahedi produced a lot of drama. All frames were close. Joe lead 3-0, only for Soheil to come back at him and force a decider. In the sixth frame Joe had a 62 break, but lost by 65-63. The decider was resolved on the last pink. When Joe, on a break of 60, reached the last colours state, his opponent needed one snooker: the score was 60-30. However, Joe went in-off after potting the yellow. His reaction showed that he thought he had blown it. With the yellow back on the table, and benefitting from his opponent’s 4 points penalty, Soheil could win by one point, but he needed all seven remaining balls. He didn’t get ideal position on the pink and missed it. Joe potted the pink to win.