The last 64 round was played to a completion yesterday in Milton Keynes, and it produced a few surprises.

Let’s start with the WST reports:

Trump Out Of Jail Again

For the second time inside 24 hours, Judd Trump came from 3-1 down to win 4-3 and keep alive his hopes of winning the Matchroom.Live English Open.

Louis Heathcote couldn’t finish off the world number one on Tuesday night, and today it was China’s Yuan Sijun who let slip a two frame advantage. World number one Trump goes through to the last 32 to face Michael Holt or Lu Ning.

“Today was better from 3-1 down, I had to earn it,” said Trump. “I’m happy with the way I finished the game. It was nice to produce my best snooker under pressure. I always believe in myself. The form is there and hopefully it will click into gear tomorrow.”

World number five Mark Allen became the highest ranked player to be knocked out as he suffered a surprise 4-0 defeat against Robbie Williams, who is ranked 102 places lower. Breaks of 80, 70 and 61 helped Williams to a fine victory.

“All credit to Robbie, he played very well and froze me out for most of the match,” said Allen. “He potted some good long balls to get in. I didn’t make too many mistakes. I’ll just have to get back to practice because there are no secret recipes. Hopefully I won’t have too many days like today.” 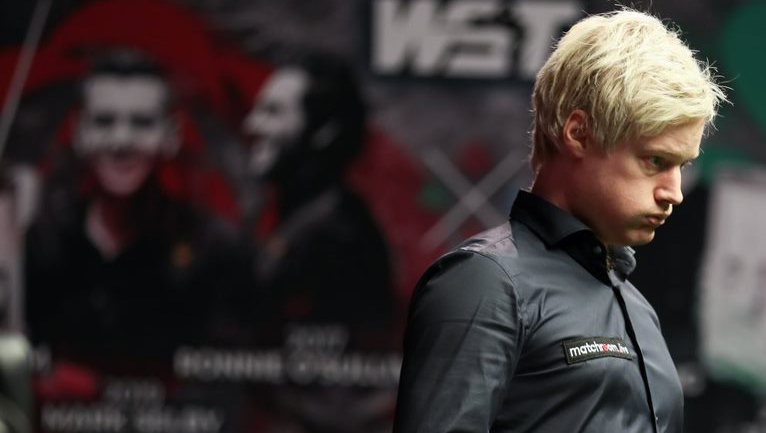 Zhou Yuelong was let off the hook by former butcher Farakh Ajaib in a dramatic match which came down to the last two balls. Zhou got the better of a 72-minute decider after a long safety battle on the pink.

Tour rookie Ben Hancorn impressed a 4-2 defeat of Thepchaiya Un-Nooh while Steven Hallworth scored his best career win so far with a 4-3 defeat of Yan Bingtao.

If you wonder why the decider between Zhou and Ajaib was so long, well, they spent a long time on the last two balls…

And this is what Mark Allen had to tell the Northern Irish Press after his defeat:

“To be honest I just got completely outplayed,” the 34-year-old said. “He was very, very good from the very start so it didn’t feel like I got much of a chance until the last frame.

“I was frozen out for three and a half frames and I didn’t make the most of it but all credit to Robbie, he played very, very well.

“He potted some good long ones to get in and I was a bit unfortunate with a couple of safety shots.

“I think something I’ve always stood up to over the years is the pressure of the big occasion.

“It’s quite hard to put yourself in that position when there’s no crowd but it’s always nice to have that whenever you need it on the big occasion.

“It’s not a lot of fun but that’s absolutely no reason why I lost today, I just lost because he played much better.”

World number 91 David Lilley scored a shock 4-3 victory over eighth seed Shaun Murphy. From 2-0 down, Lilley made breaks of 119 and 116 in getting back to 3-3, then got the better of a scrappy decider to register the best win of his career.

Defending champion Mark Selby was pushed all the way by China’s up-and-coming Chang Bingyu. Selby trailed 2-0 and 3-2 but made breaks of 74 and 125 in the last two frames to win 4-3.

John Higgins eased to a 4-0 win over amateur Connor Benzey with a top break of 97.

I wouldn’t say that David Lilley’s win over Shaun Murphy is a “shock”. To his own admission, Shaun came to this tournament without adequate preparation and David Lilley has an excellent record in the amateur game. He’s also a mature, experienced player.

Other than Mark Allen, Yan Bingtao and Shaun Murphy, there were other “top 16 casualties”.

Stuart Bingham lost by 4-2 to Ben Woollaston yesterday, despite scoring a 136, the highest break of the match, and his second 136 in the tournament.

Jack Lisowski was beaten 4-3 by Jak Jones. Jak Jones is a very methodical player: his AST yesterday was over 33 seconds, that probably doesn’t suit Jack Lisowski. There were three breaks over 50 in the match, all by Lisowski, but they won him only three frames.

Worth noting as well are wins by Gary Wilson over Ricky Walden (4-3). Kurt Maflin over Jordan Brown (4-0), Hossein Vafaei over Joe Perry (4-3) and Mark Davis over Zhao Xintong (4-3).

And, of course, Ronnie beat Ryan Day by 4-1 at the start of the evening.

Today is “moving day”. Two rounds will be played today. The current 32 men field will be reduced to just 8 by tonight.