Not many would have expected the final line-up we have today. Here is how we got there… 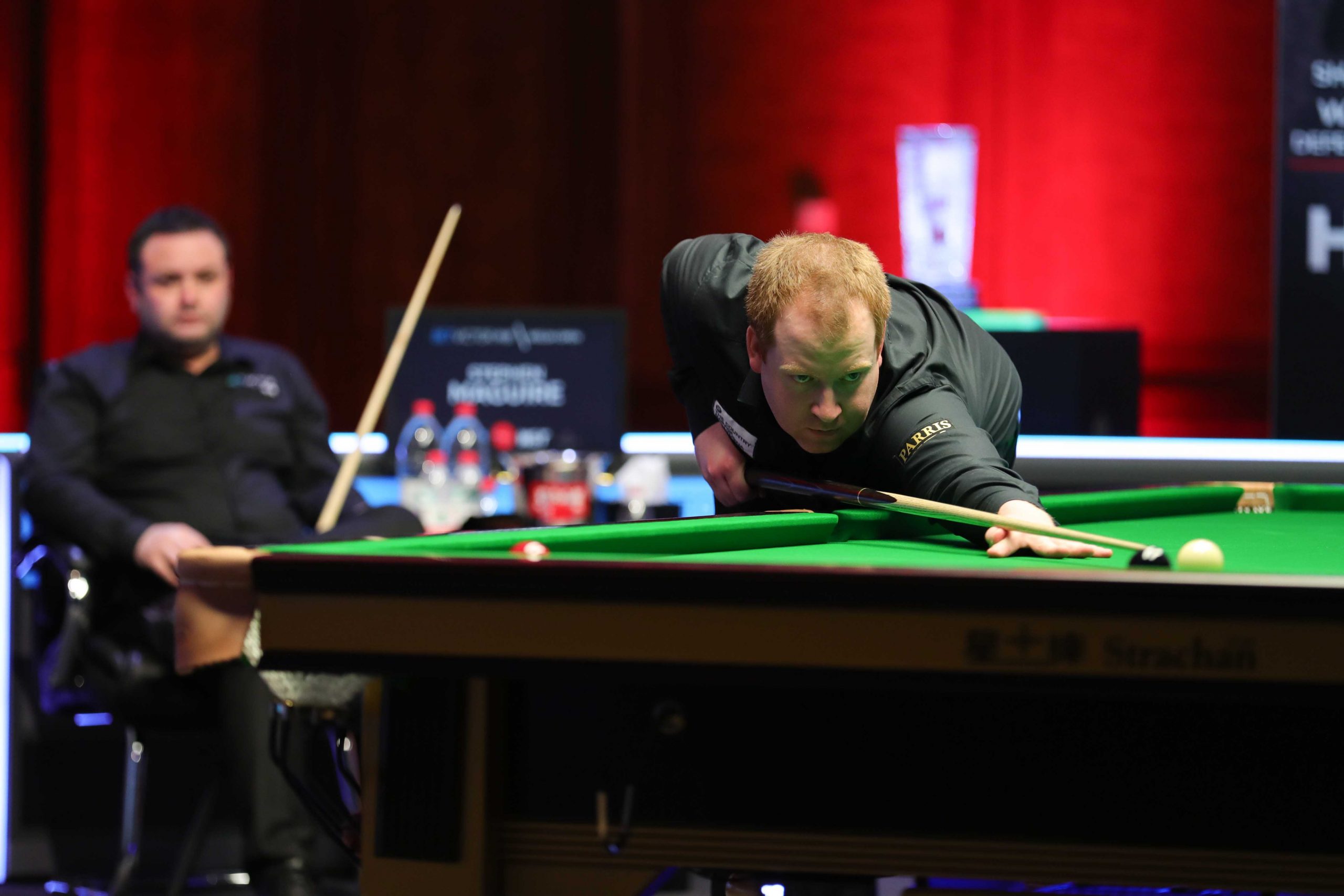 Three years ago Jordan Brown was working in a petrol station, now he’s scored the biggest win of his career to beat Stephen Maguire 6-1 and make his first ever ranking event final at the BetVictor Welsh Open.

The Northern Irishman, who first turned professional in 2009, began his current stint on the World Snooker Tour in 2018 by coming through Q School.

However, world number 81 Brown was flirting with relegation from the circuit at the end of last season. Only a run to qualify for his maiden Crucible appearance at the World Championship spared him a return to Q School.

Brown will now face either Ronnie O’Sullivan or Mark Williams over the best of 17 frames in tomorrow’s final, with a top prize of £70,000 and the Ray Reardon Trophy on the line.

Victory for Brown this afternoon also comes with the added bonus of a place at next week’s Cazoo Players Championship, by securing his position in the top 16 of the one-year money list. Defeat for Tour Champion Maguire, who himself only needed to win today to clinch a spot, ends his hopes of qualifying.

Brown is enjoying the best form of his career, having reached a maiden ranking quarter-final just last month at the BildBet German Masters.

The Antrim cueman got off to a flyer this afternoon, firing in a sublime run of 135 to take the opener. However, Maguire immediately responded by stealing the second frame on the black to level at 1-1.

From there 33-year-old Brown dominated the remainder of the tie. He composed breaks of 56, 113 and 59 on his way to five frames on the bounce to secure his place in the final.

Brown said: “Three years ago I was working in a petrol station and serving customers, getting up at 5:30 and 6:30 every morning. It is crazy to think of the journey that I have had. To be in a ranking tournament final is just incredible.

“It was very important to stamp my authority early. I showed Stevie that I was ready to play. The 135 break just settled me right down. I was pleased to carry it right through the whole match.

“I’ve been putting the hours in on the practice table. Maybe I was just going in to pot balls in the club before. It is more intense now and I am treating it more like a match occasion. That means something. It is easy to pot balls, but there is a lot more too it than that.

“It means everything to be in the Players Championship. All of the sacrifices and hard work have led me to this moment. It is very satisfying because I’ve always had the inner belief to compete with the top players. To be in the mix next week will be amazing.”

Jordan played extremely well yesterday. Asked who he would like to play, he answered “Ronnie”. There are several reasons behind this answer as he explained to Phil Haigh:

…
Brown is thrilled to be taking on the man he considers the greatest ever in the final, but he is also out with a point to prove to the world champion.

The Antrim Ferrari remembers O’Sullivan’s comments at the World Championship last year, when the 45-year-old said he would have to lose an arm and a leg to drop out of the world’s top 50.

O’Sullivan said at the Crucible: ‘People like me, John [Higgins] and Mark [Williams], you look at the younger players coming through, they’re not that good, really.

‘Most of them, they’d probably do well as half decent amateurs, not even amateurs, I mean, they’re so bad.

‘A lot of them you see now, you think, cor, I’ve probably got to lose an arm and a leg to fall out of the top 50. So that’s really why we’re still hovering around still, just how poor it is down that end.’

Brown has huge respect for his opponent on Sunday, but he will not pretend that O’Sullivan’s comments didn’t sting as he scraps away to rise into the top 50 in the rankings.

The 33-year-old has never been in the top 50 in his career so far, and he, like other players down the rankings, took the Rocket’s comments as a slight.

‘He’s definitely the greatest ever, no doubt about it,’ said Brown after his semi-final victory. ‘The way he plays, his style of play, the way he scores, everything about him.

‘Maybe the only downside are his comments off the table, slandering the lower-ranked players didn’t go down well with me.

‘Maybe that spurred me on as well because I don’t think his comments are entirely true. He doesn’t realise there are so many players aspiring to be like him, he is the benchmark, the game isn’t as easy as what he makes it look.

‘It just put a bit of fire in my belly to prove him wrong. The top 50 stuff, it was really annoying, I’m not going to lie. That drove me on as well because those comments stick in your mind.’

Presented with Brown’s comments, O’Sullivan claims they were only intended to motivate lower-ranked players, so was delighted to hear that they had produced the desired results.

‘That’s what the comments were about, motivating people,’ said Ronnie. ‘So it had the right effect on Jordan, which is great.

‘He’s gone away, seen the positives of it, come back, become a better player and that’s what a lot of the other players should be looking at doing.

‘They should take it as a positive and a motivation to be better, because I certainly would.

However, annoying Brown found O’Sullivan’s comments, he still has incredibly nice things to say about the six-time world champion and, before the second semi-final was played, declared that he’d rather play Ronnie than Mark Williams.

‘What can you say? He’s the ultimate, the greatest of all time, no doubt about that. He’s been entertaining us on our TV screens for the best part of 30 years and we’re just grateful to have him in the game and still entertaining the millions round the world.

‘Slight preference to Ronnie. Ronnie, in my opinion, is a slightly better player than Mark. If I play Ronnie it’s a fantastic, showpiece occasion for all my family and friends back home. It’s just a pity they can’t be here, but I’m in the final that’s all that matters.’

O’Sullivan is impressed that Brown fancied a crack at him in the final at Celtic Manor, although doesn’t think it is good news for his own chances.

‘It’s great, it’s not so great for me when you’re opponent says he’s really looking forward to playing you, you never want to hear them words,’ said the Rocket.

‘But he’s got a great temperament, just seems to play the balls. It’s a good attitude to have.’

O’Sullivan progresses to face world number 81 Jordan Brown tomorrow, who will be competing in a ranking final for the first time. They will meet over the best of 17 frames for the Ray Reardon Trophy and a top prize of £70,000.

The Rocket, who has won the Welsh Open on four occasions, is aiming for a record equalling fifth title tomorrow. That would see him draw level with Scotland’s John Higgins.

This evening’s encounter was the latest in a rivalry which extends back to 1992, when both players turned professional. The pair boast 59 ranking titles between them, with six-time Crucible king O’Sullivan having won 37 to Williams’ 22. O’Sullivan also holds a considerable advantage in the head-to-head, now leading 32-8.

Williams bows out with the consolation of a place in next week’s Cazoo Players Championship, which he secured by winning yesterday evening’s quarter-final with Tom Ford.

It was the Welshman that got off to the strongest start tonight. He composed a fine run of 73 to take the opener. O’Sullivan hit back immediately with a break of 103 to restore parity at 1-1.

Further breaks of 77 and 54 helped him to a 3-1 lead at the mid-session interval. When they returned the pair battled out a tactical 21-minute fifth frame, with an error from Williams eventually allowing O’Sullivan to make 37 and move 4-1 ahead.

O’Sullivan then claimed the sixth, before a break of 69 saw him wrap up the comfortable 6-1 victory.

“If you know you are going to get punched in the face, you know you have to have a better defence. He was capable of doing that, as I knew he was playing well and scoring well. I had to be on my guard. I played pretty solidly,” said 45-year-old O’Sullivan.

“It would be nice to win any tournament. The memories I had with Ray Reardon are far more important than any trophy, but it would be nice to pick the trophy up and say hi to Ray. I’m sure he will be watching at home.

“Jordan is a really good player. He has a good temperament and is a good match player. He’s done well against a lot of very good opponents. I’ve watched his matches in the past and he gave Selby a good game, that is always very difficult. I’m impressed with how he plays.”

Mark William’s feedback on the match was rather brutal:

As usual a few images and short videos were shared on twitter bu ES, BBC Wales and WST:

As a result of yesterday’s matches outcome the full line-up for the 2021 Players Championship is now confirmed:

Jordan Brown’s semi-final victory over Stephen Maguire at the BetVictor Welsh Open has given him a place in the top 16 of the one-year ranking list and a spot in next week’s Cazoo Players Championship.

Brown will be in the hunt for the £125,000 top prize at the Cazoo Players Championship which runs from February 22 to 28 in Milton Keynes.

The 16 players listed below will be in the field. However, the seeding is not confirmed yet as it will depend on the remaining results this weekend at the BetVictor Welsh Open. The full draw and format will then be released.

Trump will face Bingham on Monday at 7pm while three other players have been scheduled into the following sessions:

Should Ronnie win today, he would play Jordan Brown again in the first round on Tuesday. If Jordan wins, he will climb to 7th in that list, and would then play John Higgins, whilst Ronnie would face Ding.

It will be a difficult match for both today.

For Jordan, it’s his first ever final. It’s also a two session match which can be important psychologically, with plenty of time between sessions to reflect on what happened in the first session and what could happen in the second. He’s not been there often before and although he has played two session matches to qualify for the Crucible, this is different.

Ronnie has been there many times, but has lost the last wo finals he played in. He’s up against the number 81 in the rankings. He will certainly know how good Jordan is, but he will be the one expected to win and that brings its own pressure. He’s a bit on a hiding to nothing out there.