The first round concluded yesterday afternoon, and the four first matches of the second round were played in the evening.

Here is the report by WST, its main focus on Stephen Hendry’s second roud match. 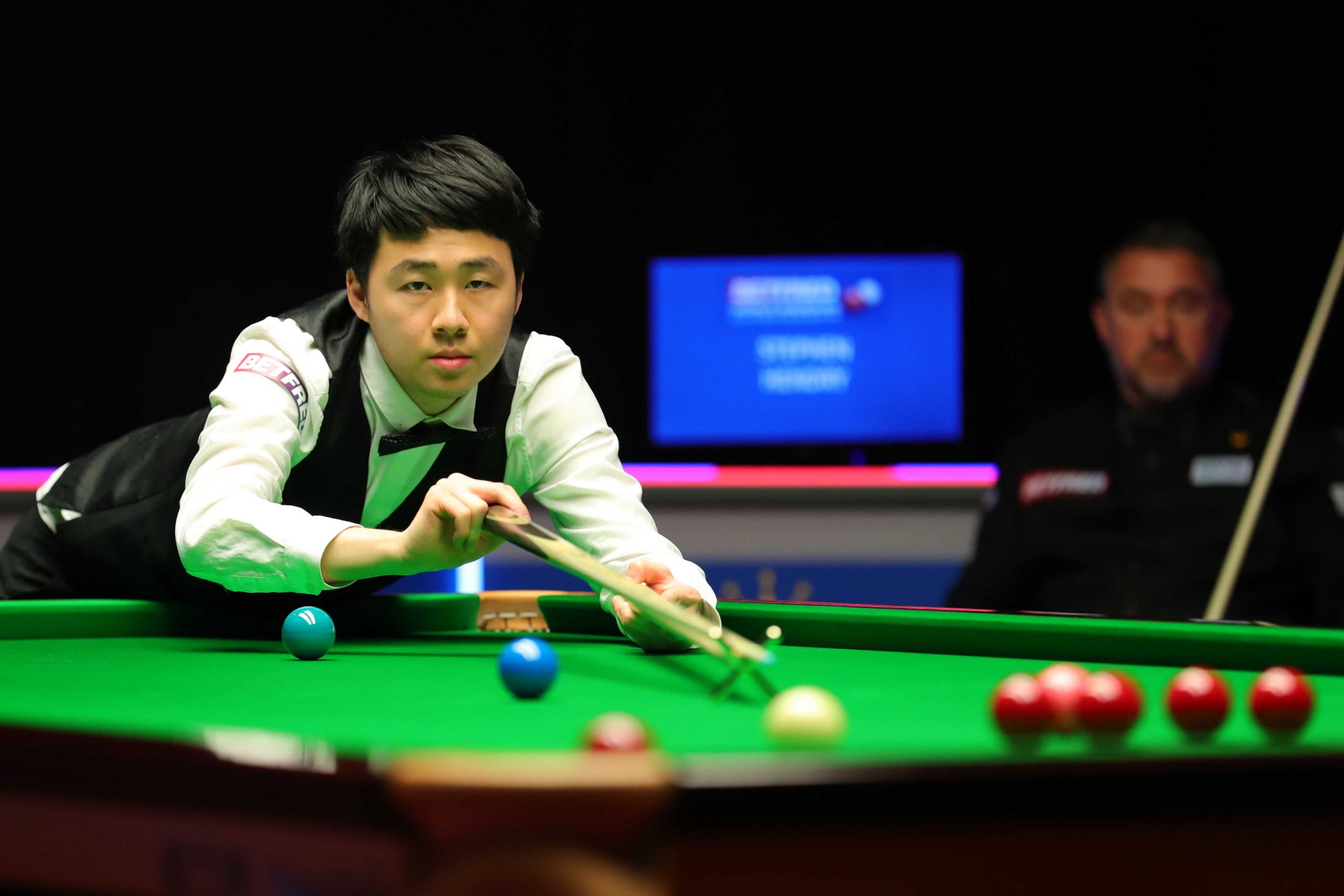 This week’s event is just 52-year-old Hendry’s second tournament back since returning to the professional circuit after nine years away from the sport. The 36-time ranking event winner had stepped away from professional snooker after the 2012 World Championship, but was offered a two-year invitational tour card at the start of this season and elected to take it up.

Hendry secured the first match win of his return against old rival Jimmy White in the opening round on Monday, scoring a 6-3 victory in the highly anticipated encounter. However, he ran into a ruthless opponent in Xu today.

The Chinese 23-year-old pounced on any of Hendry’s mistakes this evening. After trailing 1-0, he critically produced a clearance of 35 to steal the second frame on the black and immediately restore parity.

From there Xu fired in breaks of 75, 79, 51, 66 and 72 to make it six frames on the bounce and book a third round clash with compatriot Zhou Yuelong. This evening’s victory acts as a boost to Xu’s tour survival hopes.

After the match Hendry was typically honest in assessing his performance. However, he vowed to play on and enter more events next season.

Hendry said: “I had two or three chances to go 2-0 up and from then on I didn’t offer any resistance to my opponent. He capitalised on all of my mistakes. It doesn’t matter how low a player is ranked, if you make it easy for them, they will still pot balls and win the frames.

“Hopefully with a few more competitive matches under my belt, before we come to this point next year, I’ll be able to have a bit more composure out there. Every shot seemed like a test. I was wondering if I was going to pot certain shots, that isn’t the way to think out there. You have to get on with it.

“I’ll certainly play in more events next year. If I am still not able to bring my cue action into a match situation then there is no point. The whole point is to see if I can play my natural game out there. We will give it a go next year and see what happens.”

Mertens battled to establish a commanding 5-1 lead and had several chances to get over the line. However, an impressive fightback from Lei saw him earn a crucial 6-5 win. The result keeps Lei’s hopes of tour survival alive.

McGuigan showcased his talent to move 5-2 ahead. However, Mann showed his experience and reeled him in to score the win in a decider.

Germany’s Lukas Kleckers booked his place in the second round with a 6-1 demolition of Peter Devlin. He top scored with a break of 134 and will face an intriguing second round clash with Swiss number one Alexander Ursenbacher.

Kleckers wasn’t the only German to progress, with compatriot Simon Lichtenberg producing a fine display to Russia’s Ivan Kakovskii 6-3. Lichtenberg composed breaks of 58, 93,73 and 82 on his way to victory and will play Ian Burns in round two.

Both Lichtenberg and Kleckers are bidding to make history this week and become the first German to reach the Crucible.

Lukas Kleckers played really well in beating Peter Devlin. It was a solid performance rather than a ” brilliant” one although he scored a magnificent 134. As a mainland European I’m always pleased to see players from this area doing well, especially young players. Peter Devlin had a bad day in office. It happens to everyone. For most of us, it’s no big deal, but for sportspersons it can be very difficult as they are under scrutiny from the general public. Yesterday, Peter was insulted and treathened on social media.

This is a disgrace, and it’s almost certainly coming from people who gambled and lost. Once again, I will repeat what I think about the whole gambling industry: it’s a plague and should be heavily regulated with no kind of advertising in any form allowed. Look around people. Look at how many of the bookies shops thrive and use your brain. The bookies earn much more than they lose otherwise they would not be in business. That in turn means that punters lose much more than they win. It’s that simple. If you gamble and lose, you have only yourself to blame unless there is foul play which was certainly not the case here. If you believe that you can beat the system on the long term, you’re very naïve.

Lei Peifan beat Ben Mertens from 5-1 down. Lei never gave up and applied himself. Ben’s game disintegrated with the mounting pressure. Ben is only 16, Lei only 17. Lei though has the experience of two years as a professional. He showed great maturity, and mental strength. Chen Zifan is currently 8th in the “one year redeem list” with 19000 points. There is a group of 6 players on 17500 points. They are the “chasing pack” and Lei is now part of this group.

One player who is also in this group is David Lilley, who got 5000 points thanks to Amine Amiri’s withdrawal. From what I heard from a source I trust, Morrocco closed its customs two weeks before the start of the championship. Amine did everything in his power to travel to the UK but it proved impossible. I’m pretty sure that WPBSA was aware of the situation as Jason Ferguson has devoted a lot of energy this season to help players who had problems traveling. I don’t really understand why, under those circumstances, they did not foresee the situation and secure a reserve player instead of giving Lilley a bye.

Xu Si also was under huge pressure yesterday and he produced a very solid performance from frame 2 on.

Stephen Hendry’s assessment was very honest. The main “issue” is his lack of confidence. I had heard him make similar admissions after defeats in the Seniors tour. In his bio, he speaks at length about the “yips”. For me, all this started when he lost the 1997 final to Ken Doherty, a match he lost by 18-12 – not a close score – despite making 5 centuries whilst Ken’s highest break was only 85. Stephen was only 28. At that point in his career, he had won 17 majors, after that he only won one more, the 1999 World Championship. There is no way in my views that he was “past it”, nor “burnt out”. I’m firmly convinced the Stephen’s game is a confidence game, and that confidence got a very damaging blow in the 1997 final. Ken had found the answer to Stephen’s game. He had dictated the style of the match, a style that didn’t suit Stephen who had no appropriate answer to it.

Xu Si is now, very provisionally, on top of the “8 players one year redeem list”.  One player who could overcome him is Chris Wakelin who will play Lei Peifan. However a win for Chris is likely to put him back in the top 64, therefore out of the “redeem list” altogether.