Three matches concluded yesterday. Here are the reports by WST

Last year’s beaten semi-finalist Anthony McGill pulled away from 4-4 to beat Ricky Walden 10-5 in the first round of the Betfred World Championship, setting up a match with Crucible king Ronnie O’Sullivan.

McGill seems to thrive on the Sheffield atmosphere and has a fine record at the venue, having reached the quarter-finals on his debut in 2015, and the semis last year, where he was narrowly beaten 17-16 by Kyren Wilson. After a quiet season, in which he has not gone beyond the last 16 of a ranking event, the Scot hopes for a strong finish on the big stage. 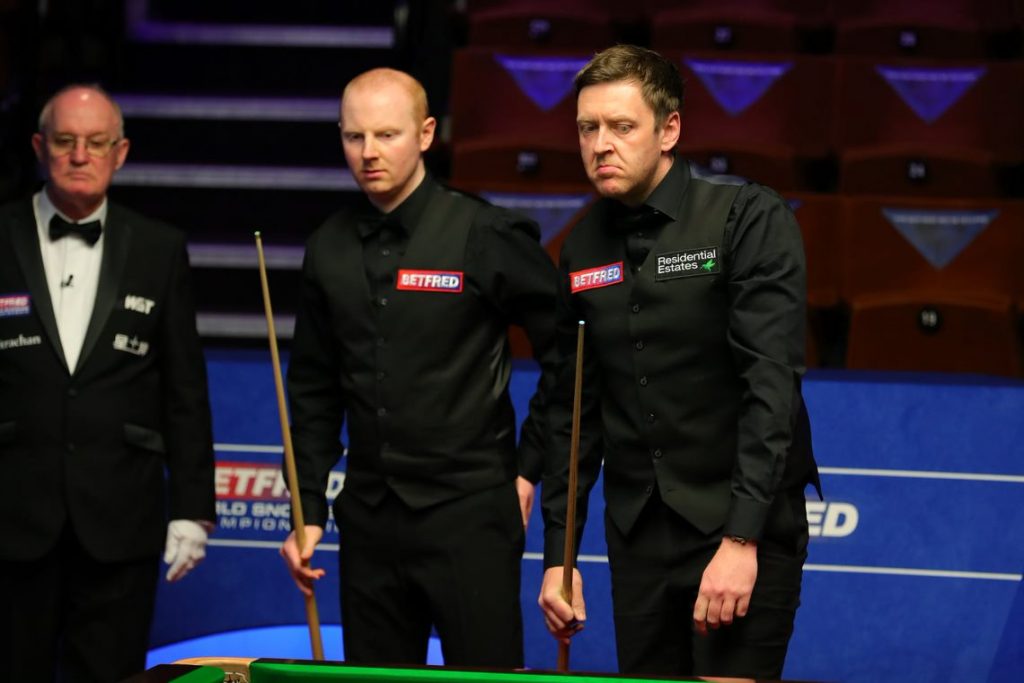 He will face O’Sullivan on Thursday and Friday, in their first meeting at the Crucible. McGill has lost all six of their previous matches, but has the all-round game and temperament to give his illustrious opponent a real test.

World number 16 McGill had a slender 5-4 lead after the first session against Walden then pulled away tonight with breaks of 83 and 130 to go 7-4 ahead. Walden pulled one back with a 98, but McGill took the next two with a top run of 69 for 9-5.

In frame 15, Walden had a chance to clear from 59-0 down, but ran out of position on the last red. McGill eventually potted green and brown to seal victory.

“I feel really good about myself when I play good snooker, and I did that today,” said McGill. “It might be the best I have played here. I have not been getting results this season, though my performances have been better than my results. That’s the way it goes sometimes, then you just have to stick with it and be patient and hopefully it will turn. That was a cracking win because Ricky is quality, I rate him so highly. To beat him 10-5, I’m delighted.

“I love it here, I grew up watching it. Even now at 30 years old, I’m a grown up man, but there is part of me that still feels like a kid out there. It’s the best place ever. There are not that many players who get the chance to play here.

“Each World Championship from now on, my sights will be set on at least making the one-table set up now that I have done it before. Playing Ronnie at the Crucible, how could you not be excited about that? I’ll try my best.”

This is not the result I wanted. I like Ricky – who I got to know personally – and I don’t like Anthony. There is little if any rational reason for the latter, I’m aware of that. Anthony runs an “academy” in in Scotland, where he welcomes children with learning disabilities. He certainly deserves high praise for that. I disagree with his vegan views although I’m also convinced that most people eat far too much meat, and that certainly is neither an explanation nor justification for the dislike I feel, but I still feel it. So, yesterday, whilst I could only admire Anthony’s skills at the table, I also hated every minute of that second session. I do hope that Ronnie can find his game in the coming round.

Kyren Wilson’s composure at the table proved vital as he recovered a 5-1 deficit to beat Gary Wilson 10-8 in the first round of the Betfred World Championship.

Last year’s Crucible runner-up Kyren looked in danger of a shock early exit when he trailed his namesake by four frames in the early stages. “At 5-1 it was looking grim,” he admitted. “My years of experience got me through. In the past I would have panicked. I know how important momentum can be, and once I had it I held on to it.”

The world number six from Kettering goes through to a last 16 clash with Barry Hawkins or Matthew Selt and will look to extend his impressive recent record at the Crucible, having won 14 matches at the Sheffield venue over the past five years.

Wilson has shown a high level of consistency this season, reaching at least the quarter-finals of eight rankings events, and winning the Championship League title twice. No player is more determined than the 29-year-old as he pursues his biggest ambition of lifting snooker’s most famous trophy.

Trailing 5-4 after the first session, Kyren won the first three frames tonight with top breaks of 61 and 60 to lead 7-5. Gary made 71 and 54 as he recovered to 7-7, only for Kyren to respond with 58 and 119 for 9-7. Gary pulled one back with a 56 but Kyren was unflustered and finished in style with a run of 73. Over the match he made three centuries and six more breaks over 50.

“In the early stages I felt a bit loose,” said four-time ranking event winner Wilson. “The tables are very fast so I had to get more compact with my action and control the cue ball better. I scored like a demon from 5-1 down. It was nice to have a crowd, especially when the partition went up. The fans add the feeling of butterflies in your stomach.

“I have adapted to the conditions now and I can look forward to round two. I learned a lot from my run to the final last year and how to look after my body to avoid burning out. The hotel I am staying in has prepared a meal plan for me to make sure I get enough protein. I am eating well and trying to make sure I practise at the right times.”

This was a really good match. Gary Wilson played well, really well, and it wasn’t enough. Kyren Wilson was scary in the second session. He played some incredible snooker.

Higgins Rallies To Down Tian 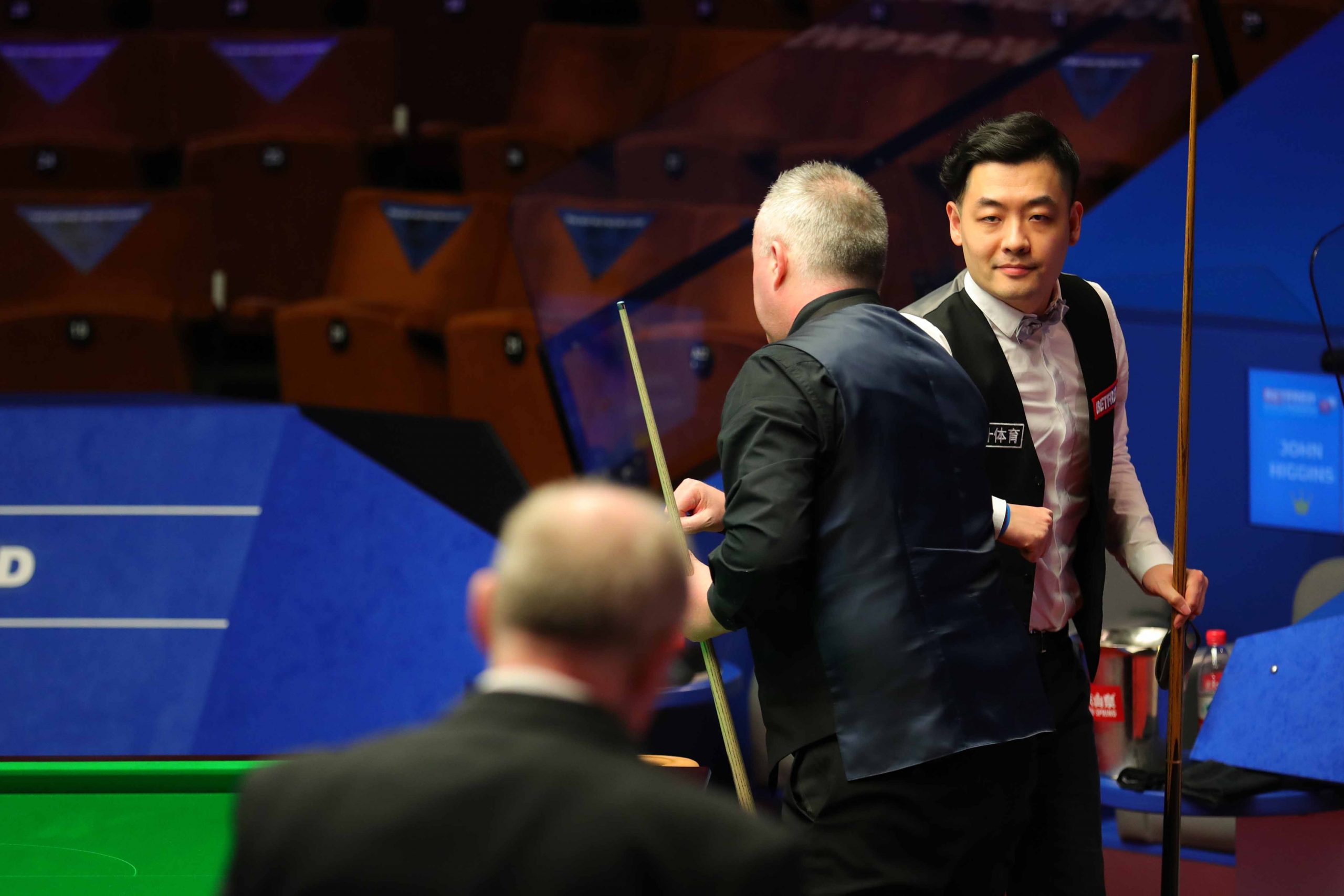 John Higgins said he was “struggling to breathe” due to the pressure during his first round clash with Tian Pengfei, but ultimately rallied from 7-4 down to win 10-7 at the Betfred World Championship.

The Scot admitted that despite being a four-time winner at the Theatre of Dreams, he isn’t immune to feeling the heat inside Sheffield’s Crucible.

Higgins came into this week having shown signs of his best form this season. The 31-time ranking event winner was runner-up to Yan Bingtao at the Betfred Masters and produced scintillating snooker to win the Cazoo Players Championship, beating Ronnie O’Sullivan in the final.

However, that form didn’t translate into his first round showing here. An edgy opening session was pulled off early with China’s Tian leading 4-3.

When they returned this afternoon it was Tian who continued to set the pace. The 33-year-old made breaks of 55, 61 and 57 on his way to opening up a 7-4 advantage.

Higgins began his fightback by securing a 32-minute 12th frame to gain a foothold in the tie. A break of 61 helped him to pull within one, before he restored parity and made it 7-7.

A colours clearance of 27 saw Higgins dramatically claim the 15th frame on the black to lead 8-7 and he compounded Tian’s misery with a break of 127 to move to the verge of victory at 9-7. At that point the players were pulled off to allow the evening session to get underway.

Higgins made light work of finishing off the win when play got back underway, firing in a sublime run of 135 to earn a second round clash with either Mark Williams or Sam Craigie.

“That was a whole range of what I’ve been through over 27 years here. Some good, some bad, some embarrassing. I’m delighted to get through, I dodged a big bullet there,” said 45-year-old Higgins. “The first round is always the most pressurised game each year. That is what I always feel. When you get that out of the way, you can relax into the tournament.

“I was actually struggling to breathe at one point. I don’t know what happened, that’s just what this theatre does to you. I think I stopped breathing for a few frames, but it was good to get through.

“When you are struggling mentally it is tough. I’ll take the positives. I finished it off pretty decently with a couple of 100 breaks. I’ll try to grasp on to that and get a couple of days practising in.”

This is a match that Tian should never have lost. John Higgins was there for the taking for most of it. He was terrible at times. Most of the first session was no better than “club level” snooker. But Tian struggled to finish frames, and lost many where he had been well in front. Inevitably, John Higgins found some fluency eventually, and finished strongly.