Three more matches concluded yesterday with Jack Lisowski, Mark Allen and Stuart Bingham going through. Ding became only the second seed to lose in the first round.

Jack Lisowski played one of the best shots of the tournament so far at a crucial moment as he beat Ali Carter 10-9 in a superb match in the opening round of the Betfred World Championship.

In the first match of the event so far to go to a 19th frame, Lisowski potted a fabulous long red early in the decider, judging position perfectly to finish on the black. That set him up for a break of 60 which proved enough to set up a fascinating second round clash with Neil Robertson.

It was a fitting conclusion to a high quality match, though Carter was annoyed to have missed important chances from 8-6 ahead.

Surprisingly it is only the second match Lisowski has won at the Crucible – he reached the second round in 2018 then lost in the first round to Carter in 2019 and suffered a cruel 10-9 defeat against Anthony McGill last year. Today’s victory is a huge boost to the 29-year-old’s self-belief.

Carter trailed 5-4 overnight but won the first two frames today to take the lead. Lisowski made it 6-6 and would have taken frame 13 if he had potted the final brown to a baulk corner, but missed a tricky pot and Carter punished him.

After the interval, Carter’s run of 72 put him 8-6 up, and he was on course to win frame 15 until he missed a red to a centre pocket on 52. Lisowski’s excellent 77 clearance turned the tide.

Another miss to centre, this time on the blue on 28, proved costly again for Carter in the 16th as Lisowski made 52 for 8-8. Frame 17 came down to a safety battle on the last red, and Carter, leading 56-30, executed a clever cross-double to a baulk corner which set him up to edge back in front at 9-8.  Lisowski hit back with a run of 82 to set up the decider.

First chance went to Carter but he potted just one red before missing an awkward blue. Lisowski’s tremendous red gave him his opportunity and his run of 60 put him in control. Carter had one half-chance to counter but scored just 7 before failing on a tough pink, and the elbow-bump soon followed.

“Ali was the one player out of the 16 qualifiers I didn’t want to face,” admitted world number 14 Lisowski. “When the draw came out I knew it would be tough. But you have to beat the best players to have a chance. We both missed a few balls. To win 10-9 after losing 10-9 last year is a big relief. I held myself together well from 8-6 and 9-8 down. It’s a game I would have lost a few years ago.

“I was losing it, my concentration was going a few times. But overall I’m more composed, my game is getting better, my safety is better. It wasn’t a great performance but I did what I had to do to win. I’ve been to three finals this season so I am doing something right in terms of consistency. I want to do better than the second round here and build my way into it

“Neil is playing as well as anyone, I will have to be on top of my game to have a chance.”

Carter said: “The turning point was the red I missed at 8-6, it lipped out of the middle pocket. Then early in the last frame I missed the blue but I was closer to the side cushion than I wanted to be. I have had a good second half of the season and I’m heading in the right direction.” 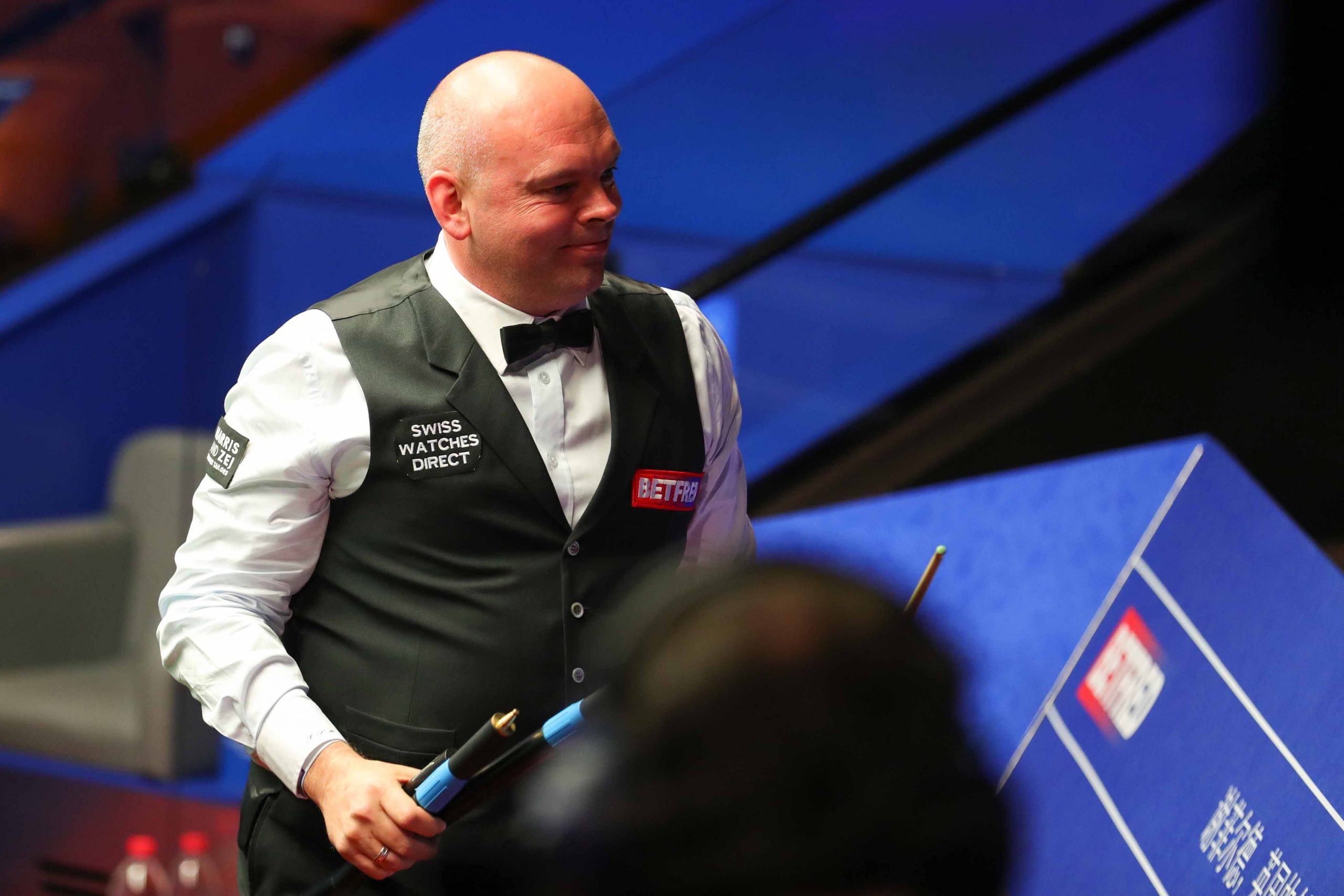 Stuart Bingham summoned a crucial break of 70 in the final frame to edge out Asian number one Ding Junhui 10-9 at the Betfred World Championship.

The pair played out a keenly contested afternoon session, which saw Ding peg 2015 World Champion Bingham back to 9-9 after trailing 9-8. It was at that point that they were pulled off to allow the evening session to get underway.

When play resumed it was Ding who had looked set to seal a huge victory. However, the 14-time ranking event winner broke down on a run of 45 after missing a cut back red. That allowed Essex cueman Bingham back to the table and he pounced with that break of 70 to cross the line and book a second round encounter with Jamie Jones.

Defeat for Ding sees his quest to become Asia’s first World Champion pushed back at least another year. The 34-year-old reached the final in 2016, but lost out to Mark Selby.

Bingham arrived at the Crucible battle hardened following last week’s qualifying event, where he beat Luca Brecel in the final round. That was the first time Bingham has required the qualifiers since 2011. He dropped out of the world’s top 16 this term after a difficult season, which has only seen him reach one ranking quarter-final.

“I’m over the moon to get through that game, it was a classic match. I was gutted to get pulled off at 9-9, but it probably did us both a favour to chill out for a few hours. The first eight or nine minutes of that deciding frame had some unbelievable safety. We weren’t giving each other a chance,” said 44-year-old Bingham. “Luckily for me, he missed after he got in and I produced one of my best 70 breaks and one of the best at the Crucible Theatre.

“It’s going to be tough against Jamie Jones. It’s his first season back on and he is probably playing the best snooker of his life. After what he went through and coming through Q School straight away, at the end of the year he is in the last 16 of the World Championship. He is going to be one hell of a tough player.”

This was an excellent match and it’s a shame that one of them had to go out of the tournament. It’s clear that in many ways Bingham is a “false qualifier” if that makes sense. He clearly is a top 16 level player. For Ding it’s another disappointing World Championship campaign.

Mark Allen won a match at the Crucible for the first time in three years, and did so in emphatic style as he fired three centuries in a 10-2 victory over Lyu Haotian at the Betfred World Championship.

Northern Ireland’s Allen lost to Zhou Yuelong in the first round in 2019 and to Jamie Clarke in 2020. He avoided a hat-trick of first round upsets with a comfortable win over China’s Lyu but will surely face a far tougher test when he faces Mark Selby or Kurt Maflin in the second round. Allen is looking to improve his Sheffield record as he has reached the semi-finals just once – back in 2009 when he lost to John Higgins.

The Pistol needed just 55 minutes in the second session tonight to end the challenge of Lyu. He did most of the damage in the first session as he surged 7-2 ahead, making breaks of 139, 102 and 116. And he added the three frames he needed with a top run of 64.

It has been a mixed season for 35-year-old Allen so far – he won one of the biggest titles of his career so far at the invitational Champion of Champions in November. But in ranking events he has rarely produced his best, and currently lies 28th on the one-year list.

“It was a steady performance all day, I didn’t miss much in the first session,” said the world number 13 from Antrim. “It was a bit scrappier tonight but I was just happy to win. It’s good to conserve some energy, because when you win 10-7 or 10-8 they are gruelling matches. I can have an early night now, a few days off and plenty of practice.

“I have had no form since the Champion of Champions. It has been a very poor season. I lost early in the UK Championship and the Masters and haven’t gone deep in any ranking events. I have been working hard on the practice table, working on the right things and it hasn’t clicked so far, so hopefully it can click here. I love playing here, it’s great to have fans and the crowd will grow through the event.”

Allen was also asked about Barry Hearn, who has stepped aside as WST Chairman. “Barry will be sadly missed because he has transformed snooker,” said Allen. “Before he took over it was dark times, with six or seven tournaments a year, now we’ll have 25 once we get back to normal. He has added a lot of big events to the calendar. He is a workaholic and I’m sure he won’t stop working behind the scenes.”

I saw very little of this match. Right from the start it was clear how it was going to unfold and I didn’t fancy watching it after the first couple of frames. As for Allen, his problem in such a long demanding tournament is neither about ability, nor form, it’s about stamina and, unless he sorts himself out and gets fitter, he will always struggle to win it.