Three last 16 rounds matches were played to a conclusion yesterday.

Those are the reports by WST.

Neil Robertson described the strength of the remaining field at the Betfred World Championship as “scary” but bolstered his status as one of the favourites for the title as he beat Jack Lisowski 13-9 to book a place in the last eight.

By his own high standards, Robertson has a disappointing record at the Crucible since he won the title in 2010; he hasn’t reached the semi-finals since 2014. With a refreshed attitude towards the marathon of the mind, and a determination to remain focussed in every session and play his own brand of snooker, this could be his best chance for more than a decade.

Robertson arrived in Sheffield with the UK Championship and Cazoo Tour Championship already under his belt this season and looks on top of his game, having made seven centuries and 13 more breaks over 50 in the tournament so far. He will face Kyren Wilson or Barry Hawkins in the quarter-finals on Tuesday and Wednesday,  and a potential semi-final blockbuster with Judd Trump could be looming on the horizon.

“My next match will be tough and I wouldn’t expect anything else here,” said the Thunder From Down Under. “Long gone are the days when a random player could reach the quarter-finals. With 14 of the 16 seeds getting through, the second round draw was scary. I will just prepare myself well and play my game.”

Leading 9-7 overnight, Robertson extended his advantage this morning with breaks of 126 and 87 to go 11-7 ahead. Frame 19 came down to the last red and Robertson accidentally went in-off attempting safety, handing his opponent the chance to clear the table and close the gap.

World number three Robertson enjoyed a huge slice of good fortune when he trailed 40-8 in frame 20 as he fluked a red while playing safe, which set him up for a break of 70 to make it 12-8 at the interval.

Lisowski pulled one back with a 71, but Robertson made a break of 90 in frame 22 to secure his sixth win over Lisowski in as many meetings.

“When you are playing Jack, you need to be ready at the start line because he can get away from you quickly,” added Robertson. “He is so talented and exciting. I matched him in terms of scoring, I was fluent among the balls. It was a terrific match and I hope everyone at home enjoyed it.

“The Tour Championship was the perfect build up for me because it’s long matches against the same players I could face here. Everyone loves to see a long match like Ronnie O’Sullivan and Anthony McGill last night which went 12-12, there is nothing more exciting.

“It’s great to have a crowd back here and to hear the genuine applause instead of the clapping machine! Today it was a different level to the atmosphere we had yesterday and hopefully that will keep building round by round.”

Wilson Sees Off The Hawk

Both players are accustomed to success at the Crucible and they now boast 12 quarter-final appearances at the event between them. Hawkins had already appeared in the last eight on six occasions, while Wilson progresses to face the in form Neil Robertson in what will be his sixth consecutive World Championship quarter-final appearance.

They summoned a scintillating standard of play throughout this second round tie. Across the 23 frames that were played, there were 22 breaks over 50, including four century contributions.

It was Wilson who held a 9-7 lead at the start of play this afternoon. However, Hawkins had the momentum after rallying to close the gap to just two frames from 9-4 down.

Breaks of 107 and 53 in the opening two frames this afternoon saw the Hawk complete the fightback and level the tie at 9-9. However, Wilson responded to take the following two frames and head into the mid-session 11-9 in front.

Hawkins pulled back within a frame, before Wilson ruthlessly closed out the win with breaks of 90 and 102 to round off his 13-10 victory.

Wilson said: “I was really pleased with the way I handled it. I never got on top of myself at any moment. I give myself a kick up the backside every now and then, but I kept in check and made sure I stayed positive.

“Anything below my best in the quarter-finals against Neil Robertson and I am going home. That only gives me one thing to think about in my mind. I have to play good snooker. Sometimes it is quite nice to have that main focus. Neil has been tipped to win the tournament and is a heavy favourite. I feel like that is a win win situation there.

“I’ve been scoring very heavily this season. Neil has always scored very heavily. I hope it is that case again in the quarter-finals and the fans enjoy watching some great snooker.” 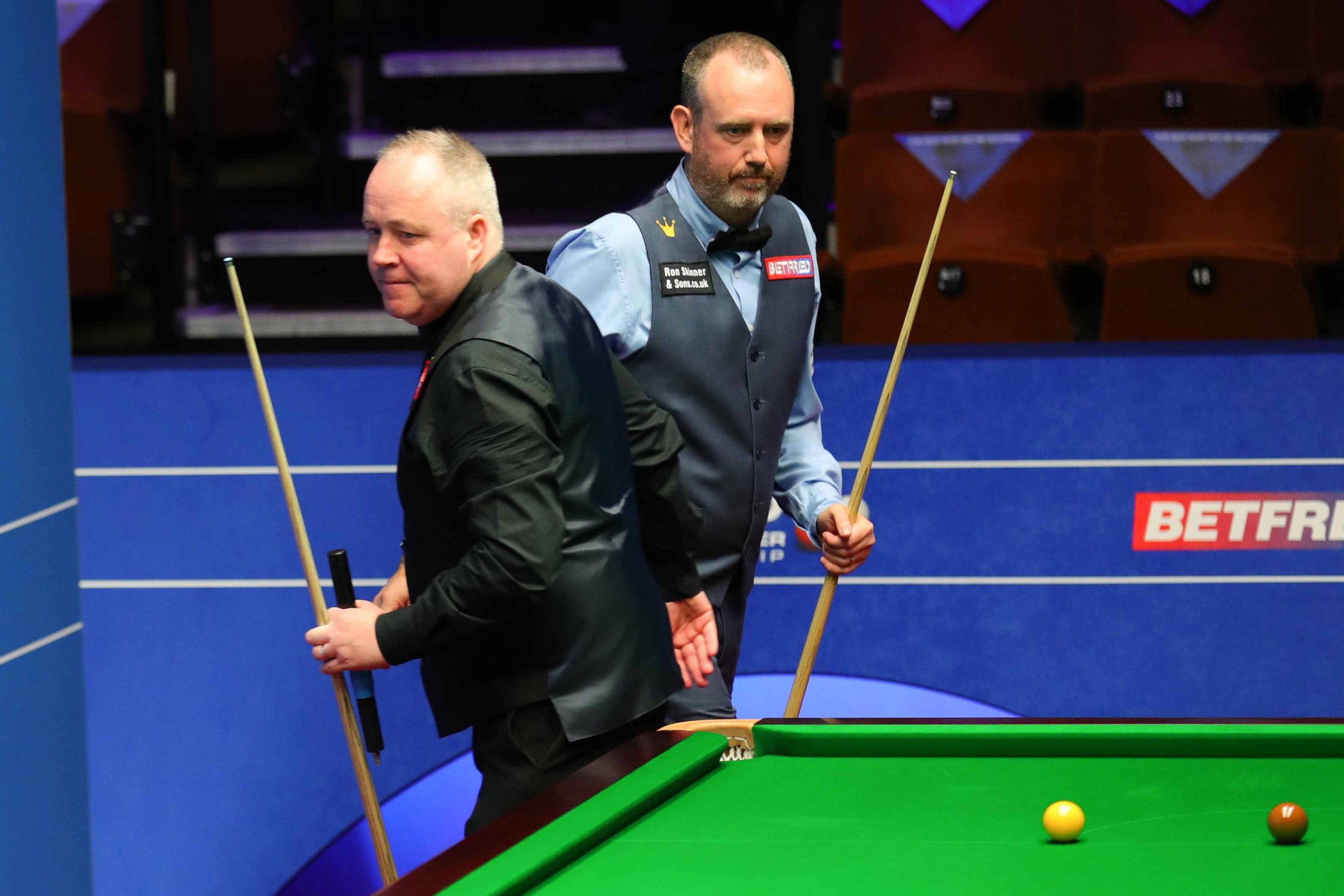 Mark Williams put on a supreme performance to down familiar foe John Higgins 13-7 in their second round meeting at the Betfred World Championship.

The clash was a repeat of the 2018 world final, when three-time Crucible king Williams defeated four-time World Champion Higgins 18-16 in an epic contest.

Welshman Williams, who has described his current brand of snooker as “carefree”, has officially become the fastest player in the world during this event, moving to the top of the average shot times. Williams is now taking just 18.1 seconds per shot for the season.

He will face either Mark Selby or Mark Allen in the quarter-finals. If he were to win, then 46-year-old Williams would be the oldest Crucible semi-finalist since Ray Reardon achieved the feat in 1985, aged 52.

Defeat for Scotland’s Higgins extends his wait for a fifth world title. The Glaswegian last won at the Theatre of Dreams in 2011. However, he does end the season having notched up the 31st ranking title of his illustrious career, after victory at the Players Championship last month.

Williams came into this evening holding a 10-6 advantage following a morning session, which saw Higgins take the final three frames to keep his hopes alive.

Williams started fastest tonight, crafting a break of 76 to extend his advantage. Despite Higgins pulling back to 11-7, it was Williams who fired in runs of 85 and 77 to burst over the line and clinch a place in the quarter-finals.

Williams said: “I think I played really good solid stuff the whole way through. I can’t play much more solidly than that. My safety was good and some of my long balls were good. Some of the ones I went for were ridiculous. I loved every minute and I was enjoying it.

“If I get on a roll, I can win a few frames in half an hour. It can put a bit of pressure on their safety more than anything. If their safety isn’t any good, I’m going for it regardless of where the balls are.

“I probably played as well tonight as I did back in 2018. I’m just being honest though. Back in 2018, I thought I had a great chance of winning this and told people that before we even started. I don’t feel like that this year. If I felt like that I would tell you, whether or not you believe me, I don’t know.”

Mark Williams has been impressive so far. His defensive break-off is spreading … the whole “class of 92” has been using it, Mark Allen as well yesterday.

It seems that WPBSA will take no action. They decided to send that email after they were approached by a small group of players from what I read. The feedback apparently showed that the majority didn’t see an issue with it. I still feel that even considering to ban a perfectly legal shot just because it displeases some is a very dodgy move.

Judd Trump was one of those who criticised Williams for using it. He argued that nobody wants to waste five to ten minutes “sorting it out”. Only that it’s nonsense as it’s usually back to normal after three or four shots, with the black free as a bonus. Not even the slowest pair of players will spend as long five minutes on that.  The truth is probably that not being left a long red off his opponents break-off peeves him… 😉