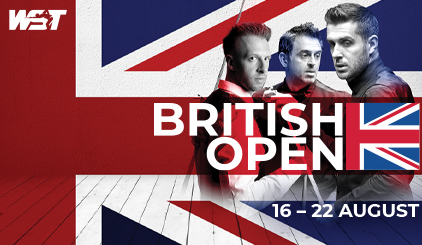 Star names including Ronnie O’Sullivan, Judd Trump, John Higgins, Stephen Hendry and home favourite Mark Selby will be in the line-up for next month’s British Open at the Morningside Arena in Leicester.

The world ranking event will run from August 16th to 22nd and fans will be welcomed through the doors to see the greatest players on the planet.

Plus Kyren Wilson, Mark Williams, Jack Lisowski, Leicester favourites Tom Ford, Ben Woollaston, Joe O’Connor and Louis Heathcote…and many more. In all there will be 128 players battling for the trophy and a top prize of £100,000.

The event will have a completely random draw for all rounds, and the first round draw and match schedule will be released on Wednesday July 28th.

The British Open previously ran from 1985 to 2004 and now returns to the WST calendar after a 17-year absence. It will receive extensive live coverage in the UK from ITV, as well as a range of broadcasters worldwide.

All matches up to the last 16 are best of five frames, the quarter and semi-finals are best of seven frames, and the final is best of 11 frames.

But then, in the evening Ronnie posted this on his Instagram

So what happened? Did Ronnie initially intend to play in the event but changed his mind and why?  Or was there some kind of misunderstanding between him and WST?

Ronnie O’Sullivan has withdrawn from the British Open, which takes place from August 16-22 at the Morningside Arena in Leicester.

O’Sullivan decided to pull out before the draw was made for the world ranking event. He is replaced in the field by James Cahill.

The draw and format will be announced next week.

Also, I’m pretty surprised to see Stephen Hendry commiting to this: it’s an ultra short format, a random draw in every round, loads of matches every day, meaning loads of players around the venue and likely limited access to practice tables …  all that surely isn’t exactly Stephen’s cup of tea? And, thinking about it,  it’s probably not Ronnie’s cup of tea either going by some of his past comments.

Also there is no mention of Neil Robertson, but there we do have an explanation: indeed, earlier this week David Hendon, in commentary, mentionned that Neil was getting married in the coming weeks….

Congratulations and loads of happiness Neil and Mille!