The television coverage of the 2021 British Open started with a bang! The defending champion was in action on the main table and produced a maximum break from his very first shot!

Here is WST report about the morning and afternoon sessions 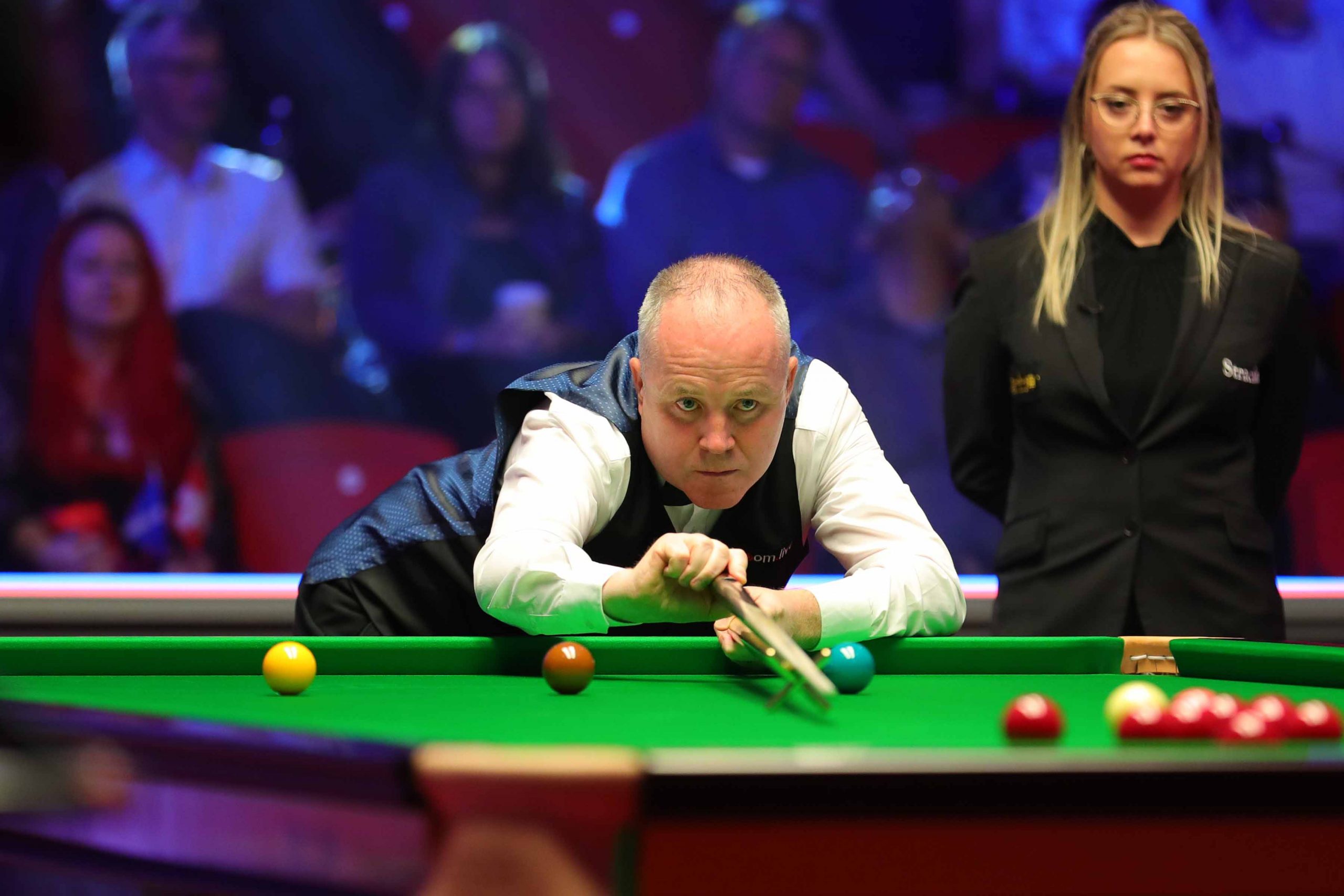 Scotland’s four-time World Champion John Higgins fired in the 12th maximum break of his career in a 3-1 first round win over Alexander Ursenbacher at the matchroom.live British Open in Leicester.

Higgins now moves clear of compatriot Stephen Hendry, who has made 11 maximums. Only Ronnie O’Sullivan has composed more 147 breaks, having made 15.

The magic run came in the very first televised frame on ITV4 this season and the opening frame of the match. It is the 167th official maximum break in snooker history. Higgins is now in position to pocket the £5,000 high break prize.

The Scot, who won the British Open the last time it was held back in 2004, has turned to spin classes in order to lose weight and gain fitness whilst preparing for this season.

Switzerland’s Ursenbacher did respond by claiming the second frame with a fine clearance of 61 to make it 1-1. However, it was Higgins who sprinted to the line with breaks of 78 and 57 to wrap up the 3-1 win.

“I’m delighted. Any time you make one is great, but to do it from the first shot for the coverage of the event is brilliant,” said 31-time ranking event winner Higgins. “I knew it was on, but I was also trying to win the frame and not do anything stupid. When I was on about 60 I could have played up for the pink but I decided to try and get back for the black and go for it.

“I just automatically felt a little bit more free walking around the table (having lost weight over the summer). It should help you produce better snooker. I don’t know how many more years I will be playing, so it will just help trying to be able to compete with the top guys for as long as possible.”

Snooker legends Ken Doherty and Jimmy White secured impressive 3-0 victories to get their names in the hat for the second round draw, which will be made on Tuesday afternoon.

White defeated Irish teenager Aaron Hill, while Doherty fired in a fine run of 77 in the third frame to see off Zak Surety. Afterwards Doherty admitted that he is in favour of open draw format in operation this week.

Doherty said: “I love the format – the FA Cup style draw and the short matches. It’s great to have a different format and the fans get to watch a lot of matches.

“I’m in the twilight of my career and just enjoying myself. If I win I’m elated, and if I lose I don’t get as deflated as I used to. That’s the right psychology.”

There are five players from Leicester competing this week and the local players had mixed fortunes today. Louis Heathcote and Joe O’Connor enjoyed 3-2 wins over Yuan Sijun and Steven Hallworth respectively. However, Ben Woollaston succumbed to a 3-2 defeat against Hammad Miah.

Some commentator went on raving about this 147 made from the “first shot of the tournament”.  The 147 was very smooth and never looked in doubt, but there had been a full session of snooker played in the morning before ITV started showing the snooker and this happened!

One of those morning matches saw two young players do battle as Joe O’Connor beat Steven Halworth by 3-2 from 2-0 down. This match was available on the ES player (outside the UK) and it was high quality and entertaining. Both players showed great tactical skills as well as scoring power: every frame featured a 50+ break!

I’m not sure if Mark Williams will see his own performance as “fine”: neither he or his opponent played well!

Ken Doherty admitted that the format suits him. It probably suits Jimmy White as well. Both of them have loads of experience with pressure situations, which is what the players face right from the start here. On the other hand, older player often struggle to sustain their best level and concentration over long matches. Consistency is often an issue but not in this very short format.

The evening session was always going to be about Judd Trump and the “grudge match” between Reanne Evans amd Mark Allen.

Trump Clings On To Top Spot

Judd Trump survived a tense opening round clash with Mitchell Mann at the matchroom.live British Open, winning 3-2 to cling on to his world number one spot.

Trump has occupied the summit of the world rankings since August 2019, but Mark Selby’s victory at the World Championship has put that under serious threat.

With the £175,000 top prize which Trump claimed at the 2019 International Championship due to come off his ranking at the end of this event, he must at least better Selby’s performance this week to retain his world number one position.

It was world number 98 Mann who made the early running by establishing a 2-1 advantage. However, 2019 World Champion Trump restored parity with a break of 52 to force a tense decider.

Trump had looked set to ease over the line before breaking down on a run of 62. Mann fought his way back into the frame, but his contribution was ended on 34. A safety battle ensued and Mann eventually got his opportunity after fluking the brown. However, he missed the blue and Trump made no mistake in getting himself over the line.

“We probably could have played a best of 19 in the time we took to play a best of five,” joked Trump. “You are going to get drama straight away. Instead of waiting two sessions to get to the end of the game, you get it at the very start. You are under pressure from the very beginning and all it takes is a bad bounce or a kick to change the whole game.

“It’s nice to delay losing the world number one spot for as long as possible. It is going to be very tough now to stop Mark from overtaking me with how the rankings are.”

The Northern Irishman took the opening frame. However, Evans fired her way back into contention. She restored parity, before a break of 56 helped her into a 2-1 advantage.

Evans had then looked set for a momentous victory, but broke down on a run of 60. Allen eventually fought his way back into the frame and stole it on the black with a superb clearance of 47. Allen showed his class in the decider, securing victory with a steely break of 68.

Allen said: “I thought Reanne played really well and was unfortunate not to go on and win 3-1. I hung in there and made a really good clearance for 2-2 and did what top players do and made a one-visit in the last.”

Judd was unconvincing but he’s through. Countless times last season he has looked vulnerable at the start of a tournament but went on to win it.

I was afraid that Reanne could be outplayed, but this wasn’t the case at all which is an encouraging sign for the Women’s Snooker World Champion. She got a lot of support from the crowd. Mark Allen showed class in his post-match interview.

Reflecting on the draw before the match started, Neal Foulds said that he hoped everyone would be watching Allen and Evans “for the right reasons”.

“Let’s just get this match over with,” he said. “Get someone through and hopefully come out of it okay, because it’s not a nice match-up.

“I don’t think it’s what snooker necessarily needed but they’re both on the tour so that’s how it is.”

It wasn’t a great day for the Asian players  in general, and for the Thai players in particular. However Bai Langning shone again as he beat Ashley Carty by 3-0 to progress.

In other news, Rory McLeod got a bye to the second round as Kurt Maflin withdrew. No reasons for this withdrawal have been given so far.