Skip to content
Home2021 English Open Draw and other news

WST has published the 2021 English Open draw and qualifiers format:

The draw and format for the 2021 BetVictor English Open is now available.

The qualifying round will run from September 17 to 22 at the Barnsley Metrodome, followed by the final stages at the Marshall Arena in Milton Keynes from November 1 to 7. The matches involving the top 16 seeds and the two wild card nominations will be held over to the final venue. 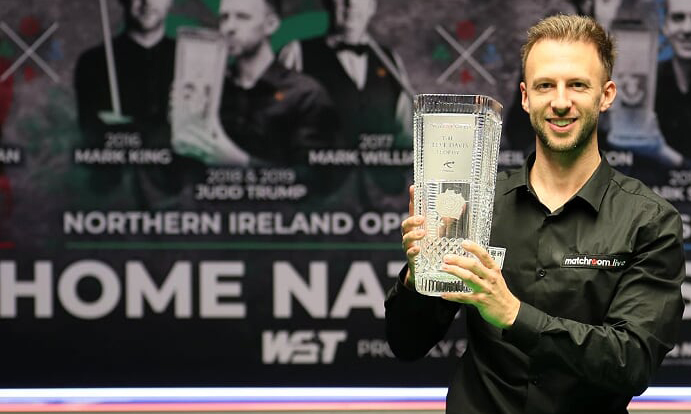 Judd Trump, who beat Neil Robertson 9-8 in the final last year, will start the defence of his title against Matthew Selt.

On Yee is in the draw and, should she make it to the UK is due to play Stuart Bingham at the main venue. Ding Junhui is also in the draw. Let’s see what happens.

Ronnie might face Elliot Slessor in the last 64… probably one of the worst draws he could have.

Throughout the 2021/22 season, we’ll be following the fortunes of six of the most promising young players on the World Snooker Tour in our new video documentary Make or Break.

Episode one of the series is here:

Narrated by Alan McManus, Make or Break will include exclusive footage from behind the scenes at WST events as well as interviews with the six featured players:

The series will follow their progress as they aim to make their way towards a successful career in the sport. Episode two will be released in September.

It’s good to see WST finally put some young players in the spotligths and Alan is a great choice as a narrator.

After nicking Michael McMillan from the Snooker Scnene podcast, WST have published their own thing  and the first episode is with Judd Trump

Here is Eurosport take on this one:

Snooker news: ‘He’s very clever’ – Judd Trump on why Ronnie O’Sullivan will be at top for another decade

Judd Trump has praised six-times world champion Ronnie O’Sullivan for picking and choosing his events. O’Sullivan has pulled out of the season’s first two ranking tournaments at the Championship League and British Open, but Trump believes he is wise to be selective with his choices as he bids to extend his career. The world number two feels O’Sullivan will be inside the top 16 for another decade.

Ronnie O’Sullivan will be a serious contender for snooker’s biggest titles for at least another decade, according to fellow crowd-pleaser Judd Trump.

World number two Trump has praised O’Sullivan for picking and choosing his events after the six-times world champion opted out of the first two ranking tournaments of the season at the Championship League and British Open.

In a timely demonstration of sporting longevity, O’Sullivan’s fellow ‘Class of ’92’ member Mark Williams lifted the 24th ranking event of his career with a vintage 6-4 win over Gary Wilson that included two century breaks at Leicester’s Morningside Arena.

In his 29th year as a professional, it is the second ranking title Williams has won this year after his success at the inaugural WST Pro Series event in March.

“Myself, John Higgins (four-times world champion) and Ronnie O’Sullivan having turned pro together all those years ago, we are still hanging around like a bad smell,” he told reporters on Sunday.

I have dropped down the rankings a few times and come back up, but we just seem to be sticking around for a lot longer than people expected.

While O’Sullivan, 45, reached five finals last season, he failed to win a ranking event for the first time since the 2010/11 campaign, but Trump feels being selective is the key to being competitive for at least the next 10 years.

The Chigwell man is due face Stuart Carrington in the first round of the Northern Ireland Open at the Waterfront Hall in Belfast which begins on Saturday 9 October. Trump has curiously defeated O’Sullivan 9-7 in the past three finals of the event.

“I’ve got so much respect for him,” said Trump on WST. “Every time I play him, it is always a special occasion.

To be honest, I think he can play the game until whenever he wants to. He is that good.

“The way he doesn’t enter every event is only beneficial for him. He keeps the public wanting more and more. He doesn’t give you too much in one go.

“So, just as you think he is getting a bit bored with snooker, he’ll take that tournament off, he’ll pull out. He knows he’s not ready and I think he is very clever in that way.

“He’ll always be the crowd favourite just because of how easy he makes the game look.

John Higgins is up there with him, but Ronnie just makes it looks so easy. I think that is what annoys the viewing public because he kind of looks invincible at times.

“When he doesn’t win, they think he’s not trying so he’s built up this image that he can’t be beat and it adds a lot of pressure to yourself I think.”

At 44 years and 254 days, O’Sullivan became the oldest man to win the World Championship since Reardon (45 years and 203 days) in 1978 when he overcame Kyren Wilson 18-8 in Sheffield to lift his sixth Crucible title a year ago.

Trump admits the strain to keep producing under pressure means it is impossible to play in every tournament.

“Over the past two or three years when you keep winning events, you kind of see what he has been through,” said Trump. “The past 15 years, the expectation he has had on himself.

I just think he knows what he is not ready to give it his all and he’ll skip those events. For me, when he wants to stop playing, he’ll stop playing, but he’s good enough to be top 16 for at least another 10 years.

Trump lost his world number one spot to world champion Mark Selby after a two-year stay at the summit following his 3-2 defeat to Elliot Slessor in the last 32 of the British Open on the same day he turned 32.

He is set to reclaim top spot after the Northern Ireland Open with Selby set to lose £102,000 from his points tally on the two-year list, but Trump feels the ranking system puts far too much emphasis on earning £500,000 for lifting the world title.

Trump celebrated his first ranking event with a 10-8 win over Selby at the 2011 China Open.

He claimed his first eight in six years, but has lifted another 14 in the past four years in a remarkable period of consistency.

Trump totted up a record six in 2019/20 and another five during the pandemic in 2020/21, but is bemused about losing the top spot.

“Nobody has ever won six events in a year,” said the 2019 world champion, who begins his bid for a fourth straight Northern Ireland title against Andrew Pagett in Belfast.

“The year before I won the Masters, the World Championship and another couple of events.

“Then the following year I won five events. There is always that comparison with Ronnie or the world champion about who is the best in the world.

“But for me, I don’t think you can compare winning the World Championship to winning six events in a year that nobody has ever done before.

“If somebody came up to me, and said to me: ‘You’ve won the World Championship, but Mark Selby has won six or seven events, do you think you are the best in world?’

I’d say no. For me, Mark Selby would be the best in the world because he has shown it on a consistent level. The World Championship is a special event, but it is only one event.

“It is too lopsided because the world champion is always going to be number one and for me to prevent that over the past two years is literally an impossible task.”

About the latter bit, I’m not sure Judd would see things in the same light if he was the World Champion. At the the World Championship luck is usually less a factor than in any other comp because the length of the matches. Kyren Wilson and Anthony Mc Gill may disagree, but statistically this remains true.