With not much action in the coming day here are two pieces published in the news:

Mark Williams reckons that Ronnie owes him a favour…

Mark Williams reckons Ronnie O’Sullivan owes him a ‘massive favour’ after his British Open win is set to secure the Rocket in this season’s Champion of Champions event.

Williams claimed the British Open title on Sunday 22 August, beating Gary Wilson 6-4 in the final in Leicester and he gave his old rival a helping hand in the process.

O’Sullivan, quite remarkably, reached five ranking finals last season but failed to win any of them, so didn’t manage to book a spot in the Champion of Champions by lifting any silverware.

However, due to players winning multiple titles over the last year, places in the event are opened up to the highest ranked players who didn’t manage to qualify.

With the Rocket ranked number three in the world and Williams stopping Wilson from qualifying for the event, O’Sullivan is set for a return to the Champion of Champions and the Welshman is expecting a thank you from his fellow Class of ’92 legend.

Speaking after his British Open glory, Williams spoke of the remarkable achievement that he, O’Sullivan and John Higgins are still competing at the top of snooker nearly 30 years after turning professional.

‘Myself, John Higgins and Ronnie O’Sullivan having turned pro together all those years ago… we are still hanging around like a bad smell,’ Williams told The Sportsman.

‘I have dropped down the rankings a few times and come back up. But we just seem to be sticking around for a lot longer than people expected.

‘I have always believed there are definitely more titles out there for the other two, but I have won another one here and won one last season – so who knows, maybe I can get a couple more?

‘And by winning this week I may have guaranteed Ronnie a place in the Champion of Champions on his world ranking, so that could be a massive favour he owes me.’

Williams took his ranking title tally to 24 with his victory in Leicester cementing his place at fifth on the all-time list behind O’Sullivan (37), Stephen Hendry (36), Higgins (31) and Steve Davis (28).

The Welsh Potting Machine thinks that players of his era and older were only limited by the number of events they played in during their pomp and Judd Trump (next on the list on 22 titles) has a great chance to surpass them due to the regular tournaments on the calendar now.

”Judd has won 11 in two years. There were only 12 tournaments in total in two years at one time.’

The Class of ’92 and Trump will have their next chance to add to their ranking titles at the Northern Ireland Open, with the main stages starting on 9 October in Belfast.

The Northern Ireland Open and then the English Open offer qualifying chances for the Champion of Champions in November, but even if there are two unqualified winners at those events – which aren’t O’Sullivan – that will still only be 15 different champions for the event and the Rocket will take the final spot on the world rankings.

So about this one…

This appeared yesterday on news feeds 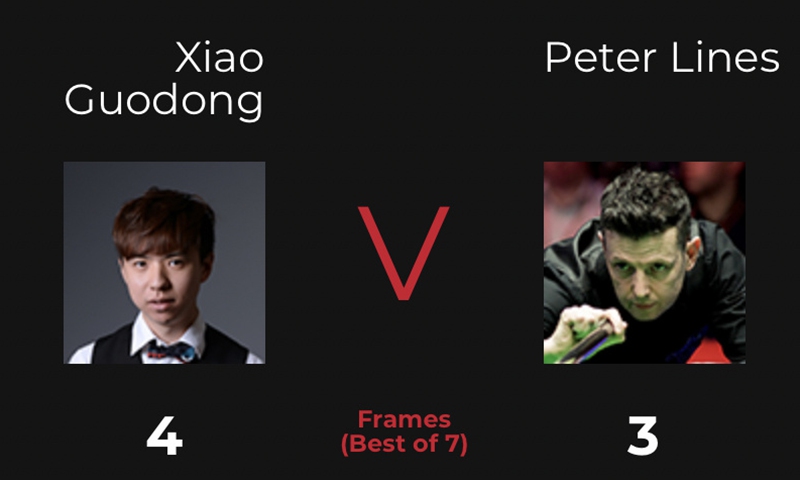 Chinese snooker player Xiao Guodong said on China’s Twitter-like Sina Weibo on Friday that he was abused by British rival, Peter Lines ,with swear words after winning a match. Xiao reported the rude behavior to the World Confederation of Billiards Sports (WCBS). “I do not make trouble but also am not afraid of any trouble,” Xiao wrote.

The incident has been considered “a very ungentle scene at a gentle event” on Sina Weibo and in media reports. Chinese netizens strongly condemned Lines for not accepting defeat and insulting Xiao.

Xiao beat Lines by 4-3 and qualified for the Northern Ireland Open on Thursday. After the match, Lines abused Xiao in the lounge in front of other witnesses using “swear words.”

“Peter was also threatening Xiao to step outside the arena for a fight in front of a referee, which is not acceptable and quite intimidating for a player who is coming here from a different country,” according to a letter to the WCBS Xiao posted on his Sina Weibo account.

The letter also said that Wu Yize, Pang Junxu and Elliot Slessor were all witnesses of what happened, adding that security staff had to stop Lines from doing anything worse.

Xiao took to Sina Weibo again on Saturday to thank for all the support from netizens. “I have sent all the details to the WCBS and am waiting for them to announce the investigation results. I will not make trouble and I am not afraid of any provocation. I am a Chinese,” he wrote.

Many Chinese netizens stood by Xiao, supporting him to guard his rights and dignity.

“Do not need to be afraid! 1.4 billion Chinese people are all behind you,” one Sina Weibo user commented.

Netizens also urged the WCBS to investigate if Lines abused Xiao, adding that to correct the damage to the sports spirit, he must be punished and apologize.

“I agree with Xiao’s attitude. No one can unequally treat Chinese people, especially on sports events. We are waiting for a result together with Xiao,” another netizen wrote on Sina Weibo.

When I read this I was surprised for several reasons:

That’s weird to say the least. Why not put this on their website as well? Because, obviously, this was always going to land somewhere in a news feed or on social media sparkling questions and speculations.