Mark Allen beat John Higgins in a deciding frame yesterday evening to win his “home” tournament for the first time. The final was a very high quality affair. The Belfast crowd of course supported their man, but they were also fair and clearly appreciated the excellent standard of snooker offered by both finalists. 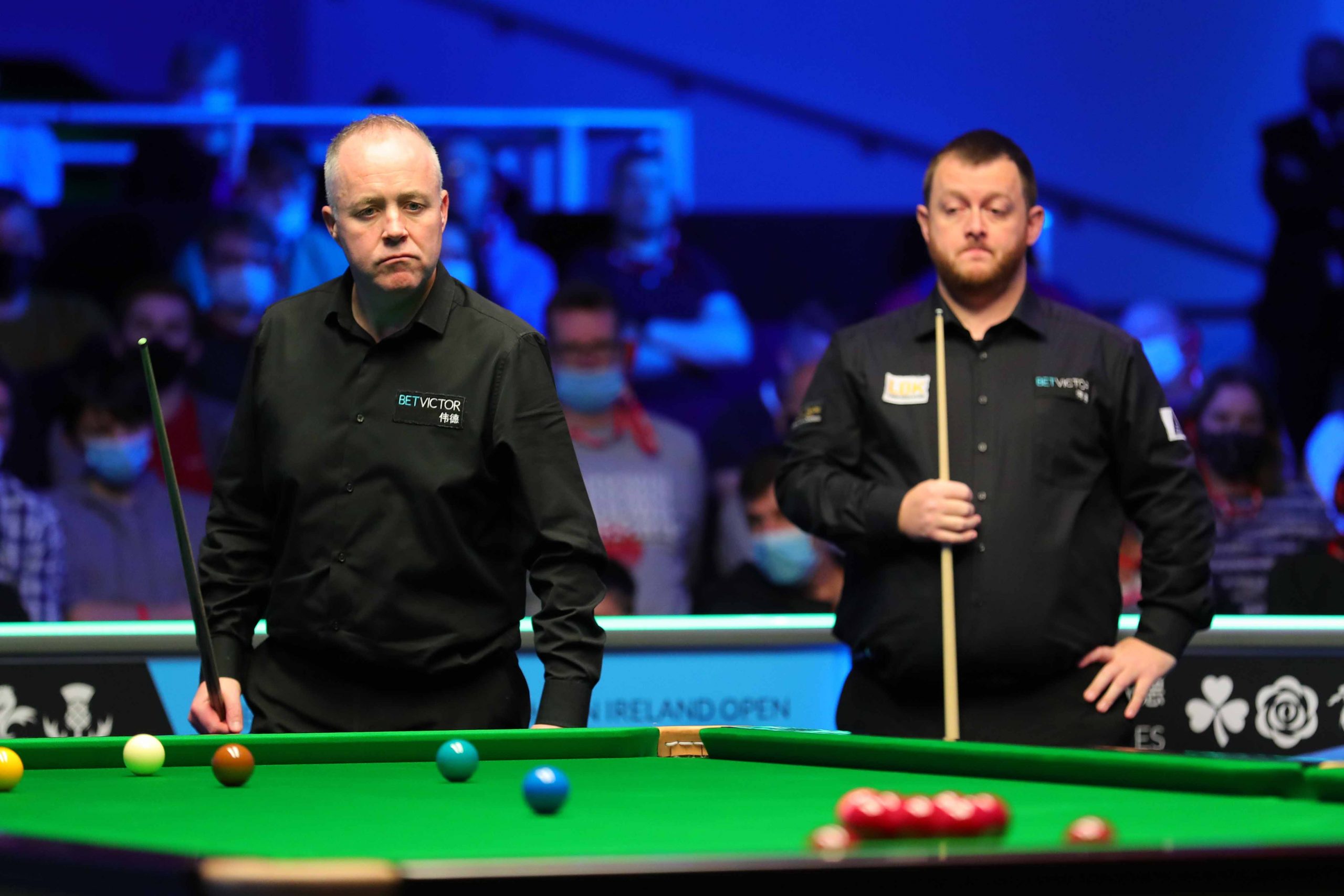 John Higgins produced a sensational clearance to draw level with Mark Allen at 4-4 after the first session of the BetVictor Northern Ireland Open final at the Waterfront Hall.

Scotland’s four-time World Champion Higgins and Northern Ireland’s former Masters champion Allen entered the arena to a raucous reception this afternoon and produced a captivating session of snooker for the Belfast crowd.

This is the 19th meeting between the pair, who stand at 9-9 in the head-to-head record. The winner this evening will receive £70,000 and claim the Alex Higgins Trophy for the first time.

It was Antrim’s home hero Allen who seized the early initiative this afternoon. He claimed the first frame, before a break of 82 saw him move 2-0 ahead. Higgins responded with a century run of 123. However, Allen won the fourth to head into the mid-session 3-1 ahead.

When play resumed a break of 68 saw Higgins pull within one. Allen then edged a 24-minute sixth frame to regain his two frame cushion and lead 4-2.

A run of 55 saw Higgins make it 4-3, before a dramatic climax to the session. Trailing 63-16, the Wizard of Wishaw conjured a stunning clearance of 48 to steal on the black and end the afternoon level at 4-4.

Play resumes at 7pm with the first to nine frames taking home the title.

It’s the sixth ranking title of 2018 Masters champion Allen’s career and it is the first time he has lifted silverware in his home event. Allen’s previous best in the Northern Ireland Open was a run to the quarter-finals in 2016.

An emotional Allen lifted the Alex Higgins Trophy amid a typically passionate atmosphere in Belfast. It is a first ranking title in three years, since the 2018 Scottish Open. He earns £70,000 for his victory, in addition to the £5,000 he will receive for his magical 147 break in the opening round against Si Jiahui.

This evening’s final was the 19th meeting between Allen and Scotland’s 31-time ranking event winner Higgins. They first crossed cues here at the Waterfront Hall in 2005 at the Northern Ireland Trophy, Allen won 4-1 on that occasion. He now leads the head-to-head standings with Higgins 10-9.

The afternoon action saw Allen and Higgins share the opening eight frames, to end 4-4 and leave the match on a knife edge. A cauldron-like atmosphere greeted the players as they entered the Waterfront Hall for tonight’s concluding session.

The pair produced a superb standard of play in the opening stages. Allen took to the front with a break of 70 to move him 5-4 up. Higgins responded immediately with 63 to take the tenth and draw level at 5-5. Allen regained the lead with a run of 85, before Higgins claimed the 12th to head into the mid-session all-square at 6-6.

From there Higgins made the first move with the finishing line coming into sight. Breaks of 64 and 136 saw him get within one of victory at 8-6. However, Allen displayed his considerable resolve to wrest back momentum and keep his title dream alive, by controlling the 15th to make it 8-7.

Higgins then had an opportunity to clinch victory, but missed a tricky black on 31 to allow Allen back to the table. He made 58 and went on to take the frame and force a decider.

With the match in the balance and Higgins leading 31-27, the Scot missed a difficult red to the top left corner and allowed Allen his opportunity for glory. The Pistol fired in a nerveless break of 38 under the utmost pressure to claim the title and send the Waterfront Hall crowd wild. 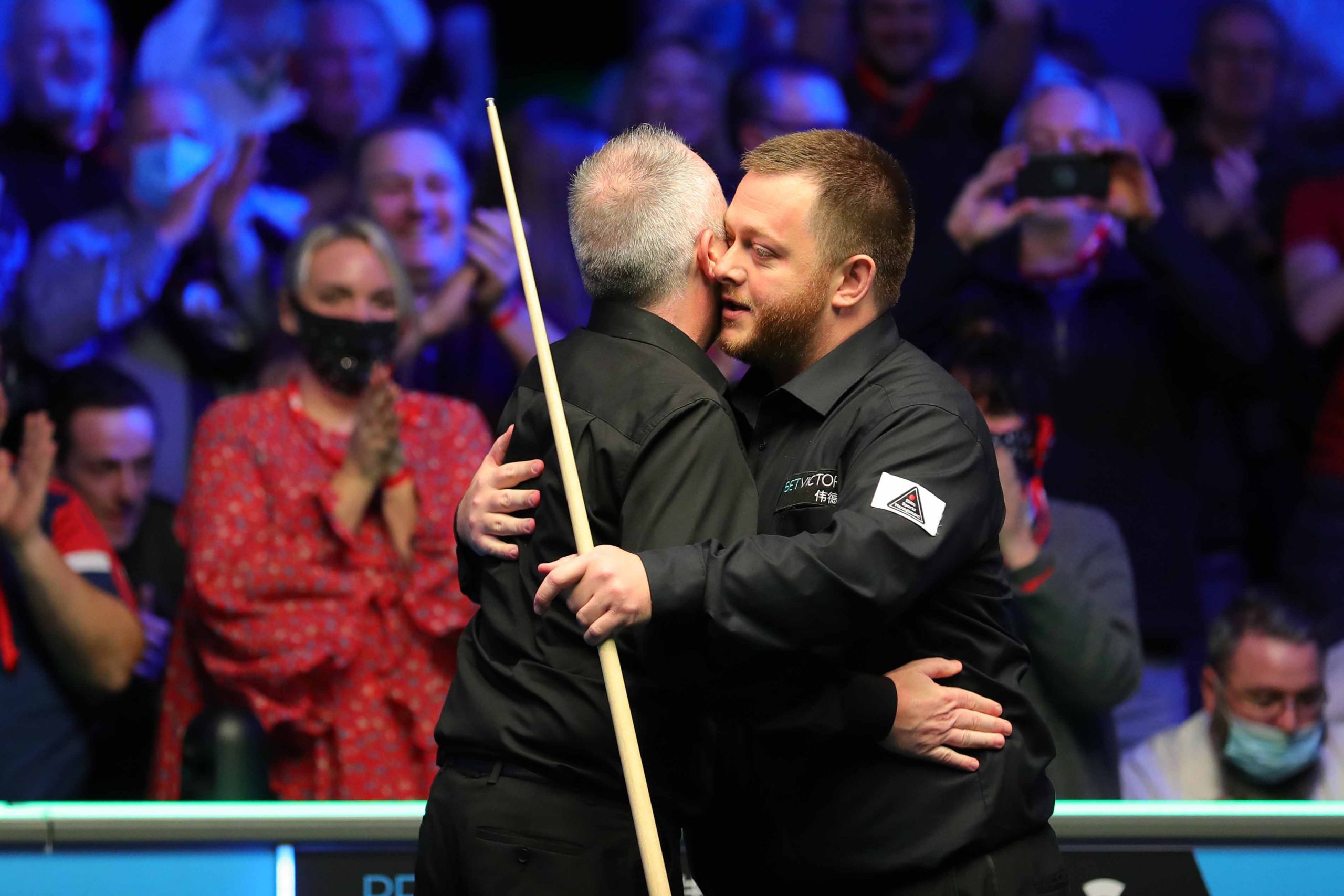 “I can’t believe it has actually happened, especially given my record here in recent years. I didn’t quite have my best stuff this week but what I did have was unbelievable resilience and determination. I never gave up. At 8-6 down I was getting completely outplayed,” said 35-year-old Allen.

“You are just hoping for a chance in the last frame. I needed two to finally get over the line. The buzz towards the end there on the last few balls, I wasn’t even sure if I’d be able to stand up and pot them. The roar from the crowd on every shot of that clearance was something I’ve never ever experienced in my life and maybe never will again. It spurred me on.

“Can I just say I’ve now won a tournament more recently than Jordan Brown (Welsh Open champion)? I was getting a bit of stick in the club about that! It is just amazing, two guys from Antrim who have won the last two Home Nations tournaments. The trophies are in the same club, on the same shelf. If we can do anything to get more young people playing the game in Northern Ireland we are doing our job.”

Higgins said: “Right now it is pretty disappointing. This game is all about making memories. I think Mark will probably have one of the best memories of his life having it here with his friends, family and his daughter.

“Every credit to him, at 8-6 he could have folded, but he played a brilliant frame to go 8-7 and put the pressure back on. He is a great ambassador for Irish snooker, so brilliant and well done.”

I’m genuinely happy for Mark Allen. Mark isn’t “Mr Perfect” and he isn’t pretending to be that faultless person either. When he was younger, for a while, he tried to be the “next Alex Higgins”. He’s much better just being Mark Allen.

Alex Higgins brought a lot to snooker, he changed the game forever, on form he was a top, top player and an entertainer. As a human being and a person however, he was a disaster: he was selfish, obnoxious, nasty and dishonest. Don’t anyone make excuses for that: yes, he had his problems, but other players had theirs too and never behaved like Alex did for it. Many tried to help him, he sabotaged their efforts.

Mark Allen does A LOT for his community through various charities and he actively supports young aspiring players in his area.