John Higgins beat Ronnie by 6-5 in the first semi-final of the 2021 English Open yesterday afternoon. Here are the scores:

Although, judging by the above scores, it looks like a great match, I have very mixed feelings about it. Both players struggled at times, and there were many mistakes, especially towards the end of the match. The conditions seemed to be heavy, with pingy cushions and it got worse as the match went on.

Ronnie didn’t play nearly as well as he did against Luca Brecel, his long potting in particular was not reliable. He also got increasingly frustrated with his tip, getting the file out after nearly every passage at the table.

Ronnie had a bit bad luck that didn’t help: playing to get a a snooker on the last red, he used the black to “stop” the white, only to see the said black slowly disappear in a top pocket; not only did he give his opponent a 7 points penalty, he also found himself snookered and failed to escape at first attempt … adding another 4 to the “gift”.

John was visibly tense too, especially in the last wo frames. He benefitted from two strokes of luck towards the very end of the match: first when after a miss, he left Ronnie touching the black and snookered on the last red, and later, when escaping a snooker on the final green, he left Ronnie snookered on it.

The way things were going for both, there is no certainty that Ronnie would have won the match from there, had he seen the ball on, but he may well have, especially, the second time, with only green, brown,blue, pink and black on the table; the green was very close to the yellow pocket and nothing was safe.

Eventually they were both laughing about it all.

It’s a second consecutive final appearance for 31-time ranking event winner Higgins, who was edged out 9-8 by Mark Allen in the title match at the BetVictor Northern Ireland Open in Belfast.

Tomorrow will be the 53rd time Higgins has graced a ranking event final. He will face either Neil Robertson or Mark King over the best of 17 frames for the Steve Davis Trophy and a top prize of £70,000.

Today’s meeting was the 70th between Higgins and O’Sullivan. Victory for Higgins means that six-time Crucible king O’Sullivan’s lead in the head-to-head is cut to 36-31, with the pair having also played out three draws.

O’Sullivan’s search for a first title since winning the 2020 World Championship goes on. He appeared in five finals last season, but couldn’t get over the line to capture the silverware.

The Rocket claimed the opener this afternoon, before breaks of 104 and 54 saw Higgins swoop to establish a 2-1 advantage. That proved to be the last time Higgins would hold the lead until the very end of the match. O’Sullivan took the fourth to ensure they headed into the mid-session all square at 2-2.

When play resumed breaks of 69, 108 and 103 helped O’Sullivan to win three of the next four frames to move one from victory at 5-3. However, 46-year-old Higgins responded with a steely run of 63 to keep himself in the tie and win the ninth.

O’Sullivan then had an opportunity to close out the match, but missed a difficult final red along the baulk cushion. That allowed Higgins to clear to the pink and force a decider.

An edgy final frame came down to the colours, with both players spurning chances to win. Eventually O’Sullivan left the green over the left middle when escaping from a snooker and Higgins took his chance to seal a place in the final.

Higgins said: “We were both gone in the last frame. It is a tough game. I know sometimes the top players make it look easy, Ronnie more than anyone, but it is a tough game when you are out there with the pressure on. I am delighted to get over the line.

“It is still as special as the first time I played him as a professional. It is always the ultimate test to play Ronnie. I thought it was a decent match up until the last couple of frames, then Ronnie dropped his standard and allowed me back in a little bit.

“I got up this morning and went to the gym for an hour. I have heard interviews with the likes of Ronnie and wondered why they are going to the gym in the morning. I would probably have been lying in my bed before, but when I get into that sort of routine it definitely gives me more of a burst of energy.”

45-year-old O’Sullivan said: “It’s just the way it goes. John deserved his victory and played well in the end so there’s not a lot you can do about it.

“I refuse to get disappointed. I’ve had a great week. It will go down as a smiley face and a good week. It has been good fun and nice to be involved in some good matches.”

Now – and I promise you that I’m not making this up in the aftermath – I told my husband during the match, that it sounded and looked as if the ball on was jumping slightly every time Ronnie had to hit it a bit hard. Interestingly, John Higgins said this in his post-match interview with Eurosport:

John Higgins has urged Ronnie O’Sullivan to stop focusing on his tip and switch brands of chalk.

O’Sullivan complained about his tip all week at the English Open, saying he was playing exceptionally well but unsure if he could cope mentally with the pressure of playing with such a bad tip.

The six-time world champion hit two centuries against Higgins, but they were not enough to prevent the Scot claiming a 6-5 win.

Higgins and O’Sullivan had a lengthy exchange after the conclusion of the dramatic semi-final, with the Rocket repeatedly pointing to his tip.

David Hendon said on Eurosport commentary that the O’Sullivan tip “is unlikely to be long for this world” but Higgins feels there is a more simple explanation.

“I said to Ronnie to get rid of that Triangle chalk,” Higgins told Eurosport. “I never used to be an advocate of this Taom chalk. But it felt everything for him was a kicky shot.”

The share price in sandpaper has likely increased, given the amount of work O’Sullivan was putting in on his tip between shots.

“I could see Ronnie was working away on his tip,” Higgins said. “He says it is the tip, but it is the striking of the cue ball. You can hear it on every shot. He says he loves his Triangle.”

Alan McManus added: “If you keep working away on it with a file or sandpaper, it changes the tip. It is never ever going to be perfect. You are never going to say ‘look, that’s it. That’s magic.’ You end up chipping away at it.”

O’Sullivan and Judd Trump are the outliers in the modern game with their use of Triangle chalk, and although he urged his great rival to change – Higgins feels the rest of the tour are benefiting.

“Two of the greatest break builders that have ever played snooker, in my eyes, and they don’t use the Taom chalk,” Higgins said. “I think it is a disadvantage for them.

“It was hard for Ronnie as he was thinking it’s his tip, but I was sitting watching and he was kicking every single shot.”

Whether Ronnie will listen, I’m not sure as he can be very stubborn at times.

Also you have to wonder why those two in particular stick with Triangle. The only explanation I can think of  is that the tip has slightly more “grip” with the traditiomal chalk than with the Taom one as players using it complained about getting more miscues especially with the first versions. Both Ronnie and Judd use side a lot and “less friction” makes it more difficult to create side.

The other semi-final was won by Neil Robertson: he beat Mark King by 6-4 but it was far from easy (WST report) 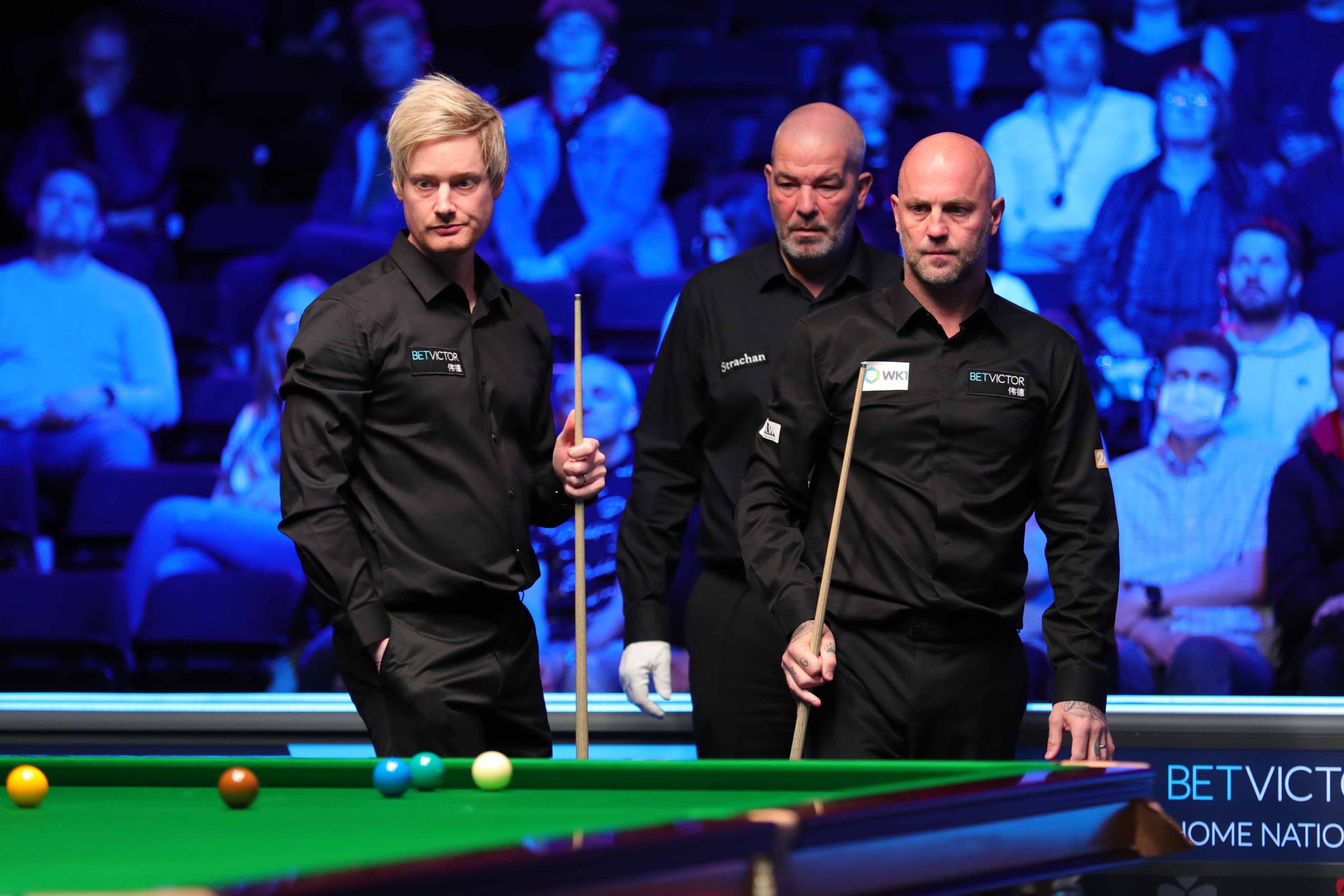 Neil Robertson is through to the BetVictor English Open final after a fiercely fought 6-4 win over Mark King at the Marshall Arena in Milton Keynes.

The Australian now faces four-time World Champion John Higgins in tomorrow’s final over the best of 17 frames, with the Steve Davis Trophy and a top prize of £70,000 on the line.

It will only be the second time that 2010 Crucible king Robertson and Higgins have met in a ranking final. Their first contest in a ranking event title match was at the 2013 Wuxi Classic, when Robertson won 10-7. Higgins leads the current head to head record 8-7.

Robertson, who has 20 ranking titles to his name, will be aiming to go one better than he did 12 months ago here in Milton Keynes. The Thunder from Down Under was narrowly edged out 9-8 in a thrilling clash with Judd Trump in the 2020 English Open final.

This evening’s loss ends an impressive week for 2016 Northern Ireland Open champion King. The Romford cueman defeated world number one Judd Trump in the quarters and will pick up £20,000 for reaching the last four. However, King remains without a win against Robertson and now trails their head-to-head 6-0.

Having shared the first two frames this evening, Robertson composed breaks of 51 and 52 in the third to move 2-1 ahead. King controlled the fourth and ensured they went into the mid-session level at 2-2.

When they returned King gained a foothold in the match by claiming two protracted frames on the bounce, a 33 minute fifth and a 25 minute sixth, to lead 4-2.

From that point on Robertson clicked into gear. He made breaks of 111 and 101 on his way to a four frame blitz which secured his 6-4 victory and place in the final.

“It certainly didn’t look like I was going to finish off the match the way I did at 4-2 down,” said 39-year-old Robertson. “I still felt really good, I just needed the chances. Luckily at 4-4 I got some good chances and I was able to make the most of them.

“There were a lot of really tough frames. It wasn’t negative from either of us, we were trying to make breaks. The balls just happened to run a certain way and Mark was very good once the balls found themselves in those situations.

“My family will all be here, I suppose the Higgins clan will be here as well. It is always a great occasion, especially when the two players have families. You always see both sets of the family and the two wives are normally joking with each other backstage. We are slogging it out while they are chilling out with the kids and having a better time than we do.”