WST has published the draw and format for the coming UK Championship:

Neil Robertson will start the defence of his Cazoo UK Championship title against John Astley at the tournament in York later this month.

The event runs from November 23 to December 5 at the York Barbican, with 128 players all needing to win seven matches to capture a title which was first contested in 1977.

The opening round from November 23 to 25 will be televised live by Eurosport, with the second round onwards screened globally by BBC, Eurosport, CCTV, Matchroom Live and a range of other broadcasters.

Tickets for the tournament are still available and start from just £8. Sessions are expected to sell out fast now that the schedule has been released so fans must book quickly.

The tournament returns to York for the first time since 2019, having been staged behind closed doors in Milton Keynes in 2020.

Robertson beat Judd Trump 10-9 in a dramatic final last year to capture the trophy for the third time. He meets amateur Astley on Thursday November 25 at 2.30pm. Trump will be up against David Lilley on the same day at 7.30pm. 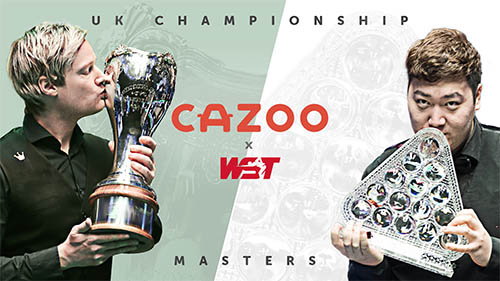 The second round begins on Saturday November 27. All matches are best of 11 frames up until the final on Sunday December 5 which is best of 19.

The Cazoo UK Championship is one of snooker’s Triple Crown events, alongside the Cazoo Masters and the Betfred World Championship.

Big thanks to Phil Haigh for “compiling” that for us, and providing a much more readable schedule of the event:

The first traditional major of the snooker season gets underway on 23 November as the UK Championship returns to York after a year away from its home in North Yorkshire.

The UK Championship moved to Milton Keynes last year due to the pandemic, but still delivered an epic final which saw Neil Robertson edge out Judd Trump in a deciding frame.

The draw for this year’s event has been made with Trump taking on World Seniors champion David Lilley and Robertson kicking off the defence of his title against John Astley.

The first round matches are all live on Eurosport with BBC coverage beginning at the second round.

I think that Michael White is a good draw for Ronnie. Michael plays an open game and doesn’t hang around.

I have put in blue the first round matches that I expect to be interesting  and close.

In green, I have put two matches that may spring a surprise. I still expect the highest seed to win them, but both Ross Muir and Fraser Patrick have shown good form recently. Those matches could be much closer than most expect.