I was expecting a Kyren Wilson v Barry Hawkins final, instead we have Luca Brecel v Zhao Xintong and I’m delighted to have been proved wrong. It’s been ten years since we had two young players in the Final of the UK Championship: the last time was in 2011 when a 22 years old Judd Trump faced a 25 years old Mark Allen Luca is 26 years old, Zhao is 24. It’s also the first time that a UK final is competed between two players outside the top 16. Whoever wins today will get into the top 16, kicking Zhou Yuelong out of the Masters.

Here is what happened yesterday 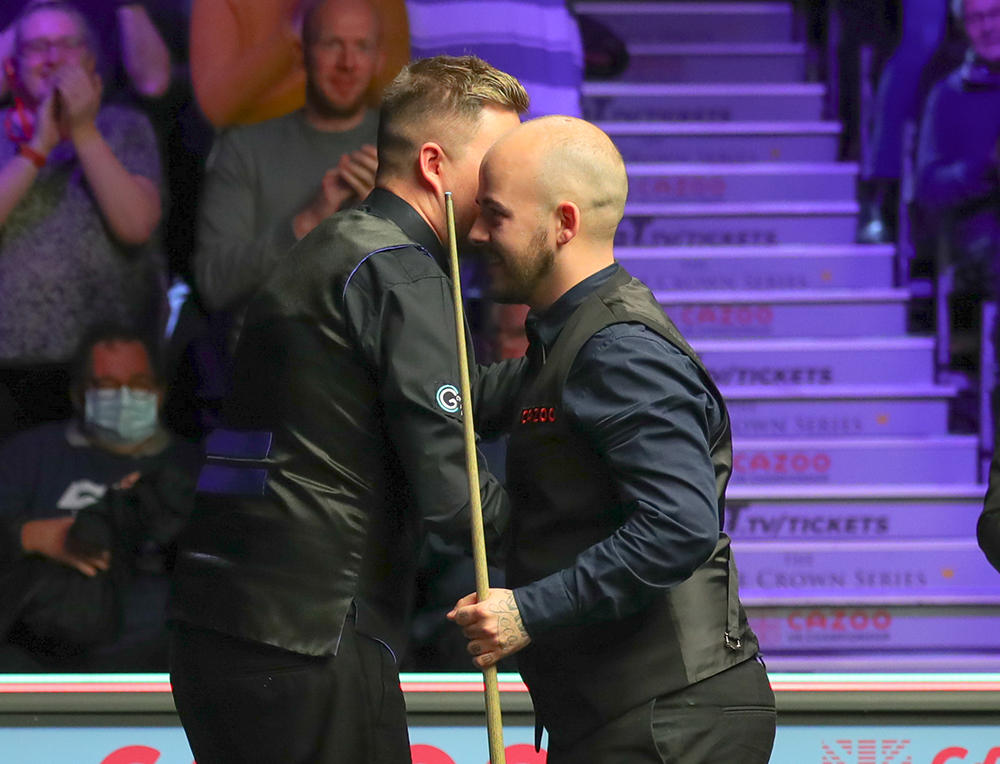 Brecel was in tears as he potted the winning balls of a fabulous match in York which featured five centuries and five more breaks of 50. “It’s a dream to play like that and win,” said the 26-year-old. World number 40 Brecel will face Barry Hawkins or Zhao Xintong over 19 frames on Sunday, with the winner to lift the famous trophy and collect £200,000. Victory would also propel Brecel into the top 16 and give him a place in the Cazoo Masters.

His only ranking title so far came at the 2017 China Championship and he now has the chance to double his tally and join the list of winners of one of snooker’s most historic tournaments, dating back to 1977. Victory for Brecel would make him the fourth non-British player to lift the trophy, after Patsy Fagan, Ding Junhui and Neil Robertson, and he would be the lowest ranked winner since Ding in 2005.

Brecel made only one century in his first five matches of this event, but today with a capacity crowd gathered around a single table, he caught fire. A break of 130 gave him the opening frame, then in the second he missed a red to a top corner on 14 and world number five Wilson punished him with a 121. The high scoring continued as Brecel regained the lead with a run of 105. In frame four, Brecel made 59 before failing to split the pack and playing safe. Wilson converted a plant from long range and cleared with 69 for 2-2.

Frame five was the scrappiest of the match and came down to a safety battle with four reds remaining. Wilson slotted in a red from distance and added enough points to take the lead for the first time. But he scored just one point in the next three frames as Brecel fired breaks of 102, 97 and 80 to go 5-3 up.

Kettering’s Wilson pulled one back with an 83, but his hopes of winning a first Triple Crown title ended in the next frame as Brecel made a 112, rounding off the match with a series of crowd-pleasing exhibition shots.

“It feels like the best I have played because of the stage of the tournament,” said Brecel, a pro since 2011. “I beat Shaun Murphy 4-0 once in Ireland and didn’t miss a ball. I have done it before, but to have the belief to do it today is so big to me.

“It was a huge match but I felt confident in my game. I was so nervous before the match – you can ask my girlfriend because I was grumpy! I had a century in the first frame and that settled me down. When I was on 20 or 30 in the last frame, I felt as if I was going to cry if I potted the winning ball. And when I potted a red on 67 I cried a little bit, it was very emotional, there is so much pressure out there.

“This will be big news in Belgium but I am going to try to block it all out, hopefully win tomorrow and then enjoy all the attention. I would love to play Zhao Xintong because it would be good for snooker to have two very young players in the final. But nothing against Barry because he is a nice guy and fantastic player. I will enjoy the final, I will be more relaxed and hopefully play the same stuff.”

Wilson said: “Without a doubt the better man won on the day, he was scoring phenomenally. Good luck to him for the final. At 3-2 I had a bit of momentum but then Luca took control.”

Zhao Xintong thrashed Barry Hawkins 6-1 at the Cazoo UK Championship to set up a final between two of snooker’s most electrifying young talents. 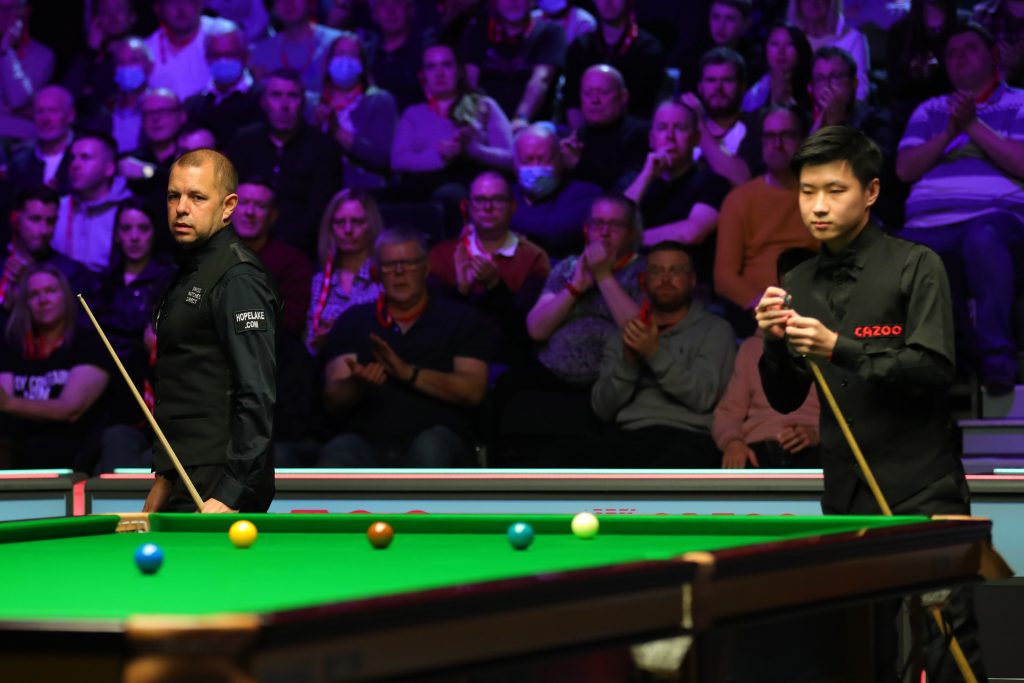 China’s Zhao needed just 100 minutes to dismiss the challenge of experienced Hawkins, making a century and five more breaks over 70 in a masterclass of potting and positional play.

On Sunday, over 19 frames, the 24-year-old will face Belgium’s 26-year-old Luca Brecel for one of snooker’s biggest titles and a £200,000 top prize. In an era dominated by the older guard, it’s a showcase for the sport’s next generation. As Zhao himself put it: “It could be a beautiful game.”

World number 26 Zhao will be playing in his first ranking final – his only previous semi-final appearance came at the 2018 China Championship. Victory would make him the fourth player from mainland China to win a ranking event, after Ding Junhui, Liang Wenbo and Yan Bingtao. Whoever comes out on top in the final will become the fourth non-British player to win the UK Championship, after Ding, Neil Robertson and Patsy Fagan.

As an added bonus, the champion will also climb into the world’s top 16 and earn a place  at the Cazoo Masters in London next month. Zhou Yuelong had held 16th spot but he is now out of that race. The draw for that event will be made on Sunday afternoon.

Breaks of 78, 78 and 100 got Zhao off to a fast start tonight with a 3-0 lead. Hawkins had a clear chance in frame four but on 22 he under-hit a red to a top corner, leaving it short of the pocket. Another run of 78 from Zhao put him 4-0 ahead at the interval.

Frame five came down to a safety battle on the final green, and an error from Zhao, failing to snooker his opponent, allowed Hawkins to pot the green to a centre pocket and clear the table to pull one back.

But a quickfire 74 from Zhao put him 5-1 ahead, and in frame seven a superb long red set him up for a run of 81 to seal the result. 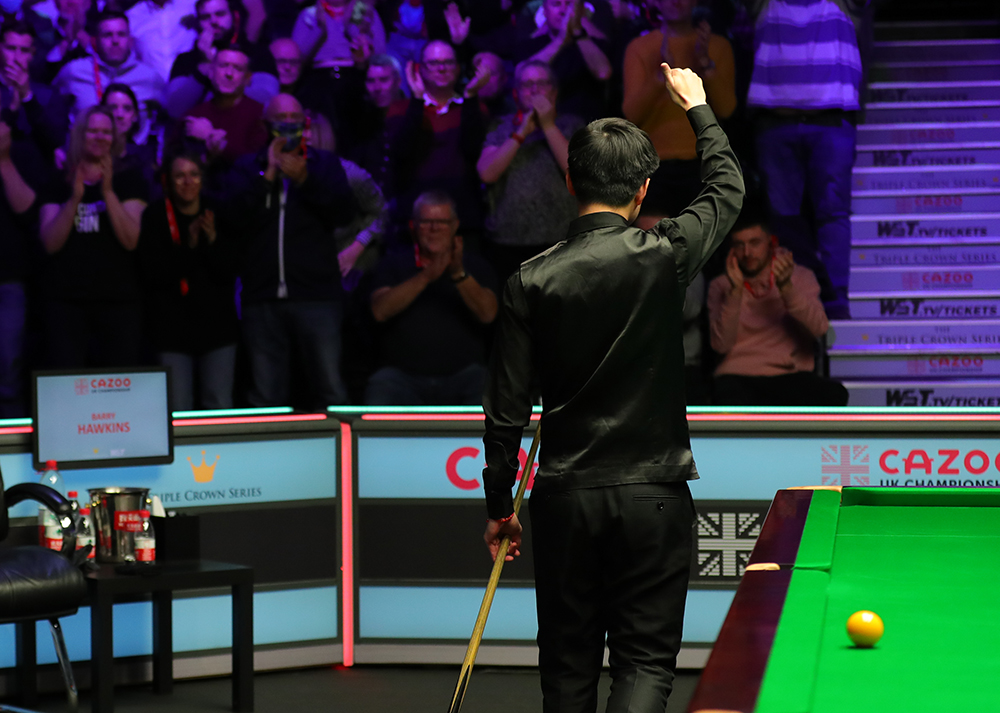 “I played well today, better than yesterday,” said Zhao, who is based in Sheffield during the season. “Jimmy White spoke to me, telling me to concentrate today, so I have to thank him. I was just thinking one ball at a time. It’s so exciting, I’m very happy.

“Tomorrow is a very important match for me and I’m so close to the title. Luca is a great player and I think it could be a beautiful game. His style is very quick and he is a young player. When I was 13 he was already world famous.

“I am a little bit nervous, I don’t know what will happen tomorrow. I hope I can sleep well tonight.”

Hawkins, who has now lost 20 of his 27 ranking event semi-finals, said: “Obviously I’m gutted. I started off too slowly, got in first a couple of times and just didn’t score. He fed off my of mistakes and then he grew in confidence and played fantastic at the end – every mistake I made was magnified.

“He scores quickly and he’s such a great potter, my safety wasn’t quite tight enough. There are a lot of positives from the week, I’ve made a semi-final in a big tournament.”

The final starts at 1pm with eight frames, with the balance to be played from 7pm.

I‘m relly lookig forward to this one! Good luck to both lads!

One thought on “The 2021 UK Championship – The Semi-finals”