Today we enter the business end of the 2021 Scottish Open. Only eight players remain and the format gets slightly longer. This is the line-up:

No Mark Selby, World and defending Champion, no Judd Trump.

Mark Selby took a long break after his fourth World title and now seems to struggle to recapture his best form.

Judd Trump has not got past the quarter-finals of any ranking event since winning the 2021 Gibraltar Open; in fact he hasn’t beaten a single top player this season in a ranking event, other than the badly out-of-sorts Stuart Bingham and, even that was in two very short matches (best of 5 British Open and best of 4 Championship League).

Those are the results – good or bad – that came as a surprise to me.

Lei Peifan beat Robbie Williams by 4-2. Lei is only 18 and Robbie is a solid match player. This is a very good result for the young lad.

Fergal O’Brien beat Kyren Wilson by 4-1. That was a big surprise: not just the result, but the scoreline as well. Fergal is not just a fierce competitor, he’s a heavy scorer when on his game. He had three breaks over 50 in that match, including a 140 in the last frame.

Scott Donaldson beat Steven Halworth by 4-3. Maybe not a surprise on paper but given how badly Scott has struggled so far this season, this is a good result. Also the manner of it is a sign that Scott is getting back to some form and hopefully some confidence: this match was decided on the last black.

Hammad Miah beat Yan Bingtao by 4-1: This is a worrying result for Yan Bingtao ahead of his Masters defence and it comes on the back of a last 64 exit at the UK championship as well. That said Miah can play; his problem is consistency.

Li Hang beat Shaun Murphy by 4-2: not really a surprise as Shaun is suffering from neck and shoulders injuries. Maybe he should take a break and give his body time to heal. He’s not going anywhere this way. Also, Li Hang is a very solid player who can beat anyone on his day.

Fun fact of the round: in the final frame of his 4-1 victory over Lee Walker, Jimmy Robertson set a new record for most points scored by one player in a single frame: 178. The previous record was 167 by Dominic Dale at the Crucible in 1999.

The last 32 didn’t really throw big surprises, but the last 16 saw both Mark Selby and Judd Trump exit the tournament. Mark Selby was beaten 4-3 by Anthony McGill, Judd Trump was beaten 4-3 by David Gilbert. Of course both Anthony and David are top players and those are short matches. What really surprised me is how both matches unfolded: in both cases the eventual winner got to a 3-0 lead, only to be pegged back to 3-3. Usually when Mark Selby comes back like this, he wins; this time he didn’t. In the past when David Gilbert was in such situation, having lost a significant lead, he wasn’t able to regroup; he did this time.

Here are the reports by WST, day by day 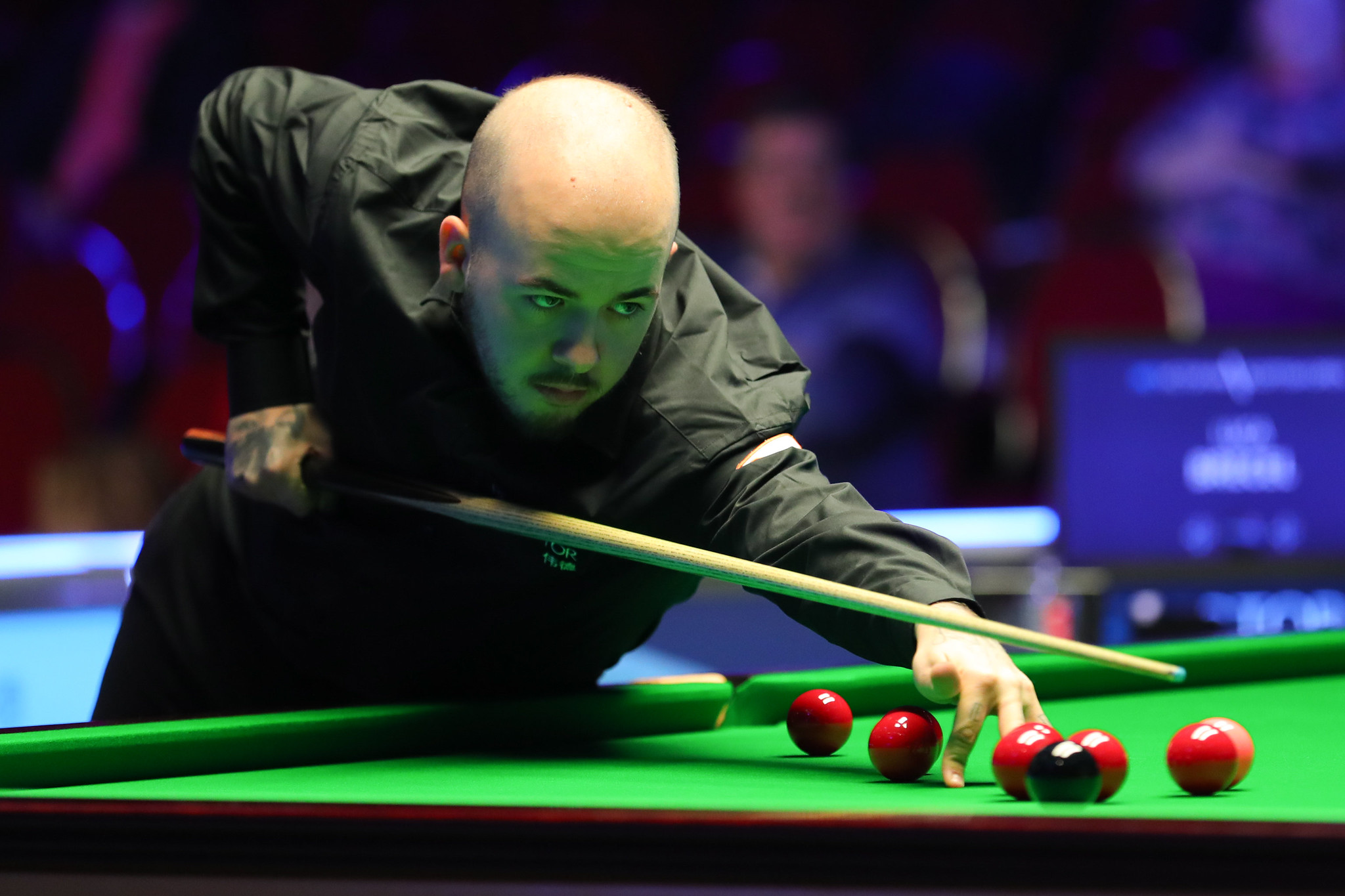 Belgium’s Luca Brecel edged a nervy encounter with Joe Perry 4-2 to continue his momentum from reaching the final last week in York and progress at the BetVictor Scottish Open.

Former China Champion Brecel made his first Triple Crown final at the Cazoo UK Championship after a superb run, which saw him beat the likes of Stephen Maguire, Anthony McGill and Kyren Wilson to reach the title match. However, he was denied the trophy by 24-year-old Chinese sensation Zhao Xintong, who swept to a 10-5 win.

This afternoon’s tie saw former Player Champion Perry move into an early 2-0 advantage, before Brecel pulled one back by taking the third. Perry had looked set to extend his lead, but he spurned a straightforward final pink and allowed Brecel to draw level at 2-2. He then won the fifth to edge one from victory.

The sixth frame came down to a black ball fight, with Perry fighting to force a re-spot. Eventually the Englishman deposited the black to move level in the frame. However, it was Brecel that got the better of the re-spot to win the match after Perry left the black over the right middle. He faces China’s Pang Junxu up next.

Brecel said: “The disappointment from losing the final is gone now. I am just proud and happy with the way I played. It is also a massive boost up the rankings for the rest of the season. Zhao also played unbelievable snooker so I couldn’t really do anything about it.

“The two main goals are to get in the top 16 for the Crucible and qualify for the Tour Championship. There are still a lot of targets for the season. I also like this tournament so it would be nice to go far here as well.”

Ronnie O’Sullivan blitzed to a quickfire victory against Michael Georgiou to reach the last 32, where he will play Liang Wenbo.

Breaks of 68, 88, 72 and 86 saw the Rocket surge to the whitewash in just 37 minutes. Georgiou was restricted to just three points throughout the encounter and his high break was 1.

“That was pretty quick. I got into the balls pretty early, made some good breaks and got into a nice little rhythm,” said 46-year-old O’Sullivan. “I feel like I’m thinking pretty clearly which is important. Listen, my game is never far away from clicking. If I get my head right and my game comes it will be interesting.”

Jimmy Robertson registered the highest single frame points total in professional snooker history on his way to a 4-1 win over Lee Walker.

Robertson won the decisive fifth frame with a score of 178. That defeated Dominic Dale’s previous record of 167. He now plays Scotland’s Anthony McGill.

Fergal O’Brien secured a surprise 4-1 win over Kyren Wilson, making a break of 140 in the final frame. The Irishman faces Gary Wilson in the last 32.

World Champion Mark Selby eased to a 4-1 defeat of Oliver Lines to set up a clash with Xiao Guodong, while a 4-1 win for Stephen Maguire against Sunny Akani earned him a tie with Tom Ford. 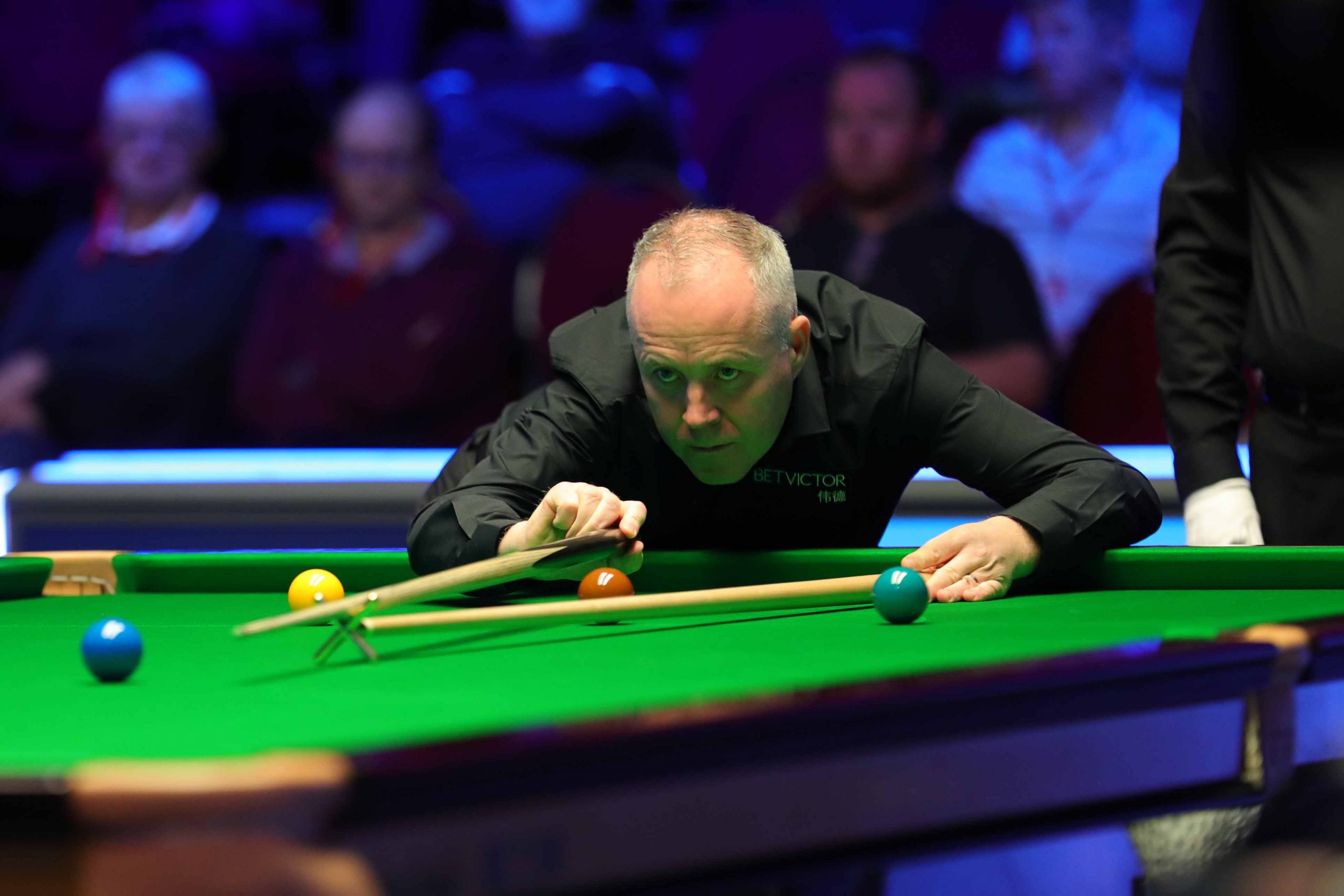 Higgins is aiming to get his name on the Stephen Hendry Trophy for the first time this week. He appeared in the final of the inaugural event back in 2016, but fell short against Marco Fu.

The Glaswegian has shown fine form thus far this season. Trips to the finals of the BetVictor Northern Ireland Open, BetVictor English Open have seen him comfortably secure a place at next week’s World Grand Prix, although he is still yet to lift silverware this season. Higgins was also runner-up at the recent invitational Champion of Champions event.

Higgins was comfortable this afternoon against a surprisingly out of sorts opponent in Saengkham. The 31-time ranking event winner composed breaks of 53 and 92 on his way to victory and will face Ryan Day up next in the last 32.

Higgins said: “I’m really pleased with the win. Noppon has had my number the last few times we have played. All of the snooker boys know how good he is. He’s improving every year. He didn’t play anywhere near he could and gave me a pretty easy game today. I wasn’t expecting that. I’m pleased with the win.

Ronnie O’Sullivan booked his place in the last 16 with a thrilling 4-3 win over China’s Liang Wenbo to make the last 16 and book an encounter with Jamie Jones tomorrow evening.

The Rocket extends his head-to-head advantage over former English Open winner Liang to 9-1. Liang’s only ever win over 37-time ranking event winner O’Sullivan came back in 2013.

It was Liang who opened up a 2-1 lead early on in this encounter, before breaks of 95 and 131 saw O’Sullivan blitz to a 3-2 advantage. Liang restored parity with a sublime break of 128 and had the first opportunity in the decider. He broke down on 39 and 46-year-old O’Sullivan ruthlessly stepped up to fire in a match winning break of 90.

World Champion Mark Selby survived a Xiao Guodong fightback to earn his place in the last 16 with a 4-2 victory. Two breaks of 71 had helped Selby into a 3-0 lead before Xiao fought his way back into contention. However, Selby edged his way over the line by controlling the sixth frame.

Victory means defending champion Selby maintains his 100% Scottish Open record, having won the title in the only two years he had contested the event prior to this week. He now faces Scotland’s Anthony McGill, who beat Jimmy Robertson 4-3.

Judd Trump sealed his progression with a quick-fire 4-0 win over Craig Steadman. The Ace in the Pack composed breaks of 105, 52, 80 and 104 during the 42-minute match. He now plays David Lilley in the last 32.

Only the top 32 on this season’s one-year list will gain a place for the Coventry event. Li retains an outside chance of sealing a spot after today’s victory. He faces Hossein Vafaei next. 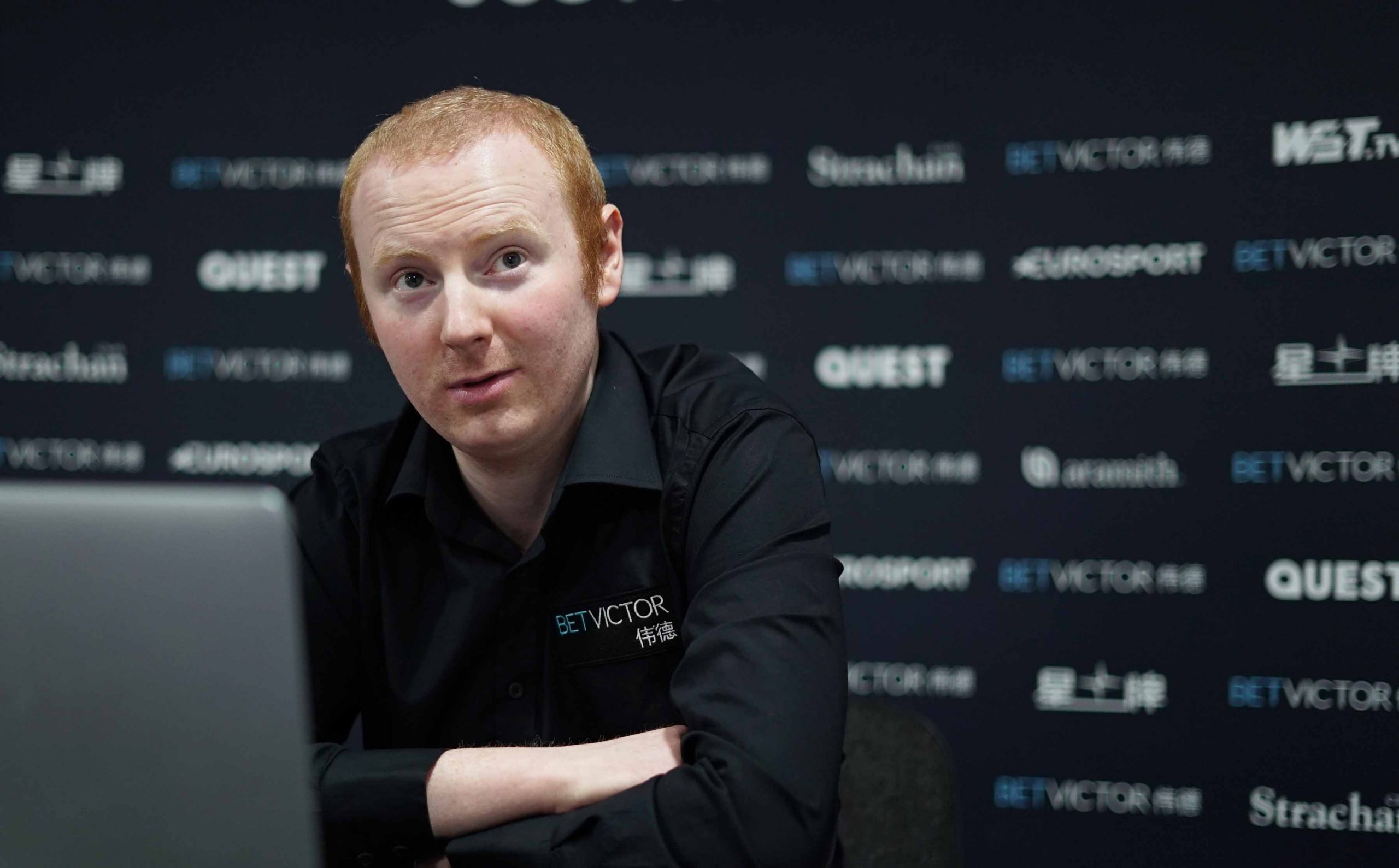 Anthony McGill held off a fightback from four-time World Champion Mark Selby to win 4-3 and clinch a place in the last eight of the BetVictor Scottish Open.

It’s the first time McGill has beaten Selby since inflicting the Crucible curse at the 2015 World Championship and ending the Leicester cueman’s first reign as World Champion.

This evening’s win has a similar significance in that it ends defending champion Selby’s winning streak at the Scottish Open. It is the first time he has lost in the event, having lifted the Stephen Hendry Trophy for the previous two years. His run of match wins ends at 17.

McGill will now face an intriguing all-Scottish tie with practice partner Stephen Maguire, who defeated Ben Woollaston 4-1. McGill is chasing a third ranking title and a first since winning the Shoot Out in 2017.

After taking the opening frame, McGill then stole the second on the black to give himself an early cushion. He then composed a clearance of 75 to also take the third on the black and establish a 3-0 lead.

However, Selby refused to relinquish his crown without a fight. He fired in breaks of 105, 116 and 79 to take three on the bounce and set up a decider at 3-3.

It was a truncated final frame, which lasted 38 minutes. However, McGill eventually came out on top and sealed his progression to the quarter-finals.

“I played alright, but I think I picked off a couple of his errors to go 3-0 up. All of a sudden, in the blink of an eye, it was 3-3. He played really well. If he’d have come back and beat me I’d have had no complaints,” said 30-year-old McGill.

“I am in a decent place right now mentally, where I don’t really care what is happening. I am just trying my best every shot, regardless of what is going on. I can even take the defeats a bit better now.” 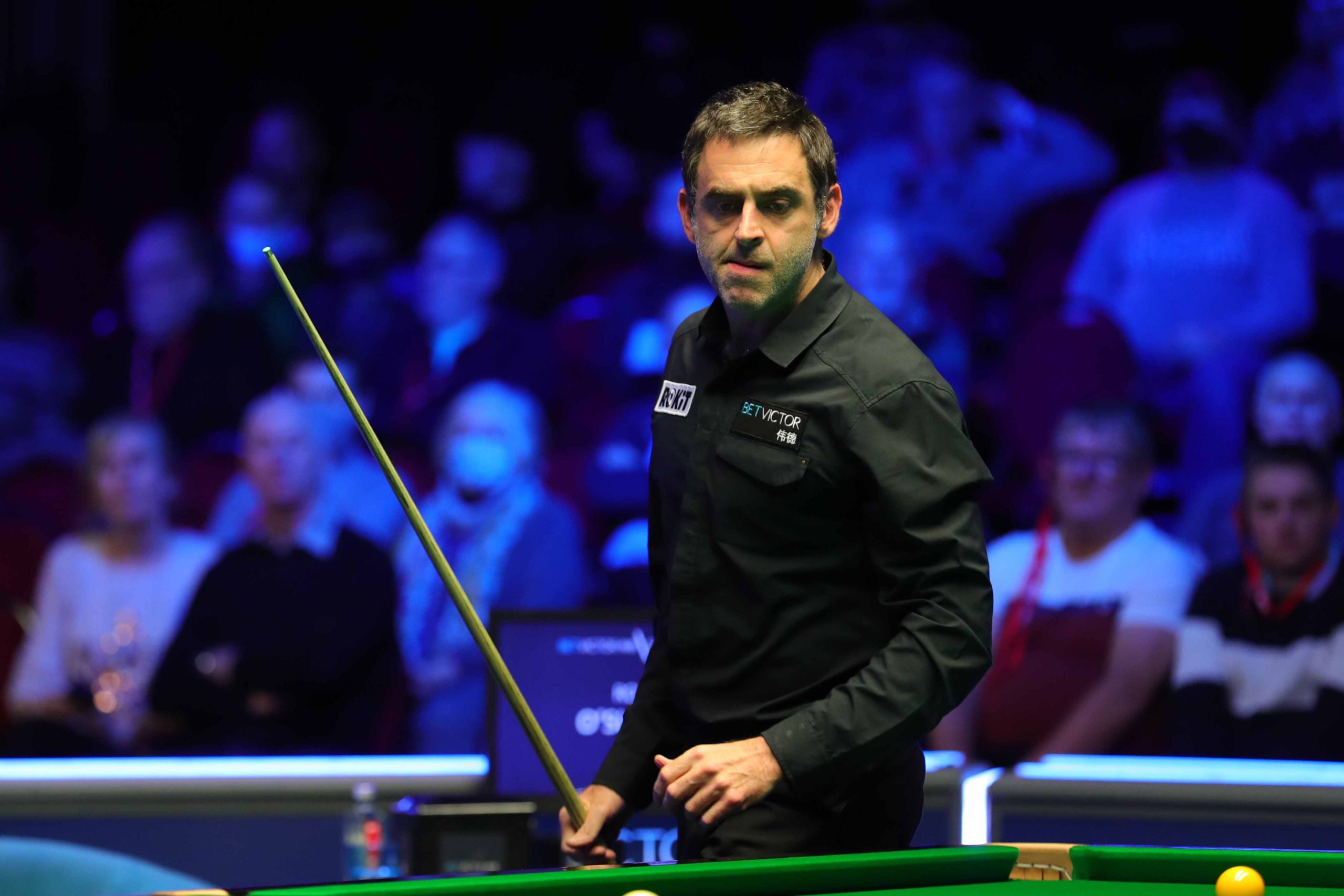