Here are the WST reports on what happened on day 4 in Coventry other than Ronnie’s win over Hossein Vafaei which I covered here.

Jack Lisowski admitted he “totally lost concentration” at a key moment as he let slip a 3-1 lead and lost 4-3 to Stephen Maguire in the second round of the Cazoo World Grand Prix in Coventry.

Glasgow’s Maguire goes through to the quarter-finals of the £380,000 event and will face Stuart Bingham on Friday afternoon. World number 11 Maguire is chasing his first title since the 2020 Tour Championship. 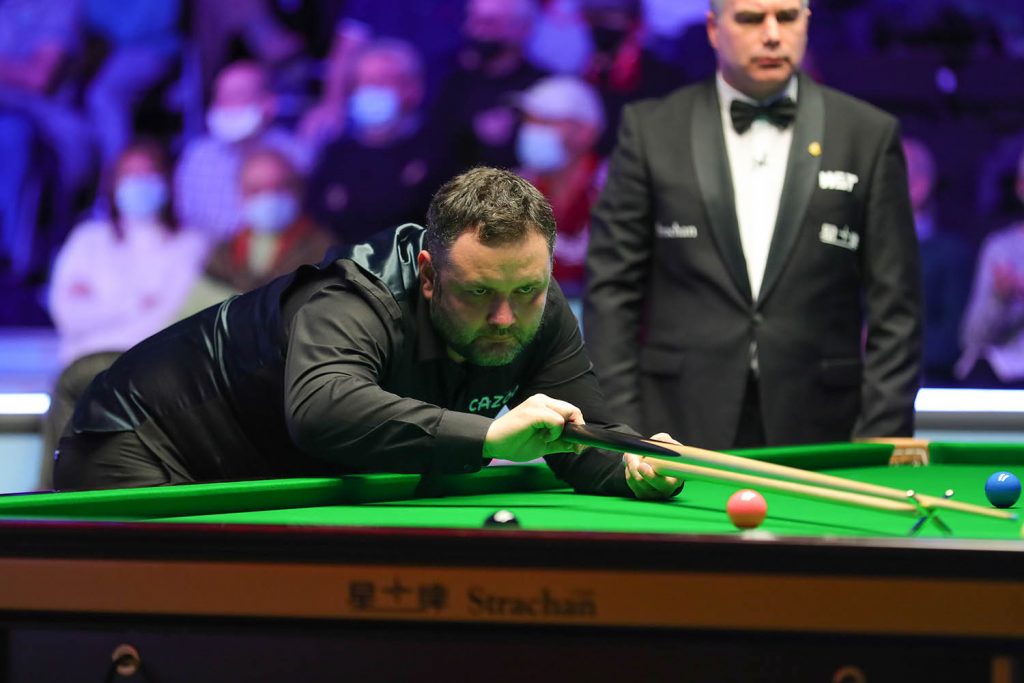 Lisowski built a 3-1 lead today with a top break of 128 and looked to be cruising to the winning line in frame five until he missed the black off its spot at 47-0. Maguire stole that frame with a fine 54 clearance and added the next with a 57 for 3-3.

Early in the decider both player missed chances, Lisowski failing on a tricky thin cut on the yellow to a top corner. The Englishman later played a loose safety, which let Maguire in for a match-winning 77.

“Jack will be devastated, he should have put me to bed 4-1, I wasn’t in the game at all,” said Maguire, through to his second consecutive quarter-final having reached the last eight of the BetVictor Scottish Open. “The balls don’t forgive you in snooker if you don’t put the other guy away. When it went 3-2 I felt stronger and he fell apart.

“I have been struggling on the TV table, I think that’s the first match I have won on it this season. I gave away the first frame today which was pathetic, and I didn’t settle. But hopefully getting the win in the end will give me the chance to kick on.”

Lisowski said: “I missed that black at 3-1 and after that it was garbage. I totally lost my concentration which is typical of me, I have done it throughout my career. I fudged the chance and another one bites the dust. Finishing matches off should be the easy bit, but not for me. I have to figure out how to get these things tucked away.”

Former World and Masters champion Bingham came from 3-2 down to beat Ali Carter 4-3.

Not sure what happened in the Bingham v Carter match, but happy with the outcome.

Stephen Maguire always tells it as it is, I really appreciate his honesty. As for Jack Lisowski … what can I say? I like him, I like his game but he’s a fan’s worst nightmare.

Robertson To Face Selby In Semis

Neil Robertson converted a fantastic long pot on the final blue in the deciding frame to win an exciting battle with Yan Bingtao 5-4 in the quarter-finals of the Cazoo World Grand Prix.

In a meeting of two of snooker’s all-time greats, Robertson will face Mark Selby on Friday evening in the semi-finals at the Coventry Building Society Arena. Selby came through a Leicester derby against Tom Ford by a 5-2 scoreline as the World Champion continued his best run of the season so far. 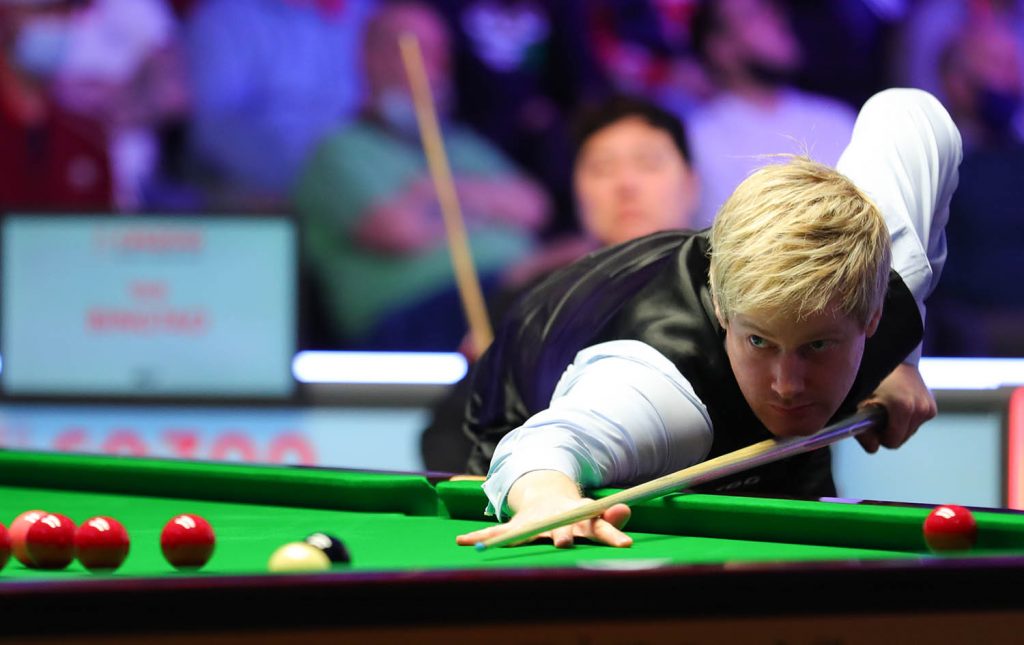 Australia’s Robertson landed this title in 2020 and is just two wins away from the £100,000 top prize, and his second title of the season having captured the BetVictor English Open.

His first six frames against Yan were shared 3-3, both players scoring heavily as Robertson made breaks of 72, 117 and 66 while China’s Yan replied with 54, 69, 59 and 87. Masters champion Yan edged ahead before Robertson got the better of frame eight for 4-4.

In the decider, Yan made 43 before missing a mid-range red to a top corner, and Robertson’s reply was on 59 when he left the last red in the jaws of other other top pocket while playing with the rest.  Yan’s attempted clearance ended when he ran out of position on the blue, which led to a long tactical exchange. When Robertson was left with a thin cut on the blue to a top corner from distance, he went for it full-blooded and found his target, before dropping the pink into a centre pocket.

“It was a super-thin cut on the blue, but I felt that having been so far behind in the last frame, it was definitely best to go for it, ” said the world number four. “It was virtually impossible to over-cut it so I almost aimed to over-cut it, and hit it perfectly. I’m glad I finished dead straight on the pink.

“Yan played a brilliant match and put me in so much trouble, he shows maturity beyond his years.  Probably the only thing he could improve would be consistently controlling the cue ball. Once he sorts that out he is going to be incredibly tough to stop. He has got so much patience and a beautiful cue action, he never looks like missing. I am always impressed when I watch him play. He has every chance of being a World Champion.

“Mark will have vengeance on his mind because I beat him a few times last season. I love playing him and he is a great friend off the table. I’ll go for my shots and see what happens.” 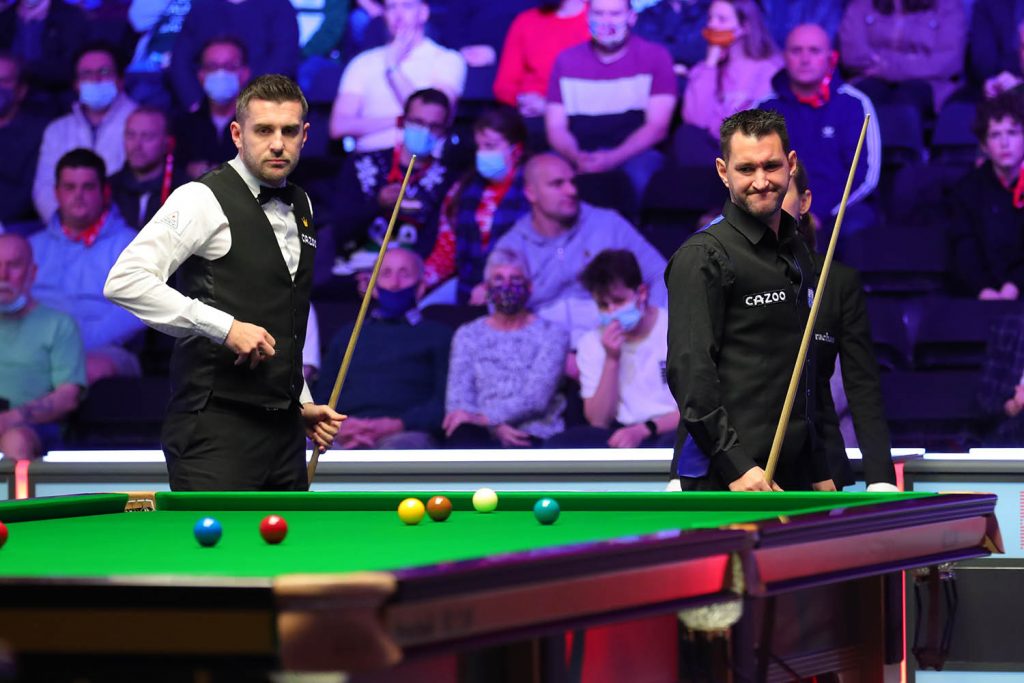 Selby came into this week short of confidence having failed to progress beyond the last 16 of any event this season, but his form has been much improved in wins over Barry Hawkins, Mark Allen and Ford.

After losing the opening frame, Selby took a 3-1 lead with runs of 58, 74 and 104. Frame five came down to the colours and Ford laid an excellent snooker on the brown, then cleared from the chance that followed to halve the gap.

The sixth lasted 50 minutes and went Selby’s way for 4-2, and the world number one soon rounded off the tie with a run of 93.

Neil and Yan served us a great match, the kind of match that makes you think “Shame there had to be a loser!”. Neil is fundamentally a nice and positive person and it shows in his post-matches. He is genuine in praising Yan there, and he is right too.