It’s of course this time of the year … “Best”, “Top” and “Highs” of about anything, as well as relevant statistics are everywhere whilst actual action stops for a while. It’s just part of the end of year tradition along with Christmas baubles, puddings, and carolls …

And so, true to tradition, WST has published its top 10 matches of the year:

As the year draws to a close, here’s a look back on the best matches of the past 12 months…

10. John Higgins 6-5 Ronnie O’Sullivan
BetVictor English Open semi-finals
One of two ‘El Clasico’ matches in this list between two snooker titans who have now clashed 72 times in careers stretching back 30 years. On this occasion in Milton Keynes, Higgins led 2-1 early on, making a break of 104 in frame two, before O’Sullivan took control, racing into a 5-3 lead with runs of 108 and 103. The Englishman had chances to win in the last three frames but couldn’t capitalise as Higgins recovered to 5-5. The decider came down to an exciting safety battle on the green, Higgins riding his luck as he escaped from one snooker and fluked one in return. He eventually potted green and brown for victory. “We were both gone in the last frame. It is a tough game when you are out there with the pressure on,” smiled the Scot.

The last ranking event match of the year proved a perfect way to round off 2021 for O’Sullivan’s legion of fans, who may have doubted his capacity to fight for success on the main stage.  The Rocket acquired an unwanted record last season when he lost five ranking finals, and hadn’t held silverware since the 2020 Betfred World Championship. And when he trailed 7-5 against a fierce competitor in Robertson, the losing streak looked likely to continue. What followed was a reminder of just how good O’Sullivan is when everything clicks – and a warning for his rivals that the old magic is still there. One break of 90 and three of 77 helped him win five of the last six frames. O’Sullivan said: “The difference in the atmosphere when I’m playing well is a different energy, and it’s nice to bring that energy to the people, to a venue and to a game.”

8. Luca Brecel 6-4 Kyren Wilson
Cazoo UK Championship semi-finals
Many top seeds went out early in York and the semi-finals featured four players who had never been that far in this event. Brecel got to the semis by relying heavily on his much-improved safety game, in fact he made only one century in his first five matches. But against Wilson he showed the flair and fluency for which he is renowned. The match started with three centuries, runs of 130 and 105 from Brecel either side of a 121 from Wilson. World number five Wilson, who must have gone into the match feeling this was his chance for a Triple Crown breakthrough, edged 3-2 ahead, but there was little he could do from that point. Brecel’s scoring barrage, breaks of 102, 97, 80 and 112, saw him fly past the winning post, rounding off the match with a series of crowd-pleasing exhibition shots. “It feels like the best I have played because of the stage of the tournament,” said the Belgian. “When I potted a red on 67 I cried a little bit, it was very emotional.”

7. John Higgins 6-0 Mark Selby
Cazoo Players Championship quarter-finals
After everything Higgins has achieved in snooker, for him to describe the 2021 Players Championship as the best he has ever played over a tournament was quite a claim – but nobody in Milton Keynes was arguing. In terms of quality of performance, any of his four matches could have made this list – including his 10-3 dismantling of Ronnie O’Sullivan in the final – but his second round whitewash of Selby was the ultimate demonstration of matchplay. Frozen out of every frame, Selby scored just seven points, the lowest ever tally in any best-of-11 professional match. “It’s the best I have ever played or ever felt,” said Higgins, whose top break was 100. O’Sullivan summed it up best when he said: “I watched it. It was ridiculous. I couldn’t watch it in the end. It was granite. It was evil.”

6. Neil Robertson 9-8 John Higgins
BetVictor English Open final
Heartbreak for Higgins as he lost a second consecutive final by a 9-8 scoreline, having led 8-6 on each occasion. Robertson was the stronger player in the early stages, making breaks of 140 and 123 to lead 5-3, then Higgins gradually gained momentum during the evening session as he went 8-6 ahead, only for Robertson to fire runs of 52 and 120 to set up the decider. Higgins had first real chance but made only 22 before over-cutting a tricky red to a top corner. Robertson clipped a red into the same pocket, rolled in a tough yellow to centre, and went on to make a title-winning 65. Robertson’s delight came from providing a great spectacle for a capacity crowd. “There will have been a lot of people in that crowd tonight that will have had it really tough over the last 18 months,” he said. “I was so happy to see so many people cheering and really enjoying themselves. That is the real thing to take away from this.”

5. John Higgins 6-3 Ronnie O’Sullivan
Betfred Masters quarter-finals
The pair met six times in 2021, Higgins coming out on top in five of those, and this was the pick of the bunch – an absolute humdinger of a tie at snooker’s biggest invitation event. O’Sullivan opened with a break of 97, Higgins levelled at 1-1, then the real fireworks were launched. Between them, the duo made a record-equalling five consecutive century breaks, O’Sullivan compiling 125 and 103 while Higgins knocked in 145, 110 and 134 – and the Scot could have made it six in a row but broke down on 88 in the next. That was enough to give him a 5-3 lead and he sealed the result in the ninth frame. “We’ve been playing each other for nearly 30 years at the top end of the game and I’m proud that I’m still competing,” said Higgins. “There will be a time sooner rather than later when we won’t be playing these games, so you have to enjoy them while you still can.” 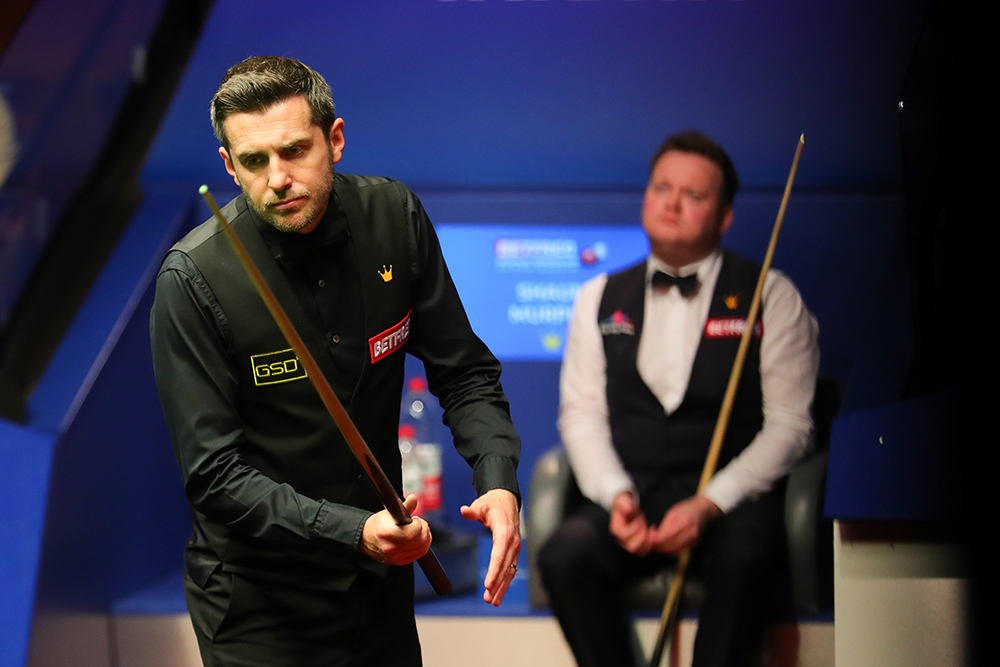 This match scores extra marks for sheer atmosphere and the significance of the occasion as it was the first British sporting event for over a year to welcome a full-capacity crowd. The enthusiasm of the fans at the start of the Monday afternoon session was a joyful experience for everyone present. Selby’s long potting and heavy scoring were features of the final, and when he made a 120 to lead 17-13 it looked like a stress-free finish for the Leicester cueman. Murphy had other ideas and gained the support of the crowd as he battled back with breaks of 100 and 110. He might have closed to 17-16 but, brave or reckless, went for a difficult pot on the last red along a side cushion and left it in the jaws. Selby’s cool clearance was followed by a roar of elation with his fourth world crown secured. “Life has been very difficult for everyone in the last 12 months,” said Murphy. “I want to say a very deep personal thank you to everyone who has bought a ticket and come here over the last 17 days. Sport is nothing without the fans.”

3. Anthony McGill 13-12 Ronnie O’Sullivan
Betfred World Championship second round
Much like Barry Hawkins and Graeme Dott, McGill has a range of attributes which make his game particularly suited to the Crucible: composure, patience, intelligent shot selection and calmness under pressure. He had already beaten the likes of Mark Selby, Shaun Murphy and Stephen Maguire over the long distance in Sheffield, and added O’Sullivan to his list of scalps with a hugely impressive display last season. In a high quality contest which featured five centuries and 14 more breaks over 50, O’Sullivan led 4-1 early on, then fell 10-5 behind, before rallying to lead 12-11. In a tense finish, McGill made a tremendous 136 to level at 12-12, then came from 42-0 down in the decider to make an 85 clearance. “It’s the best win of my career, no doubt about it,” said McGill. “Ronnie was really up for it. A few years ago I thought I was rubbish, but now I believe in myself to at least play well.”

2. Jordan Brown 9-8 Ronnie O’Sullivan
BetVictor Welsh Open final
During his eight year spell away from professional snooker, in which he worked in a petrol station, Brown must have dreamed regularly of this moment – beating the best player of all time in a fantastic final to win his first title. So it would be no surprise if he’s still pinching himself to make sure it really happened, ten months after his great moment. The Northern Irishman had never previously been beyond the quarter-finals of a ranking event, but went on an extraordinary run at Celtic Manor, knocking out the likes of Mark Selby and Stephen Maguire.  The final was close all the way through and O’Sullivan looked likely to ride the storm when he made a break of 119 to level at 8-8, but it was Brown, a 750-1 shot with the bookies before the event started, who stayed cool in the decider with a run of 74. “It is unbelievable,” he said. “To beat the greatest player of all time in a major final. It was an honour just to play him. But my strategy was to focus on my own game rather than trying to play Ronnie, and it worked.” His reward was a cheque for £70,000 – that’s a lot of hours of selling Mars bars and anti-freeze. 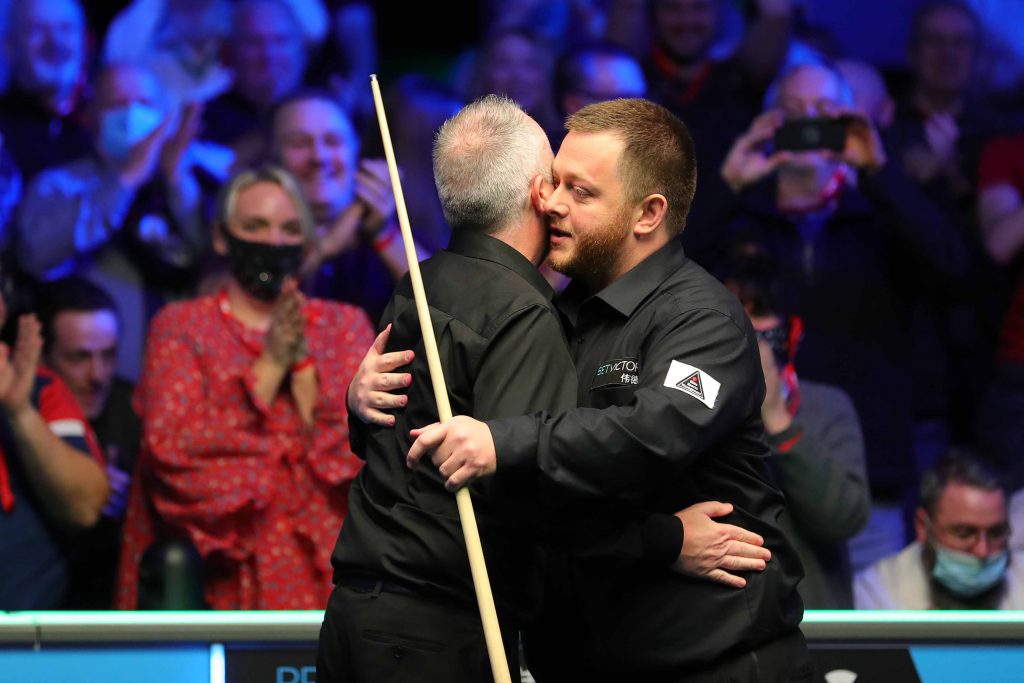 Another moment of glory for a Northern Irishman, and this one just edges Allen ahead of Brown at the top of our list because of the presence of a capacity crowd at the marvellous Waterfront Hall – another occasion, like the Crucible final, which reminded us just how much snooker needs fans. Perhaps only a Masters match featuring Ronnie O’Sullivan or Jimmy White has generated such vociferous and partisan support, as the Belfast brigade cheered on their man. And after a year in which Allen’s problems away from snooker have been well documented, this was his chance to focus on the green baize and show what he does best. The match itself was a classic, with two centuries and ten more breaks over 50. Runs of 64 and 136 put Higgins 8-6 ahead, then Allen fought back to take the next two as the excitement in the arena reached fever pitch. Both players had chances in a thrilling decider but Allen’s break of 38 got him over the line. “The buzz towards the end there on the last few balls, I wasn’t even sure if I’d be able to stand up and pot them,” he said. “The roar from the crowd on every shot of that clearance was something I’ve never ever experienced in my life and maybe never will again. It spurred me on. That is why you play the sport. You want to play the very best on the biggest occasions.”

Here’s hoping for many more great matches in 2022….starting at the Cazoo Masters in January

Of course, there is no definite, scientific way to define “the best”. It can be about many things, and indeed different things for different persons. It can be about the quality of the snooker played, the context and importance of the match, the record(s) broken, the “tale of the unexpected” factor, the involvemenent and reactions of the fans…

So here is my “top three”, and why I chose those three…