Both were far from their best during the first session; it finished on a 5-3 score in Neil’s favour. As I expected, Neil came back stronger in the evening, but Barry was unable to raise his game significantly, despite or, maybe, because having most of the crowd on his side. Neil has been there a lot, Barry not so much. Quite simply Barry didn’t score enough.

Australia’s Neil Robertson landed his second Cazoo Masters crown, ten years after his first, with a 10-4 defeat of Barry Hawkins in the final at Alexandra Palace.

The Melbourne cueman beat Shaun Murphy 10-6 in the 2012 title match, but was runner-up to Mark Selby the following year. His most recent appearance in the final was in 2015, again up against Murphy, when he fell to a heavy 10-2 defeat. Today’s victory ends his decade long wait for Alexandra Palace glory.

Robertson had an impressive path to lifting the Paul Hunter Trophy and securing the £250,000 top prize. After a 6-3 defeat of Anthony McGill in the opening round, he scored a 6-4 win over O’Sullivan. He then secured a thrilling 6-5 defeat of Williams in the semi-finals, where he came back from requiring two snookers in the decider.

Hawkins will be disappointed to succumb to another defeat in a Masters final. He lost out 10-1 against O’Sullivan in 2016. The three-time ranking event winner leaves with the consolation of a £100,000 runner-up prize. He enjoyed a superb week, defeating Murphy, Selby and Judd Trump en route to today’s showpiece showdown with Robertson.

World number four Robertson kept pressing forward when the concluding session got underway and moved three ahead at 6-3, with the help of a 50 break.

The Hawk clawed his way back within two when he composed a break of 69 to make it 6-4. However, that would prove to be his final frame of the evening.

Robertson surged for the finish line and crafted breaks of 68 and 114 on his way to four frames on the bounce, which secured him the 10-4 win and his second taste of Masters glory.

“I’m so happy to win this wonderful title again. I had my first win after Alexander was born at this event back in 2012. I always wanted to do a repeat with Penelope here as well, so I’m happy to do that,” said 39-year-old Robertson.

“Barry was the underdog tonight and I felt like I was the villain spoiling the fairytale at some points. He is such a wonderful player. He really deserves to win one of the big titles. I had to stay focussed with the job at hand. I knew that the majority of the crowd were with him. Luckily with my experience I knew how to silence that a little bit, play well and get a good lead.

“When I won my first title I thought I’d be able to go back to Australia happy. Who’d have thought I’d still be living here 16 years later. I think a lot of things have happened since Barry Hearn took over and gave us more opportunities to play. He has been a massive part of allowing myself and all of the great players in the game to win as much as we have.

“So many people have said they’ve never seen anything like my deciding frame with Mark Williams in sport, let alone snooker. I was absolutely dead and buried and all of a sudden it was like a phoenix rising from the ashes.” 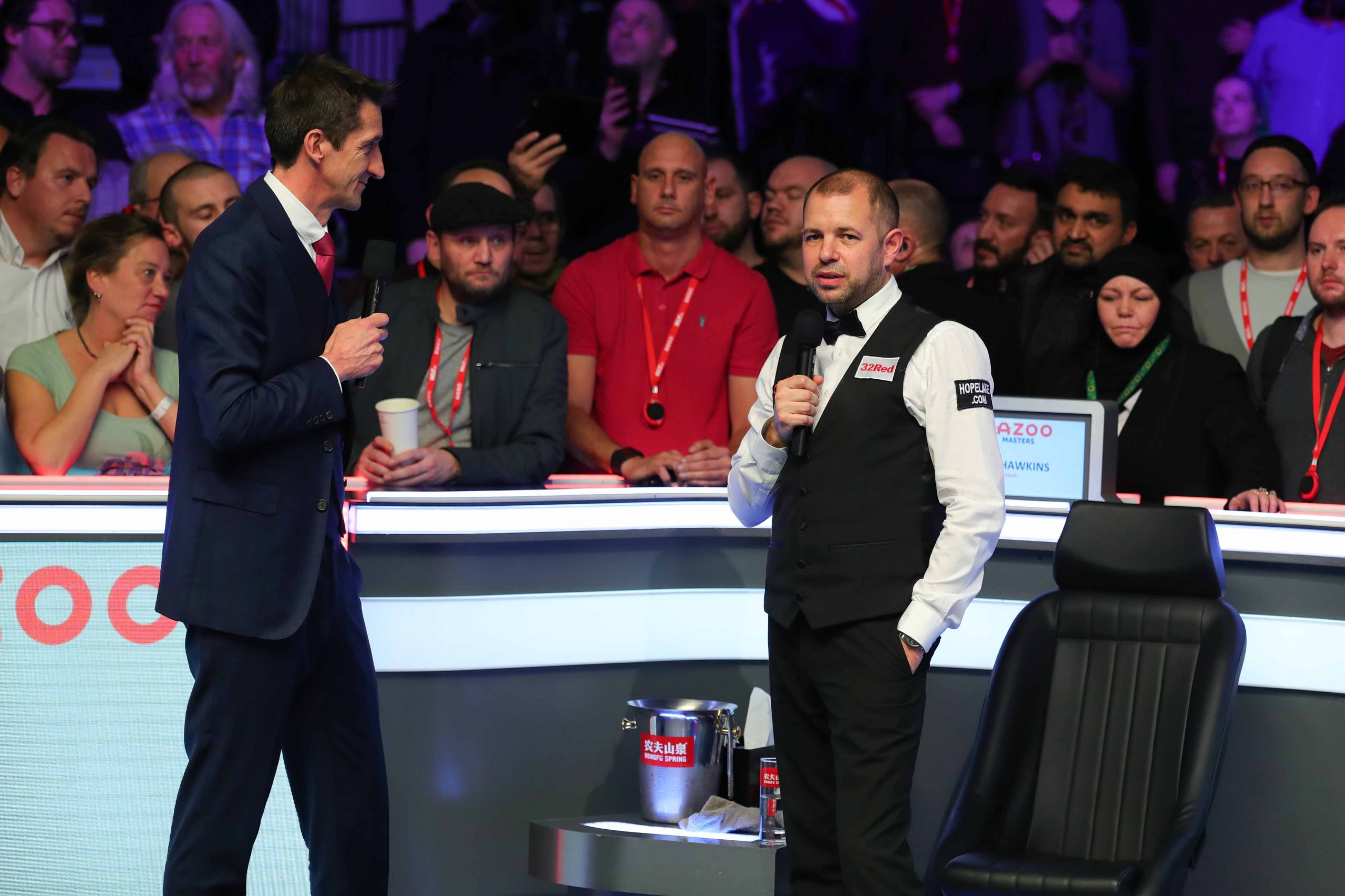 Hawkins said: “It’s a bit disappointing. I expected to go out there and play well. I was over the moon to be 5-3 down after this afternoon. I felt better tonight, but Neil played stronger. I just made too many mistakes overall. Neil is a fantastic player and a fantastic cueist. You just can’t do that at this level.

“This has been one of the best weeks of my life. The atmosphere at every match has been phenomenal. There aren’t many snooker players that will have experienced that. I am going to remember all of those cheers and they will stay with me for a while.”

It’s typical of Neil’s fundamentally kind disposition to feel sorry for his opponent, but that doesn’t stop him trying his hardest to win.

This Masters was one of the best events I ever watched in snooker and it’s been largely thanks to the London crowd.

There were suggestions that, maybe, the World Championship should move to Alexandra Palace. As a playing venue, it would be suitable, it could even accomodate the qualifiers probably. But there aren’t that many hotels or restaurants nearby, it’s outside of the city, and public transport to and from the place isn’t fantastic, especially in late evening.

Here are Ronnie and Jimmy thoughts about the idea:

“Do they have the facilities here?” Jimmy White said on Eurosport of the Alexandra Palace. “There’s not many hotels, but the actual playing conditions when it gets to a one-table situation… The Crucible has two tables and you could probably do it here, it is big enough also to have the qualifiers and all the matches.

Ronnie O’Sullivan and Jimmy White feel the World Championship should remain at the Crucible in Sheffield.

The Masters is taking place at Alexandra Palace this week, and the amazing atmosphere has led to calls for snooker’s flagship event to be moved to the capital.

Judd Trump said following his win over Kyren Wilson, admittedly in the heat of the moment, that he would like all tournaments to be played at Alexandra Palace.

Other players have floated the idea of the World Championship moving to north London, but O’Sullivan and White are not convinced.

“Do they have the facilities here?” White said on Eurosport. “There’s not many hotels, but the actual playing conditions when it gets to a one-table situation… The Crucible has two tables and you could probably do it here, it is big enough also to have the qualifiers and all the matches.

“I’d like to see it stay at Sheffield as it made snooker, but when that contract comes up it might move to somewhere like the Ally Pally.”

O’Sullivan echoed White’s sentiment, despite suggesting a move to Alexandra Palace would benefit him personally.

“It is a great venue, but I am like Jimmy, Sheffield and the Crucible is a special tournament,” O’Sullivan said.

“You’d have to look at the facilities, the hotels, getting in and out, would it be suitable for the players? Probably not.

“I only live 20 minutes up the road so it is probably ideal for me, but as a tournament as a whole I think Sheffield is a great place to host the World championship.”