The “big” talking point at the 2022 Welsh Open was Mark William’s exit. The Welsh take great pride in their players and, remarkably, Mark is the only Welsh player to ever win the Welsh Open but he will not win it this time as he lost to Kurt Maflin yesterday.

Michael White, who is currently an amateur, is the only Welsh player who is through to the last 32 so far. Of course the last 64 round continues today. 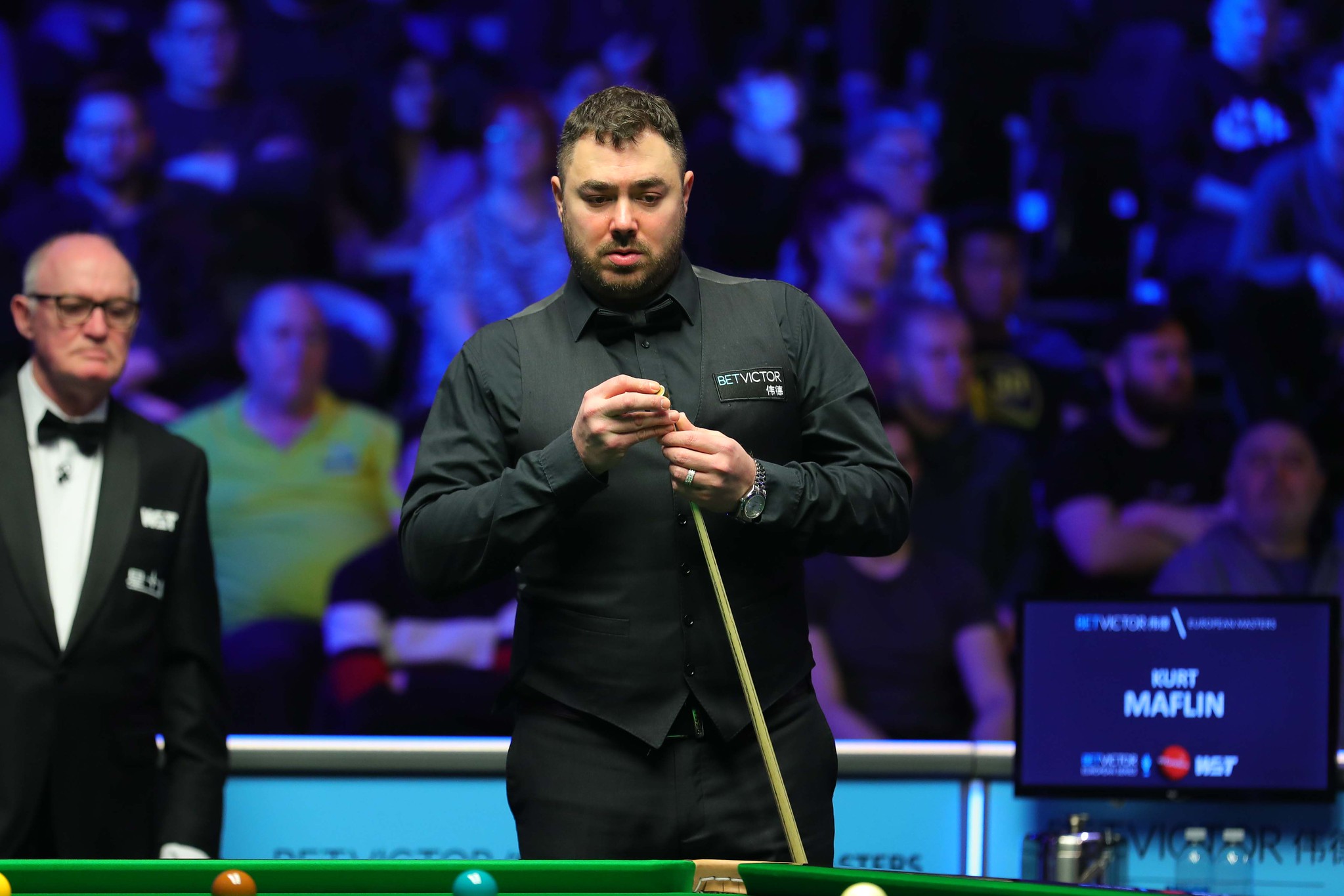 Norway’s Maflin has enjoyed an upturn in his form in recent weeks, having had a difficult start to the campaign. He beat 2019 World Champion Judd Trump on a run to the last 16 of last week’s BetVictor European Masters and has added the scalp of three-time Crucible king Williams this afternoon.

Williams won the most recent of his two Welsh Open titles back in 1999, when he defeated Stephen Hendry 9-8 in the final. That was the last time a Welshman was victorious in the event. However, five players from Wales still remain in the hunt to put that right this week.

They shared the opening two frames this afternoon, before runs of 60 and 57 saw Maflin move one from victory at 3-1. Williams claimed the next two frames and set up a decider. However, it was Maflin who fired in a superb run of 74 to seal the win. He faces Scott Donaldson next.

“I missed a couple of chances, Mark clawed himself back and you probably would have made him favourite for the last frame,” said 38-year-old Maflin. “I am really pleased with the decider. It was a tough shot to the middle from the baulk cushion, but after that the balls were sitting really nicely for me.

“It is always good to beat players like Mark and Judd, especially on the big stage. He didn’t play his best today and I didn’t either. It was solid match snooker and it gives me a lot of confidence going forward.”

The four-time World Champion fired in breaks over 50 in four consecutive frames to beat Pang Junxu 4-1 in round one. Today he extended that streak to eight frames in a row with runs of 102, 70, 110 and 60.

Higgins remains in joint first place alongside Mark Allen in the BetVictor European Series, which sees the player that accumulates most money over the qualifying events scoop a £150,000 bonus.

Next up Higgins faces a mouth watering last 32 clash with Ali Carter. Glasgow’s Higgins is seeking a sixth Welsh Open title this week, his five wins so far are already a record in the event.

Higgins said: “I don’t think I really have any other records in the sport. This is a good one and to add to it would be amazing. I’ve always had a great record in Wales and loved coming here. The crowds are always really good and this is a great venue.

“The fact Ali isn’t in the world’s top 16 shows the standard of snooker at the moment. In any other era he would be in the top eight. It shows you how tough the game is and how many talented players there are out there.”

BetVictor Northern Ireland Open winner Allen progressed with a 4-0 win over Iulian Boiko, while BetVictor English Open winner Neil Robertson kept himself in the hunt for the bonus with a 4-1 defeat of Hammad Miah.

Ronnie O’Sullivan put on a clinical display to see off James Cahill 4-0. The Rocket fired in breaks of 83 and 90 on his way to the win. He faces Germany’s Lukas Kleckers up next.

Judd Trump ended with back-to-back centuries to see off Craig Steadman 4-1. He composed breaks of 108 and 120 to get over the line and now faces Si Jiahui.

Ronnie played OK, he applied himself but still looked flat and tired. There was no spark.

Here is the end of the match:

He also didn’t appear to be in a particularly cheerful mood. That state of mind probably explains what he said in his post-match interview:

Ronnie O’Sullivan says he would ‘100 per cent’ miss the World Snooker Championship if he received a ‘better offer’ from elsewhere.

The Rocket has been busy on the World Snooker Tour this season, playing in almost every tournament available to him except the likes of the Shoot Out and the early season British Open.

The six-time world champion reached the final of the European Masters on Sunday and was back in action on Tuesday afternoon in the first round of the Welsh Open, dismissing James Cahill 4-0 in short order.

However, he insists snooker remains just a hobby for him, and if he was approached with a more attractive proposal he would be happy to skip a trip to the Crucible this year.

‘At the moment I play when I want, don’t play when I don’t want to play, and it’s great. It works for me, I wouldn’t be able to do it any other way.

‘It’s more of a hobby, but a serious hobby.’

Pushed on whether he would really forego the World Championship, Ronnie said: ‘100 per cent. I’m just all about business now and that’s how it’s been the last seven or eight years.

‘No matter what it is I look at it as a proposal. Is it something I want to do? And make a decision on it. That’s the best way for me to do it and I’m having much more fun doing it that way.

‘I make a decision on each tournament, on each proposal. My time is very, very valuable and I want to feel valued for my time.

‘For the last seven or eight years it’s worked really well and that’s probably why I’m still playing, otherwise I’d probably have hung my cue up.’

O’Sullivan has played at every edition of the World Championship since he made his debut in Sheffield in 1993.

He has skipped every other event on the circuit, but has never missed a trip to the Crucible, famously taking the whole 2012/13 season off before returning to defend his world title at its climax.

O’Sullivan’s win over Cahill sets up a last 64 clash with Luks Kleckers on Wednesday afternoon.

No panic! There is nothing really new in there, nothing suggesting that such “proposal” actually exists. Also, which tournaments Ronnie enters is discussed with his sponsors and, unless something really big is on offer, I can’t see them easily accepting that he would skip the World Championship.

To me, this simply is a reflection of his current mood, and, maybe in a weird way, a sign that he actually cares more than he is ready to admit. I strongly believe that last Sunday’s defeat did hurt badly, still hurts and that showed through this rather dispirited mindset.

As mentioned, today he will face Lukas Kleckers, and he will be favourite to progress. Should he win, Ding is waiting in the last 32.