The second round – last 16 – continued at the Crucible yesterday. Two members of the “Class of 92” were in action – Willo and Ronnie – and both produced outstanding performances on the day … but it was a pigeon who stole the show!

Mark Williams equalled the record for the most century breaks in a best-of-25 match at the Betfred World Championship, firing six tons as he crushed close friend Jackson Page 13-3 to book a place in the quarter-finals.

Williams closed out the match with a session to spare as he showed no mercy to an opponent he describes as like a “fourth son.” Having appeared at the Crucible 24 times and lifted the trophy on three occasions, this was among Williams’ best ever performances at the Theatre of Dreams. The 47-year-old is clearly a strong contender for the title this year as he looks ahead to a match with Mark Selby or Yan Bingtao on Tuesday or Wednesday.

Selby is the only player to have previously made six centuries in a 25-frame match, back in 2011 when he beat Stephen Hendry 13-4 in the second round. World number eight Williams has now made ten tons in two matches and if he goes all the way to the final then the record of 16 in a single Championship, set by Hendry in 2002, is under threat.

“I don’t think I can play any better than that at my age,” admitted Williams, who won the title in 2000, 2003 and 2018 and is into the quarter-finals for the 11th time. “Lee Walker has been doing a bit of work to my game, picking it apart and putting it back together again. Players these days don’t just roll the ball, they punch it. We’ve been trying a few different things with my technique including hitting the ball a bit harder and making more breaks.

“Us older players have got to adapt our games in order to keep up with the younger ones. I know I’m going to fall down the rankings eventually, so I’m doing all I can to ensure I can stay up the top for as long as possible. I knew coming here that I got a chance at the title because I’ve played well for most of the season.” 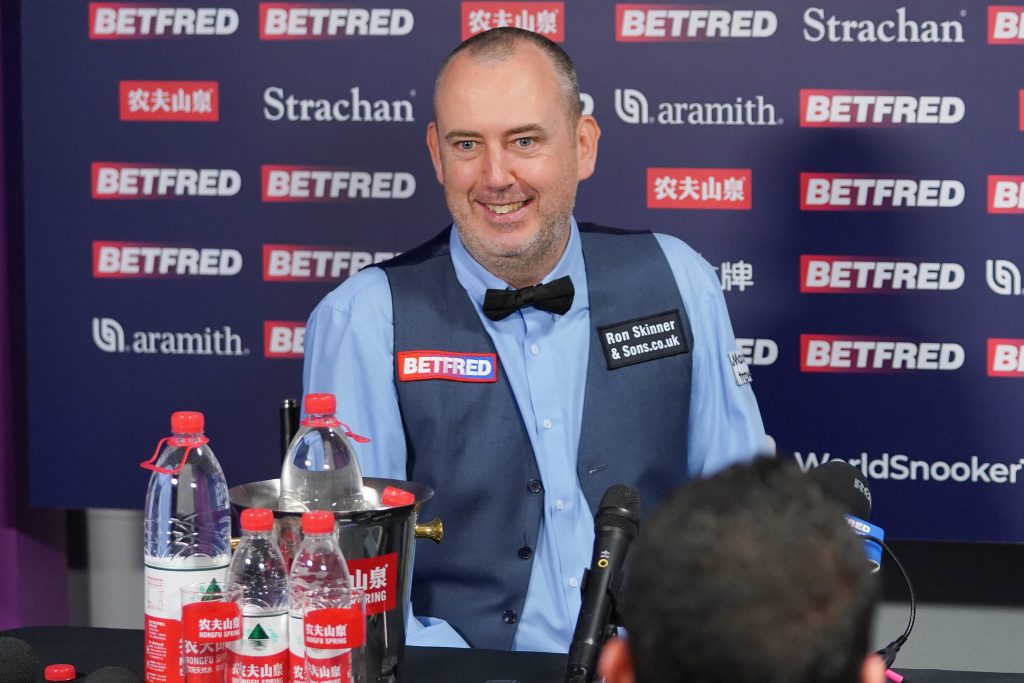 Williams led 7-1 overnight having made breaks of 125, 100 and 121 in the first session. Any hopes Page may have had of a fight-back this morning were quickly doused when his opponent made a 110 in the opening frame. Crucible debutant Page looked set to pull one back in frame ten but failed to get position on the last red, on a break of 69. After a safety exchange, he overcut a tricky pot on the red to a baulk corner, handing Williams the chance to make a superb clearance and go 9-1 in front.

Two runs of 65 extended that advantage, before Page pulled one back with a 47 in frame 12. Back to back centuries, 117 and 127, equalled the centuries record as Williams went 12-2 ahead. Page made a 63 in frame 15 to raise his hopes of taking the contest to a concluding session this evening, but Williams then wrapped up the result in the 16th with a 56.

“It’s a difficult one for me, beating Jackson with a session to spare,” added Williams, who won the British Open earlier this season. “But I played well and kept him under pressure for the vast majority of the match. I was in the same position last year, losing to Selby with a session to spare. It’s a learning curve and it’s all about how you can bounce back from it.

“I wanted to go out there and destroy him, like I do with everyone else I play. I feel a little bit disappointed for him because he wanted to have a better performance than that. I didn’t give him many chances. I don’t think he’ll be too disheartened by it.”

World number 90 Page, who won four qualifying matches before beating Barry Hawkins in the last 32, said: “It started off in the first session, he was unbelievable, and it just set the tone of the match really. It takes the very best in the game to even compete with that, he was just ridiculous. I don’t think I have seen a performance like that since John Higgins won the Players Championship last season.

“It has been an unbelievable experience for me. I started three weeks ago at the qualifiers in round one so to get through and win a game here has been fantastic and I can take the positives from it.” 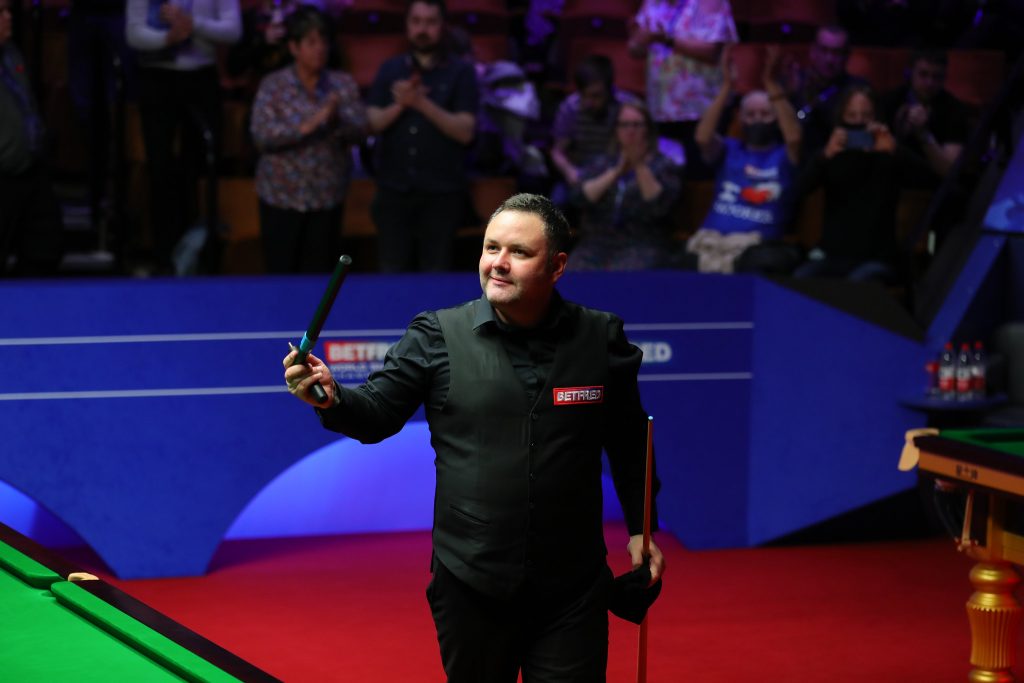 Stephen Maguire is just two frames away from a place in the quarter-finals of the Betfred World Championship having taken an 11-5 lead over Zhao Xintong.

There was a brief interruption towards the end of the session when a pigeon flew into the Crucible and landed on the table where Mark Selby was up against Yan Bingtao. The bird – which fortunately did not feather the cue ball –  was ushered out of the arena, caught and safely released outside without being harmed.

Maguire started the day 5-3 up on China’s Zhao and took six of the eight frames to close in on a match with Ronnie O’Sullivan or Mark Allen. The Scot had to come through qualifying to reach the Crucible, having slipped to 40th in the world rankings, but is now on the brink of his first quarter-final appearance since 2019.

China’s Zhao lost the opening frame today but hit back in the next when he got the snooker he needed on the final pink with an excellent shot to trap his opponent behind the black, then converted a thumping long pot on the pink and added the black.

But Cazoo UK Champion Zhao then lost his rhythm and made several unforced mistakes as Maguire pulled away. Breaks of 64 and 82 put the Glaswegian 8-4 ahead at the interval. Zhao pulled one back with a run of 72, but Maguire dominated frame 14 then won the 15th with a break of 61.

In the last frame of the session, Zhao led 42-12 when he missed a straight-forward pot on the third-last red to a top corner. Maguire punished him with a 44 clearance to extend his advantage. They return at 10am on Saturday with first to 13 to reach the last eight.

On the other table, defending champion Selby came from 4-2 down to level at 4-4 against Yan. China’s Yan is aiming to reach the quarter-finals for the first time, while world number two Selby is looking to continue his quest for a fifth world title.

Selby took the opening frame with a break of 54 and he led 67-0 in the second, but Yan clawed his way back and took it with a 38 clearance. Former Masters champion Yan made a 104 in frame three and took the fourth on the colours to lead 3-1.

After the interval, Selby pulled one back, but a fine 36 clearance from his opponent made it 4-2. Leicester’s Selby battled to win a scrappy seventh frame, and finished the session with his highest break of the day, 83, to draw level. They return on Saturday at 10am for eight more frames. Mark Williams awaits in the next round.

Zhao was unable to reproduce the form he had shown in the first round and Stephen Maguire is a top player with bags of experience. He needs only two frames today to get through to the quarter-finals where he is likely to face Ronnie who currently leads Mark Allen by 12-4.

The Selby v Yan match was a hard-fought tactical affair. Yan dominated the first part of the match, but, as was to be expected, Selby rallied and restored parity.

Here is the pigeon incident… the bird was rescued by Chris Barnes, one of the fitters. The whole story triggered a pun-fest on social media!

My account and comments on the Ronnie Allen match can be found here.