Robertson Named Player Of The Year 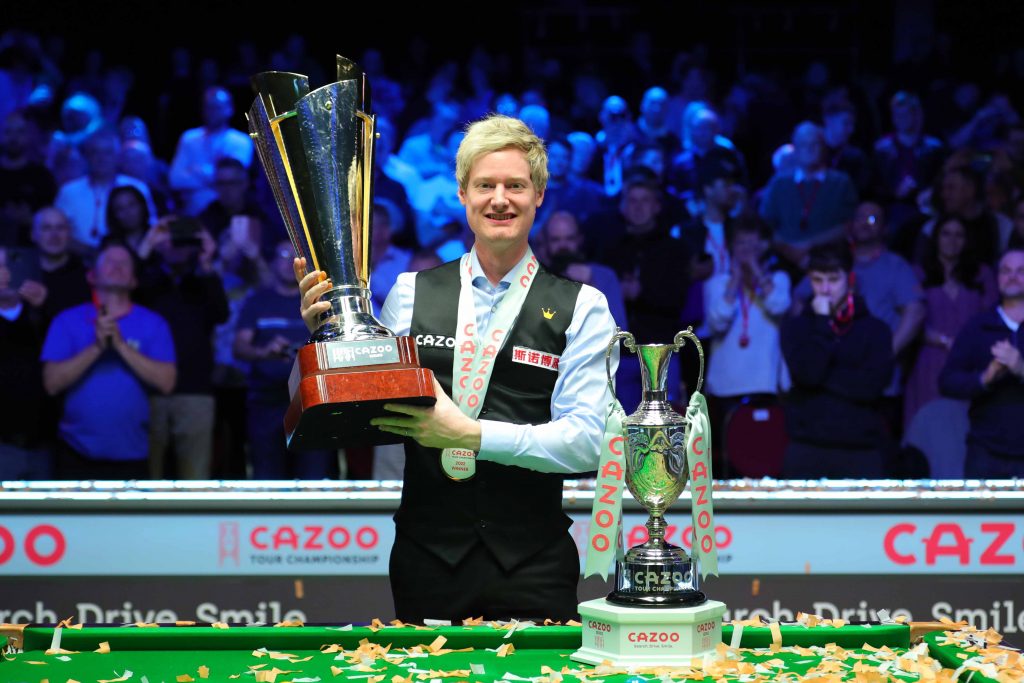 Neil Robertson has been named WST’s Player of the Year for the first time, after winning four tournaments during the 2021/22 season.

Australia’s Robertson lifted the trophy at the English Open, the Masters, Players Championship and the Tour Championship during the most prolific season of his career. He was knocked out in the second round of the World Championship but had the consolation of making a 147 at the Crucible.

O’Sullivan also won the Performance of the Year award for winning the World Championship for the seventh time, beating Judd Trump 18-13 in the final to equal the record of Crucible crowns set by Stephen Hendry.

The Fans’ Player of the Year award, voted by fans on the WST App and on social media platforms in China, went to Zhao Xintong. The Chinese ace landed his first ranking title at the UK Championship and went on to win the German Masters, climbing to number six in the world.

Magic Moment of the Year went to Robertson for his fantastic 147 during his World Championship match against Jack Lisowski as he became only the eighth player to make a maximum at the Crucible.

There are two new entries to the Snooker Hall of Fame, for the great players and administrators who have had a significant impact on our sport. They are:

Reanne Evans, the most successful ever player on the women’s tour, having won the World Championship a record 12 times.

Alison Fisher, who won the Women’s World Championship seven times in the 1980s and 1990s and played regularly in televised professional tournaments in that era.

Both Reanne and Alison have made outstanding contributions to the growth of snooker and we are delighted to welcome them into the Hall of Fame.

Congratulations to all laureates.

All in all, I agree with those awards.

I’m particularly happy to see Zhao getting the “Fans’ Player of the Year” accolade. Of course, this particular vote is held before  the World Championship, but it’s a recognition of Zhao’s achievements and bright personality. He’s young, he’s a breath of fresh air, he’s good looking, talented and dedicated. He plays attacking snooker. What’s not to like?

The “Class of 92” certainly deserves a collective award of sorts. I’m not sure how to name it. “Longevity award”? Not sure. Think about this though: all three were born in 1975, all three turned pro 30 years ago, all three won at least one event this season, all three are still in the top 8 of the rankings and all three reached the semi-finals of the World Championship. If this isn’t extraordinary, I don’t know what is.

The “Best match of the season” goes to the World Championship semi-final between Judd Trump and Mark Williams. Do I need to explain? It had everything. Mark’s calamitous start followed by a heroic but vain come-back, a tense decider,  high scoring from both, a clash of styles, a gap in generations…

The “Frame of the season” has to frame 22 in the Yan Bingtao v Mark Selby last 16 match at the Crucible. It was a fascinating 84 min 41 seconds affair – the longest frame ever at the Crucible so far. Yan Bingtao won it by 63-49, truly “out-selbying” Mark Selby himself.  And then he finished the match off with a 112 in the next frame!

Mark Selby for the brave and honest way he spoke about his mental health issues, came to defend his World title despite not feeling great and truly gave it his all.

Fan Zhengyi who arrived on the tour at 17 in 2018, the youngest professional at the time, who struggled terribly but decided to stay in the UK when covid-19  hit. He wanted to give himself a chance to earn another two years card via the Q-School, succeeded in that endeavour, and this year won his first ranking title, beating Ronnie in the final of the European Masters

Victoria Shi whose academy is home to so many promising young player.  She is a manager, a supporting presence, an advisor and, at times a mother figure. The successes of Zhao Xintong, Yan Bingtao, Fan Zhengyi, Ashley Huggil and more are testimony of the excellence of her academy.

One thought on “The 2022 Snooker Awards”