Andres Petrov will become the first Estonian Snooker Professional after he defeated Ben Mertens in the Men’s event final.

Here is the report by Michael Day:

Andres Petrov is set to become Estonia’s first-ever professional snooker player after he defeated Ben Mertens 5-3 in the final to win the 2022 EBSA European Amateur Snooker Championship held at the Delfin Resort in Shengjin, Albania.

The 25-year-old was runner-up in this event five years ago in Cyprus but the Tallinn cueist went one better this time around to secure the biggest title of his career and a two-year World Snooker Tour card.

Representatives from 35 different nations took part in the 31st staging of this prestigious event which has previously been won by players such as Mark Allen and Luca Brecel. 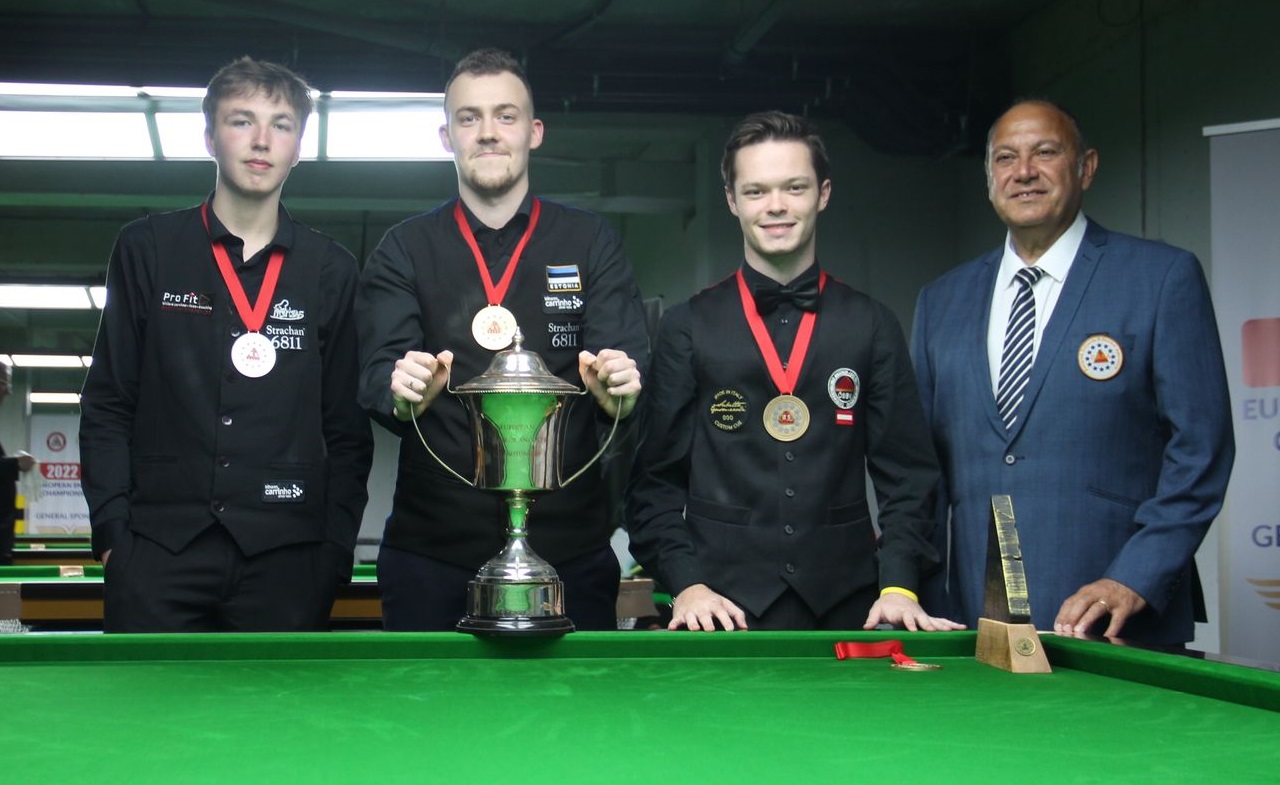 Reigning eight-time national champion Petrov qualified for the knockout phase after topping his round robin group with three wins from three, including a victory over recent European under-18 champion Liam Davies (Wales).

On the other side of the draw, Mertens – who was crowned European under-21 champion here last week – was attempting to create history by becoming the first player to claim both continental titles within the same year.

The 17-year-old Belgian nearly made a maximum 147 break in the groups stage – missing the 15th black on 113 – before defeating Ilia Chisleacov (Moldova) 4-0, David Cassidy (Republic of Ireland) 4-0, Robbie McGuigan (Northern Ireland) 4-2, and then ousting England’s Josh Thomond 4-3 to reach the last four.

A repeat of the under-21 title match last weekend, Mertens again faced Austrian youngster Florian Nuessle in the semi-finals, and would prove to be a thorn in his opponent’s side once more as he booked another final berth with a 4-3 victory.

Mertens chalked up the opening frame of the final with the help of a 53 break. Petrov took the next two, but Mertens did the same in frames four and five to move 3-2 ahead. However, the Estonian was not to be denied the championship again as he fashioned a three-frame winning streak to record a memorable triumph for Baltic snooker.

The Women’s event was won by Wendy Jans from Belgium. It’s ‘only” the 14th time that Wendy wins this event…

The Seniors event was won by Darren Morgan from Wales. Darren has “only” won it 12 times. Ha! Still some work to do to catch Wendy then !

Morgan gets his 12th Seniors crown!

Morgan and Brown were both awarded by EBSA with a nomination to take part in the World Games that will take place in America next July.

«Was very hard. I’m feeling very tired. It was very difficult», told as the aged 56 Welshman, after getting the cup and retaining the European title for a record 12th time. Almost unreal longevity in the sport.

A legendary legacy and astonishing benchmark. England’s Shaun Wilkes scored the top break in Seniors event, with 128 points, and got hiz prize too, as well as both semifinalists placed 3rd in the event, Malta’s Duncan Bezzina and Belgium’s Peter Bullen

Artemis Zizins from Latvia won the under-16 event.

Latvia’s Artemis Zizins is the 2022 EBSA European Snooker Championships U16 event winner and becomes the first continental champion at this age after claiming victory by 2 Frames to 1 facing Moldovian Vladislav Gradinari in the final match, played this Friday afternoon at Shengjin’s Delfin Resort.

Gradinari won the 1st frame but Zizins, after overcoming U18 champion Liam Davies at the semis, made quite a comeback and prevailed to win and earn The Peter Ebdon Trofhy. It takes Art to do it.

«I’m so happy! It’s a dream come true. I want to thank all, but especially my family for the support. It’s what I always want’», told the aged 16 Latvian new sport star to a large crowd at the Official Opening Ceremony of the event, in the hotel. The competition continues Saturday with the quarterfinals matches of the U21 event at Shengjin’s Delfin Resort.

Welshman Liam Davies performed with a 100 points break the best one in the U16 competition.

You will find all the results at http://www.ebsa.tv

The team events are still underway.