WST report on day 2 at the 2022 European Masters is short and mainly about Zhang Anda’s 147:

Zhang Anda made the first maximum break of his career during a 5-1 victory over Anton Kazakov in the BetVictor European Masters qualifying round. 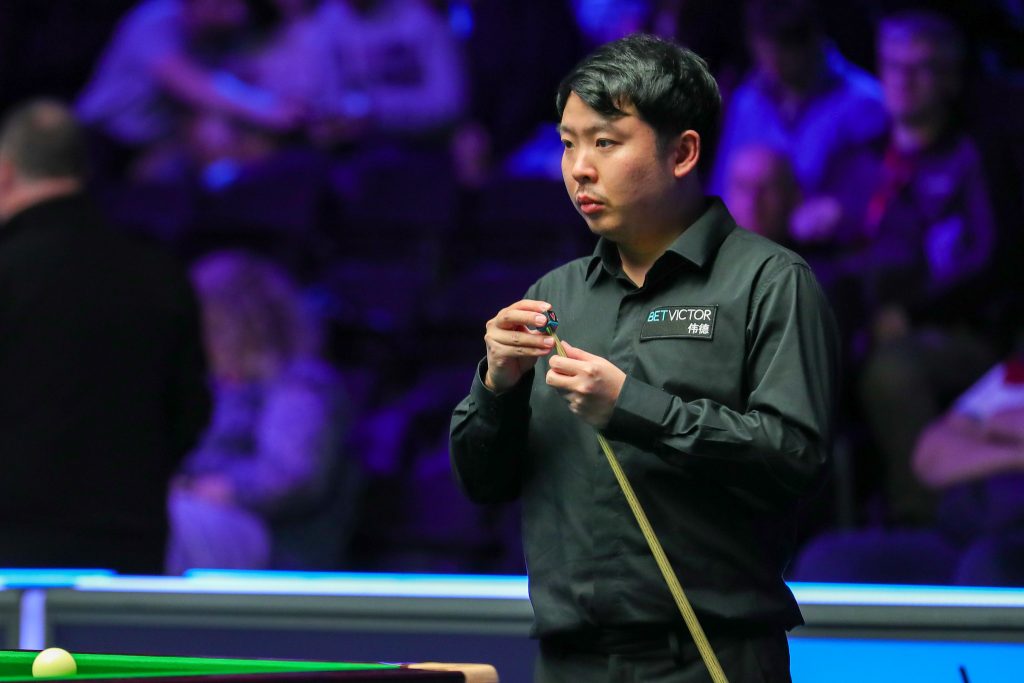 After losing the opening frame, world number 87 Zhang enjoyed his perfect break in the second, potting 15 reds with blacks and clearing the colours. The 30-year-old from China will earn the tournament’s £5,000 high break prize if the 147 is not equalled. It’s the 177th maximum in snooker history and first of the 2022/23 season.

Zhang went on to take the next four frames with top breaks of 91, 80 and 72 as he secured his place in the final stages in Germany next month.

Marco Fu scored his first win in a ranking event since the 2020 European Masters, beating David Gilbert 5-1 with top breaks of 69, 67 and 115. Fu has spend most of the past two years at home in Hong Kong due to travel restrictions, but having returned to the UK this season he is looking to resurrect his career.

Xiao Guodong made four centuries as he beat Xu Si 5-4 in an enthralling Chinese derby. A run of 103 from Xiao made the score 1-1 then he lost three frames in succession. He hit back to take the next four with runs of 106, 103 and 115.

Remarkably, Zhang’s highest break in a professional match was “only” 140 before yesterday…  Anton Kazakoz, Anda’s opponent, very sportingly showed his appreciation for some of the difficult shots And had to play, notably on the colors.

Marco Fu certainly did put the work in because the improvements in his game, as compared to his recent CLS outing, are massive. The only obvious remaining weakness yesterday was his long potting.

Lyu Haotion played well again, which is nice to see. Chang Bingyu had four breaks over 50 in his demolition of Ian Martin. Ian himself made a 96 in the only frame he won.

Maybe it’s because it was the last match of the day, but there is nothing here about Antony Hamilton’s 5-2 victory over Mark King. It was 2-2 at the MSI. After that Mark only scored 4 points, and I’m not sure if he potted a couple of ball or if he was awarded a 4 points penalty following a foul by Anthony… What happened there???