This is WST report on what happened yesterday in Fürth: 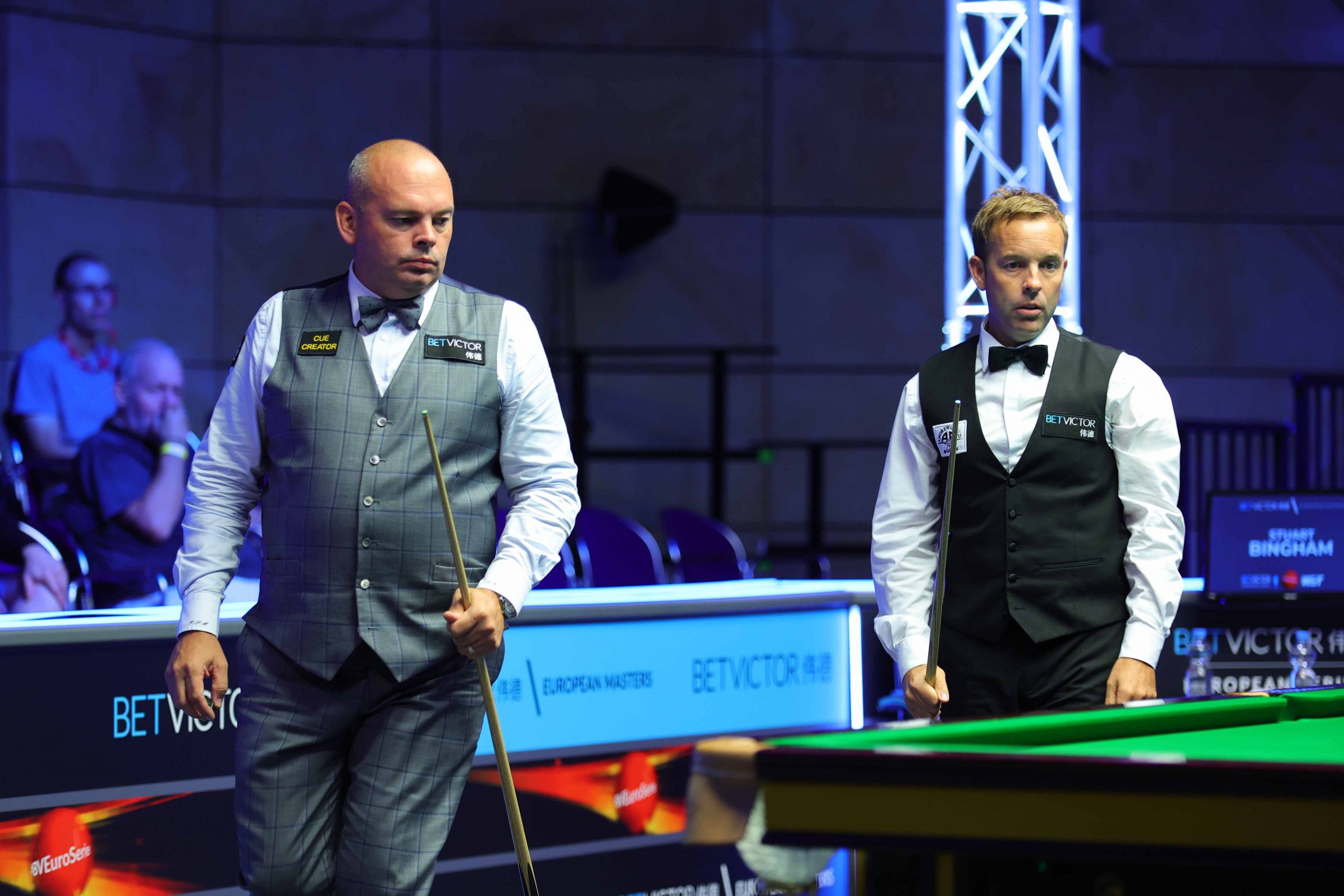 Ali Carter defeated Stuart Bingham 5-4 in a superb contest, but maintained there was no longer a rivalry between the pair following his progression to the last 16 of the BetVictor European Masters in Fürth.

The Essex cueists grew up battling with each other on the local junior snooker circuit and have since faced each other over 30 times on the professional tour. They’ve contested a deciding frame at the Crucible, which Carter won and met in the Masters final back in 2020, when Bingham was victorious.

However, two-time Crucible finalist Carter admits that Bingham’s achievements winning the Masters, 2015 World Championship and six ranking titles in total, mean that any rivalry has dissipated. Carter is still seeking his first ranking silverware since the 2016 World Open.

Bingham claimed the opener this morning, before 43-year-old Carter took charge of proceedings. The Captain cruised to four on the spin, making breaks of 89, 99 and 65 on his way to leading 4-1.

From there 46-year-old Bingham stormed back into contention. He embarked on a maximum attempt, before breaking down on 88. Bingham followed that up with a century run of 117 in the seventh and then took the eighth to force a decider at 4-4.

Carter showed his class at the crucial moment, stopping the rot with a superb break of 103 to get over the line in the decider. Next up he faces David Grace in the last 16.

Carter said: “I don’t think there’s a rivalry anymore. Arguably Stuart is above me now, he beat me in the final of the Masters and won the World Championship, where I lost in two finals. We’ve had similar careers, but he’s managed to get it done on the big stage and I haven’t. It is always a good and close game between us. The rivalry is gone, we are old men. We aren’t 16 or 17 and hating each other. I wanted to turn up today and give it my best shot, that is what I’ve done.

“I’m working hard and I am doing all of the right things. You have to be more philosophical when you lose. It isn’t the end of the world and you live to fight another day. Sometimes I take it very badly. You never know whats round the corner. I lost my British Open qualifier recently, but if someone said I could go on and win the European Masters, I would have taken it. I’d have said forget about the British Open. I’m not saying I’m going to win this, but I’m still in so let’s have a go.”

Judd Trump kept up his quest to return to the world number one spot with a 5-3 win over Andrew Higginson.

The Ace in the Pack will depose Ronnie O’Sullivan from the summit of the world rankings, if he reaches the final this week.

Trump top scored with a break of 103 in the decisive frame today and now faces Pakistan’s Farakh Ajaib in the last 16.

Jones secured his place in the last 16 with a 5-1 defeat of Mark Joyce. The Welshman is keen to go on a run this week and dedicate his showing to long time sponsor and uncle Bryan Alexander, who sadly passed away earlier this week.

Judd Trump will need to improve if he is to reach the final and “depose” Ronnie. He did what he needed to do but he was far from his best. Andrew Higginson is now an amateur. He’s still a good player but playing the World number 2 on the main table was a bit too much. Judd will face another amateur first today: Farakh Ajaib. Not reported above but … Farakh beat Marco Fu by 5-3. He’s no pushover. Should Trump win – and tha’s no certainty – he will face Hawkins or Milkins in the evening. That’s not an easy day in prospect then…

The report doesn’t say a thing about Wu Yize inflicting the opposition another whitewash: this time it was Rory McLeod on the receiving end of the drubbing.

It also completely overlooks what was probably the most unexpected result on the day:  David Grace beating Jackson Page by 5-0! I don’t think anyone saw that coming! David had breaks of 120, 104 and 52; Jackson scored only 122 points in the whole match.

And … something that pleased me … with so many “amateurs” doing well this week, the commentators reflected that all those guys have been pros, some for many many years, and are not actually amateurs, they are ex-pros, with all the experience that comes with it, playing under amateur status. And one of them added that the same was actually true for James Cahill when he beat Ronnie at the Crucible.