Skip to content
HomeAnd … some more about Jamie Hunter

The post I wrote yesterday triggered a lot of reactions, not of hate, but not all positive either. The whole thing was started by Barry Pinches, who said he would like to hear what the other women on the tour actually thought, and then Matthew Stevens joined in, pointing out that no woman ever succeeded on the main tour and that there must be reasons for it. If not, he added, there should be just one tour. Wendy Jans and Jan Hughes came by and agreed with him. On the other hand Diana Schuler insisted that all the women she had spoken to were appalled by the hate messages.

Maria Catalano was interviewed by Hector Nunns and went even further:

he live issue of transgender participation in sport erupted in snooker in August after Jamie Hunter of Widnes won the US Women’s Open in Seattle. The Sportsman has conducted interviews with both former women’s No1 Maria Catalano, strongly against the current rules allowing trans players in the women’s game, and then Hunter herself on her ambitions and the pandemonium on social media that has followed a breakthrough success.

Former world No1 Maria Catalano claims that even in the non-physical arena of snooker men enjoy a significant advantage over women – and that in the wake of trans player Jamie Hunter’s success at the US Women’s Open in Seattle the rules on participation should be tightened to more closely mirror the policies of swimming and rugby that have banned those having transitioned.

Catalano, 40, is a five-time world championship runner-up and famously a cousin of record main tour seven-times world champion Ronnie O’Sullivan. She insists that her views are driven only by a desire for a level playing field for women rather than prejudice or hate.

And Catalano has not only threatened to quit, but even predicted the eventual demise of the women’s game unless further action is taken by the authorities.

She said: “On this point I just feel I have to speak out, I don’t feel that women’s voices have been heard and it has been really playing on my mind. I was probably first aware of transgender players competing in the women’s game last year at the event in Leeds.

“I haven’t played much the last four years. I lost my father, and then the tour was suspended due to Covid. But before that I have put my heart and soul into it since I was 15.

“Due to the lack of funding I had to work as well, which I believe is why I never quite fulfilled my potential. So snooker for women has always been tough.

“We have fought so hard for our rights in the past – myself, Reanne Evans and others got people to write letters to allow us to play in leagues and clubs that banned women.

“I don’t believe that women can compete against men on a level playing field in sport. We are wired differently, we think differently. We are mentally different.

“There is a reason why they started a women’s tour. In the past Allison Fisher has tried it, so has Karen Corr, so has Kelly Fisher – top players – down to Reanne Evans who is the best woman player I have seen.

“And even she can’t crack it in the men’s – it just hasn’t happened. So I think over a long time it has been proven that women can’t compete with the men in snooker.

“I have asked myself the question as to why that is most of my life. But it is there as a fact, in black and white, right from the 1980s. The main tour is open to both, and nobody is stopping Jamie doing that. 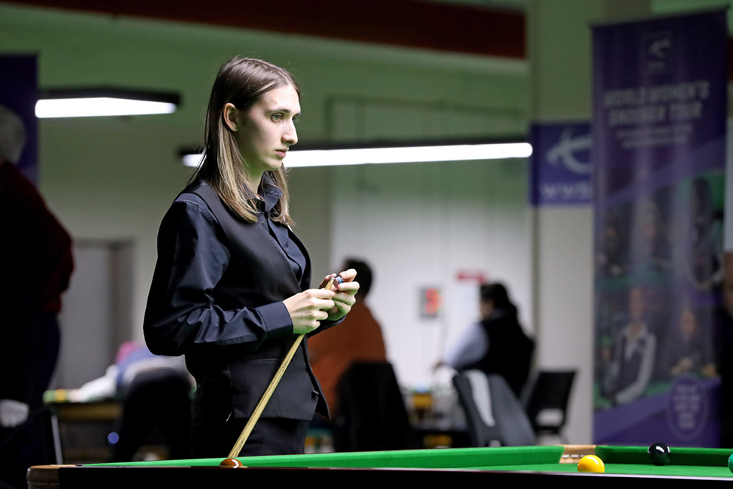 “People are making it out to be a hate thing, even those running the tournament in the USA put a #HateWontWin on social media. I thought that was disgusting.

“That absolutely broke my heart. It is not about hate. I have no problem with transgender people. It is their body and their lives, and they are at liberty to do what they want.

“This is only about how it affects other women in top-level sport and competition, and that’s why I am speaking out. It is causing conflict in our sport as it has in others, and you can’t just say anyone with a view is trying to generate hate. There is a principle here.

“I asked about this and clarification of the rules from a year ago numerous times, and didn’t get it. Since Jamie has won this event we have now had comments from Jason Ferguson.

“This is going to sound extreme – but with the current rules, what would happen if Ronnie or Mark Selby or any top player decided to transition tomorrow?

“It won’t happen, but they would obviously wipe the floor with the existing women players. And would that be right? The policy in place should have been made clearer in the past, I don’t think I have been kept informed having asked.

“I would say 90 percent of the players on the Women’s Tour don’t agree with this being allowed to happen, from my conversations. I do believe 100 percent there is an advantage there even in snooker after transition, and so I would like to see the rules tightened up in our sport.

“As a man Jamie never really did anything. And if this is allowed and becomes more common, there is no future for women’s snooker. I don’t want to see the end of women’s sport, it has been too hushed up, and only now Jamie has won an event has it gone big.

“I would totally change the rules, and bring ours into line with some of those other sports that have banned transgender athletes from competing in women’s sport.

“And if this is allowed to happen, I will have to stop playing which would break my heart. It is just not fair, and biological women are being shut down by being told it is only a hate thing. And it isn’t.“

Neuroscience indeed shows that there are biological differences between the “male” and the “female” brain. This is not surprising as, after all, our brain is part of our body and is influenced by our hormones. However, the influence of the environment, society and education is very important. Also, all those studies are based on the observation of thousand of individuals, but every individual is different and the “on average” characteristics mean nothing for the atomic individual.

I don’t think that any of those studies focussed on snooker, but many of them considered the alleged superiority of boys when it comes to mathematics. What they have shown is that by the end of puberty there is no statistical difference, but the “timing” of the development of those mathematical aptitudes is different. The same proved to be true for other scientific “capabilities”, notably physics. Those studies also showed that despite being as good as men in sciences, many women still chose another “course” in life, under social and cultural pressure.

In the previous post I wrote that I have a PhD in Maths. When I was in my first year in Uni, we were about 140 in the “Mathematics” curriculum, with a significant majority of boys. By the end of the main curriculum (4 years), only 32 remained, and it was 50/50 … 16 boys, 16 girls. What happened then though was that most girls opted for a career in teaching, whilst boys looked for jobs in the industry or research. That’s not about capabilities, it’s about society.

I have no definite opinion as to whether the male brain is fitter for snooker than the female brain. I don’t have the data for that. What I know for sure however is that there are many more fathers introducing their sons to the game than fathers, or mothers, introducing their daughters to the game. And more girls will “quit” than boys, over feeling unwelcome or having to deal with prejudices or sexual harassment in clubs. As long as this situation remains unchanged, the emergence of a female “Ronnie” or “Selby” is unlikely. They are truly exceptional individuals. They are truly exceptional even in the “male” population. To increase the chance to discover this type of “exceptional person” in the female population, there is only one way and that’s to increase the number of female players. It’s a number game. And this is where Maria maybe has a point. IF transgender players – who started playing and were encouraged to play as boys – were to dominate the women tour, it would and indeed will send the wrong message to aspiring girls, because, to succeed, you first have to believe that you can succeed and that you will get the chance to succeed. You also need positive experiences.

It’s a very difficult and complex situation. I certainly don’t claim to have an answer when it comes to snooker. For other sports, involving muscular volume and power, it’s obvious.

Hate messages though have nothing to do with this difficult question. Hate messages are about prejudices and fear of the “different”.