Neil Robertson played Mark Williams in the afternoon session in Hong Kong. He won by 5-3. Considering that Mark Williams had barely slept over the last two days and was picked up to play about one hour arriving at his hotel in Hong Kong, he did really well. 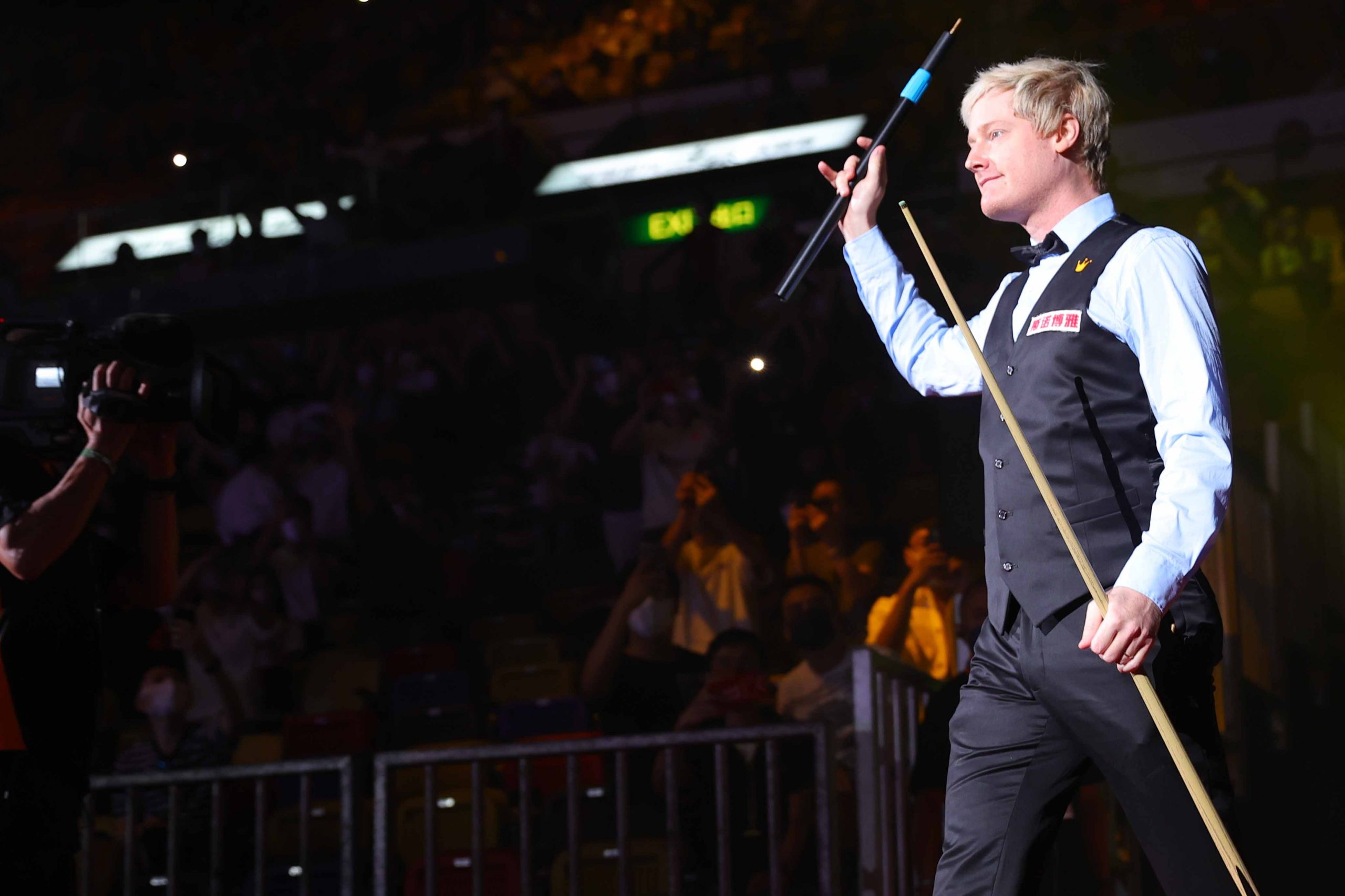 Neil Robertson made two centuries, including a tournament-high 140, in a 5-3 quarter-final win over Mark Williams to boost his hopes of winning a second Hong Kong Masters title.

Australia’s Robertson was victorious last time the event was staged back in 2017, when he defeated Ronnie O’Sullivan to capture the title. He’s already got off to a winning start this season, after claiming the World Mixed Doubles crown alongside Thailand’s Mink Nutcharut.

A weary Williams put up a strong fight despite only arriving in Hong Kong hours before the match got underway. The Welshman replaced Zhao Xintong, who was withdrawn from the event due to testing positive for Covid-19.

Next up Robertson faces the prospect of a semi-final against either seven-time World Champion O’Sullivan or Hong Kong’s three-time women’s World Champion Ng On Yee.

Williams showed no signs of tiredness at the start of the match, and opened proceedings with a barnstorming break of 133 to move 1-0 in front.

Robertson hit back immediately with a century run of 105 to restore parity at 1-1, before Williams took the third on the black. However, Robertson pegged him back again and they went into the mid-session locked level at 2-2.

After the break Robertson had a stuttering start to the fifth frame, fouling after a disturbance from the crowd. However, he recomposed himself and fired in his tournament high 140 break to move in front for the first time at 3-2. 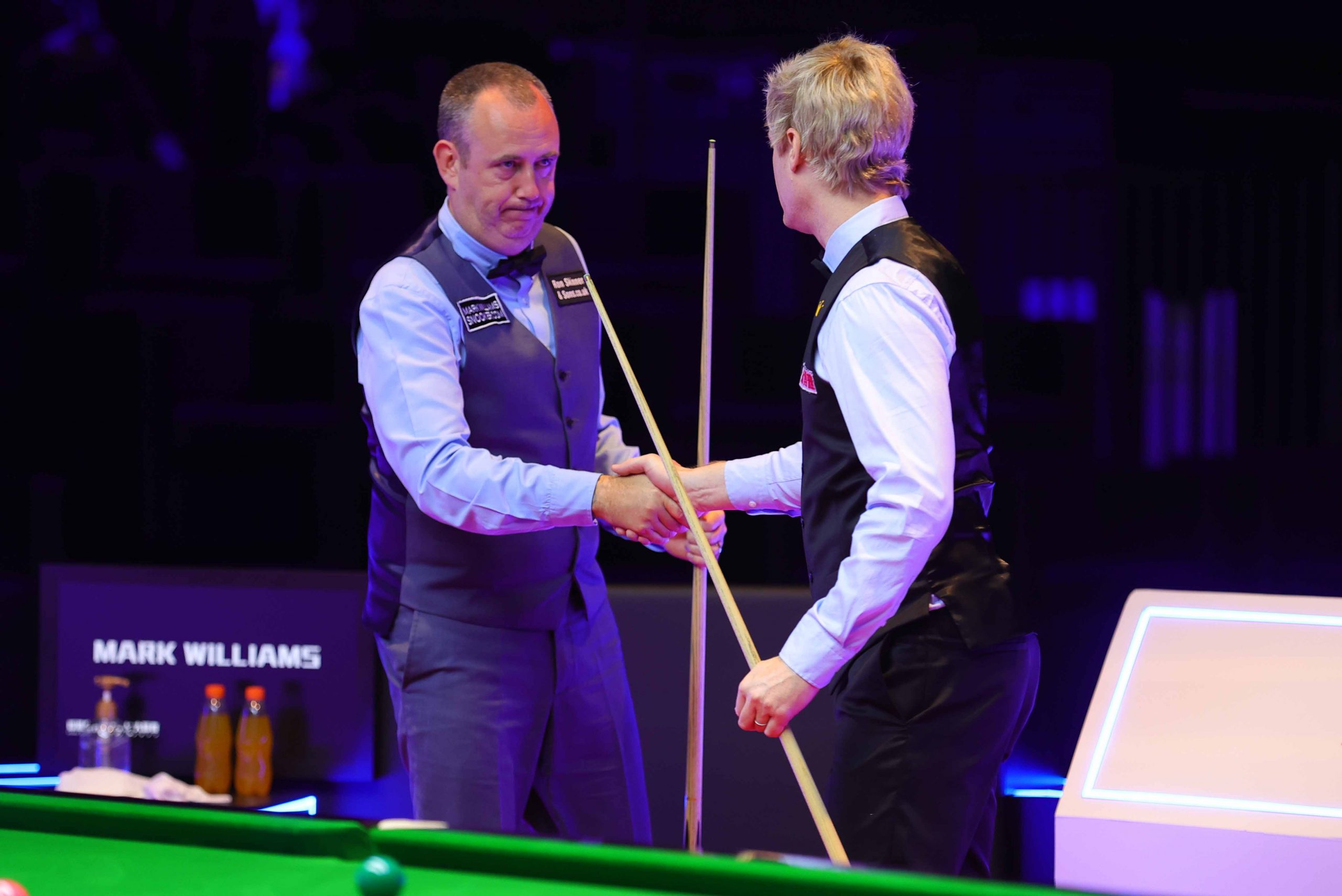 Melbourne cueman Robertson moved a frame from victory by taking the sixth, but Williams dug deep with 80 to close within one. Williams had the first chance to force a decider, but suffered an unfortunate in off. Robertson took his chance and booked a place in the last four.

Robertson said: “He only arrived a few hours before we were going to play, but to come out and make a 134 first frame was incredible. I think later on in the match he started to get a bit tired, but nevertheless he still played a really good game and I think I did my bit as well.

“This is probably similar to a tennis stadium. It is incredible. I’m sure there will be even more here for the semi-finals. There were still so many people in the crowd today. I can’t wait to see what is in store tonight, Ronnie and On Yee are probably the biggest draw for the fans.

“Hopefully this event will lay a good marker to allow players to start travelling the world and around Asia again. It is brilliant to have this tournament on with all the best players. I hope this lays a marker to get things going again.”

Williams said: “I’m knackered. I had about two hours of sleep in two days. I didn’t arrive into my hotel until about 10:45 and I got picked up at 11:45 to play my match. I knew I wasn’t going to win, but I tried my best and somehow I got three frames off him.”

Something the Mark said too and isn’t reported by WST is that given the circumstances he knew he couldn’t win and that if it wasn’t for the money he wouldn’t have made the trip. Such honesty will probably not please everyone, but that’s the reality. It’s a job and he has a family to support.

Here are more pictures, shared on weibo. Most of them are by SuperStars Online

The evening match was very one-sided, as Ronnie beat On Yee Ng by 5-0 in less than an hour.

Ronnie scored heavily when in the balls but On Yee did have chances. She couldn’t take them.

A world record crowd of over 5,000 spectators at the Hong Kong Coliseum enjoyed a clash between three-time Women’s World Champion On Yee, who is from Hong Kong, and current world number one and World Champion O’Sullivan. The contest was something of a mis-match as O’Sullivan romped into the last four of the invitation event with top breaks of 72, 100, 59, 81 and 95.

The Rocket had cast doubts over whether he would be able to be in Hong Kong this year, after sustaining an elbow injury, but he recovered in time to compete at the recent World Mixed Doubles and British Open and made the journey this week.

On Yee will leave disappointed that she couldn’t register a frame in front of her adoring home fans, but having also competed in the World Mixed Doubles she can reflect on two invaluable experiences.

O’Sullivan now meets Neil Robertson in the semi-finals on Saturday night – a repeat of the 2017 final won by Robertson. John Higgins and Marco Fu go head to head in the first semi-final on Saturday afternoon.

“It was nice. Every event in Asia is fantastic. They support it really well and they are major events. It was nice to play in front of an enthusiastic crowd. It makes you want to play well and do well for them,” said 47-year-old O’Sullivan.

“Every match here is capable of being a final in any tournament. Playing against top quality opposition and knowing you need to be at your best, motivates yourself to do well. These are special events and you want to play in as many of these as you can.

“It would be great if we could have a massive crowd again tomorrow. Neil is the most consistent player on tour by a mile. I play alright in spells, but I’m not as consistent as Neil is. I’m going to have to find some good stuff to have a chance of winning tomorrow.”

And here more images of the match, shared on weibo, mainly by SuperStars Online:

And some around the venue with Jan Verhaas, shared by Tatiana Woollaston on twitter

The outcome of the afternoon match will depend a lot on how John Higgins plays. Marco plays well, we know that, and he’s very motivated. He will have the weight of the crowd’s expectations to cope with though. Also, we know his strengths, he’s a clever and reliable break builder, but also his weakness he lacks cue-power and therefore loses accuracy when forced to play with power. He gave Mark Selby many opportunities. Mark didn’t take them, but John, on form, will.

Neil Robertson will be favourite for the evening match. Ronnie hasn’t been able to practice as much as he usually does in the recent months. That said, he barely missed when in the balls today. If Neil gives him openings, and if Ronnie plays like he did today, he will probably make the most of these chances.