Day 3 at the 2022 UK Championship saw wins by Ronnie, Zhou Yuelong, Stuart Bingham and Jamie Clarke. Parity between seeded and unseeded winner was preserved, but that stat was probably helped by Willo’s woes.

You can read about Ronnie’s win here.

And here are the reports by WST: 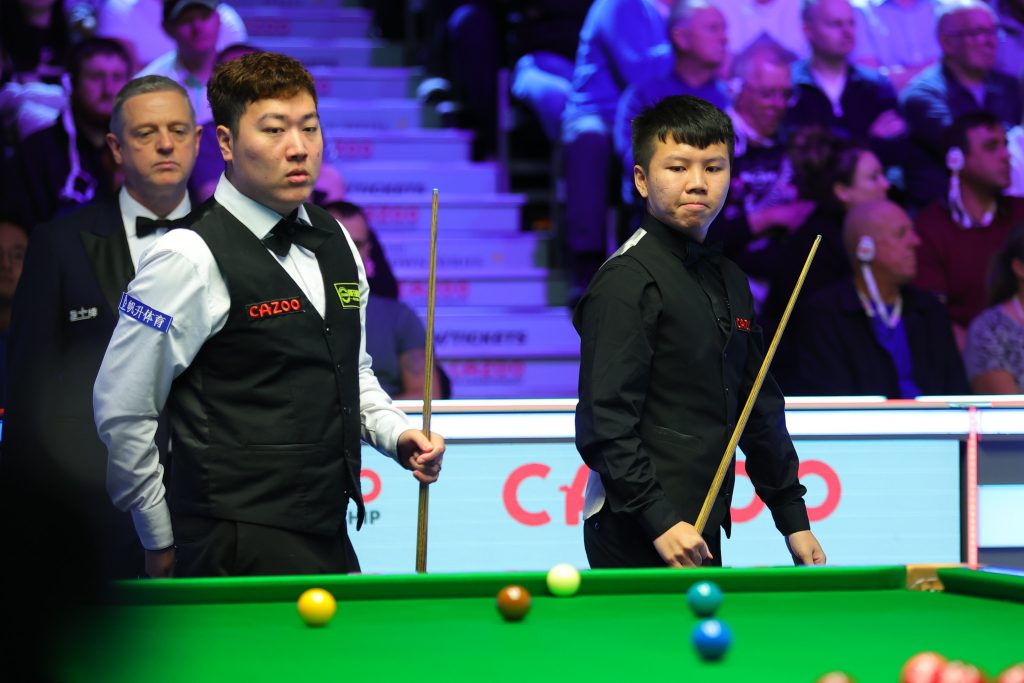 Zhou’s 6-5 defeat of Yan in a Chinese derby was the match of the tournament so far, with a century and nine more breaks over 50 in the 11 frames. Runner-up to Mark Allen in the Northern Ireland Open, 24-year-old Zhou is playing some of the best snooker of his career and will relish the chance to take on the Rocket.

“We both played well,” said Zhou, who won the World Cup for China alongside Yan in 2015. “When I missed the black in last frame I thought I would lose, so I’m a lucky boy. I will enjoy playing Ronnie because he has always been my favourite player to watch.”

Mark Williams had to play without underwear for most of his 6-3 defeat against Jamie Clarke at the Cazoo UK Championship as a bout of food poisoning left him making more toilet breaks than big breaks. 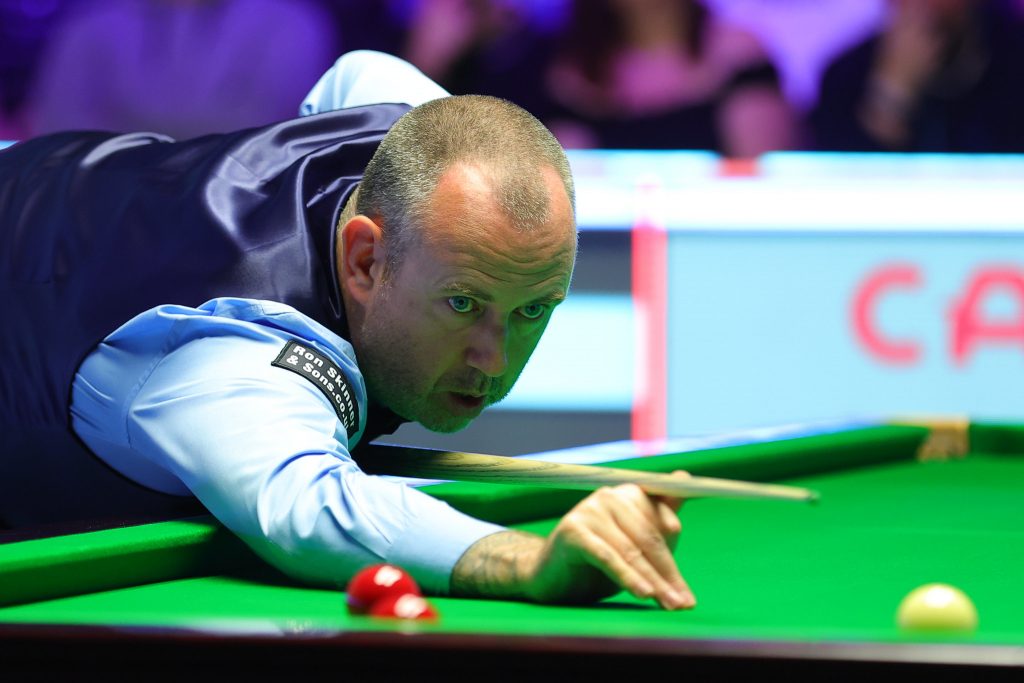 Not the world number two

The two-time UK Champion was clearly struggling from the beginning of his match against fellow Welshman Clarke, dashing out of the arena early in the first frame to find the nearest lavatory. And the world number six made too many mistakes on the baize as he joined Zhao Xintong, Neil Robertson and John Higgins as casualties within the first three days in York.

“That was probably the worst I have ever felt, trying to play a snooker match,” said 47-year-old Williams. “If it wasn’t such a big tournament, I don’t think I would have come back out after the interval. I started the match with a pair of boxer shorts and by frame three I didn’t have them any more. If you see a pair in the bin, they’re mine.

“I have been playing really well in practice, but I couldn’t play tonight. I was shaking, shivering, boiling hot one frame and freezing cold the next. I tried, but I knew I had no chance. I can’t even go home tonight because I’d need about 20 stops on the motorway. I’ll have to wait until the morning.” 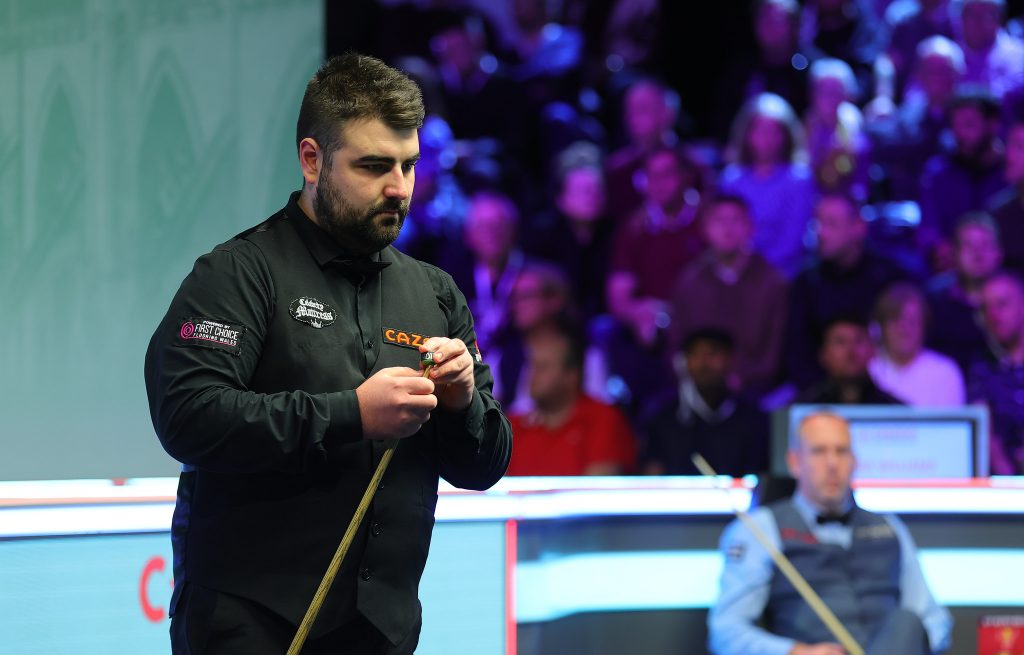 Clarke had never previously won a match in York, but is now through to the last 16 to face Ding Junhui. The 28-year-old from Llanelli came through three rounds of qualifying and has now claimed one of the biggest scalps of his career so far.

The first six frames tonight were shared, then Clarke made a break of 56 as he edged 4-3 ahead. In frame eight, Williams trailed 32-48 when he missed a short range red to a top corner, and that proved costly as his opponent doubled his lead.

Three-time Crucible king Williams looked set to pull one back until he missed a red to centre on 57 in frame nine, and Clarke finished in style with a 64 clearance, his highest break of the match.

“I could see Mark wasn’t well and I sympathised with him but it didn’t put me off,” said world number 49 Clarke. “In a strange way it helped me because it took the attention away from me. I’m just chuffed to get a good win against a top player in one of our biggest events. This is a great opportunity for me to go deep because I’m trying to get into the top 32.” 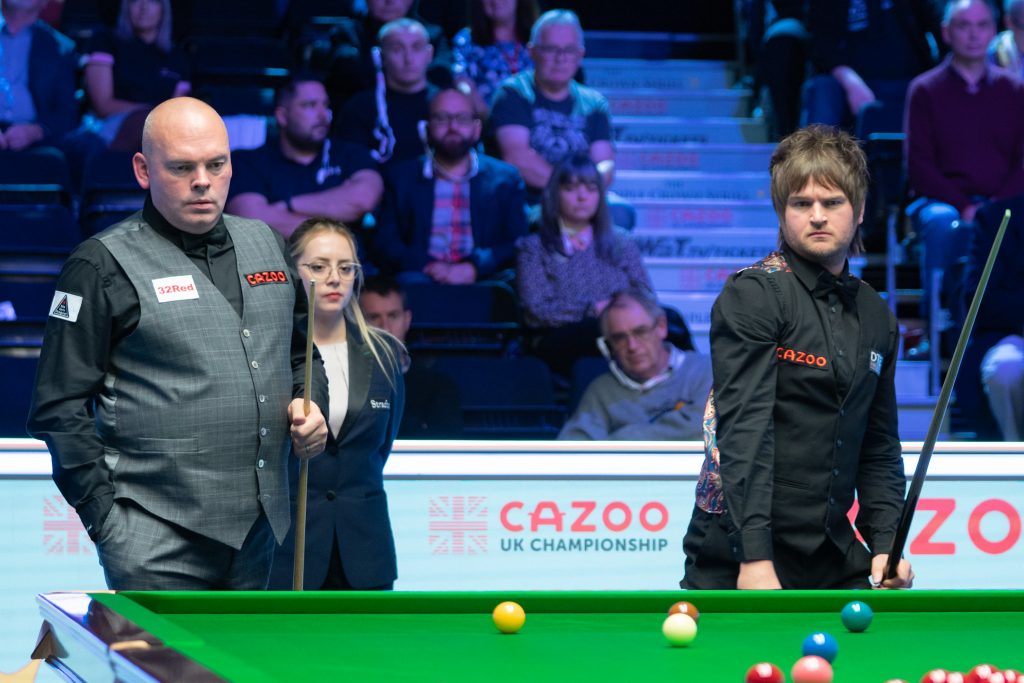 Stuart Bingham had a smooth path into the second round as he beat Liam Highfield 6-2 in just 104 minutes with top breaks of 54, 61, 58 and 56. Victory in this event would complete all three legs of the Triple Crown for Bingham as he has already won the World Championship and the Masters.

The Basildon cueman has had a slow start to the current season; this will be his first appearance in the last 16 of a knockout ranking event. “I have actually felt good in most of the events this season, people have just played well against me,” said Bingham, who now meets Joe Perry. “There is still a lot of snooker to play before Christmas. I was getting annoyed with myself in the first few frames tonight, then at the interval I had a chat with my manager and I was more focussed after that.

“I’m a big fan of the new format. I went to sit in the arena this morning when it was quiet – even when it was empty it looked great. I saw Jimmy White’s walk on the other night which was amazing – he’s a legend and the crowd was brilliant.”

The Zhou v Yan match was an outstanding one.

Both played very, very well for most of it and it was played in great spirit.

Here is the pre-match interview:

Zhou Yuelong had a very disappointing campaign last time around, but confident again, with a new cue and already some fine results this season, he is a threat once more.

The 24-year-old reached just one quarter-final over the entire 2021/22 season, but has already improved on that, making it to the Northern Ireland Open final last month, only losing out to home town hero Mark Allen.

The world number 21 has since come through qualifying to make it to the main stages of the UK Championship, with wins over Michael White and Jak Jones, and he feels confidence building again.

‘I got confidence from Northern Ireland and I keep this feeling till now, I’ve kept the confidence,’ Zhou said after beating Jones in his final UK qualifier.

On his run to the final in Belfast he said: ‘I’m not really proud, but it didn’t really hurt either, it’s just normal. If I won I’d definitely be happy, but if I don’t win I need to keep going at the next tournament

‘I’m not losing the confidence, he [Allen] played well, so I take the confidence here to Sheffield for the UK Championship and then I will take it to York.’

On his impressive return to form of late, Zhou reckons a change of hardware has helped, saying: ‘Maybe the reason is because I have a new cue, there’s more belief in myself to pot important balls, also control the cue ball much better. Every shot I feel better and more comfortable.’

There was little wrong with Zhou’s game before, though, with his quiet season last time around a little confusing, although it makes sense when he explains it.

‘I think, I don’t want to make an excuse, but to be honest I think last season started well, British Open quarter-final, but then I got Covid,’ he said.

‘Quarantine for 14 days, I missed matches at the Scottish Open, English Open, so then I missed the Grand Prix.

‘I think I was unlucky, every chance I had was missed, it made me a little bit sad.

‘It was a little bit of problem for my game, because after that I was so hungry to win my matches to gain my points back that it put pressure on me. In the World Championship I didn’t play well and lost in qualifying.’

It was a shame for Zhou’s progression because he is one of the best young players in the sport, but he appears to have put the disappointing year behind him and will hope for another good result in York when he takes on Yan Bingtao in the last 32.

Zhou does not play with Yan and Zhao Xintong in Sheffield, instead living in Darlington where he plays with the likes of Hossein Vafaei and Thepchaiya Un-Nooh, but he regularly visits his best pal in South Yorkshire.

‘Xintong’s my best friend, we’re really close for 15 years,’ he said. ‘Last two years I moved to Darlington, but we still speak, every month I come to Sheffield to meet and have food.

‘Darlington is quiet, not a lot of shops or restaurants, but lots of good snooker.’

Zhou takes on Yan at 1pm on Monday 14 November at the Barbican in York.

Thanks to Phil for yet a very good, honest and revealing interview. Hopefully such interview will help British fans to understand and warm to non UK/Irish players. Rob interviewing Zhou also marks a change in the BBC mentality. A few years back they barely ever paid attention to the Chinese players other than Ding, and interviews were always conducted with an interpreter.

Yan’s defeat leaves him “vulnerable” for the Masters. Hossein Vafaei and David Gilbert could gat past him but they would need to reach the semi-finals. Should they both win today, they could meet in the QF round. Hossein has also been speaking to Phil and he’s not in a good place at all with what is going on in his country. Snooker becomes less important when such things happen. Bizarrely though, sometimes, not caring so much about it can help to win. We shall see.

Anyone else not currently in the top 16 and still in the draw would need the title.

There is still a lot of snooker to be played before the Masters, but BBC insists that the Masters’ draw should be made during the final of this event. This, in my view, isn’t right at all.

The Williams v Clarke match was hard to watch not because of the snooker but because it was so obvious that Willo was feeling very unwell and struggling badly. He deserves huge credit for showing up in the state he was and he still somehow managed to play and win three frames.

I hope he’s feeling better today. He will need a few days to recover probably.

I didn’t see anything from the Bingham v Highfield match. From the scores and comments on social media, it seems that “Ballrun” is in very good form. He’s more than capable to win this event.