Today will see Ding Junhui take on Tom Ford and Mark Allen face Jack Lisowski in the semi-finals of the 2022 UK Championship in York.

This is how we got there:

You fill find the account about Ding’s excellent performance and Ronnie’s disastrous day in office here.

That same afternoon, Tom Ford got the better of Joe Perry (report by WST) 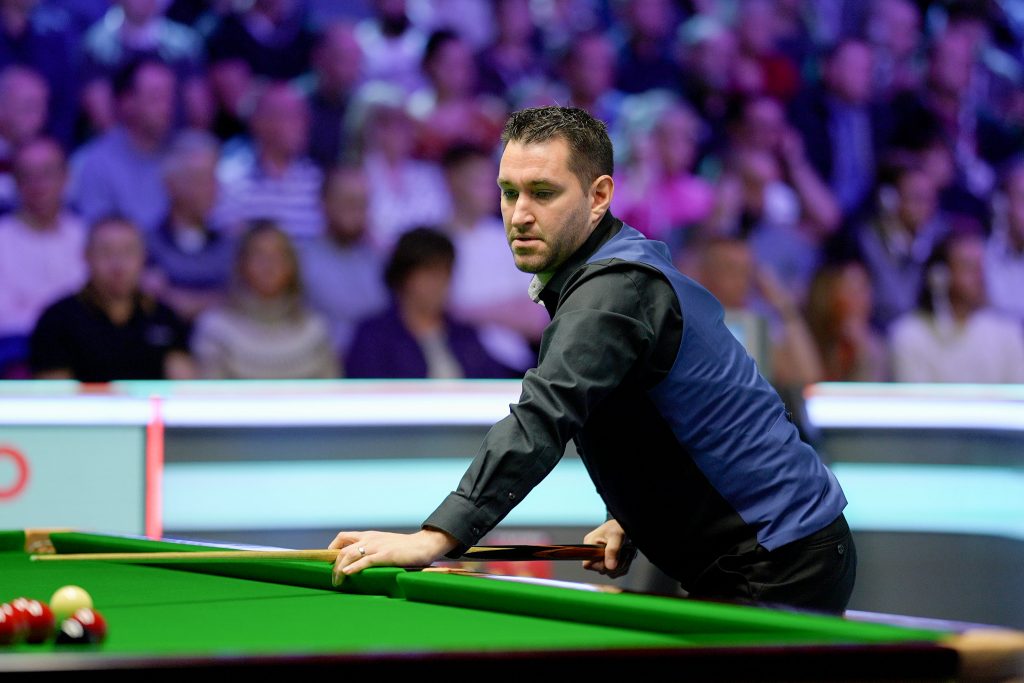 Leicester’s Ford is through to the semi-finals of this event for the second time – the first came in 2018 when he lost 6-1 to O’Sullivan. The 39-year-old has never won a full ranking title so victory this week would be a remarkable time to make that breakthrough. He is into the semi-finals of a ranking event for the seventh time in his 21-year career and first time since the 2021 German Masters.

World number 32 Ford admits that a fragile mentality has held him back in the past, but in recent season he has worked with a sports psychologist and his self belief is clearly more robust. He proved the stronger player in the closing stages today and is now guaranteed a minimum of £50,000.

Ford started strongly with breaks of 103 and 62 for 2-0, then Perry pulled one back with a run of 70. In frame four, Perry led 51-23 when he rattled the penultimate red in the jaws of a baulk corner, and Ford punished him with a 41 clearance to lead 3-1 at the interval.

Back came Perry with 101 and 66 for 3-3, before Ford regained the lead with an 86. Cambridgeshire’s Perry had a scoring chance in frame eight but ran out of position on 25, and Ford took control with a run of 49. Perry later got the snooker he needed on the green, but then missed it to a centre pocket and Ford went 5-3 ahead.

He might have wrapped up the result in frame nine but left the last red in the jaws of a top corner when he led 66-40. Perry cleared for 5-4, but Ford’s 52 helped him dominate frame ten.

“At 3-3 I potted a long red and then something just clicked and I felt really good,” said Ford. “Every time I got in, I just felt like I was going to clear up in one visit. It’s a very strange feeling to have but I felt great, even towards the end. I knew I was going to get over the line as long as I got a chance.

“I’ve been working with (psychologist) Sabrina Francis, she’s been great. In the past, I could miss something and my head would go down but now if I miss something, I’ll forget about it quickly. I’m still going to have lapses where my head can be in the car park, but at the minute my head’s strong and I feel good.

“Ding’s an absolute class act, he always has been. His game has dipped a little bit in the last few years but it looks like he’s back again. It’s going to be a tough match.”

Perry said: “When I won the frame to go 5-4, in days gone by that might have really affected Tom. But he’s a different player these days. He’s matured, he’s worked on the mental side of his game, and he played a great last frame. Jack Lisowski aside, he’s the best player who hasn’t won a tournament yet. He’s been knocking on the door for a long time and I’ve seen a big difference in him mentally. I’ve played some really good stuff in this tournament and it took an inspired Tom Ford to beat me today.”

And this is WST account on the evening session

Jack Lisowski made a record-equalling four consecutive centuries as he reached the semi-finals of a Triple Crown event for the first time with an emphatic 6-1 victory over Shaun Murphy.

Lisowski joined an elite group of just seven other players who have made four tons in a row in a professional tournament. More importantly for the 31-year-old, he is through to the last four and just two wins away from winning his first title. On Saturday evening in York he’ll face Mark Allen, who came from 4-2 down to beat Sam Craigie 6-4. 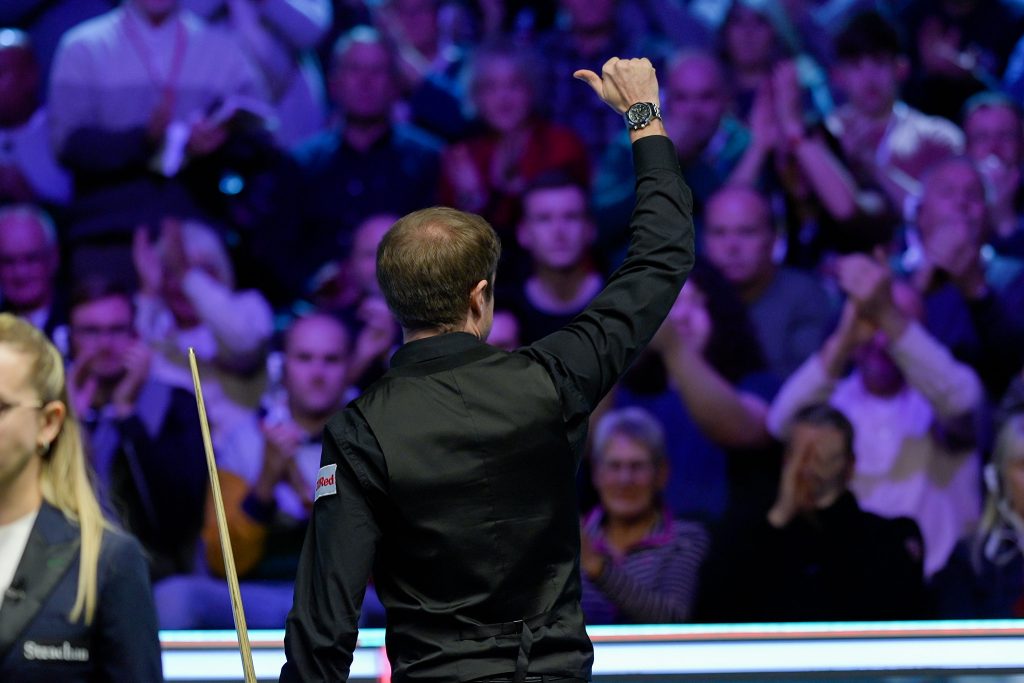 Lisowski is at the top of his game, thanks in part to the help of mentor Peter Ebdon. Playing with a clear mind and handling the pressure of competing for a maiden title, Lisowski’s vast natural talent is allowed to flourish. The Gloucestershire cueman has lost just four frames in his three matches in York so far.

The opening frame tonight was a rarity as it featured two breaks of 67, one from each player. Lisowski missed the blue to a centre pocket on that number, and Murphy made a tremendous clearance, taking the last five reds with blacks. That meant a respotted black, and a safety error from Murphy handed Lisowski the chance to convert a mid-range pot to a top corner.

Murphy had the chance of an immediate response but missed a tricky red on 28 in frame two and Lisowski capitalised with a fluent 105 clearance. That sparked his run of four consecutive tons as further breaks of 127, 123 and 100 made it 5-0. He had a chance to become the first player ever to make five in a row, but missed a tricky yellow on 20, and Murphy responded with 111, bowing to the crowd as he registered on the scoreboard.

Former World Champion Murphy had the chance to pull another one back but when he led 54-20 in frame seven, he played a push shot and instantly called a foul on himself. Lisowski cleared with 38 to settle the tie. 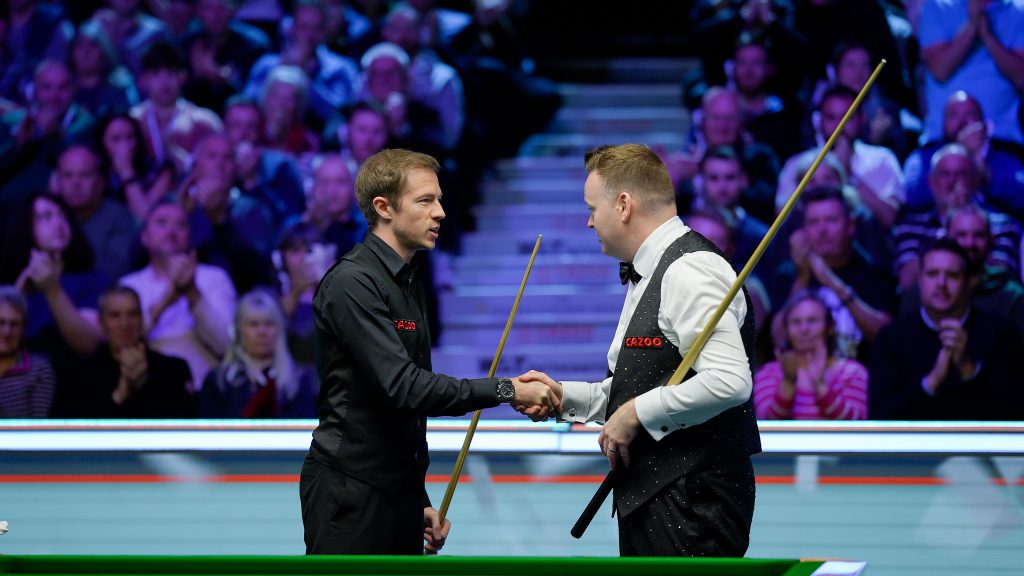 “That’s how I’d love to always play snooker, everything was going into the middle of the pockets,” said world number 12 Lisowski, who is through to his tenth ranking semi-final. “When it’s like that, the game feels quite easy.

“After the match, Shaun said some nice things, he’s a great ambassador and a lovely guy. He was very sporting when he called a foul on himself, credit to him.

“I’ve got to focus again, stay positive, bring my A game again tomorrow and not worry about the other guy. Yesterday I got a bit excited after beating Hossein Vafaei and I only got about five hours sleep. Tonight I feel much calmer, I’m just thinking about tomorrow’s game and being sharp for it. I don’t want to just get to a semi-final, I want to win this thing.”

Murphy said: “Every time I made a small mistake, I had to sit down and admire the wondrous talent pouring out of this young man that we have seen coming for for a long time. Maybe this could be his week. It’s not easy winning, but if he can sustain that for another 16 frames he’ll be UK champion.” 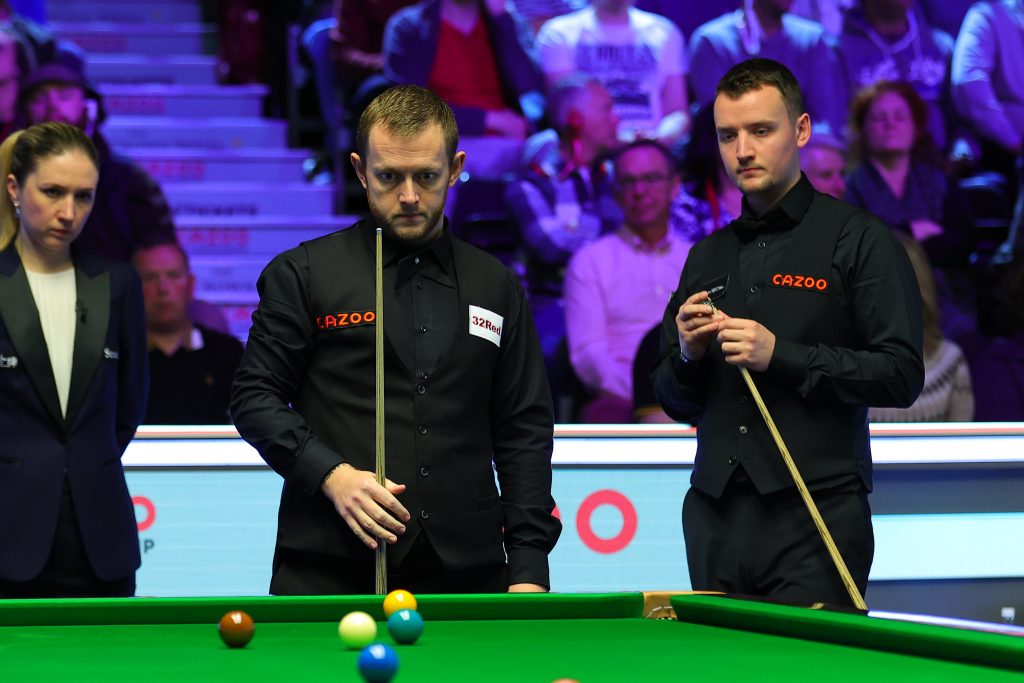 World number nine Allen is in a marvellous run of form having reached the final of the Cazoo British Open and won the Northern Ireland Open within the past eight weeks. He is into his 32nd ranking event semi-final and fifth in the UK Championship.

Craigie was playing one of the biggest matches of his career, but settled quickly with a break of 74 to take the opening frame. Allen got the better of a scrappy second frame then made a 105 to lead 2-1. In the fourth, Allen missed the blue off the last red when he had the chance to clear, allowing Craigie to go 18 points ahead on the pink. Allen got the snooker he needed, only for Craigie to pot a long pink for 2-2.

After the interval, Craigie compiled runs of 84 and 104 to lead 4-2, only for Allen to storm back with 50, 108 and 92 to edge 5-4 ahead. And Northern Ireland’s Allen scrapped his way through the tenth frame to stay on track for an eighth career ranking title.

“I played good stuff from 4-2,” said the Pistol, who was runner-up at this event in 2011 and 2018. “I wasn’t timing the ball well tonight but I hung in there, I was really good mentally, thinking good thoughts. At 4-2 I was hoping Sam would see the winning line. He played a few shots that were different to the way he played in the early part of the match, especially the break in frame nine when he rolled into the pack. I was surprised because that was negativity. I fed off that and kept him under pressure.

“I’m happy with where I am, I have won a lot of matches and wining breeds winning. If Jack plays like he did tonight I have to try to be ready for that. I haven’t had my best stuff this week but I’m still here.”

Ding yesterday looked very dangerous, back to his best. He has won this title three times already, he is more than capable to make it four. With younger Chinese players now winning titles, the pressure is a bit off him and he can play with more freedom. I have to make him favourite to win his SF today.

Tom Ford has always been a very capable and high scoring player. It’s the mental side of the sport that has been a problem. He is clearly much better at managing that nowadays, but will it be enough? I’m not sure.

Mark Allen looks happier, healthier … and is currently on top of the one year list. He’s been the best and most consistent player so far this season. I don’t expect his level to drop today.

Jack Lisowski though has been excellent all week. There weren’t many silly mistakes. He played a very attacking game but was never reckless. For years he’s been the cause of a lot of frustration for me and I’m sure for others too. But now he looks settled, much more mature. I rate Jack as the most talented player on the tour. Maybe it will finally convert into a big title tomorrow. I believe that it’s possible. I’d love that.