The quarter-finals in Edinburgh brought some excellent snooker and a lot of drama. They also produced an unexpected line-up. This afternoon Gary Wilson will play Thepchaiya Un-Nooh and tonight Neil Robertson will face Joe O’Connor. Neil is the only top 16 player left in the draw and, on paper, a huge favourite to lift the title tomorrow.

This is how we got there, as reported by WST:

Thepchaiya Un-Nooh scored his first ever win over Judd Trump, in the most thrilling fashion imaginable, beating the world number three 5-4 on a respotted black in the decider at the BetVictor Scottish Open.

The pair had previously met five times on the World Snooker Tour, with 23-time ranking event winner Trump prevailing on each occasion. The most painful of those losses for Un-Nooh came in the opening round of the 2019 World Championship, where he was narrowly edged out 10-9. Trump went on to win his first and only Crucible crown to date.

Victory sees Un-Nooh end his losing streak against Bristolian Trump and progress to his seventh ranking event semi-final, where he will face Gary Wilson. The Thai cueman landed a maiden ranking title at the 2019 Shoot Out, but is yet to taste silverware in a full format event.

Defeat will come as a tough pill to swallow for Trump, who hasn’t lifted the Stephen Hendry Trophy before. He will have to wait another year for that and also continues his hunt for a first title of the season. The Ace in the Pack was runner-up to Ronnie O’Sullivan at the Champion of Champions last month.

The match got underway at a rapid pace, with the pair putting on a show for the packed crowd in Edinburgh. Breaks of 53 and 79 from Un-Nooh and 104 and 102 from Trump saw the first four frames shared and they went into the interval locked level at 2-2.

Trump edged in front when play resumed, but Un-Nooh claimed a tight sixth to restore parity at 3-3. A contribution of 86 from Trump gave him the seventh, before Un-Nooh responded with 104 to make it 4-4 and set up a dramatic decider.

It came down to the final two balls and Trump had the chance to clear and steal. He missed the pink with the rest while trying to develop the black. It was left at the mercy of Un-Nooh, who potted it and left himself a tricky black for the match. Un-Nooh then missed a rest shot of his own and Trump deposited the black to make it 55-55. Eventually Trump had a chance on the respot to the yellow pocket but missed it and left a simple black, which Un-Nooh potted to secure a momentous victory.

“I am still excited. I have one thing to say. Everything has a first time. I’ve never beaten Judd before. I believe in myself and I can do it. I beat him today and I’m so happy.” said 37-year-old Un-Nooh.

“I lost to him 10-9 at the Crucible. I have never forgotten that match. He won the world trophy as well. I am so happy to beat him today.

“I had to be positive on the first black I missed with the rest. I thought I would pot it, but my cue speed wasn’t fast enough, it was too slow. I was so happy to get over the line. The table is fast, I thought the black Judd missed wouldn’t roll far enough for me, but it did.” 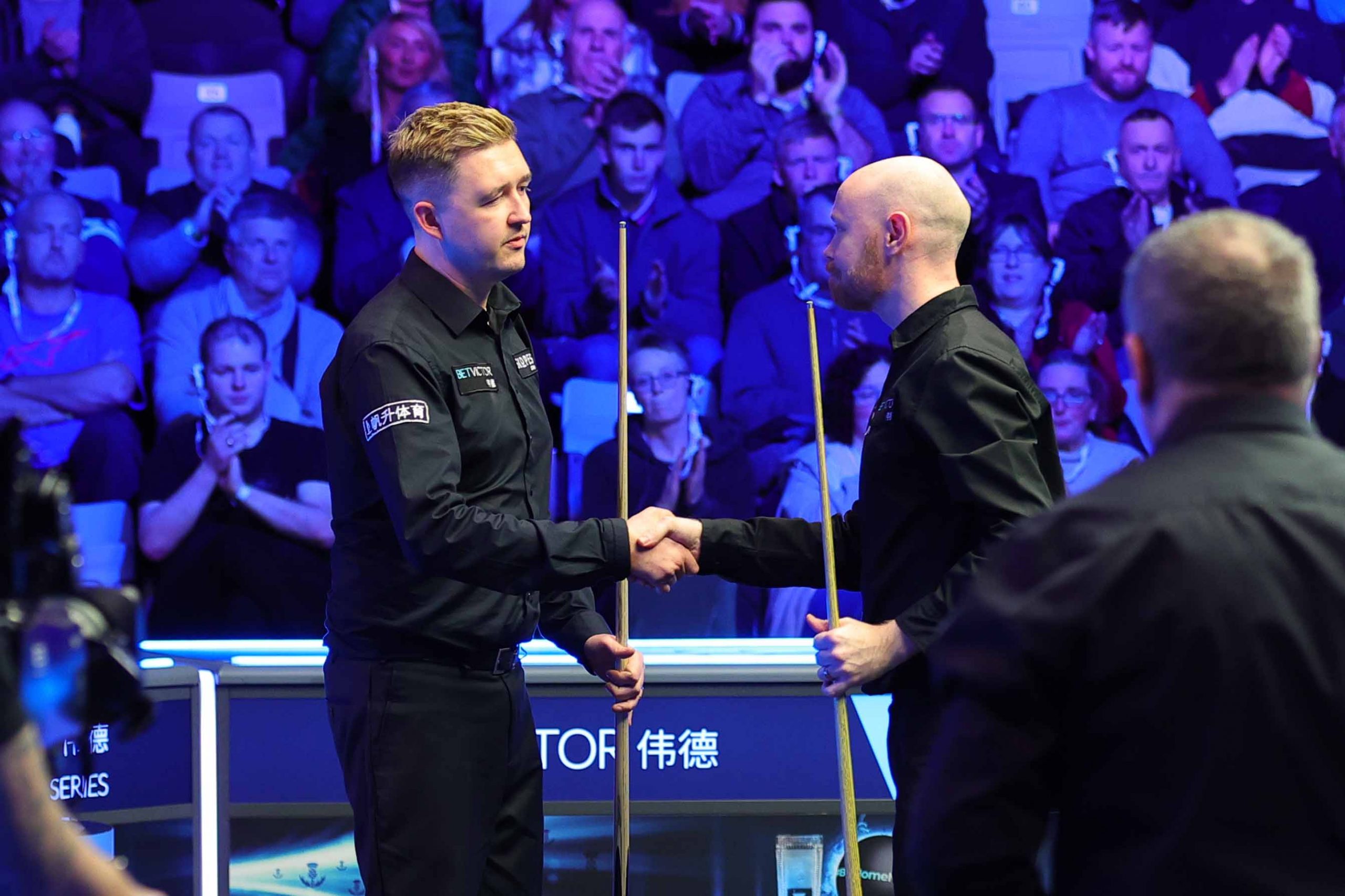 The second quarter-final was a clash of the Wilsons, with Gary battling past Kyren by a 5-3 scoreline to make his sixth ranking event semi-final.

The Wallsend cueman’s most recent appearance in the last four came during his run to the 2021 British Open final. He was runner-up to Mark Williams on that occasion. Wilson will be hoping to go one step further this weekend.

He crafted breaks of 65, 60 and 74 on his way to the win. After the match the pair had a discussion at the table and Gary revealed in his interview that Kyren was unhappy with his reaction following a specific shot.

Gary Wilson said: “To be honest he was quite serious. He was saying he thought my attitude was terrible when I left a red over the pocket. I had a joke with the crowd and it wasn’t against him. He said he could hear me banging about at the interval and it wasn’t the way to go on. I said that I was sorry if it affected him. I didn’t mean it like that and I’m allowed to release a bit of steam in the interval. Emotions get the better of us all at times. I certainly didn’t mean anything towards him about it.”

I’m very, very happy for Theppy whose ranking suffered a lot during the covid crisis and was in danger of relegation. Judd had made two centuries and breaks of 53, 52, 61 and 86 but still lost. That’s because he also made mistakes at crucial moments. He looked utterly devastated and barely able to speak when interviewed after the match. To his own admission he had many chances and didn’t take them. His final assessment of his performance was “Shocking”.

Gary Wilson deserved the win in the other match. Kyren’s reaction was a bit bizarre, but then, he had just lost from 3-1 up and he absolutely hates losing. 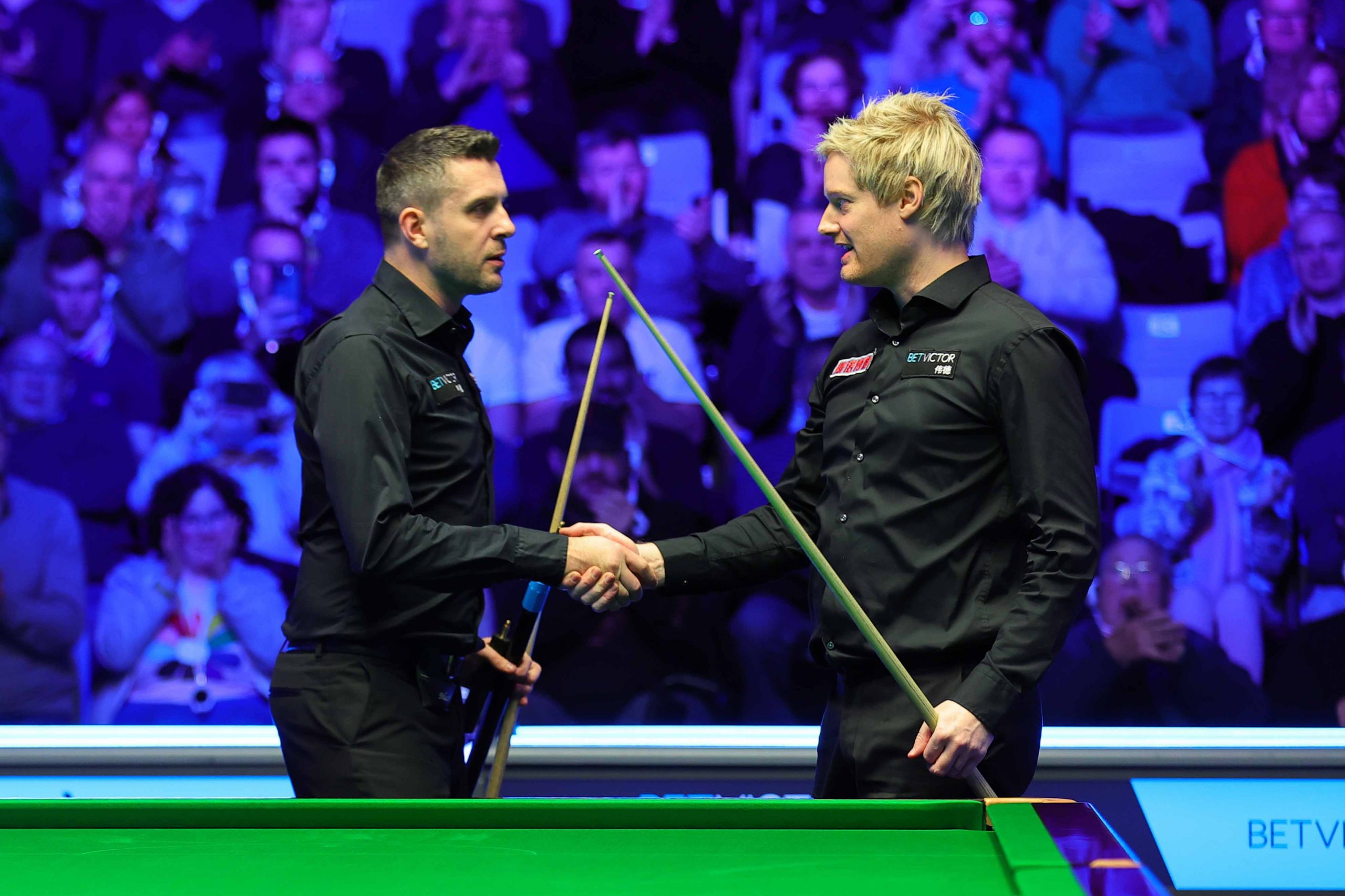 Neil Robertson scored his seventh consecutive win over Mark Selby, winning 5-2 to book his place in the semi-finals of the BetVictor Scottish Open in Edinburgh.

The last time Selby conquered Robertson was back at the 2020 World Championship, where he came through in the quarter-finals. Since then, 2010 Crucible King Robertson has embarked on a relentless streak against Selby, building a 17-8 lead in the head-to-head.

Robertson is aiming to pick up the Stephen Hendry Trophy for a second time this weekend. He was Scottish Open champion in 2017, when an extraordinary comeback in the final gave him the title. The Australian rallied from 8-4 down against China’s Cao Yupeng to win 9-8.

Selby is a two-time winner of the Scottish Open, having claimed the title in his first two appearances in 2019 and 2020. However, the four-time World Champion will have to settle for a spot in the last eight this time around.

Melbourne cueman Robertson put on a devastating display in the early stages this evening. Breaks of 133, 99 and 83 saw the Thunder from Down Under storm to a 3-0 lead. There was little Selby could do in the face of the Robertson blitz. However, he showed his typical steel with a break of 104 to head into the mid-session two behind at 3-1.

A run of exactly 100 saw Robertson re-establish his three frame cushion upon the resumption. Selby replied with 105 to stay alive at 4-2, but Robertson got over the line with 60 in the seventh to end a 5-2 winner. He now faces Joe O’Connor in tomorrow’s semi-finals over the best of 11 frames.

Robertson said: “The overall standard was fantastic from both of us. It was one of those matches where I seemed to be able to create the opportunity to have a look at a long ball. I was very accurate from range tonight and clinical when I knocked in the long reds. The momentum was always with me and I was very happy with how I played.

“There have been a few deciders (in his recent run against Selby) where we’ve both played brilliantly. A semi-final at the Champion of Champions comes to mind. There were a few deciders that could have gone either way if he got the first chance. It doesn’t mean too much. I don’t think top players look at the head to head.

“It would be nice to get the title. Winning the mixed doubles was great. Every top player just wants to win something. You don’t really care where it comes from or when it is. Now I want to push on and add more titles to the collection. In the next match I want to play really well and see where it leaves me.” 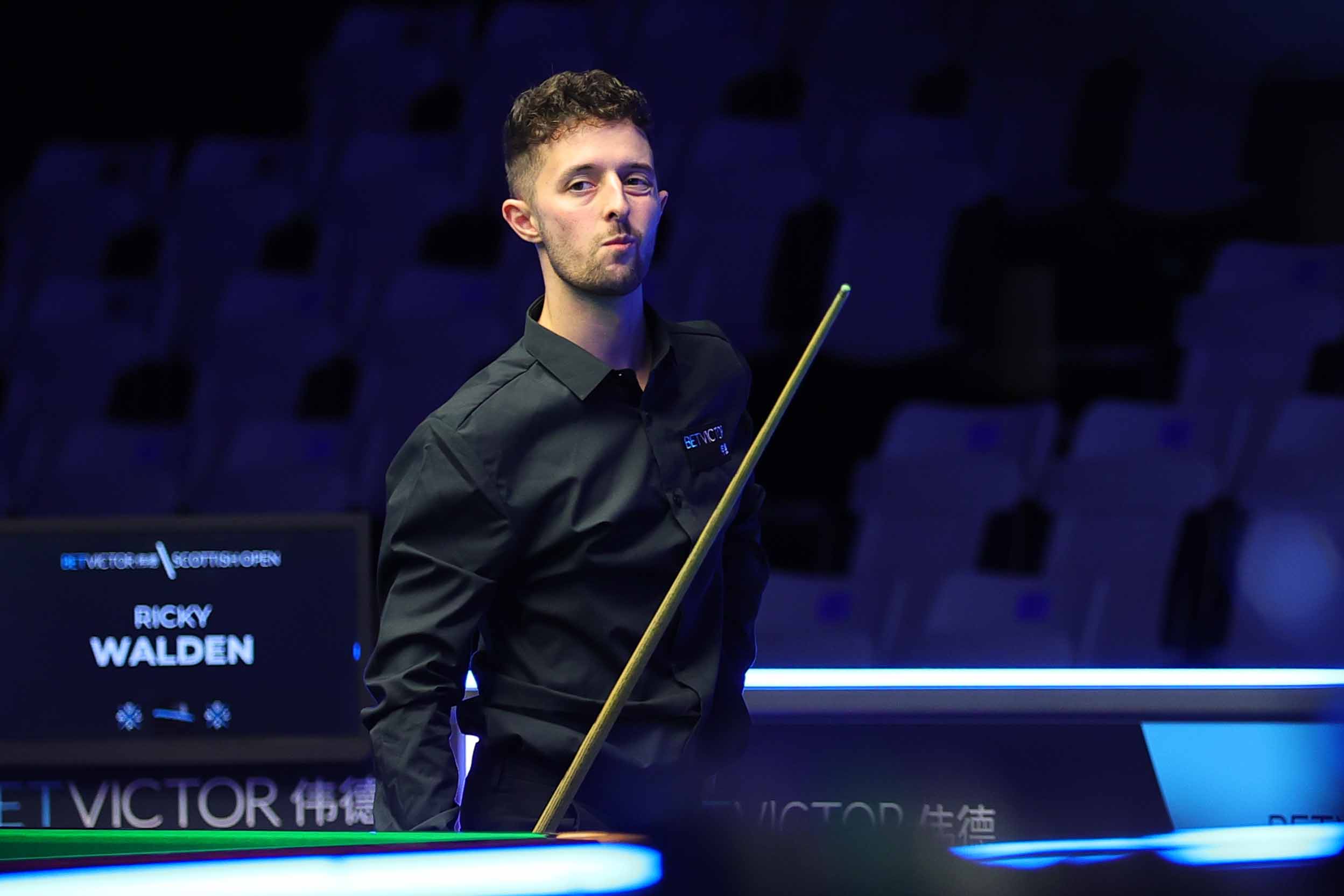 The Leicester cueman will appear in his second ranking semi tomorrow evening. The first came at 2019 Welsh Open, where he was beaten by Stuart Bingham.

O’Connor fired in breaks of 127 and 81 on his way to this evening’s win. Afterwards he admitted it would be a dream to win tomorrow evening.

O’Connor said: “It would mean everything to make the final. I’ve practised all these hours for God knows how many years now just to get a chance at winning a title. Hopefully I can play well again and have a chance.

“I looked over a couple of times tonight and Neil was clearing up. He looked like he was palying well. It was nothing different to what I would expect from Neil. I’m just going to concentrate on my own game and hopefully that’s good enough.”

There isn’t really much to add to this report. Neil Robertson was just incredible yesterday evening.

As for the other match, I did see nothing of it, so can’t comment on the action. From what transpired on social media, Ricky was not feeling great as he was battling the flu. That probably explains the very one-sided scoreline.

One thought on “2022 Scottish Open – The Quarter-finals”