Away from the awful news that made the headlines yesterday, there was a lot of action on the table too, including most of the held-over matches. Most of the top 16 went through albeit not always easily. The only notable exception was Stuart Bingham who was convincinly beaten 4-1 by Thepchaiya Un-Nooh.

Big Guns Fire On Day One In Brentwood 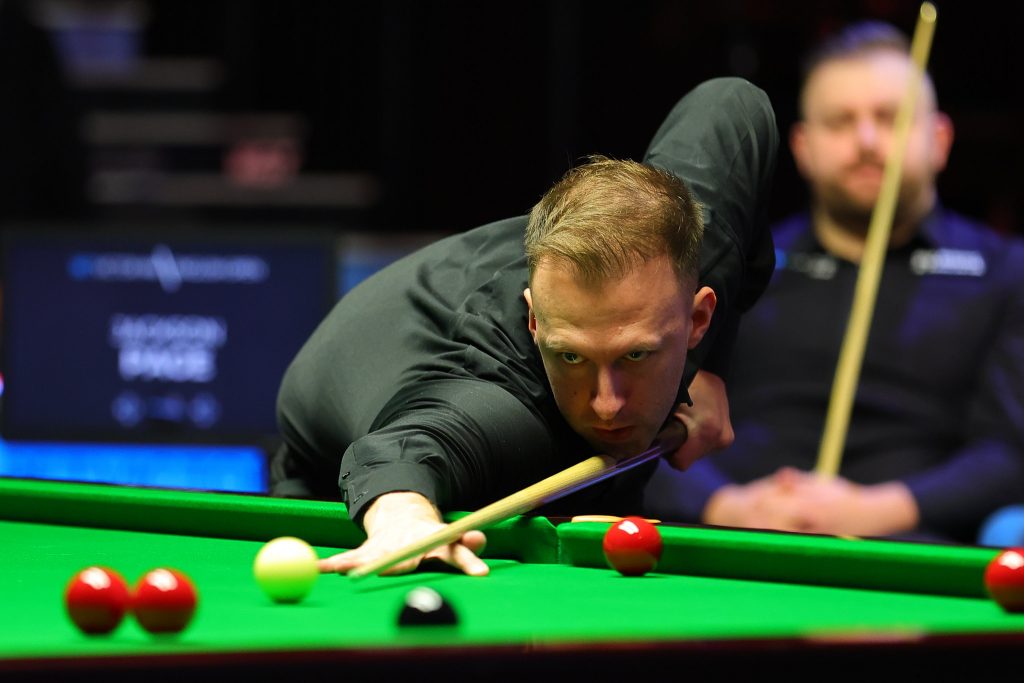 Judd Trump came through a tough battle against Jackson Page by a 4-3 scoreline on the opening day of the BetVictor English Open, while Neil Robertson, John Higgins, Mark Selby and Shaun Murphy also booked places in round two in Brentwood.

Page, ranked 65th, had a chance in the deciding frame to knock out Trump, but couldn’t take it and the world number two went through to the last 64 to face Craig Steadman on Tuesday afternoon.

It was a crucial bounce back for Bristol’s Trump as he suffered a painful 5-4 defeat against Thepchaiya Un-Nooh in the quarter-finals of the recent BetVictor Scottish Open. The 33-year-old is aiming to finish 2022 on a high having not won a title since the Turkish Masters in March.

Breaks of 69 and 60 put Trump 2-0 ahead, then Page fought back to 2-2. Frame five came down to the colours and Page got the snooker he needed on the blue, but then missed a double on the pink to a centre pocket and Trump potted it to regain the lead.

A run of 78 from Page made it 3-3, and the 21-year-old Welshman had first opportunity in the decider, but made only 28 before running out of position. Trump made 21 before losing position himself, but he got the better of a safety battle and added 45 for victory.

“I didn’t want to be going home today,” said Trump. “It could have been easier because at 2-0, Jackson butchered a shot but incredibly he got away with it, and after that the match changed. He made a mess of certain shots today but overall he has improved massively and he looks a tournament winner to me.”

Looking back on that match against Un-Nooh, Trump added: “I was so disappointed afterwards because I had chances in the last frame and didn’t take them. I have got used to taking chances under pressure so it was really tough to take.” 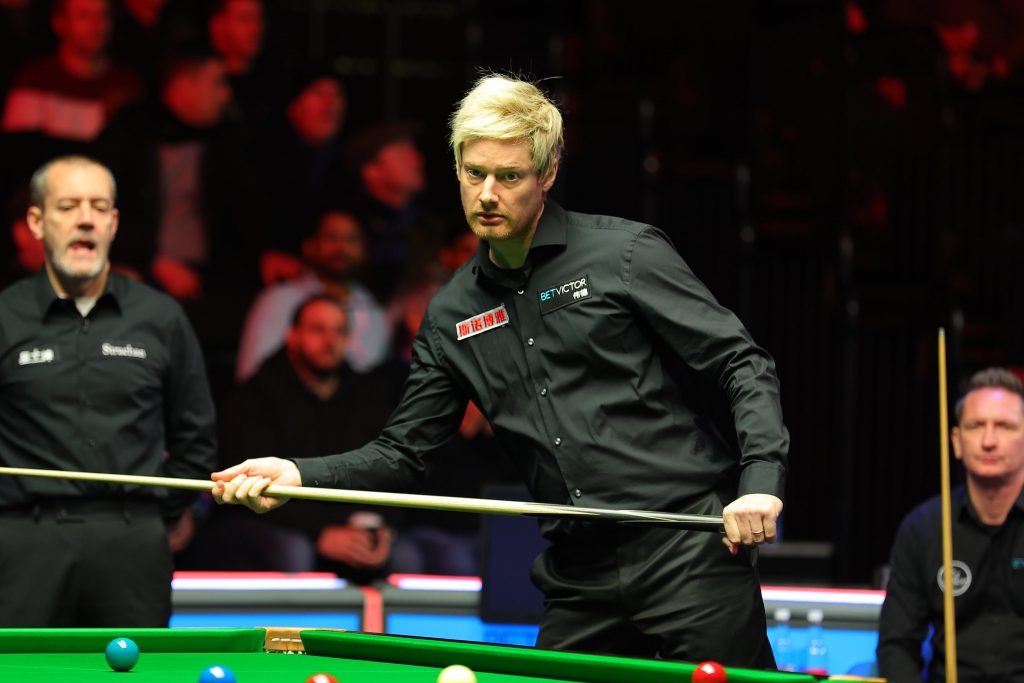 Higgins top scored with 74 in a 4-0 win over Gerard Greene. Four-time Crucible king Higgins must reach the final this week to get into the top 32 of the one-year ranking list and qualify for the World Grand Prix.

Murphy’s 4-2 win over Anthony Hamilton, highlighted by runs of 69, 51, 71, 78 and 111, was all the more impressive given that he had to travel though the night from his Dublin base. His Sunday evening flight was cancelled due to bad weather, so he had to return home, drive his car to catch a 2.15am ferry to Holyhead, then drive to Brentwood through snow and ice. “I can’t have slept more than two hours,” said Murphy. “It was a relief just to get to the venue and I’m delighted to play well and win.” 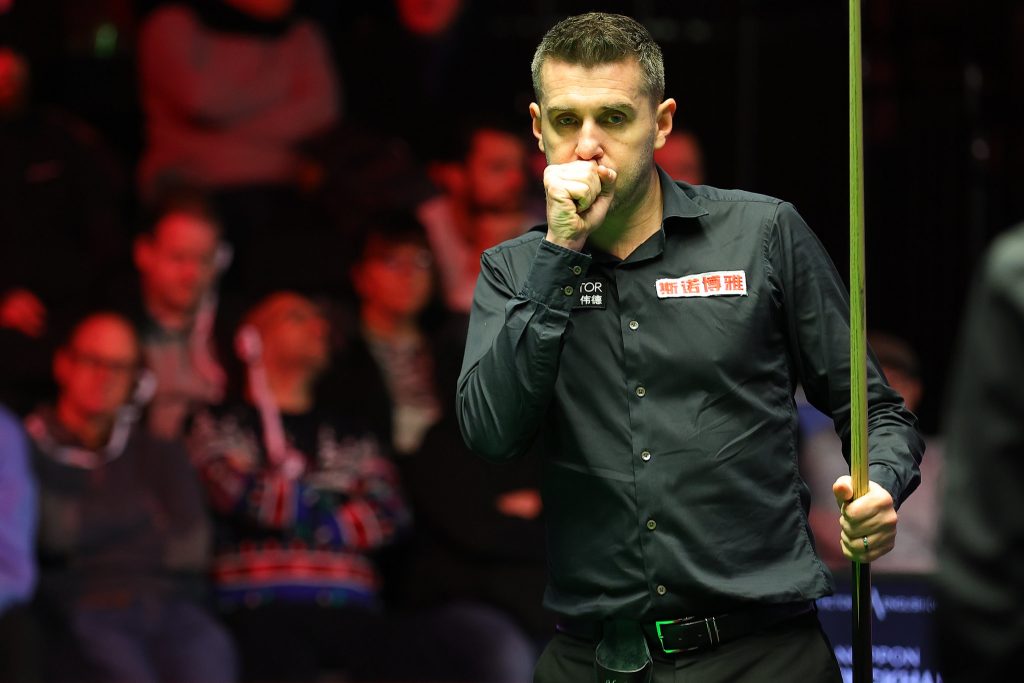 On a morning of heavy snow, Selby managed to freeze out Noppon Saengkham in the deciding frame, making a break of 128 to win 4-3. “I felt like the table was outside!” joked the four-time World Champion. “I was blowing my hands every other shot. Hopefully by my next match it will have warmed up.”

Selby now meets fellow Leicester cueman Joe O’Connor, who was runner-up in Edinburgh eight days ago. He added: “I was chuffed to bits for Joe. I texted him before the final to say good luck and enjoy it. He beat some great players to reach the final. I play him in practice and he can play to that level so it didn’t surprise me that much.”

Amateur Callum Beresford scored a surprise 4-1 win over Ryan Thomerson with a top break of 67. Zhao Xintong saw off Allan Taylor 4-2 while Luca Brecel made a 101 in the last frame to beat Mark Joyce 4-3.

Rocket: Sky Is The Limit For Mertens

Home favourite Ronnie O’Sullivan thrilled a capacity crowd at the BetVictor English Open in Brentwood with a 4-3 win over Ben Mertens, a player he describes as “a great cueist.”

Competing in the first ever ranking event in his home county of Essex, O’Sullivan was in danger of a shock exit when he was hauled back from 3-0 to 3-3, but he came through the decider to book a last 64 clash with charismatic Dechawat Poomjaeng on Wednesday. The Rocket is seeking his third title of the season having won the Champion of Champions and Hong Kong Masters.

Belgium’s 18-year-old Mertens, the European Under-21 Champion, could have taken the opening frame but missed the final yellow when he led 53-51 and his opponent went 1-0 up. World number one O’Sullivan then doubled his lead with a run of 81. Mertens could have cleared from 51-0 down in the third but failed to convert a straight-forward blue on 54 and soon found himself 3-0 behind.

The teenager’s fight back started with a break of 65, and he got the better of a scrappy fifth frame to close to 3-2, before making an excellent 73 to set up the decider. O’Sullivan scored 42 then missed a risky plant, and Mertens had a chance to counter, but made only 12 before losing position. World Champion O’Sullivan soon wrapped it up with a break of 63, but had some comforting words for Mertens.

“He’s a great cueist, he hits the ball well and I like his game,” 47-year-old O’Sullivan told Eurosport. “He’s young and he’s going to be around for a long time. The sky’s the limit. He has a snooker brain, he sees the shot and plays it. I want to see more players like that.”

Thepchaiya Un-Nooh beat Stuart Bingham 4-1, a vital result for the Thai as he had been ‘on the bubble’ in the race to qualify for the World Grand Prix, and the extra £3,000 lifts him a few places inside the top 32. . ..

Ricky Walden also improved his chances of a place in Cheltenham with a 4-0 success against Liam Highfield.

World number seven Wilson said: “It was nice to start with a comfortable win. My form has been very good for the last few events and I’m enjoying it. I had a 147 in an exhibition over the weekend which was a nice confidence boost.”

British Open champion Ryan Day made a 126 in a 4-2 defeat of Asjad Iqbal.

Here is some more about Ronnie’s match…

Those are the scores:

It was freezing cold in the arena because the heating system wasn’t working and it probably impacted all players and the playing conditions. It showed in this match and in other matches as well.

Here is the last frame:

It was an entertaining match and I think that Ronnie enjoyed it. He’s always happy to face a young talent. Ben certainly did despite the defeat if his reaction on Facebook is anything to go by.

Here some images of the venue …