Skip to content
HomeSPOTY Snub and other Snooker News

As I expected, Ronnie didn’t win SPOTY, he was not even voted into the top 3. Ronnie didn’t attend the show – he’s in Dubai – but he made himself available for a chat over the Internet. For once, snooker got more than a meagre 30 seconds of TV time… they got just above 6 minutes. Yeah! Not that it changed anything fundamentally….

Here is what Ronnie had to say as reported by Eurosport

Ronnie O’Sullivan will be chasing history – a record eighth world championship title – if he plays at the Crucible next year, but the 47-year-old said that winning it will be far from a formality. O’Sullivan was speaking at the BBC Sports Personality of the Year awards, where he was nominated for the overall individual award.

Ronnie O’Sullivan says he will have to “wait and see” about a tilt at an eighth World Championship title, saying that it will depend upon “timing and form”.

But talking at the BBC Sports Personality of the Year award – where he was one of the nominees for the overall individual award – O’Sullivan said going for an eighth is not a formality, especially given his age of 47.

“When I first turned pro I was happy with one [world title],” O’Sullivan told host Gary Lineker.

“That was my dream, to win one World Championship. I always remember that and I never try to get greedy. Anything after one, two, three or even four you just kind of go ‘well each one is a bonus‘.

“If I was to get an eighth that would be fantastic but it’s really tough these days. There are a lot of good young players coming through, there’s a lot of good talent and I don’t know if age is catching up with me.

“We have to wait and see. I think a lot of it is a bit of luck, timing.

“I don’t know if I’m going to go for an eighth but I’ll have a good idea come a week before [worlds venue] the Crucible whether I’m in good enough shape to do it. If I am then it’s on, but it’s just all about timing and my form has to be good.

O’Sullivan was asked about his memorable, lengthy embrace with finalist Judd Trump after his latest Crucible win, and admitted it was to do with the effort required to have won the tournament.

The Rocket said: “In many ways at my age I was just more tired the last two world championships I won – 2020 and 2022 – I just felt so much more tired getting over the line when just physically I didn’t feel like I had it in me.

“The enormity hits you a bit more when you think physically I just don’t know how I did it. Before I felt quite comfortable. All of those feelings hit me at once.“

O’Sullivan, though not there in person, was among sporting royalty at the BBC event, and opened up on how he has been able to perform for so long at the top level, especially in the worlds.

“I feel it’s a combination,” he said. “The top players rise to the biggest occasion and the ones who feel the pressure a bit more don’t perform as well at the Crucible.

“The Crucible is a venue like no other. The pressure that it provides can make you or break you and that’s why you get a lot of the same type of winners: Me, Hendry, [Steve] Davis, [Mark] Selby, [John] Higgins, [Mark] Williams, because we perform a lot better under the pressure than the other guys, so I think it’s a mixture of both really.“

Here is Ronnie’s bit in the show …

It doesn’t come to surprise to me at all, alas. Even before the show, twitter was full of “scorn”… guys arguing that snooker isn’t even a sport, but just a pub game. In many ways, snooker’s poor record in SPOTY in the last two decades is a reflection of that perception. Becoming an olympic sport would probably help. Also snooker is not perceived as being physically demanding. Ok, it’s not requiring a lot of physical “brute force”, but it requires huge eye/hand coordination, tactical nous, control over the emotions, sustained concentration. Last time I checked, my brain, eyes, hands and nervous system where still part of my physical person.

I believe that there are two main factors “working” against snooker: unless you actually understand the game, it’s not spectacular and it’s not, in essence, a team sport. The first factor means that the casual viewer rarely gets “hooked” on it and the second factor means that it doesn’t particularly appeal to the “tribal” side of the human nature. The latter was the key factor contributing to Beth Mead’s win this year IMO. There is a third element that probably plays a role too. SPOTY is a BBC thing, and BBC only shows three snooker events nowadays. OK, they are three big ones, most notably the World championship, but there are also very long periods of time during which they barely show a thing or speak about any of it, unless there is some scandal affecting the sport.

The format for next month’s World Grand Prix in Cheltenham is now confirmed, with star names including Ronnie O’Sullivan, Judd Trump, Mark Allen, Neil Robertson and Mark Selby in the line up.

The top 32 players on the one-year ranking list qualify for the first event in the 2023 Players Series, to run from January 16 to 22 at the Centaur Arena at Cheltenham Racecourse.

Defending champion O’Sullivan meets Barry Hawkins in the first round on Tuesday January 17th at 7pm. In the same evening session, Judd Trump is up against Shoot out champion Hossein Vafaei.

Mark Allen, leader of the one-year list, is up against David Gilbert on the opening night, Monday January 16th at 7pm.

The first round draw and schedule is below, see the format link above for the schedule for the second round onwards.

The tournament will be televised by ITV and a range of other broadcasters worldwide. It’s the first event in the 2023 Players Series, to be followed by the Players Championship in Wolverhampton and the Tour Championship in Hull.

Joe Perry will begin the defence of his BetVictor Welsh Open title against Mark King in February when snooker’s greatest stars head to Llandudno.

The draw for the tournament has been made, with the qualifying rounds to run from January 11 to 13 in Barnsley, followed by the main event from February 13 to 19 at Venue Cymru in Llandudno, North Wales. 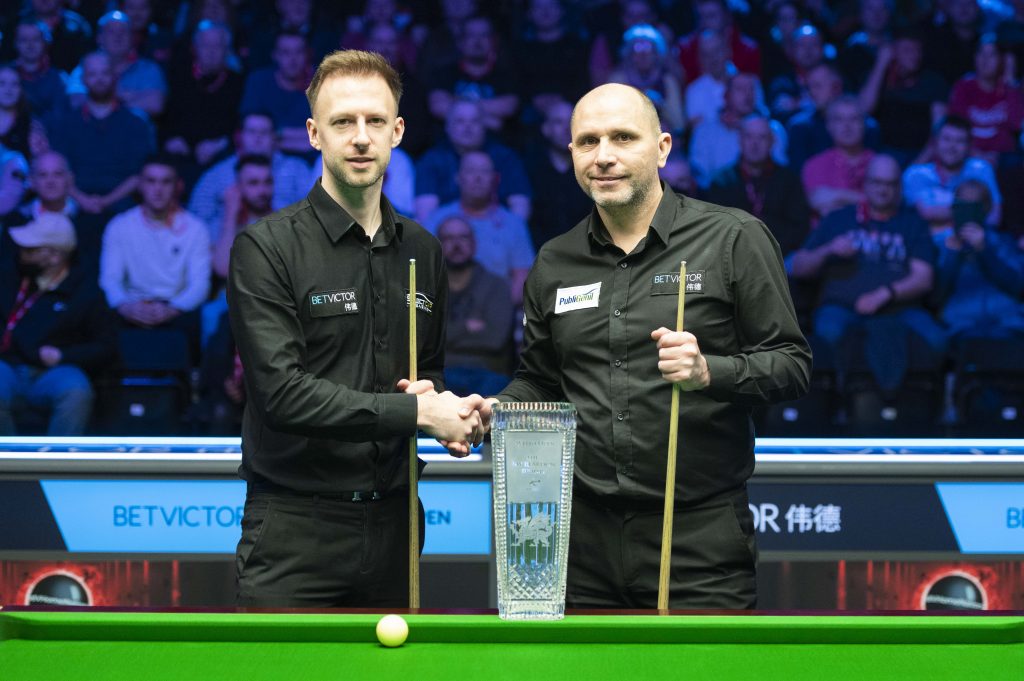 Perry won a ranking title on British soil for the first time when he beat Judd Trump in the final in Newport last season, and he’ll be up against King in round one in Llandudno. World Champion Ronnie O’Sullivan will meet Oliver Lines, while three-time Crucible king Mark Williams will face Michael White in an all-Welsh clash.

Other great names in the field include Trump, Mark Selby, John Higgins, Neil Robertson, Shaun Murphy, Mark Allen and Kyren Wilson. Matches involving the top 16 seeds have all been held over to the venue in Llandudno, as well as two matches involving the national wild cards. They are:

Liam Davies, age 16 from Newport, will face Noppon Saengkham in the first round. Davies has won multiple World and European titles at junior level, and last season he became the youngest player to win a match in the World Championship.

Oliver Briffett-Payne, age 17 from Risca, will face Robbie Williams in the first round. Briffett-Payne is a regular finalist in junior ranking events and captained Wales Under-21s at the Home Internationals in 2022.

The Welsh Open has been ever present on the snooker calendar since 1992 – the sport’s longest running ranking event other than the World Championship and UK Championship. It has an international television audience of hundreds of millions, with live coverage from broadcasters including Eurosport, discovery+, Quest, BBC Wales and CCTV5 in China.

It is the last in the season’s  BetVictor Home Nations Series, and also the last event in the 2022/23 BetVictor Series, with the money-list leader at the end of the week to collect a huge £150,000 bonus.

Details on the match schedule for Llandudno will be announced soon.

7 thoughts on “SPOTY Snub and other Snooker News”