Mark Williams had not beaten Ronnie in a Triple Crown event since the 2000 UK Championship, and had lost in a deciding frame the two previous times they had met in the Masters, but today he won their quarter final match … in a deciding frame.

Willo actually fancied his chances ahead of the match, despite the head-to-head. Top players do know when they are playing well and Mark is certainly playing very well right now.

Ronnie had no complaints. Here are some reactions by top sports journalists on twitter:

The scores above show what Ronnie means by “not scoring well enough”. Mark had 6 breaks over 50 in the match, Ronnie had “only” three 50+ breaks. Basically, every time Mark Williams got in the balls, he won the frame in one visit.

And by Ronnie himself

The London crowd was very fair and supported Mark as well as Ronnie. It was actually an excellent match overall. Both players had over 90% pot success, and Ronnie had actually better stats in the long pot success, and safety success but that counts for nothing as Mark made less errors at crucial moments and scored better. I hope that he now goes on to win the tournament.

And some images of the event shared on social media

Mark Williams beat Ronnie O’Sullivan in a Triple Crown event for the first time in 23 years, winning 6-5 in a mesmerising quarter-final clash at the Cazoo Masters.

Williams made two centuries and four more breaks over 50, coming from 3-0 and 4-2 down in an epic battle at Alexandra Palace, watched by 2,000 fans who gave both players a standing ovation at the start of the contest. It’s the Welshman’s first win over O’Sullivan since 2014, and first in a Triple Crown event since the 2000 UK Championship semi-finals.

The 47-year-old is the first man into the semi-finals in London and will meet Jack Lisowski or Hossein Vafaei on Saturday at 1pm. Champion in 1998 and 2003, Williams is into the last four of this event for the sixth time and second consecutive year.

O’Sullivan misses this opportunity to become the first player to win a Triple Crown event on eight occasions; he remains on seven titles apiece at the UK Championship, Masters and World Championship. Spurred on by an enthusiastic crowd, he looked strong in the early exchanges but was outplayed from 4-2.

World number one O’Sullivan made a fine start with a break of 115, then dominated frame two and made a 79 in the third for 3-0. In frame four, O’Sullivan led 31-16 when he ran out of position, and Williams gained a foothold by clipping in a long red to initiate a break of 55. After the interval, the Welshman compiled a break of 83 to draw within a frame at 3-2.

O’Sullivan got the better of frame six to double his advantage, then world number seven Williams responded with a fabulous 143 total clearance, the new front-runner for the £15,000 high break prize. A run of 90 from the Cwm cueman levelled the tie at 4-4. In frame nine, O’Sullivan was 50-1 ahead when he missed a tricky red to a centre pocket, and his opponent took advantage with a tremendous 59 clearance to go ahead for the first time. Back came the Rocket with a run of 77 to set up the decider.

World Champion O’Sullivan had one early chance but missed the black after potting the first red. Williams made 30 before running out of position, but got back in with a delightful long red and sealed the result in style with a 102. 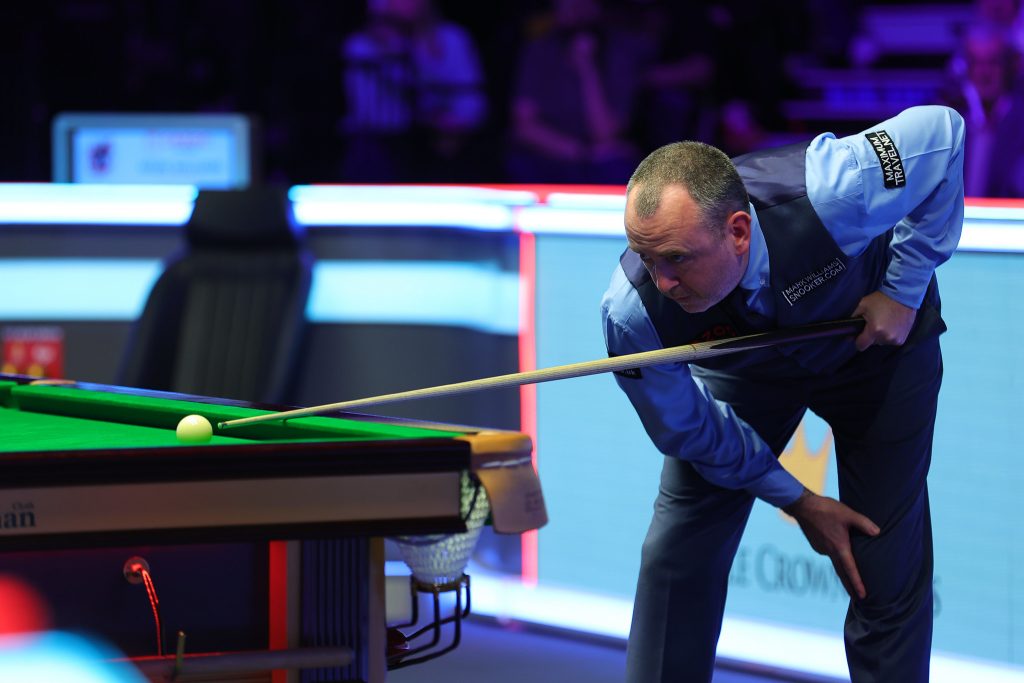 “I have been on the wrong end of so many deciding frames, it’s nice to finally win one, especially against Ronnie,” said Williams. “For the first three frames he was magnificent, his safety and break-building, I was thinking it could be 6-1 or 6-0. Then I made a nice break for 3-1 to stick in there. I got back into it, put pressure on him and he started to miss a few. I made a really good clearance to go 5-4 up and a century in the last frame – it’s nice to know I can do that when I need to.

“The crowd was unbelievable. We had a second standing ovation before the last frame. I was trying my guts out, and for the first time ever against Ronnie, I felt the crowd turned and most of them were behind me. I have never felt that before, and that gave me a lift and maybe put more pressure on him.

“Overall my form is really good, given my age. I’m not going to improve at this stage of my career. It’s only you (the media) who keep reminding me I haven’t beaten him for a long time! If my bogey player is the greatest of all time then I’ll take that on the chin.”

O’Sullivan said: “The snooker Gods did the right thing today, it would have been a liberty if I had won that match. He was by far the better player and deserved to win. I didn’t score – I was only making bits and pieces and missed a few easy balls. You shouldn’t win matches at this level when you don’t make breaks. I competed today and couldn’t give any more, but if the breaks aren’t going in then you have to fall over the line or hope your opponent makes mistakes. It nearly happened but I didn’t have enough.”

And some more quotes reported by Hector Nunns, writing for “The Sportsman”:

… said: “I hadn’t beaten him in the UK in a major tournament for 20 years, or a Triple Crown event for 23 years, or in anything for nine years as people kept telling me.

“But that’s gone now and if I don’t beat him for another 20 years I couldn’t give a whatever. It was brilliant.
“Everyone has a bogey player and if mine is the greatest player that has ever lived, then I can handle that. But this has to be one of my best and most satisfying wins.

“I just really fancied beating him today, even if that sounds funny. Obviously at 3-0 down it’s not looking so good.

“The first three frames he tied me up in knots and I didn’t have a shot. But I felt even the crowd swaying towards me at the end and you never normally get that playing Ronnie in London.

“I still think my eyesight is not as good as it was though and I might consider laser eye surgery after the World Championships.“

O’Sullivan said: “The snooker gods got it right today, Mark was by far the better player and it would have been a travesty if I had have won.

“I just didn’t score or make my breaks from 3-0 and you cannot make that many mistakes and expect to best a player of Mark’s class. I battled and was happy to get it to 5-5 before missing the black in the decider.

“Mark has been playing well for a long time since he won that world title, and I hope he goes on and wins this now because he deserves it.“

The watching BBC pundit and three-time Masters winner Steve Davis said: “That was a truly special match between two of the greatest players we have ever witnessed.
“You have to savour these matches…the Class of 1992 with these two and John Higgins won’t be around forever.“

And speaking to Eurosport, Mark Williams said something interesting, illustrating the importance of psychology in snooker

“I was three-nil down, it was just brilliant and flawless stuff he played. I mean I’m a good safety player – pretty good – but he tied me up in knots. It was just perfect snooker

“But I came back well and put pressure on him and he started missing a couple of, not easy ones, but I could see in his face that he was starting to get a bit uptight and I thought, ‘oh come on you got a chance here’.

“He put the pressure on in the first session, and then I put it on him and I made a cracking century to finish it off.”

Why would Ronnie get uptight you will ask me. Well he hasn’t got the better season so far, and his confidence is probably not very high. Also, he is, by nature, an anxious person. Many believe that confidence does come automatically with success but it isn’t that way. Persons who are anxious by nature will remain prone to self-doubt and anxiety, no matter how successful they are. And, actually, I could see it on Ronnie’s face myself, right from the start of the second mini-session.