At the time of writing, the Championship League Snooker 2020 Group 7 is underway, with the play-offs to be contested between John Higgins, Graeme Dott, David Gilbert and Mark Williams.

Earlier this week, the last two events of the Challenge Tour 2019/20 were played. Ashley Hugill topped the rannking list, but, as he already got his tour card back by winning the WSF event in Malta, it’s the runner-up, Lukas Kleckers who gets the first tour card avzailable through the Challenge Tour. 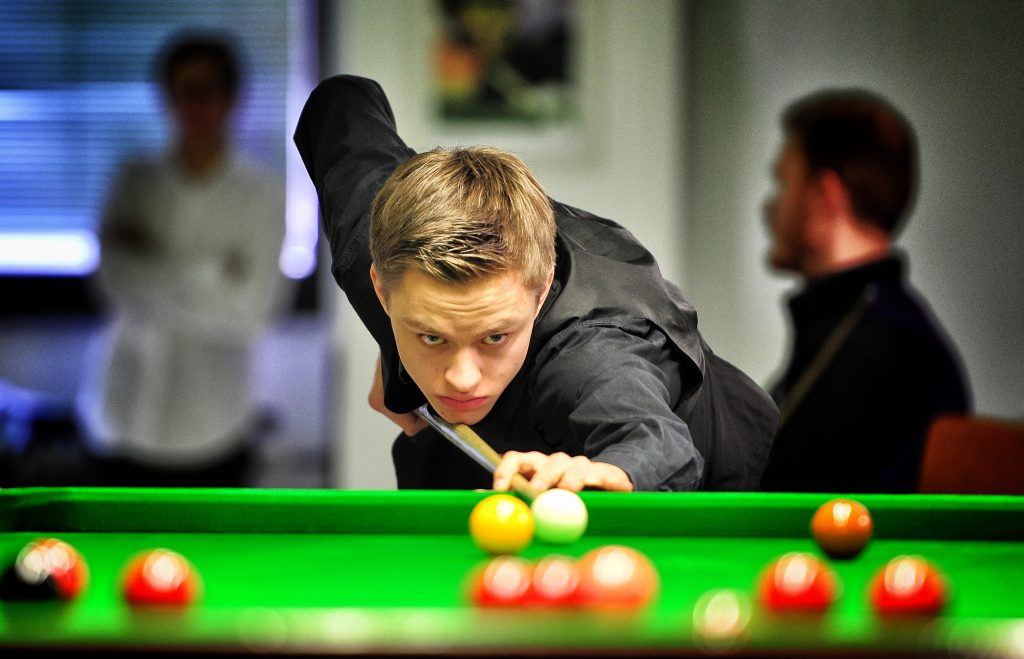 Germany’s Lukas Kleckers has earned a place on the World Snooker Tour for the next two seasons thanks to his performances on the 2019/20 Challenge Tour.

Kleckers, age 23 from Essen, finished second in the Challenge Tour rankings after ten events, behind only Ashley Hugill. Englishman Hugill had already secured a tour card by winning the World Snooker Federation Open in January. So Kleckers was next in line to earn the automatic tour place available from the Challenge Tour.

Players ranked third to tenth in the Challenge Tour rankings will qualify for the Play Off tournament on March 29th in Clacton. The winner of that event will also earn a World Snooker Tour card for the 2020/21 and 2021/22 seasons.

Kleckers won Challenge Tour event eight in Tamworth in January. He also reached the semi-finals of three other events and has now been rewarded for his consistency.

At the age of just 17, Kleckers won the German national Championship. He turned pro in 2017 after coming through Q School and competed on the pro tour for two seasons. He has reached the last 32 of five ranking events, including the Riga Masters three times, and scored wins over the likes of Neil Robertson and Thepchaiya Un-Nooh.

WPBSA Chairman Jason Ferguson said: “On behalf of WPBSA and WST I’d like to congratulate Lukas for his superb performances on the Challenge Tour this season. He fully deserves his place back on the World Snooker Tour and we look forward to seeing him compete at the top level over the next two seasons.

“Snooker has grown dramatically in Germany over the past decade and we are delighted to see young talent like Lukas coming through and enjoying success. I hope his achievements will be an inspiration for young players across Germany and further afield.

“The standard of play on the new Challenge Tour this season has been outstanding and it provides a platform for developing talent to thrive and chase their dreams. The Play Off event later this month will feature eight fantastic players with a huge prize at stake. Let the best man win!”

Lukas’ first experience as a pro was quite disappointing and it will be interesting to see if competing in the Challenge Tour has helped him to make the improvements he needs.

A second tour card will be given to the winner of the play-offs event. The eight players competing in this one are Andrew Pagett, Dean Young, Rory McLeod, Oliver Brown, Ka Wai Cheung,  Alan Taylor, Jake Nicholson and Patrich Whelan, in order of Challenge Tour rankings.

Ronnie O’Sullivan’s latest world title bid will not be burdened by great expectations which may just work in his favour, writes Desmond Kane.

It was a year ago that Ronnie O’Sullivan claimed he did not participate at the impending Gibraltar Open because he “would rather sleep in a pig sty”. His critics might suggest he has already made a pig’s ear of this season with only the World Championship next month offering any form of redemption in what is left of a fairly underwhelming campaign for snooker’s Rocket Man.

1,302 people are talking about this

O’Sullivan’s inability to win a ranking tournament, his commitment to avoid any events he does not fancy and a few indifferent results has left him snookered in the death throes of this season. He even participated in the lottery of the Snooker Shoot Out last month in his quest to boost his season, but defeat to world number 110 Billy Joe Castle in the second round has left the five-times world champion on the outside looking in.

Outside of the top 16 in the one-year ranking list, he did not qualify to defend his Players Championship won by Judd Trump on Sunday and the knock-on effect sees him miss the defence of the Tour Championship (March 17-22), involving the top eight in the world after the Gibraltar Open (March 11-15), an event O’Sullivan views about as dimly as prize money for a 147.

With the China Open cancelled due to the coronavirus crisis, O’Sullivan has time to play a few exhibitions, he is in Derry this week, and ready himself for his latest trip to the World Championship (April 18-May 4). When he washes up in Sheffield this year, he will have last played a competitive match against Castle on February 22.

Will it hamper his bid to claim a sixth world title seven years after winning a fifth title at the bow-tied torture chamber? Unlikely. He has previous with this narrative.

He infamously took a season off after lifting the world title in 2012, he worked in a pig sty believe it or not, before successfully defending the old pot a year later. He has not been back to the final since losing 18-14 to Mark Selby in 2014, but still has the potency to go deep into the tournament this time despite his apparent travails.

Overcoming firebrands like the outstanding world champion and world number one Judd Trump, who has already claimed five ranking titles in a fabulous coming-of-age campaign, and Neil Robertson would be his greatest achievement in the sport. Yet even at 44, it would be dangerous to describe O’Sullivan as an also-ran at a venue where curious happenings can develop over an elongated 17 days.

In his favour, he should be a fresh beast and perhaps a dangerous animal in Sheffield. He will not head there burdened by high levels of expectancy.

A year ago, he travelled to Sheffield in prime form having lifted three ranking events including the UK title, and was promptly bounced out 10-8 by then amateur James Cahill in arguably the greatest shock in the event’s history. Amid getting a buzz cut during the contest, he cut a fatigued figure at the end, left frazzled by a touch of the cold and a miserable level of green baize malpractice.

Trump plays the game on a different planet these days, but O’Sullivan on his day remains firmly in his orbit.

He lifted the elite invitational Shanghai Masters with a 11-9 win over Shaun Murphy in September, and narrowly lost the Northern Ireland Open final 9-7 to Trump.

It would be a typical denouement to such a season if O’Sullivan emerges victorious clasping the old pot. Whatever else is made of O’Sullivan’s season, it is not a fanciful nor a romantic notion from a 28-year career based on high levels of unpredictability.

There is one thing in this article I fully agree with: coming to Sheffield with no expectations on his shoulders could help Ronnie massively. The last two World titles came when nobody expected him to win. In 2012 he only just had avoided the qualifiers and his whole season had been marked by ilnesses (hence withdrawals) and a number of early defeats in the major events. In 2013 he had only played one match all season, in a PTC, and had lost it. The last two seasons have been the complete opposite: they were outstanding, with record breaking performances … until the Crucible. That said, I’m not overly optimistic.

Regarding the other contenders, and Trump in particular, it could play the other way around. All the media attention will be on Judd Trump, all the hype and pressure. If this season UK Championship and Masters are anything to go about it might be his undoing. The early rounds will be telling.